In earlier blog posts, I described how we got started in flying dual-line kites, and our first experiences flying as a pair. The third key step ultimately leading to our Festival début came in the shape of two people. To be more precise, it came in the shape of Allan and Marilyn Pothecary, aka Close Encounters.

It must have been the second time that we met up with Roger, Tony and Neil at Stokes Bay that Tony mentioned a Better Flying Day, to be run by Allan and Marilyn at Stokes Bay in a week or two. Wouldn't cost anything, all you'd need to do is show up. That sounded like a good deal, so we duly arrived at Stokes Bay two weeks later. After introducing ourselves to Allan and Marilyn, and making clear that we had barely done any team-flying, Allan asked what kites we had. We had brought our Fish & Shark kites, of course, plus a few others, among which was a Prism Hypnotist. Allan was, shall we say, 'underwhelmed' with the Fish & Shark kites, and pulled out a Prism Mirage to match our Hypnotist. But first, using two of their Eolo Over kites on 40m lines, he took us both separately through some pair-flying basics: infinities, ground pass, boxes; and how to call and react to calls. 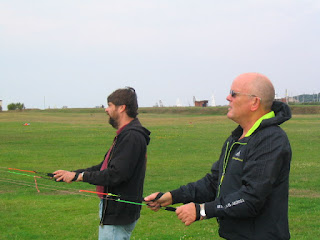 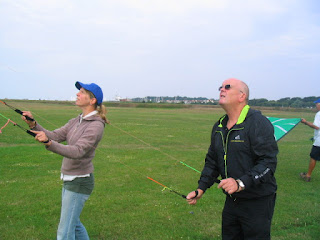 And then it was practice time! Using our Hypnotist and Allan's Mirage, we tried out these basics with the two of us, which wasn't the easiest of things. 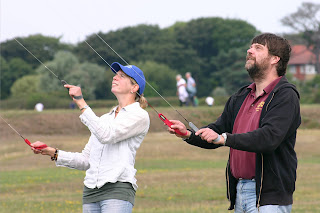 Also, we had to go back to our own 25m lines, as Allan needed the 40m lines for the next few flyers to be instructed. Going back from 40m to 25m really showed how important long lines were for pair/team-flying! 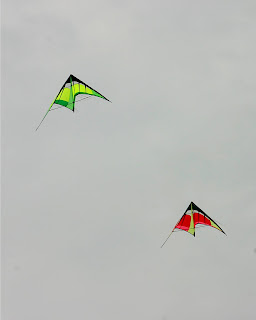 But we tried, and definitely showed improvement over the few hours we were there. We went home excited, and immediately ordered lines and related stuff to make ourselves two sets of 40m lines. 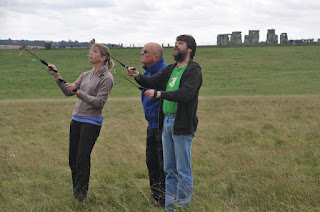 About a month after this Better Flying Day, Allan invited us over to one of their flying sites near Stonehenge for some more flying instructions. We had done some practicing in the mean time, and he first cast a critical eye on our flying progress, with us flying the Hypnotist-Mirage pair of kites again, but now on our own 40m lines. 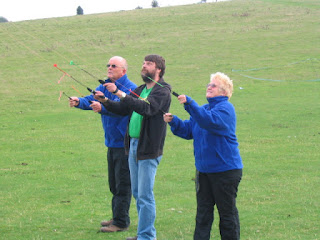 Next up was flying in a team of three! Back to Eolo Overs. Main difficulty for us now was to keep track of which kite we were flying ... 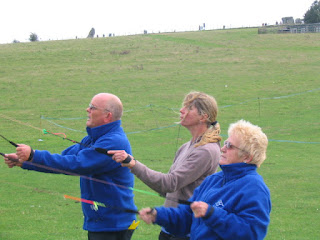 And to make life a bit more interesting, Allan now started to throw in more commands, including for several patterns we'd not flown before, and were only explained seconds before execution! 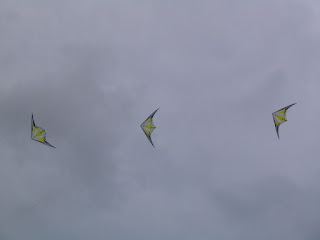 But we survived without too many problems. And if flying in a team of three wasn't exhilarating enough, we then went to flying with all four of us. With more kites in the same area of sky, trying to keep track of what your own kite is and where you need to go next, and not crash into the other three kites, with all kites flying at speed, was a big challenge, but it also left us with a real buzz being able to fly in a team of four! Sorry, no pictures of the 4-strong team, as flying in a team of four and taking pictures at the same time was a bit too much of an ask ...


Since these two days, we have flown with Allan and Marilyn on several occasions, including an 8-kite mega-fly, which I'll say more about in a future blog post. But first, a big public THANK YOU to Allan and Marilyn. Guys, without your enthusiasm, support and motivation, we wouldn't be where we are now! 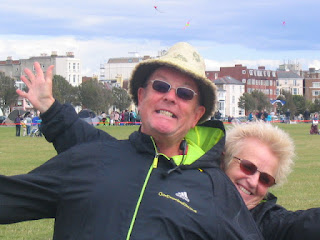 Pictures of us flying the Hypnotist and Mirage were taken by Roger. The picture of Allan critically looking over our shoulders was taken by Marilyn.
Posted by flyingfish at 07:45