After flying our new T5 Taipan Standards last week, the wind was perfect yesterday for trying out our new vented T5 Taipans. At first, the wind was around 15mph on average (though quite blustery), so out came the V1s! 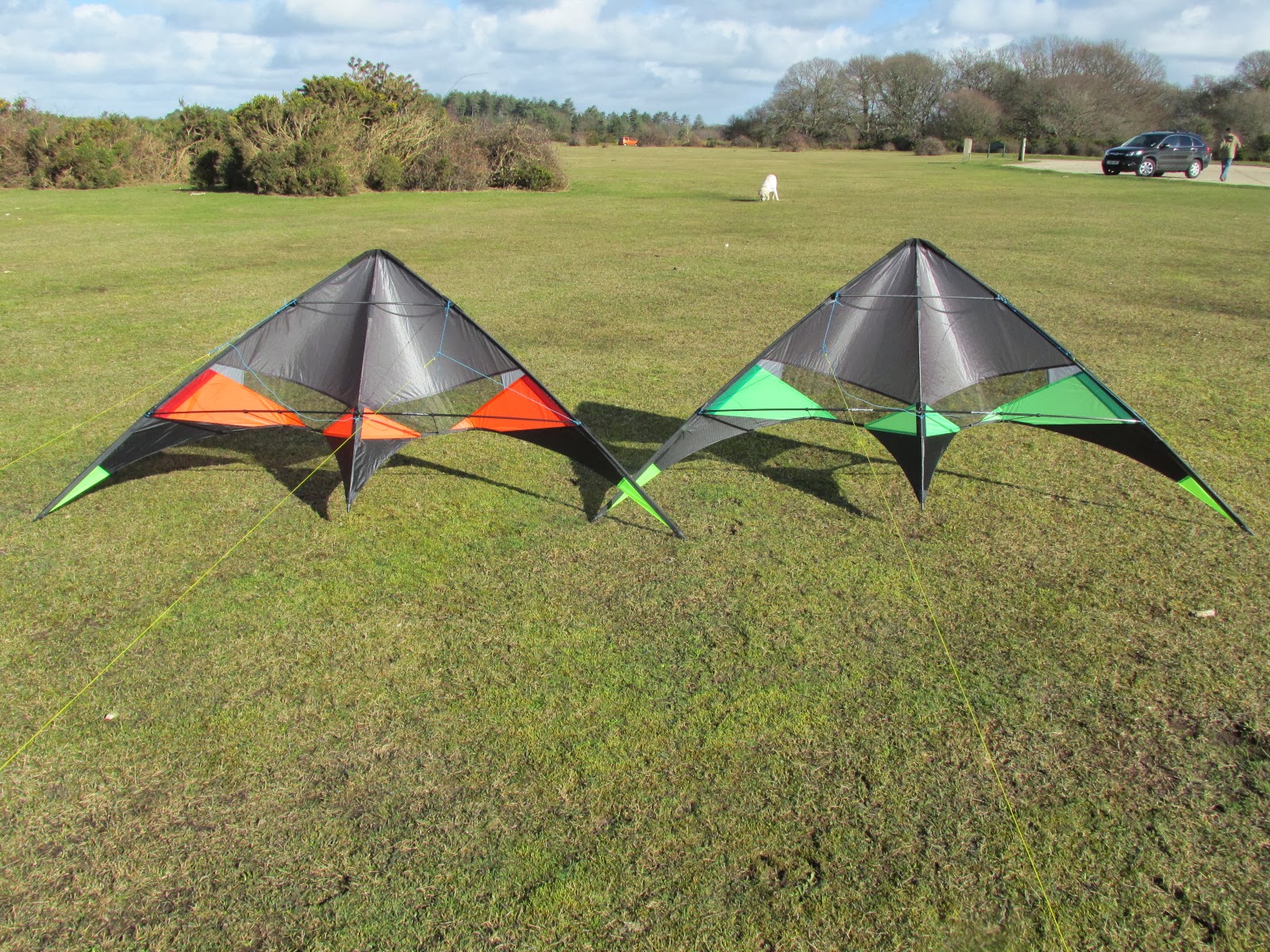 As with our Standards last week, the V1s proved very responsive to input, and a pleasure to fly. 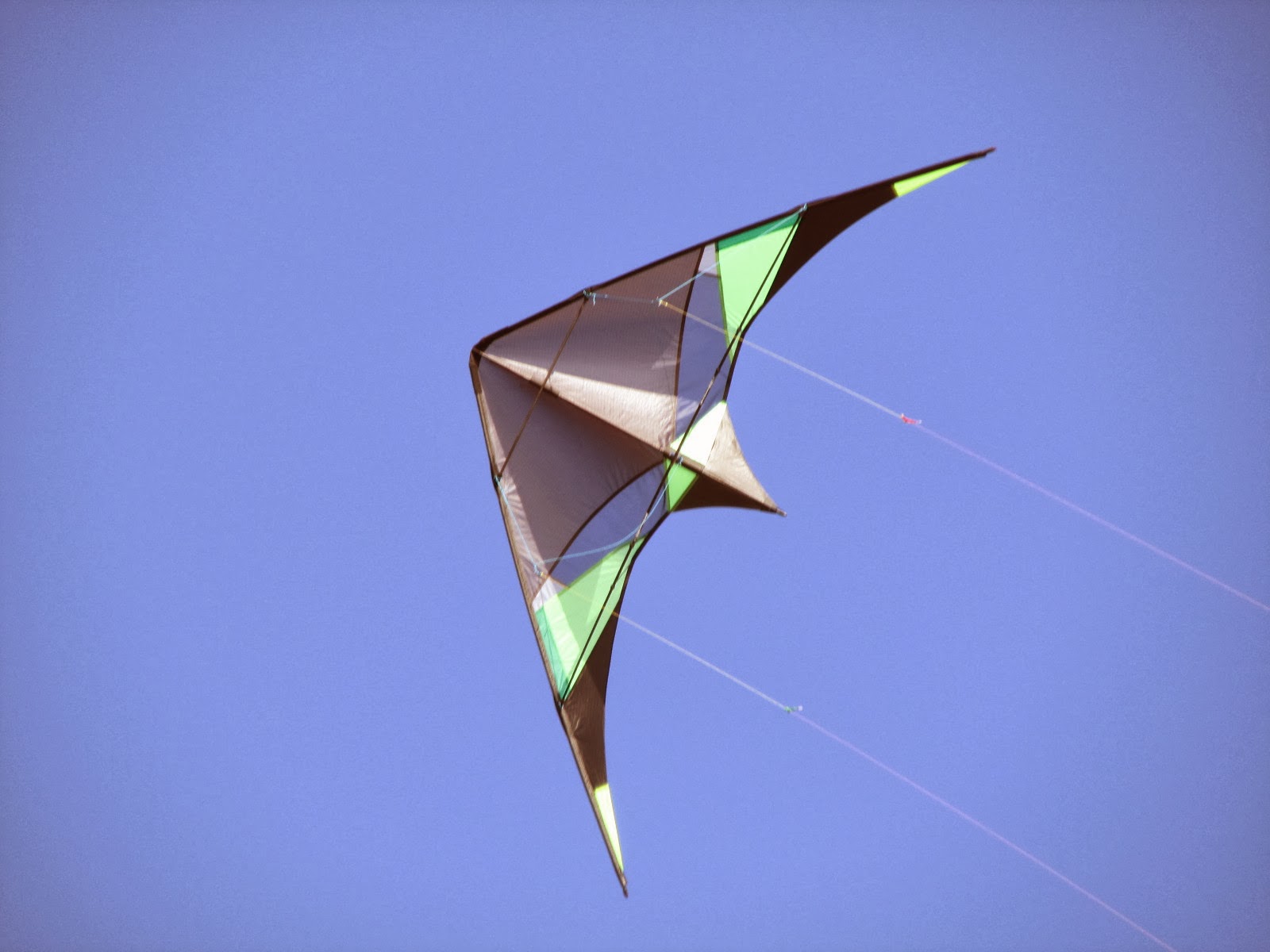 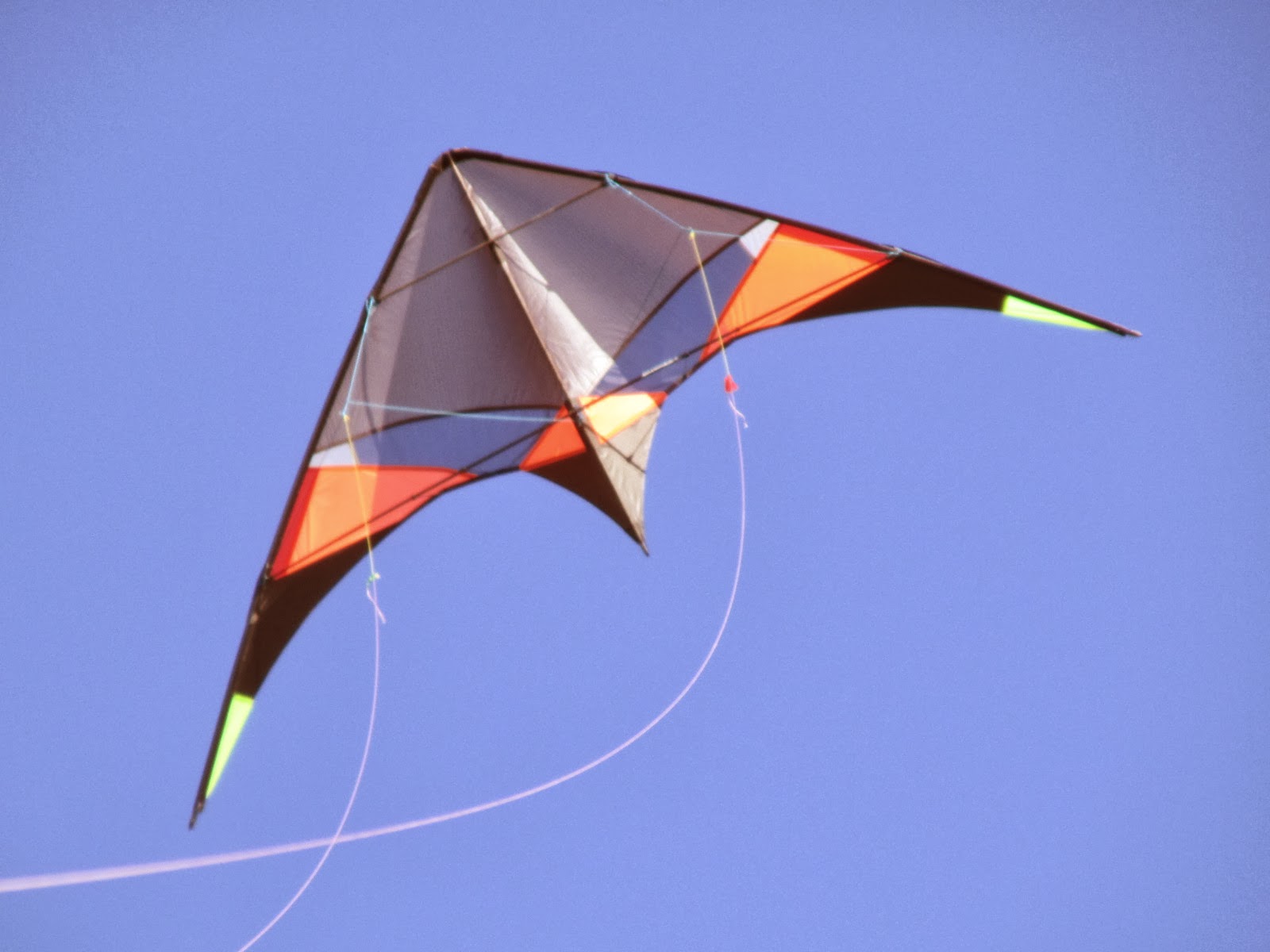 Very much the same feel on the lines as the SULs and Standards; they clearly came from the same stable! 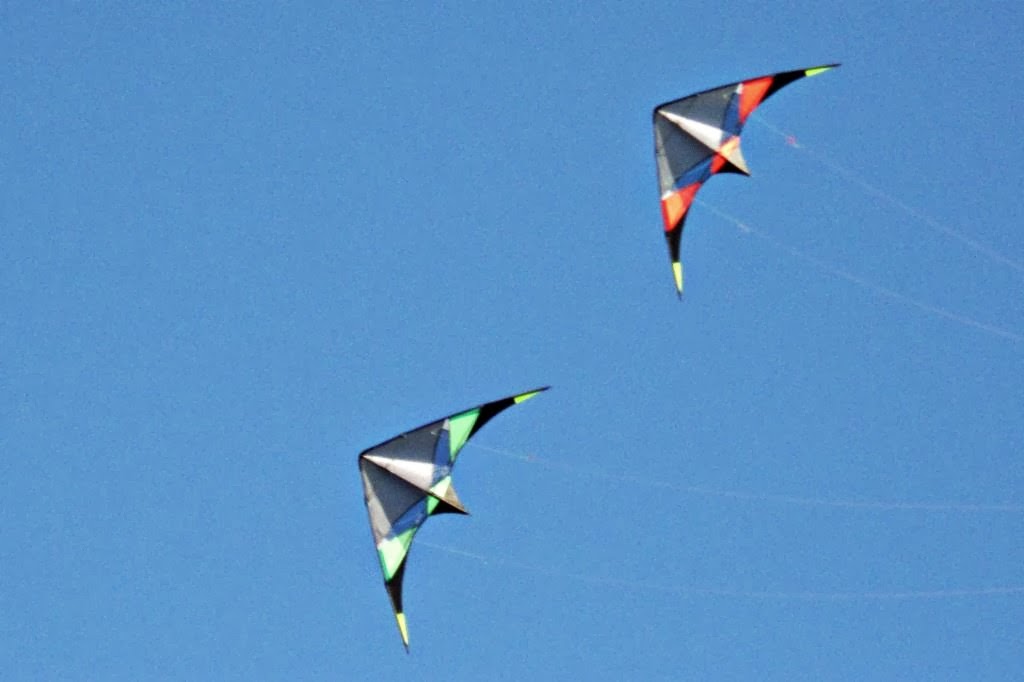 During our lunch break, the wind started to pick up more, with gusts well over 20mph, so we decided to switch over to the V2s 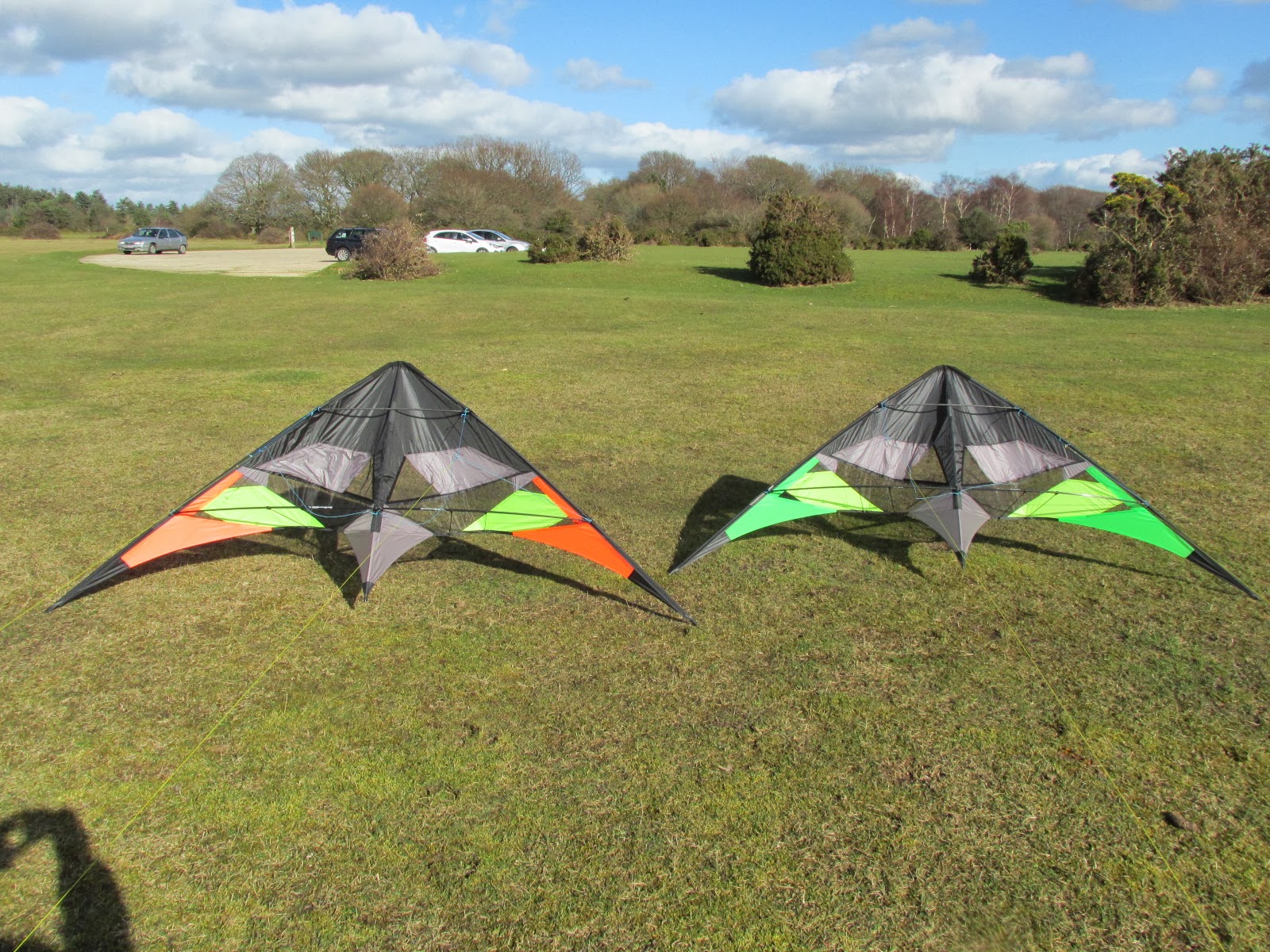 Although they do feel a bit 'heavier' on the lines (for the very simple reason that they are: 394 grams vs 332 grams for the V1), again they are very easy to control and respond very well to input. 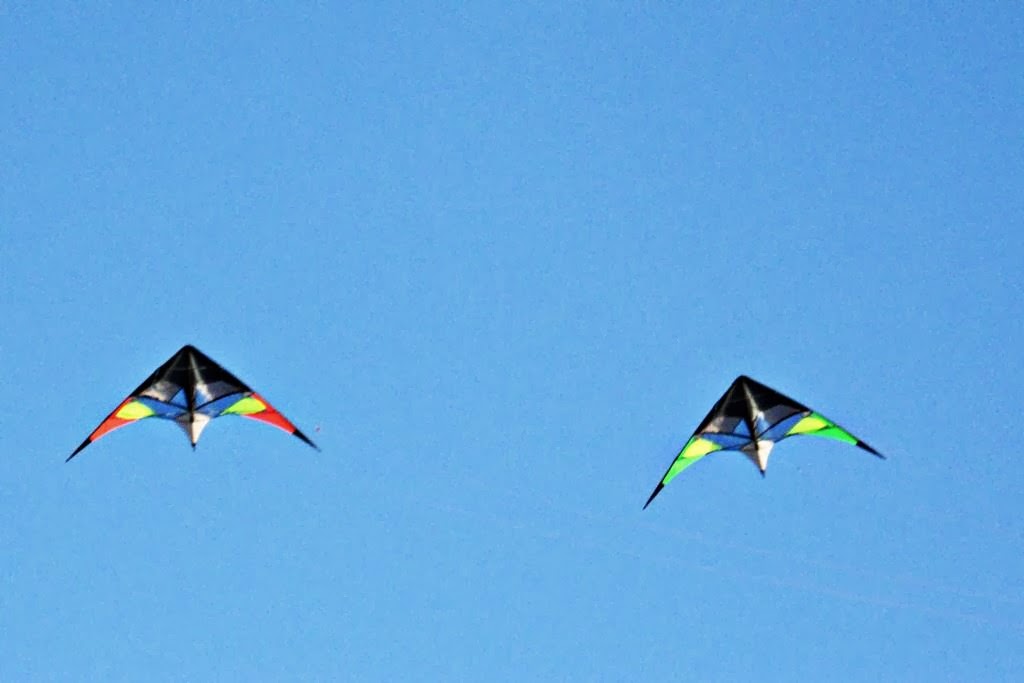 We first flew them with vent patches on, but the wind got increasingly gusty, so we took the patches off, to see what that would give us in flight characteristics. 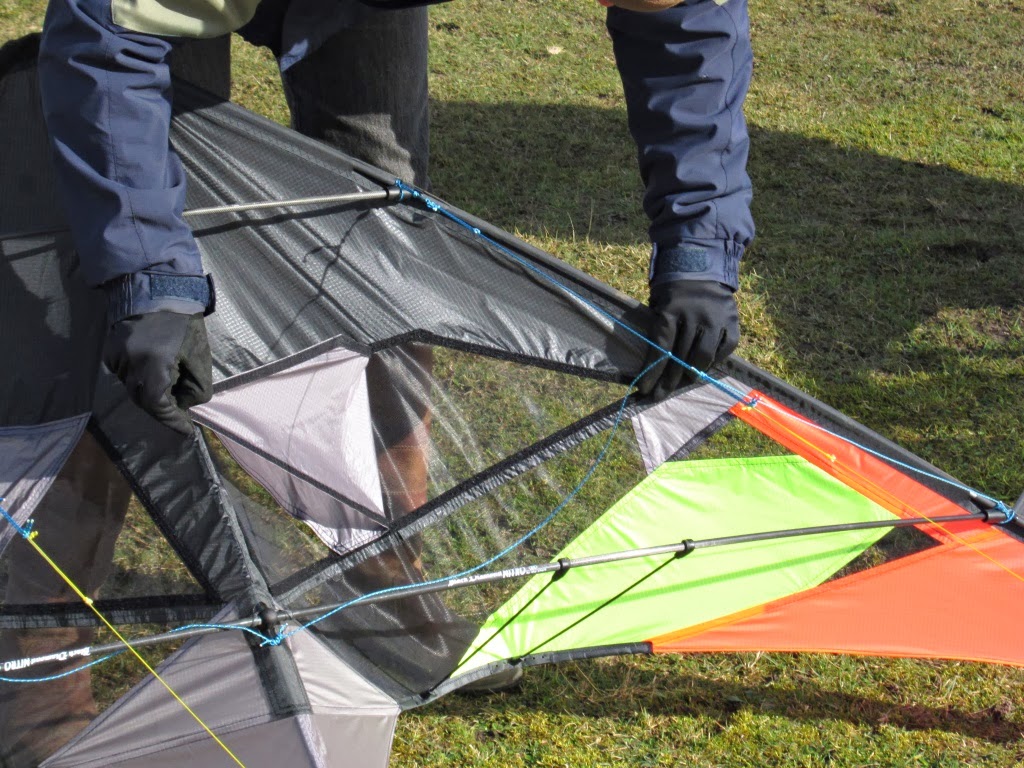 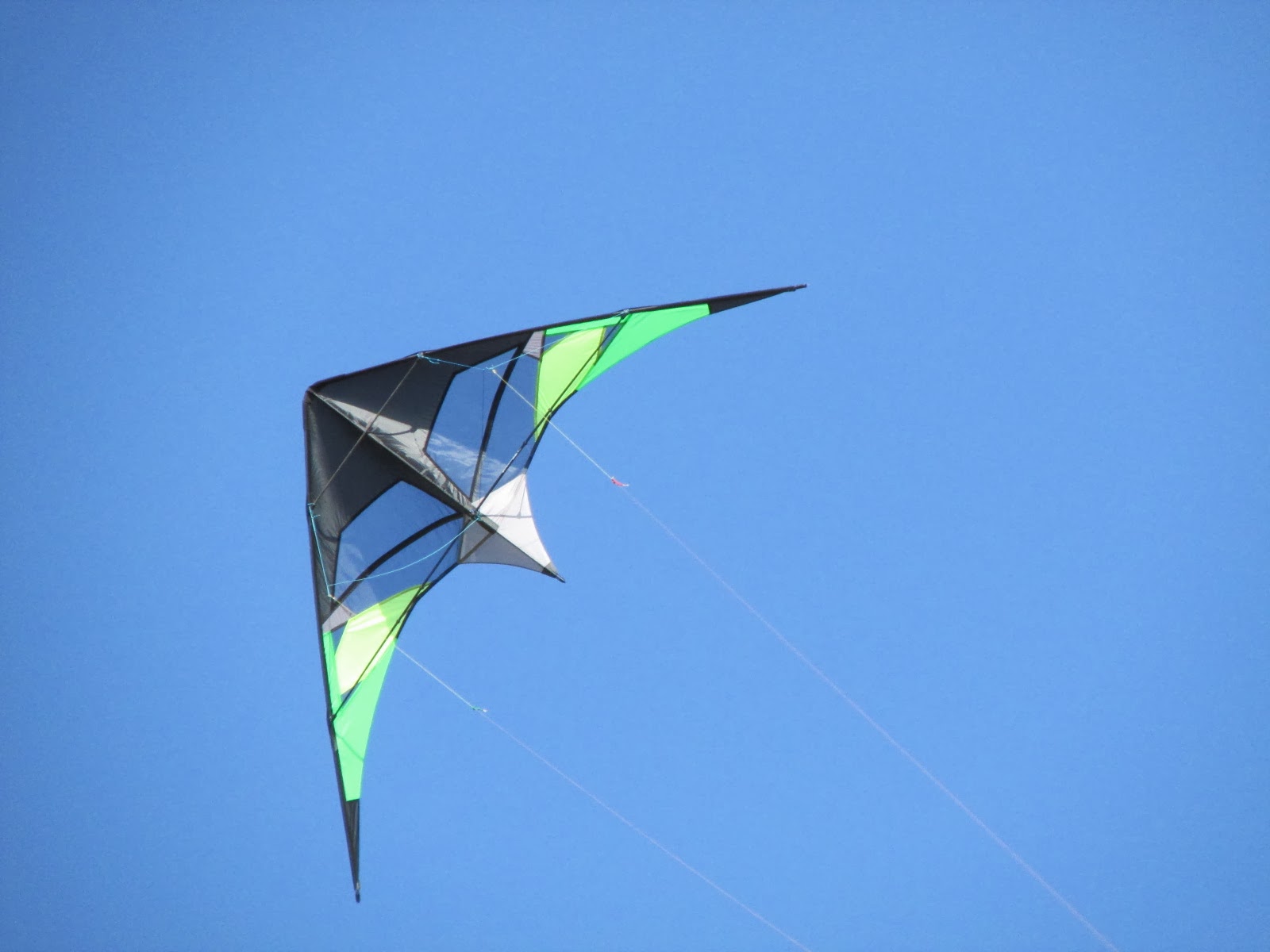 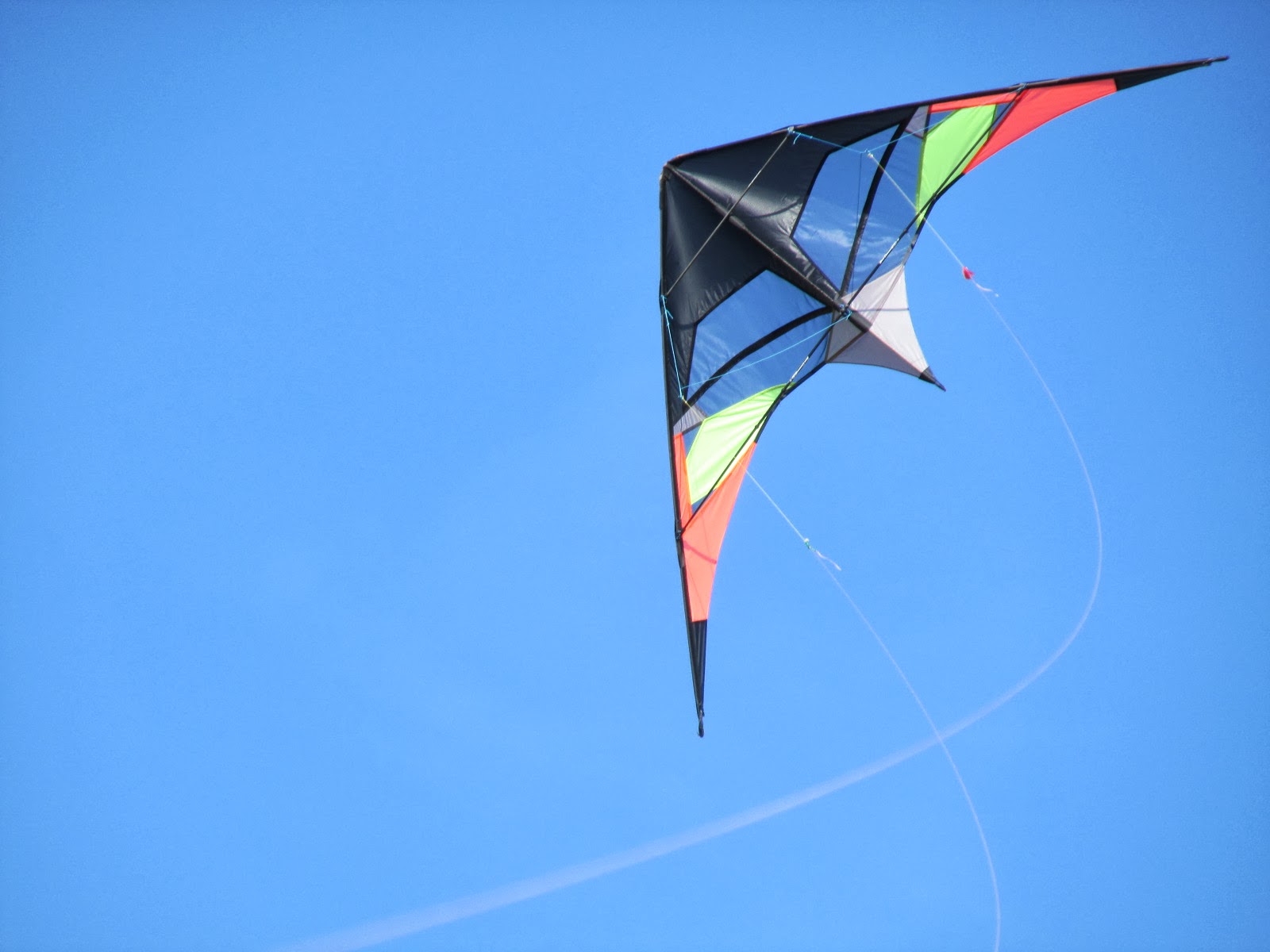 We flew our basic Ruthless Queen routine a few times with the V2s and that worked absolutely fine. 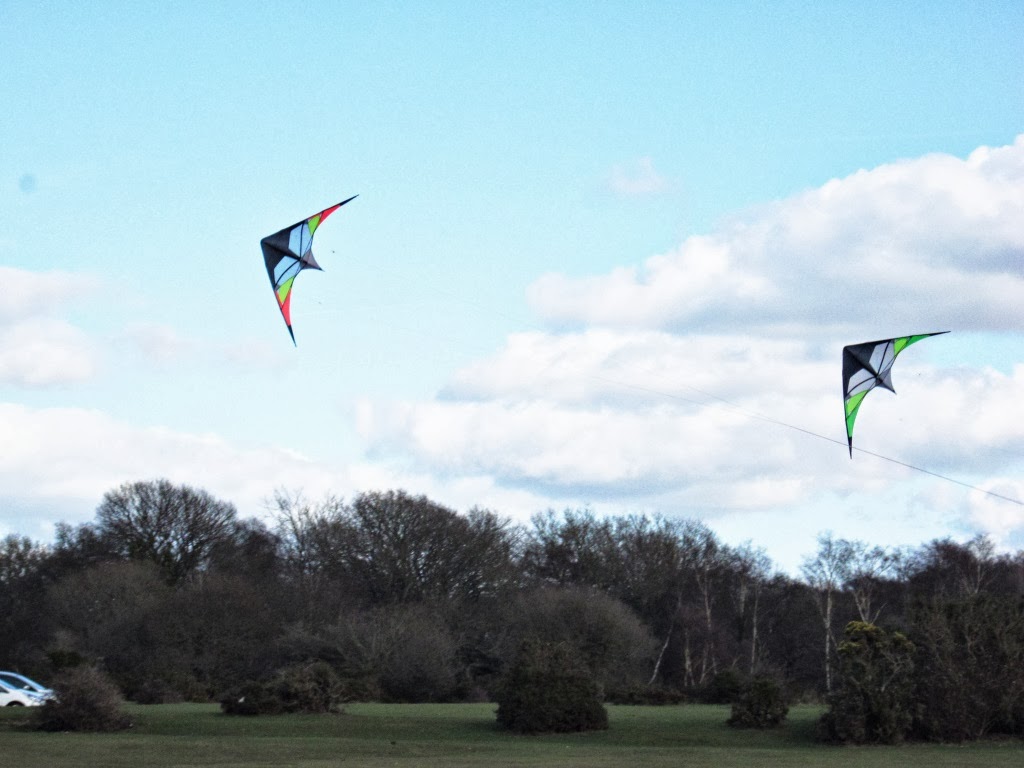 Of course, the whole point of getting different versions of the same kite was to have the same 'feel' on the lines, independent of the wind. I hadn't fully realised how nice that feels until actually experiencing it myself, especially with the SULs, Standards, and V1s. The V2s feel a little heavier, but still require the same level of input to do the same thing. My guess is that the Cuban Zeros, as the other extremes, will also feel a bit different from the middle trio. Can't wait to find out!

Credit for those pictures showing the two kites flying together, and the one of Irma ripping off the patches: Roger Backhouse
Posted by flyingfish at 11:22 No comments:

If you've seen our Facebook page last week, you'll know our full set of Airdynamics T5 kites has arrived! So today, with a mostly 5-12mph wind, the standards got their first airing. 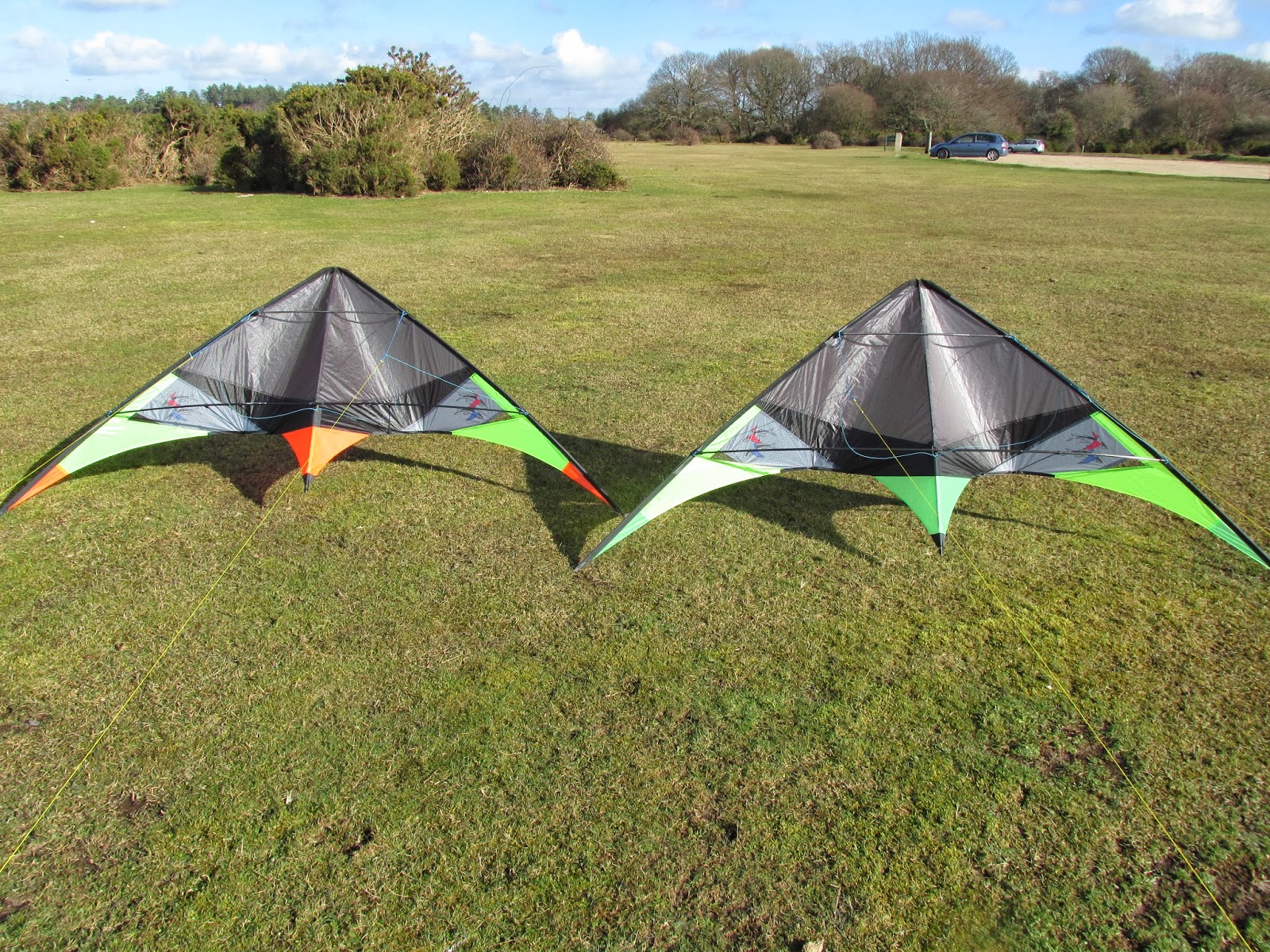 We spent many hours working out our ideal colour combination, and you always have to wait and see whether what seems to look good on paper or a computer screen looks equally good on the actual kites outside. In this case, it didn't: it looked even better on the real kites! 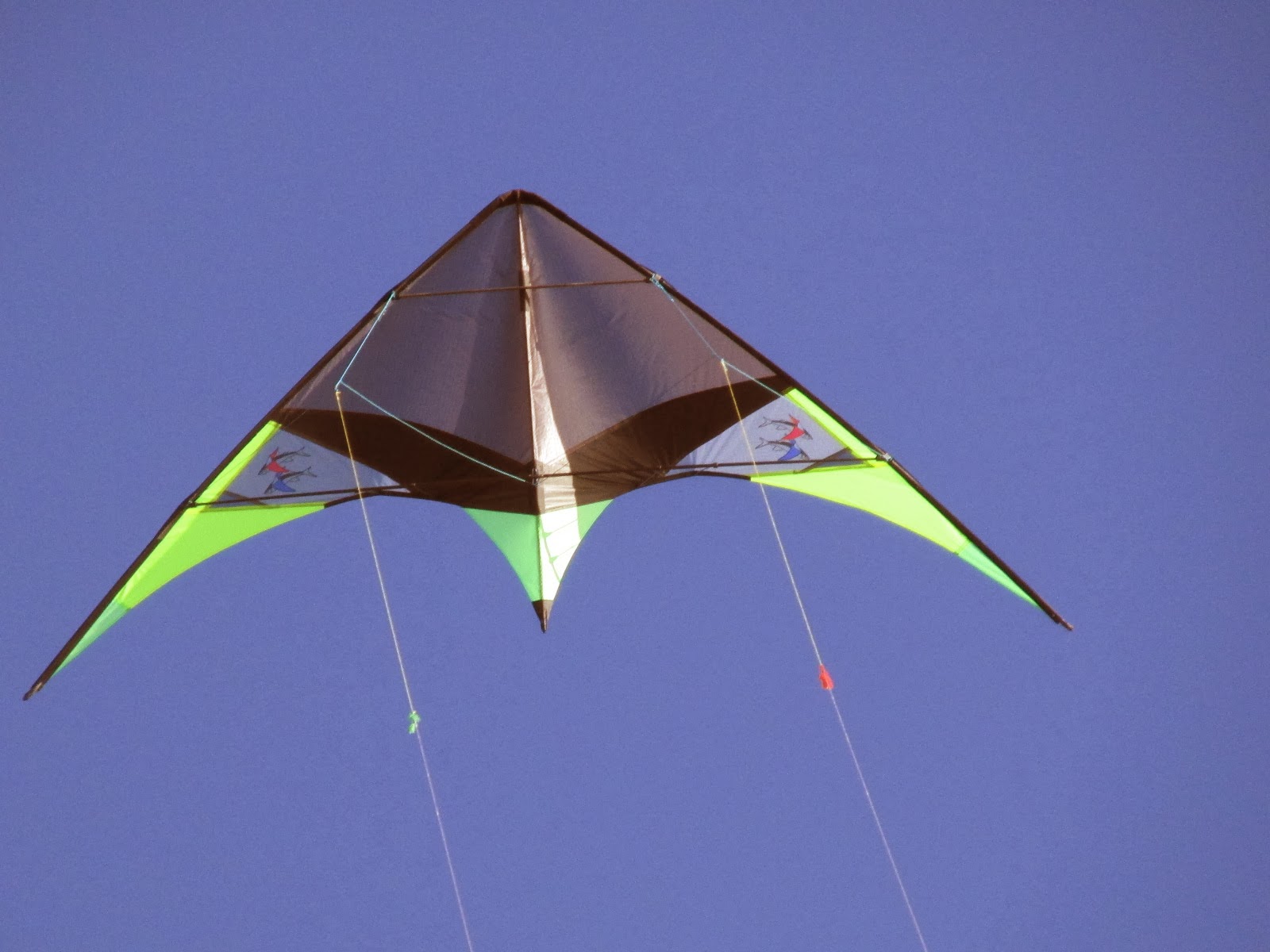 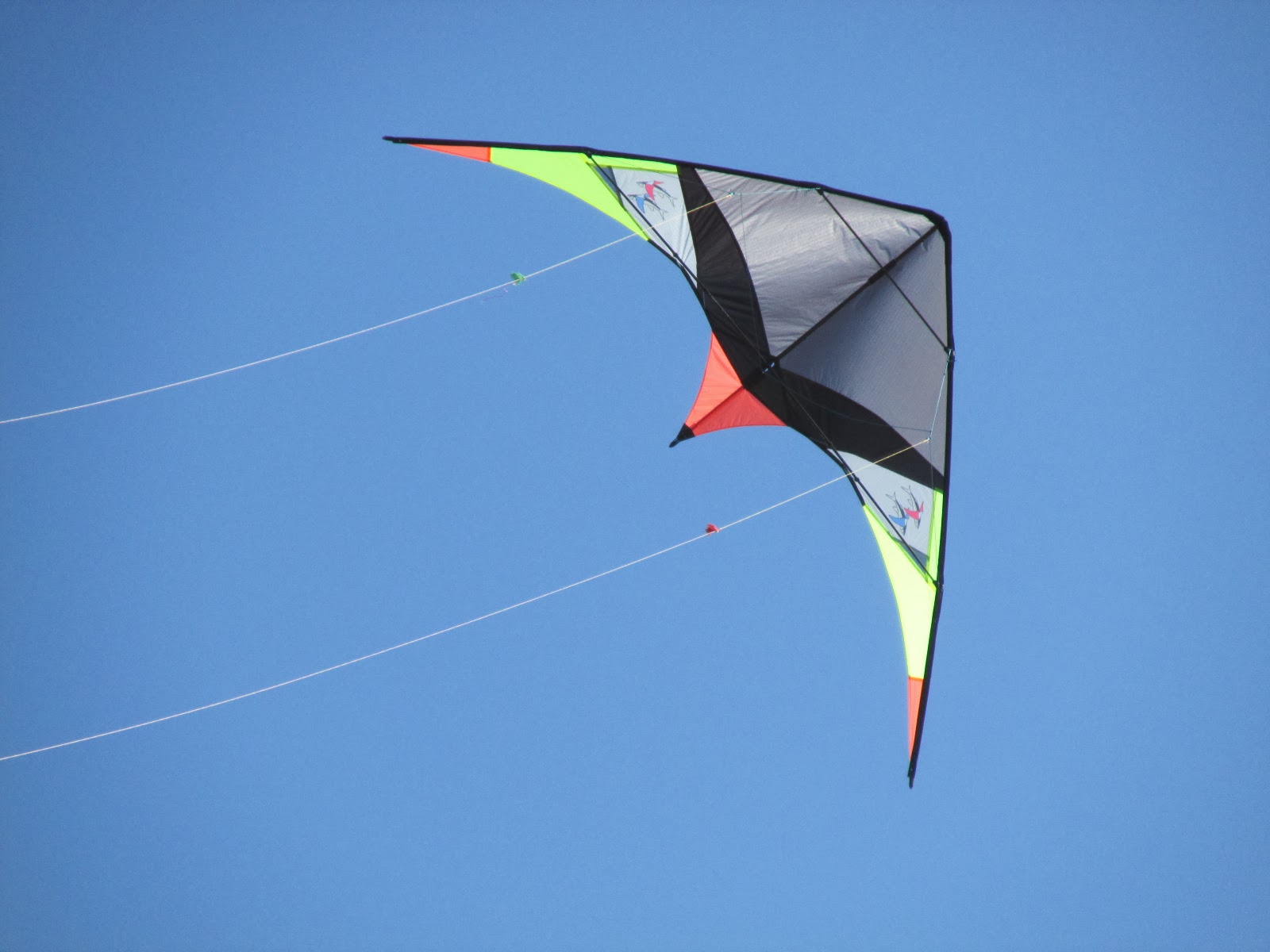 Must say that we're also very pleased with the panels showing the printed Flying Fish logo. As the standard kites are meant to be the ones we expect to use most often, we wanted these to be extra special. Printed panels were made by Roy and Hayley, by the way. 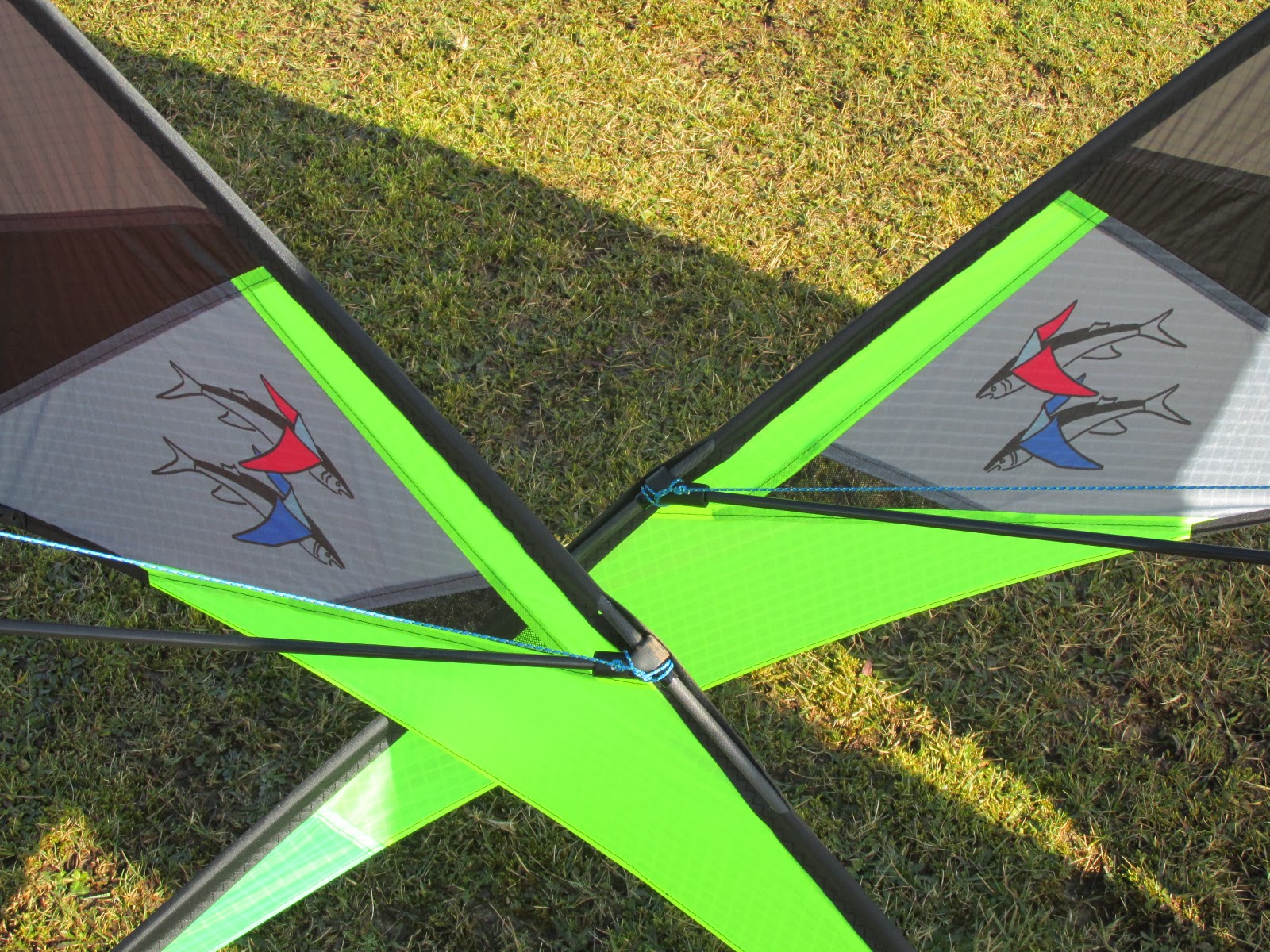 Most importantly, though: how do they fly? We put them through their paces, flying several of the patterns we normally fly, and we were very pleased to see that they fly just as we were used to for our T5 Taipan SUL kites. And that's of course the whole point of getting a full set of team kites from the same manufacturer: not having to get used to a different type of kite when you switch kites due to different winds. So, the bottom line is that they completely matched our very high expectations. 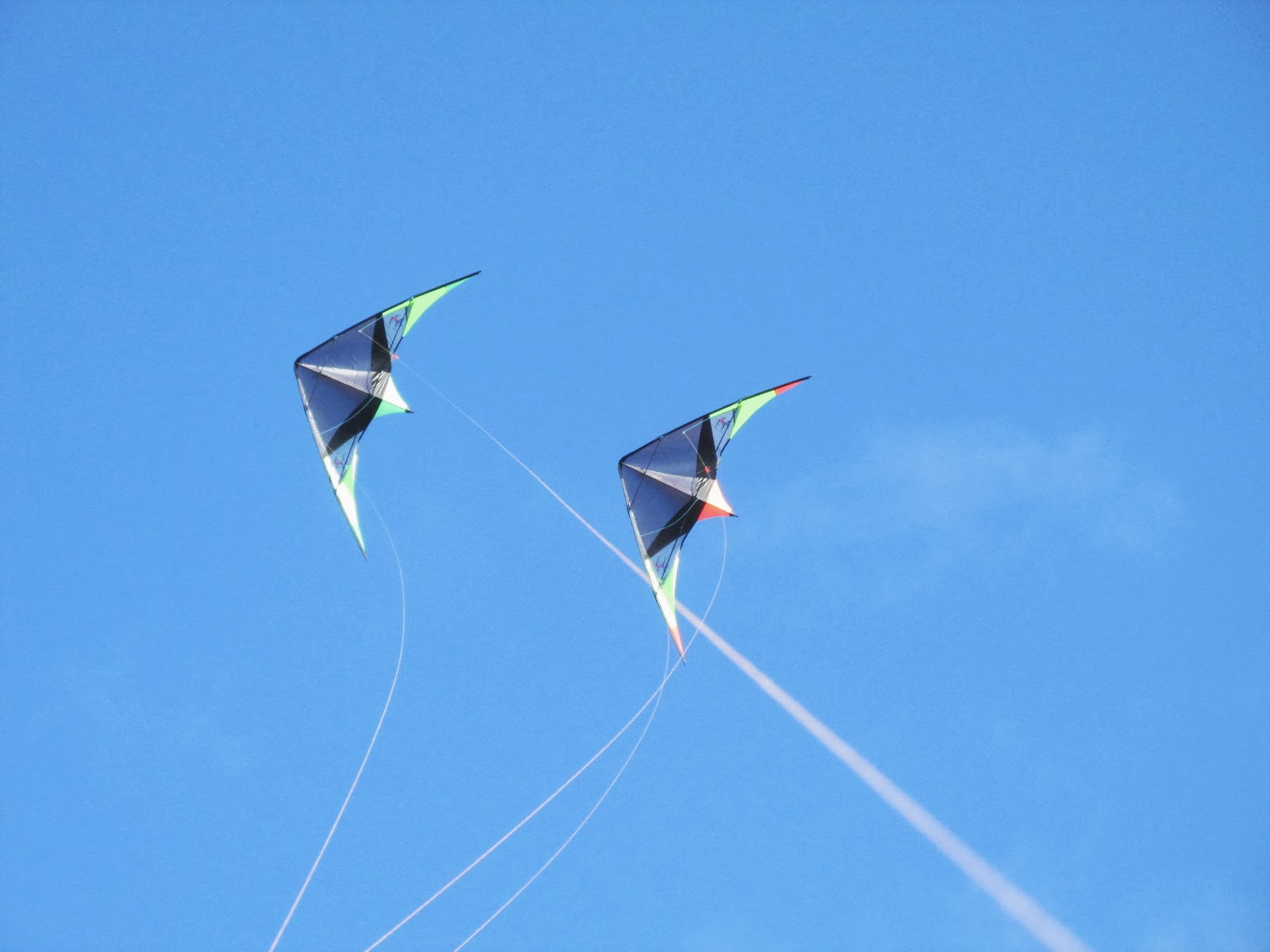 And of course, all T5s now have their own dedicated team bag! 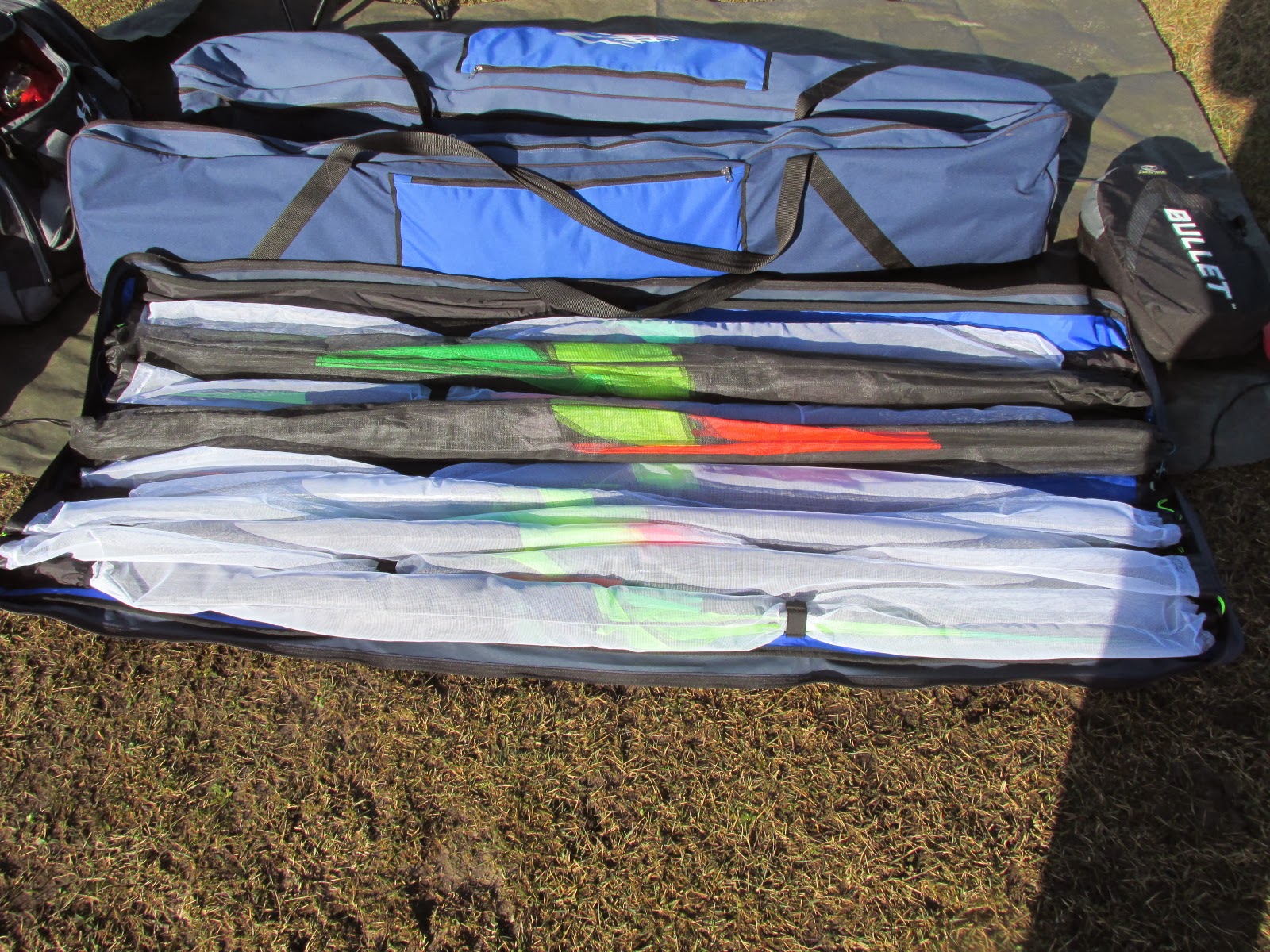 Watch this space for flight reports on the Cuban, V1 and V2!
Posted by flyingfish at 16:57 2 comments:

Arguably, the Winter Olympic sport that's closest to pair-flying is ice dancing. Two people (check) performing a routine to music (check) during which they move around the space (check) and show intricate manoeuvres (check). Even the length of the routine (4 minutes plus or minus 10 seconds) is in the same ball park (another check). Of course it isn't exactly the same as skating on ice clearly isn't flying a kite in the sky. But you get my idea (I hope).

With that in mind, watching some of the ice dancing in Sochi in recent days inspired me with an idea for a future routine. Now of course, we have several other routines to practice, and a few more ideas in the pipeline, so this is for the mid-term future, for sometime in the next few years.

So here's the idea: what about writing a kite routine which tries to take, for as fas as possible, moves performed during an ice dance routine, and translates these into kite patterns? Ice dancers skate around, sometimes following each other, sometimes close together, sometimes twisting and turning, sometimes in parallel, sometimes doing different things and then coming together again. All of that is possible with a pair of kites in the sky ...

Now the one ice dance routine that will forever be etched in my mind is the one performed by Jayne Torvill and Christopher Dean at the 1984 Sarajevo Olympics, exactly 30 years ago today. Of course, I'm talking about their famous 'Boléro' routine, where they broke and bent several of the then rules of ice dancing, and nevertheless won Olympic gold. Wouldn't it be great to write and fly a kite routine to the Boléro music, inspired by their ice dance? As you may know, the Boléro in its entirety would be way too long for a kite routine (Ravel's original version lasts more than 17 minutes), but I do have the arrangement that Torvill & Dean used in Sarajevo, which amounts to just over 4 minutes, the perfect length for a kite routine ...

And in case you want to refresh your memory, here are Torvill & Dean, 30 years ago, in Sarajevo. Enjoy.