As I hinted at in my first post, we are also part of a team, called L-katz. So here the story of how that came to be, and what we are doing with the team at the moment ...

Solent Kite Flyers has regular fly-meets, and shortly after we became members, we went to Stokes Bay for one of these fly-meets. At that point in time, we didn't know anybody in the club besides the secretary, but we had been told that several team-flyers had Stokes Bay as their default flying field. So a good chance to meet some new people!

As we arrived, there were three blokes flying big noisy kites in close formation. As we didn't want to disturb them, we set our kites up in a corner of the field, and alternated between flying ourselves and watching the formation flying. Soon one of the blokes, called Tony, walked over to us, and we introduced ourselves as new members and talked a bit.

We started going to Stokes Bay on a more regular basis, got to know Tony, Roger and Neil, and before long, they asked us to join them occasionally and fly with them. All we'd done at that point in terms of team-flying was just some basic patterns with the two of us, so flying in a team, with five kites flying in close formation, was really exhilarating!

Roger, Tony and Neil must have liked flying with us, because one day they invited us to join their 3-man team, called L-katz, and so create a 5-(wo)man team. Must say, we were quite chuffed!

So here we are, and L-katz will also fly at the Southampton Kite Festival on June 16/17. 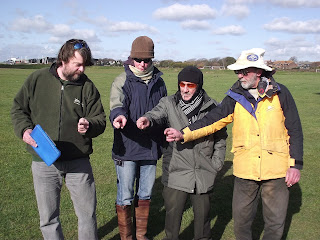 As you can probably imagine, choreography for a team is more complicated than for a pair. Although my kite-routine-writing experience was limited to one pair routine (for Flying Fish), everyone was happy for me to write the team routine, pick the music, and call the moves as team leader, flying in #1 position. Because Irma and I were used to flying together, it made most sense for her to fly next to me as #2, leaving #3 for Tony and #4 for Neil (for several reasons, Roger decided not to fly in the full team in the run-up to the Festival, but he and Tony will fly a separare pair routine). In case you're wondering what we're all pointing at in the picture above, that's us going through the moves, imagining our fingers to be the kites (you can also use little cut-out kites glued to sticks; may look silly, but it works!) 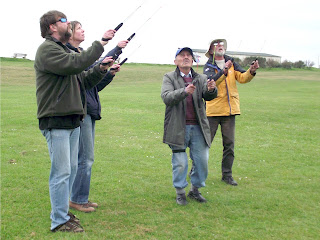 As with the Flying Fish routine, we tried to keep it simple and mostly combine the moves and patterns we'd already been flying into a routine. 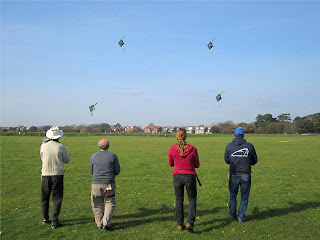 Unfortunately, we lost a lot of practice time due to bad weather or illness or work commitments of one flyer or another, so we are not as prepared for the Festival as we are with Flying Fish, but we'll simply do what we can! The music we're flying our team routine to is Gloria Estefan's "Can't Stay Away from You".


As before, the pictures in this post were taken by Roger, the 5th member of L-katz.
Posted by flyingfish at 07:40