You may have already seen it on Facebook, or, even better, you may have joined already. It's an idea I had in the back of my mind for quite a while, but I just never got around to make it reality: a Facebook group dedicated to pair- and team-flying. 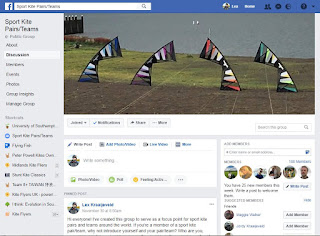 Focus of the group is on getting as many sport kite pairs and team around the world represented, whether they're competing at world level, or just having fun in their free time. I'm especially keen to have all levels of competence as part of the group. Plus, of course, anyone not part of a pair/team, but simply interested in the sport. And just to be clear, I consider dual-line and quad-line kites both to be 'sport kites'; not going to be a line-ist!

I must say that only a month after starting this group, I'm very happy with the response so far. At the time of writing, the group has 191 members, and 69 pairs/teams are represented. A further 19 have been invited, and for 11 I don't have any contact details (yet). So that brings the total list to 99 pairs and teams, and I'm under no illusion I've found them all. So there will easily be well over 100 sport kite pairs/teams in the world!

Where are these pairs and teams based? If we look at continents first, just over half are based in Europe. Another third are from America, half of that again from Asia, and a single team (so far) from Australia. No doubt there is a bit of a bias in favour of Europe and America, as I'm more likely to be aware of pairs and teams from these continents; Asia is surely underrepresented at the moment, and I'd be surprised if there really is only one team in Australia. 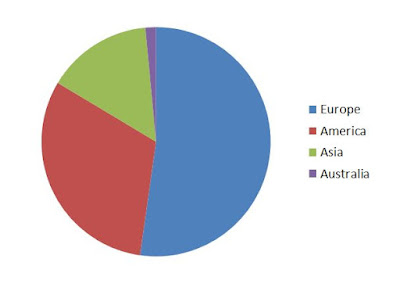 Breaking things down into countries shows 21 countries are represented in the group at the time of writing. Nine European countries (UK, Netherlands, Belgium, Germany, France, Spain, Italy, Lithuania and Russia). UK, France and Italy make up the bulk of Europe. Of these three, the UK is overrepresented (simply because I know all UK pairs/teams personally) and France is currently underrepresented (there are at least another ten or so French pairs/teams I know about who are not yet represented in the group). Pairs/teams from three American countries: USA (providing the majority of American pairs/teams), Canada and Colombia. Eight Asian countries (China, Taiwan, Thailand. Malaysia, Singapore, Indonesia, Philippines, Japan), each represented by one or two pairs/teams. As I mentioned above, Asia as a whole is definitely underrepresented; I know of several more pairs/teams in China and Japan, for instance. And then one team from Australia. 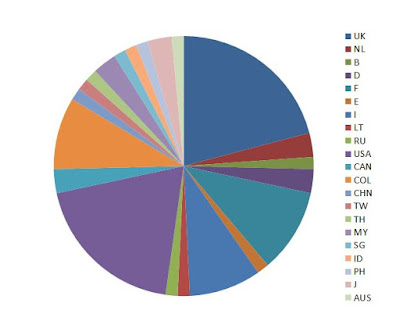 So which parts of the world are conspicuous in their absence? No representation from Africa, and I'm not aware of any African pairs/teams. Best chance of there being one is maybe South Africa? Lacking from Europe is Scandinavia as a whole, nothing from central Europe, and very few from eastern Europe. Only three countries from America; no representation from central America and the Caribbean, and only one south American country. I do know of an Argentinian team which I've invited, but nothing from Brazil or Chile? Spread of countries from the Far East (and, as I said, I'm sure I've missed many from that part of the world), but nothing from India? Nothing from the Middle East; anything happening in Israel? And, as I said, I'd be surprised if there is only one team in Australia.

If you're reading this and you would like to be part of the group; simply go here, and request to join. And if you know of any pairs/teams in parts of the world not represented in the group yet, feel free to drop me a note.

Posted by flyingfish at 11:12 No comments:

If you know me as a kite-flyer, you may well know I have a weak spot for 'unusual' kites. Years ago, when I stumbled across a Cerfs-Volants Azur Tandem for sale, I couldn't resist. It turned out this kite is a very good team kite, so when I had the opportunity to get my hands on a second one, I pounced. Since then, we really enjoy flying our pair of 'Azurs' together! 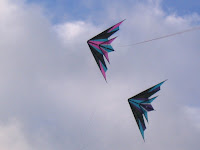 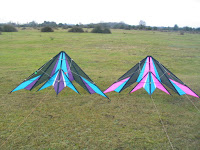 Cerfs-Volants Azur was a Canadian company, producing kites in the 1990s. Their top-of-the-range 'Tandem' team kite (it sold for well over $300 in those days, so far from cheap!) had an unusual design with an extra pair of winglets near the bottom end of the spine. As I mentioned above, they are excellent 'old school' team kites, tracking extremely well, and with little variation in flying speed across a wide range of wind speeds.

The company produced more models, most of which were pretty normal-looking dual-liners. Except one ....

In an attempt to break into the emerging trick kite market, Cerfs-Volants Azur produced the El Pronto. Where the Tandem has a pair of extra winglets near the bottom of the spine, the El Pronto has a flat 'stabiliser' at the tail. Currently it's a very rare kite; I've seen just a few pictures on the web, and only ever come across one for sale. That one, you guessed it, is now in my possession (thanks for giving me first dibs, Charly!). 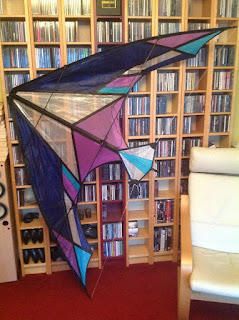 The El Pronto really is a gorgeous-looking kite! Against the sky, because of the use of ripstop as well as mylar in the sail, the kite appears to made of stained glass. 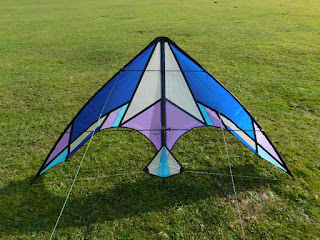 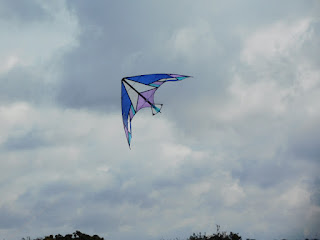 In terms of flight characteristics, it doesn't feel as solid on the lines as the Tamdem. Slightly nimbler, but it has the same level of tracking as its older brother. In terms of tricks, it does axels and half-axels easier than the Tandem, but that's not very difficult to achieve: the Tandem can be coaxed into flying (half-)axels, but only very reluctantly (and that extra pair of winglets is always ready to snag your line if you don't give plenty of slack). Keep in mind that I'm not a trick flyer, and my tricking skills are pretty basic. 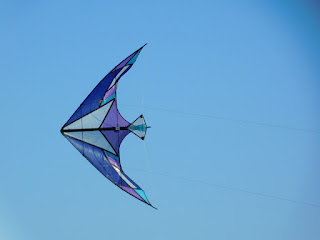 Given the looks and flying characteristics of the kite, I'd be very happy to add a second El Pronto to our pair quiver should I stumble across another one; colour not important!
Posted by flyingfish at 18:39 3 comments: