These past two years, when we attended kite festivals, we usually brought our wee 2-person tent with us in which to keep our kite bags. It served that purpose fine, but no more than that. The tent is too small to sit in, change clothes in, take shelter in when it rains, or basically, do anything else than simply serve as a place to store our kite bags.

So it was time to look for something a bit more fit-for-purpose. Several of the kite teams (for instance, Team Flame and The Flying Squad) come to kite festivals with Quechua tents, which have plenty of space for kite and other bags, but also offer space to sit in, move around in, and allow you to take stuff from a bag without having to drag the bag from the tent first. Also, they pop up and fold up again in very little time.

Bit of googling, and the decision fell on a Quechua Base Seconds. They come stored as a 'wheel': 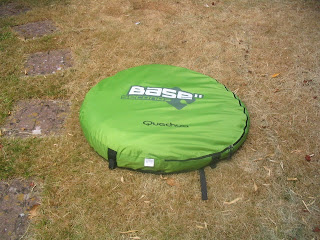 And then literally explode into a very nice base tent! 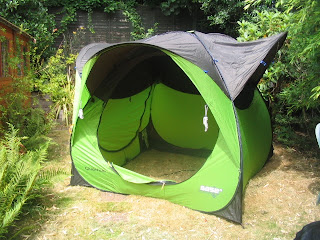 It really takes a few minutes to set the tent up, but collapsing it for the first time took a bit longer ... I thought I'd watch carefully how the tent unfolded, so I'd know how to fold it back up again, but the unfolding went so fast that we had to resort to watching a video on the Quechua web-site to see how to fold it up properly again. It'll take a few more attempts to do it within the stated 2 minutes, but I'm sure we'll get the hang of it in due course.

First time our Quechua will see action is probably Portsmouth Kite Festival; it'll be right next to our pole with flying fish!
Posted by flyingfish at 18:00 1 comment:

The results from the 2013 UK sport kite championships are in. National dual-line team champion is Team Flame, whereas the dual-line pair title went to Phoenix. Runners up were Airheads & Friends, and Ex-Grads, respectively. So both Team Flame and Phoenix retain their 2012 titles. 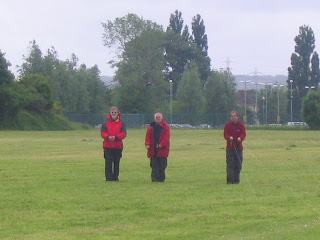 Winner of the dual-line individual title is John Williams, with Michael Hancock in 2nd place. Full results on the STACK web-site.
Posted by flyingfish at 08:03 No comments:

We'd not been to Malmesbury Kite Festival before, so this was the first time we flew at a festival without having attended it a few years prior as member of the public. Weather was pretty hot, with 5-12mph winds on Saturday, whereas on Sunday, the day started with winds of 2-10mph, which gradually died down to about 1-6mph.

What was especially nice for us about coming to fly at Malmesbury was meeting a whole bunch of kite flyers we'd not met before. As you might expect, I'll focus on pair/team flying in this blog post, but there will be a link to more general photos at the end.

First up in terms of 'kite flyers we'd not met before' are David and Angela Green. Husband-and-wife pair, like Irma and myself, who flew their pair routine both on Saturday and on Sunday. 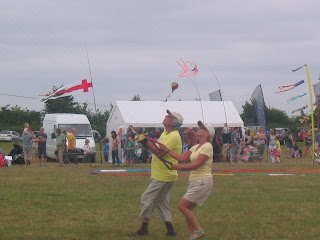 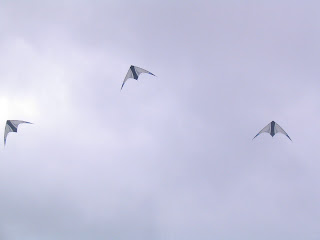 Now before you remind me that a pair means two, and there are clearly three kites in the sky in the picture, let me explain that 'the Greenies' fly their pair routine with David flying two kites and Angela the third one. As far as I'm aware, they're unique in the UK in that respect. Nice moves involving wraps and multi-directional threads.

Sky Symphony only flew on Sunday and their extended sequence of demos culminated in a 3-man routine. 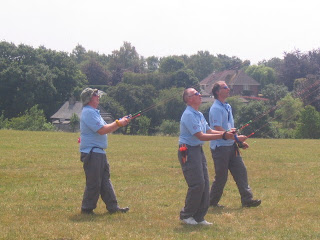 Big slow flowing moves appear to be their trademark. In many ways (including their calling style), their flying reminded me of the Top of the Line team in the 1980s. 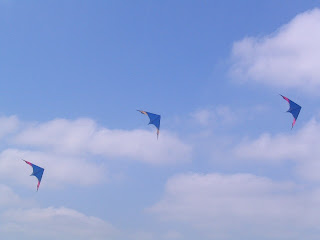 So what about our own flying? We flew our pair routine twice on the Saturday, using our Azur kites. On Sunday, we warmed up with our Northshores, then flew our first routine of the day with our Cheetahs, and the second routine with our SUL T5 Taipans; just goes to show how the wind dropped during the day ... In general, we were pretty pleased with our routines; not perfect, but no major mistakes either. As far as I'm aware, no one took pictures of us flying our pair routine, so you'll have to make do with our Azur kites ready for launch on Saturday morning, against Malmesbury Abbey in the background. 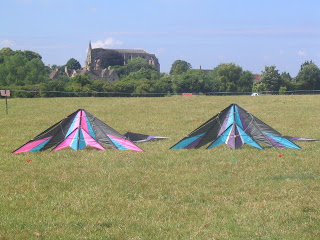 Prior to the festival, Jon had asked me if we could maybe do something with quad kites on Saturday, given that Sky Symphony include a quad kite in their sequence of demos. Now that was the perfect opportunity to fly my VampDevil routine!

Unfortunately, the wind was just a bit too light when I flew to give consistent pressure on the sail, so I had to spend most of the routine fighting to keep the kite in the sky (and running out of arena in the process), rather than fly to the music. So definitely room for improvement there.


Besides the three dual-line pairs and team, other invited (single-line) kite flyers included Stafford Wallace, Karen and Godfrey Gamble, Jerry and Carolyn Swift, and John Dobson. More photos of their, and other kites can be found here.

I want to finish this blog post with a big public thank you to Jon and the people of Malmesbury for wining and dining us and for the very warm welcome in general; we definitely hope to be back next year!
Posted by flyingfish at 20:11 No comments: 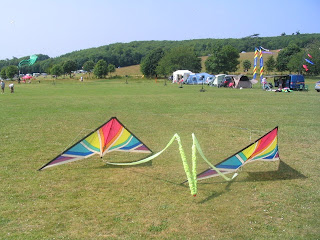 Must admit that they were brave trying to fly with tails in the light winds, and they (almost) always pulled it off! 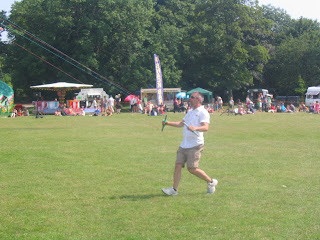 Very glad Carl flew his 'Chi Mai' routine several times, as that really is my personal favourite. Carl's final routine involved two kites with the tails linked together; that's definitely something we want to try flying as a pair in due course! 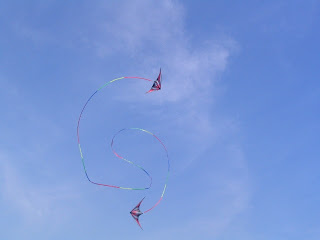 We flew our own routine six times over the weekend; five times with our Taipan SULs, and once with our Cosmic ULs. 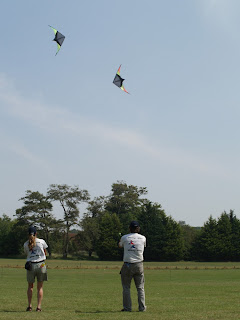 Of course, when flying the Cosmics, the wind died halfway through ... 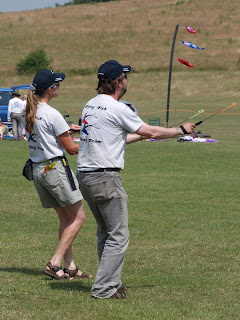 Still, we're pretty happy with our general flying; few small mistakes in the first two runs, but nothing the public would have noticed. And we coped well with the light wind, which had a tendency, especially on Sunday, to drop away. 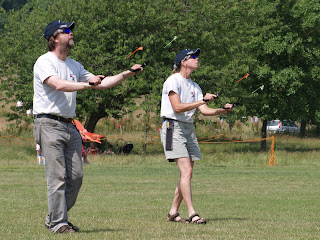 Besides flying our own routines, we crewed for Team Spectrum (and they for us), and helped Karl & Sara Longbottom fly their kites. More general photos can be found here.

Oh, in case you're wondering why I didn't say anything about L-katz, given that we have been practicing a 3-(wo)man version of our team routine especially for Brighton ... Well, the cooling system of Neil's car couldn't cope with the combination of warm sunny weather and the major traffic jams around Chichester (due to the Goodwood Festival of Speed), so he never made it to Brighton ...

Pictures of us: credit Carl Wright.
Posted by flyingfish at 18:08 No comments:

The sunglasses I use for flying reached the end of their lives last week. The frame had already been broken and glued back together again several times, but it started to come apart again. So time to look for a replacement!

As I was about to order a pair of these vented RayZor sunglasses, I noticed they came in a whole range of different frame and lens colours .... and that got me thinking a bit: why not get two pairs for each of us, making sure Irma and I have matching sunglasses, which also match our outfits when flying as Flying Fish and as L-katz?? 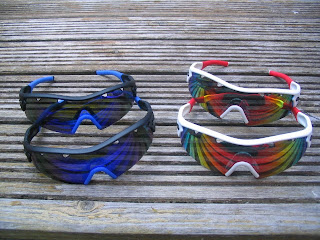 Silly? Yep, guilty as charged!
Posted by flyingfish at 16:46 No comments: 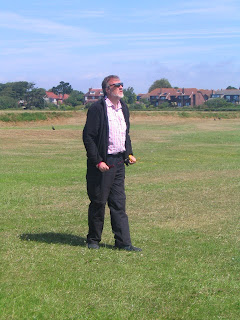 At the Southampton Kite Festival, Barry Savell (national director of STACK, and a member of Team Flame) asked us if we were interested in a day of team coaching. Barry, is a North Shore Radical noisy???

Team coaching took place last Sunday, at Stokes Bay. Weather was nice and sunny, with a pretty smooth 8-12mph wind for most of the day, so excellent circumstances!

The coaching consisted more or less of three different parts. First of all, Barry gave us general pointers to team-flying, focusing on spacing (on the ground as well as in the air), keeping shapes and patterns, and speed control.

All of these pointers of course followed by trying them out, and the speed control exercises got pretty extreme! Four-(wo)man Arc de Triomphe, anyone? 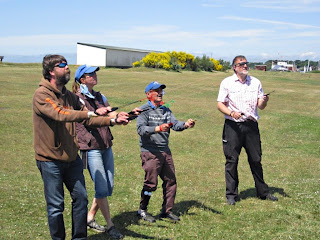 Then, Barry provided us with lots of new patterns and ideas, for us to play with and practice in the weeks and months to come: full team wraps, paired wraps, walking sticks, jitterbug, and lots of combinations involving circles and boxes. 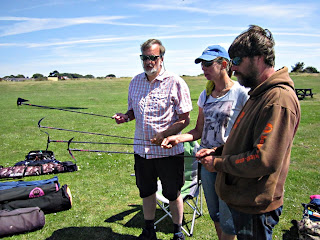 And finally, we flew the L-katz team routine, and got feedback on how and where we can improve it and make it more exciting. 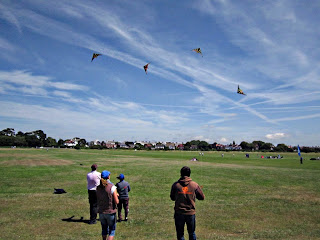 In all, a very useful day, which has given us plenty of material. Some of which will be used to improve our current team routine, and some will no doubt find its way into the next team routine.

Barry, a big public thank you for making the effort to come down for a day and help us improve our flying!

Credit for the last three pictures: Roger Backhouse
Posted by flyingfish at 19:56 No comments: