As Flying Fish, we've flown in many mega-teams over the years, but one thing we'd never done is fly as part of a mixed dual/quad-line team. Something we've always wanted to try, so when the opportunity presented itself, we pounced! 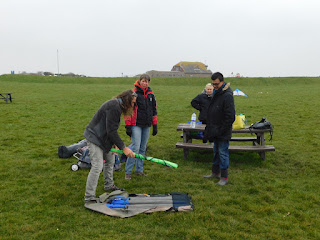 Getting together for this at our regular team flying field at Stokes Bay were Flying Fish, Twisted Bridle, and two member from Amalgamation: four dual-line kites and two quad-liners. 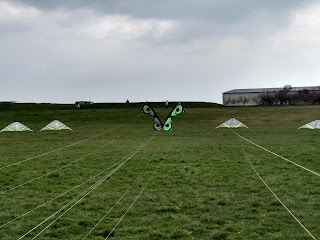 At first, it was a case of just flying together, getting a feel for how the two types of kites behave in a mixed line-up. The dualies flew on 40m lines and the quads on 120' lines; not identical, but near enough to make things work. As the speed of dual-line kites is less controllable than that of quad-line kites, it was mostly the quad-flyers that had to match their speed to the dual-flyers than the other way around.

Once we had gotten used to flying together in formation, it was play time! We tried out lots of things, bouncing ideas of each other, and generally having fun. Some of the ideas didn't quite work, but most of them did. Obviously, we tried to make use of the specific characteristics of duals vs quads, as why else would you fly the two types together in a mixed team.

Here's an example of that, a move we called 'Monster Threads' and which we practiced quite a bit. Idea is that the duals fly threads between the quads, which are flying up and down to leave space for the duals to fly through and then close up again. The bottom quad is flying reversed so it looks a bit like a mouth with teeth opening and closing (hence the reference to a 'monster').

Flying together for something like five hours, we had a lot of fun and tried out a wide range of patterns. Enough already to get together at a kite festival and just fly an impromptu routine. Hopefully we can get together every once in a while and polish our moves a bit more; but given that flying in a mixed dual/quad team was new for everyone involved, I think we did pretty well in the first training session of Team A.T.F.!

And why the team name A.T.F.? No, it's got nothing to do with the US agency for Alcohol, Tobacco and Firearms .... But knowing that the team brings together members of Amalgamation, Twisted Bridle and Flying Fish, you can probably work it out!

Team A.T.F., coming to a festival near you, maybe?

Video credit: Jeremy Wharton
Posted by flyingfish at 13:45 No comments: 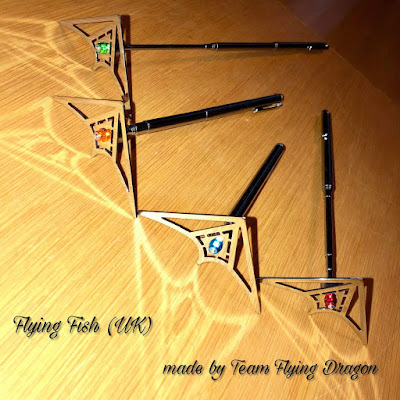 More when we actually have them!
Posted by flyingfish at 19:49 No comments: