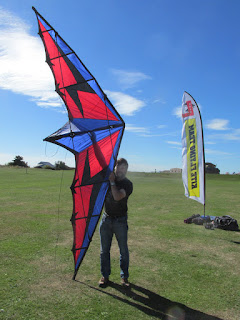 I'll say it before someone else does: this is probably a bonkers idea .... So, with that now out of the way, here it is:

Last year, I was given an Elliot Mystic. Yes, given, for nothing, nada, noppes. It needed a bit of TLC and one spar needed replacing, but if I wanted it, it was mine. Bit of a no-brainer, right? Getting a spar replacement turned out to be not as easy as I thought, as it has 12mm spars. But once the kite was R2F, I took it out for a spin.

So how did I manage this 4.20m wingspan beast? Well, I was slightly apprehensive, but it proved easier than I thought. I flew it in a 8-12mph wind, which was perfect. Kite takes some effort to launch: big sweep with the arms, and run backwards a few steps. Once flying, it didn't pull as much as I feared it would, but it's still a handful; no doubt this monster will develop serious power when the wind goes above 15mph and goes towards 20mph. 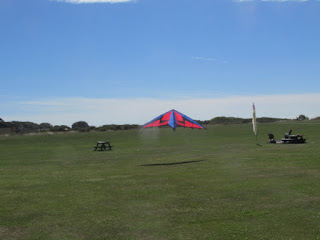 You need to keep the kite flying; it doesn't like stalling at the edge of the window. Also, it has a huge turning circle, so I had to make sure all turns down were initiated high up. Flight is slow and serene. In all, it was quite an experience flying this beast! 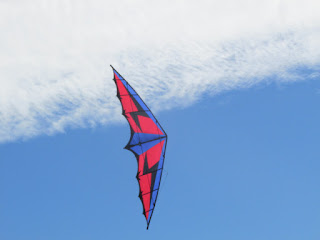 So what's the bonkers idea? Well, what if we had another Mystic .... Would we be able to fly a bit of a pairs routine with them? Felix Mottram, of The Decorators fame, told me he once flew an impromptu pairs routine with two Force 10 kites, and these have a 4.50m wing span. So flying these massive kites in a pairs routine can be done ... Whether we will be able to do it is another matter, and there's one way to find out ... Anyone have an Elliot Mystic gathering dust, looking for a new home and up for a challenge with a sibling?
Posted by flyingfish at 21:27 4 comments: