Pair- and team-flying is a pretty small sport in the UK, so it's great to see new blood entering the sport. And in this particular case, it's blood with a twist ...

Four Bi' Two is a newly-formed pair, consisting of Graham Lockwood and Josh Mitcheson. The twist is that both fly two kites at the same time! Here's a video of a recent training session:


I've not seen them perform live, but hope to do so before long. And as each of the two members can also fly three kites at the same time, will we see Six Bi' Two at some point??
Posted by flyingfish at 08:17 No comments:

Basingstoke Kite Festival started rather 'interesting': thunder, lightning, and heavy rain. Fortunately, the bad weather started to clear towards the end of Saturday morning, and the rest of the weekend gave us glorious sunshine. Winds were typical for Basingstoke: up and down, full of holes, changing direction a lot. 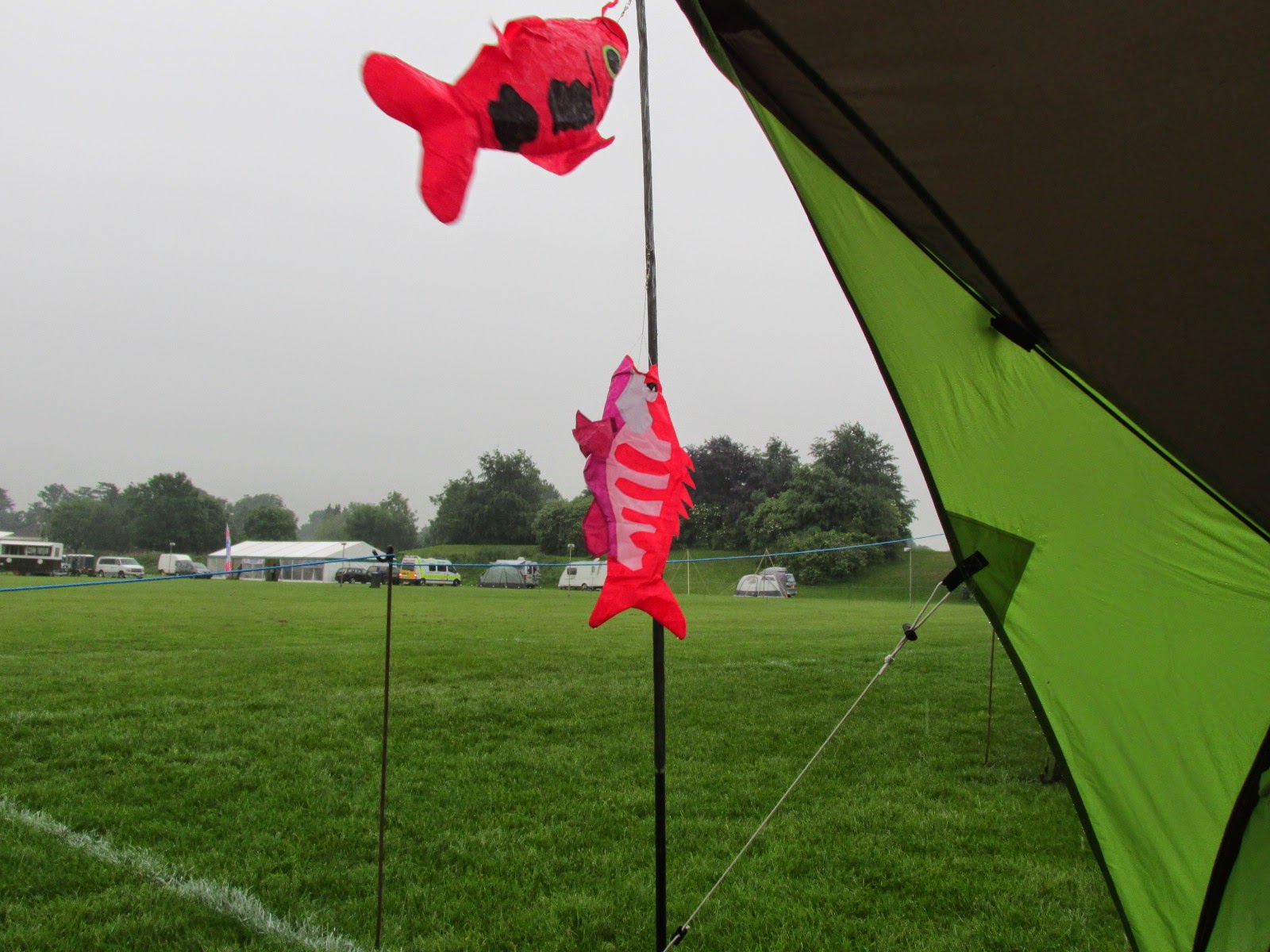 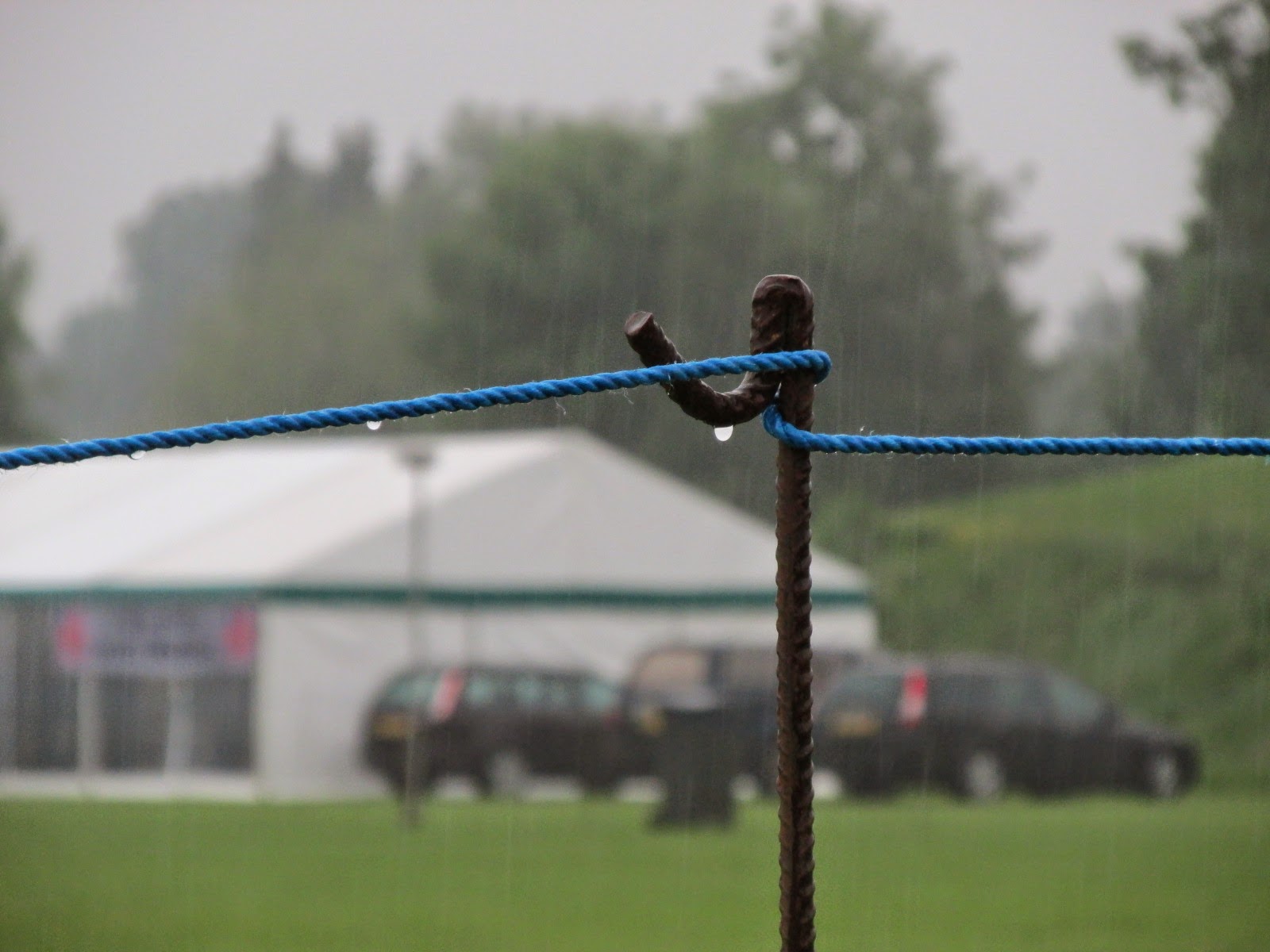 On both days, we flew our routine twice. On Saturday, using only our Cubans, while we could move up to our T5 SULs on Sunday morning, going back to Cubans again for the afternoon. Our flying on Sunday was clearly better than on Saturday. Like the other pairs, we did what we could given the finicky wind. 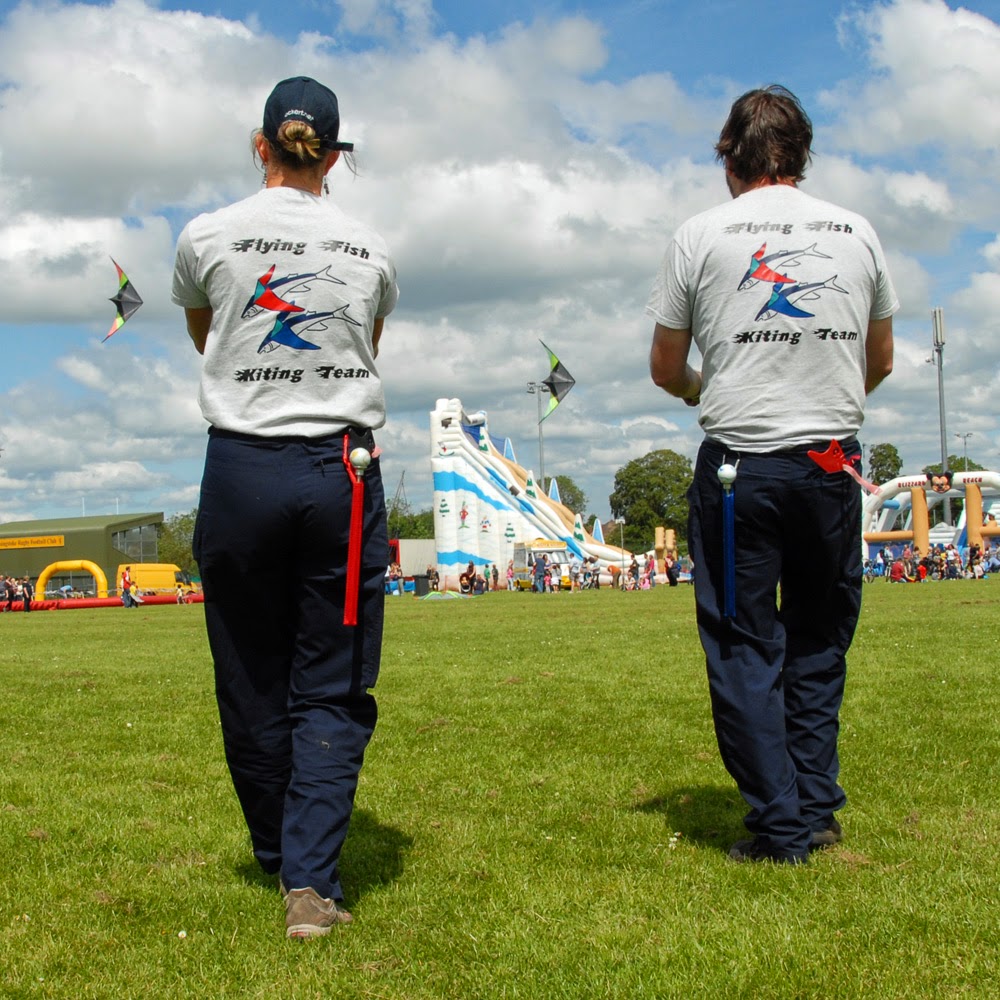 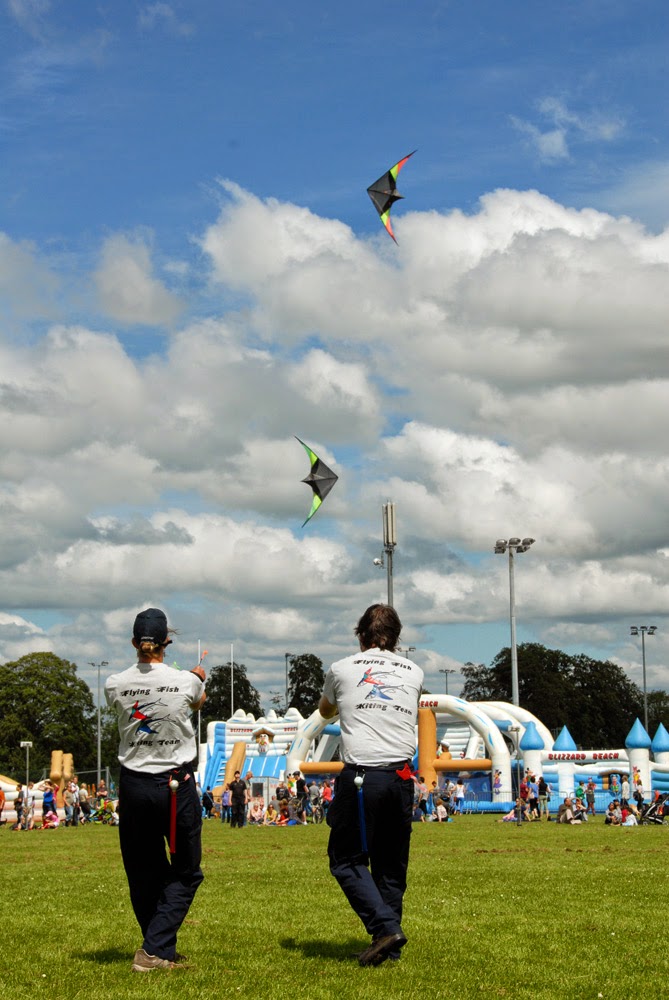 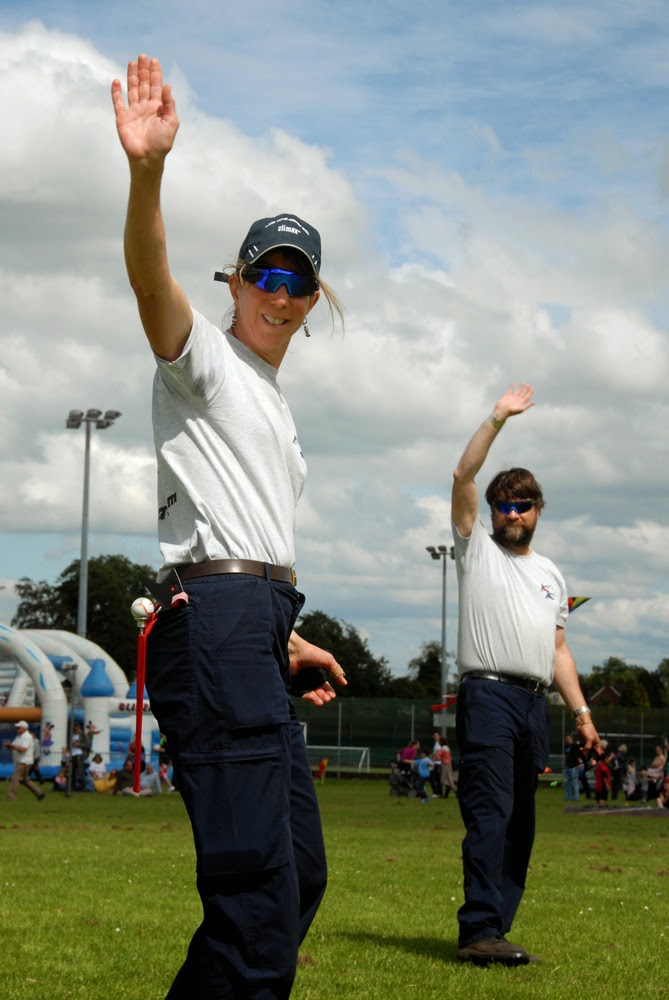 And which were those other pairs? First of all, Team Spectrum, flying on both days. They also struggled with the wind, and had to switch kites or tails more than once. 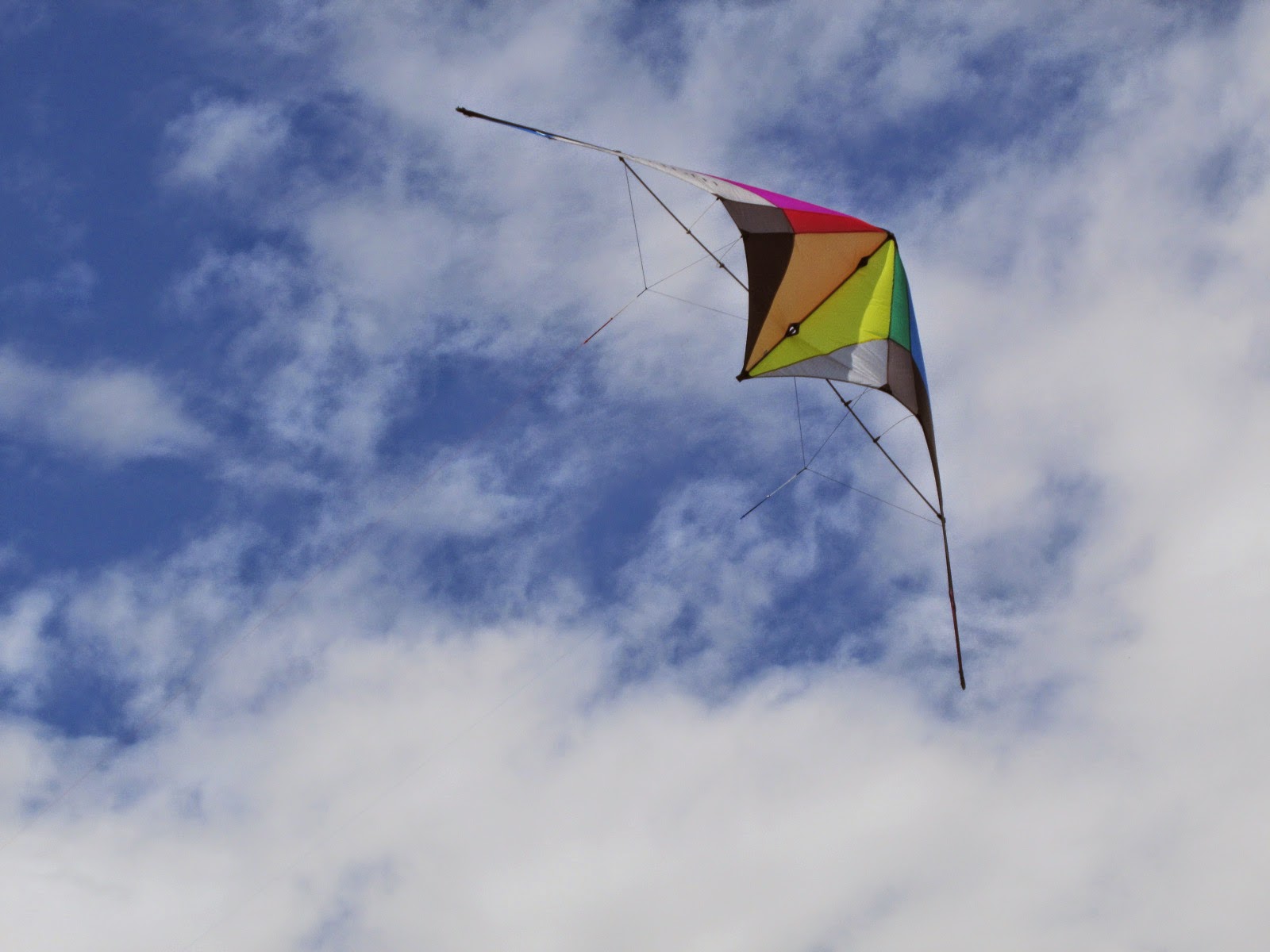 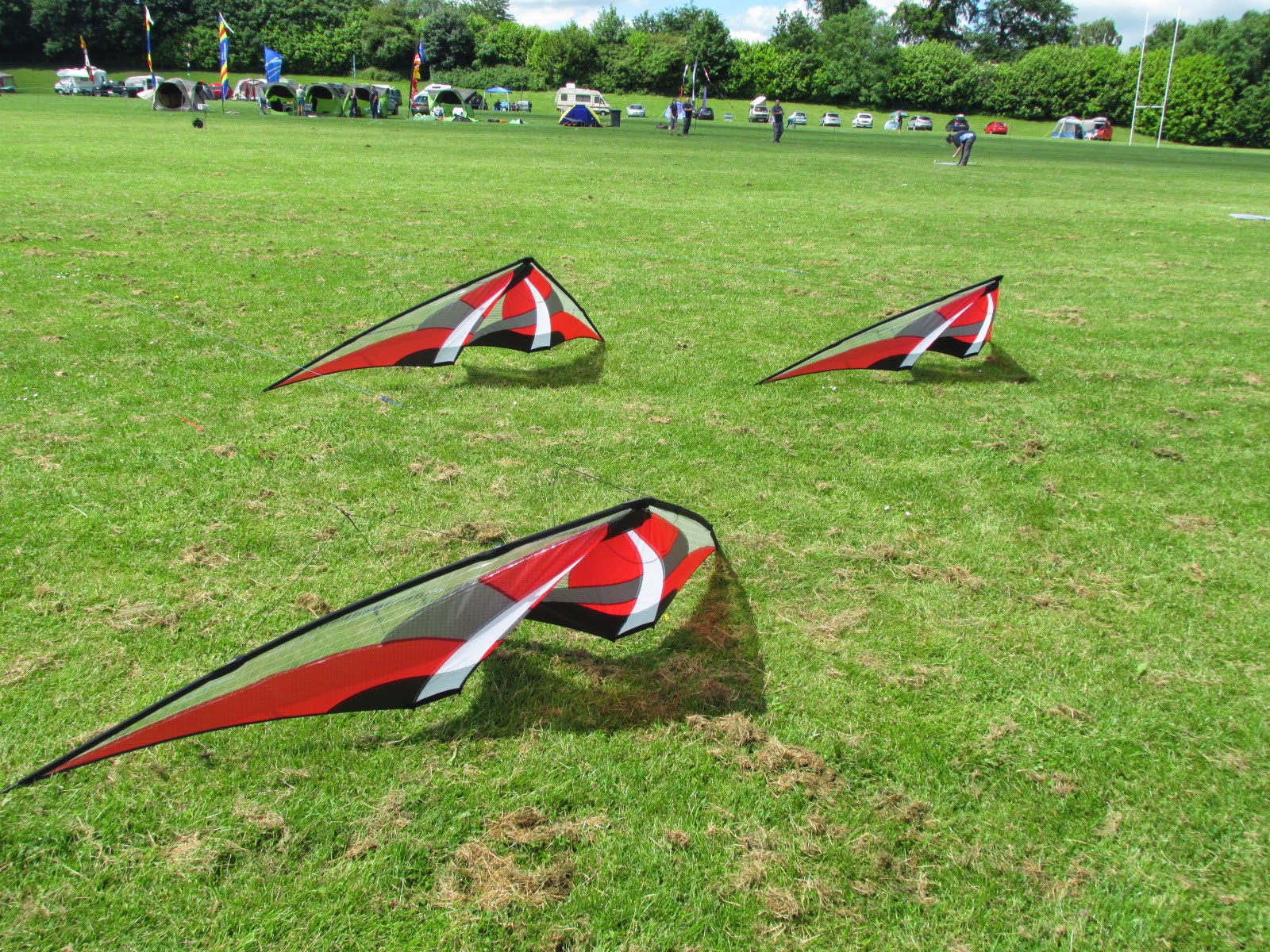 Ex-Grads (or, I should say Airheads, given that Keith and Vee have retired their pairs name when they retired from competition this year) flew on Sunday only. Like us, they flew Airdynamics T5 kites, and, flying immediately after us, tried to fly a routine which had a really different 'feel' from ours. 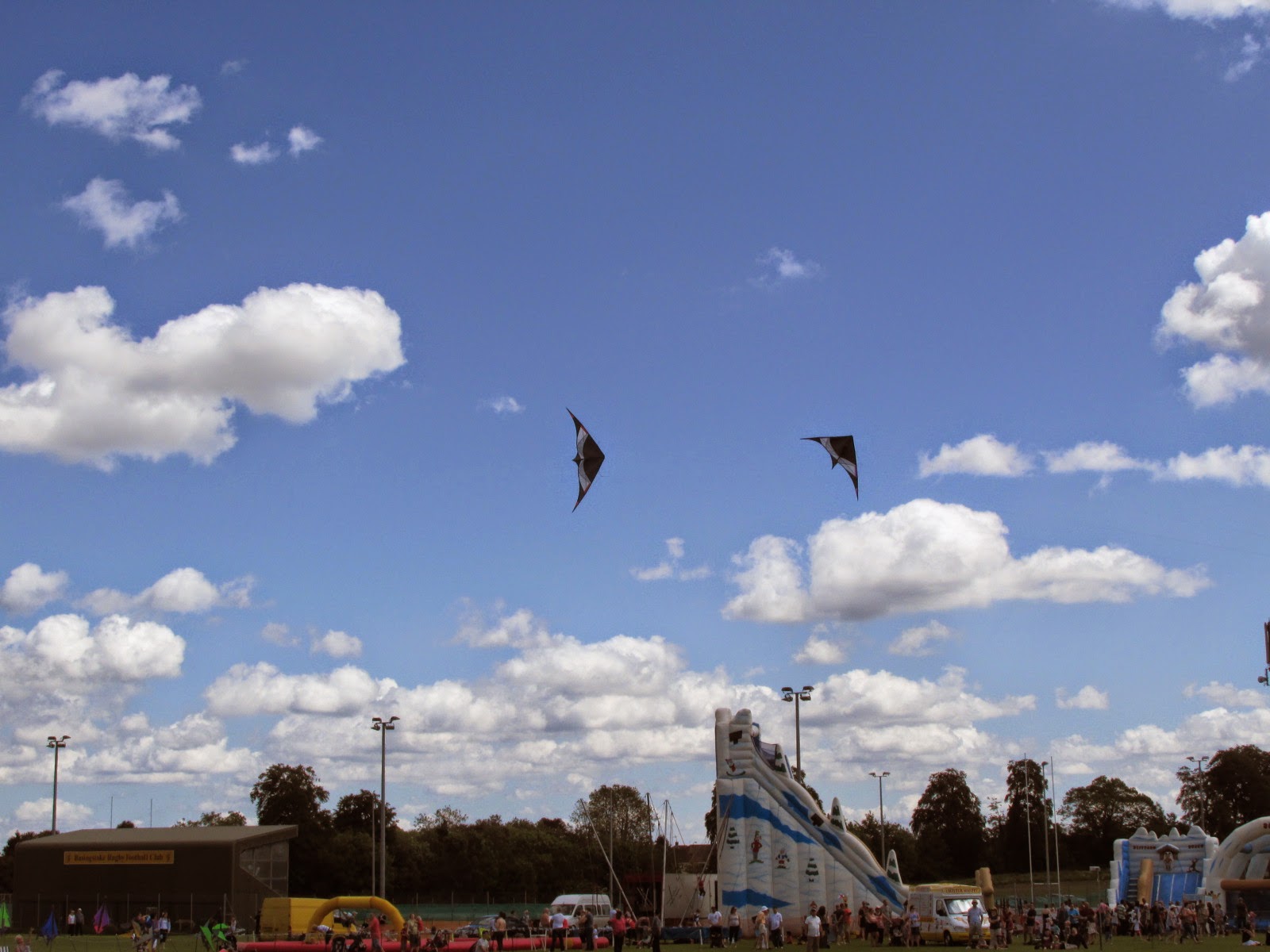 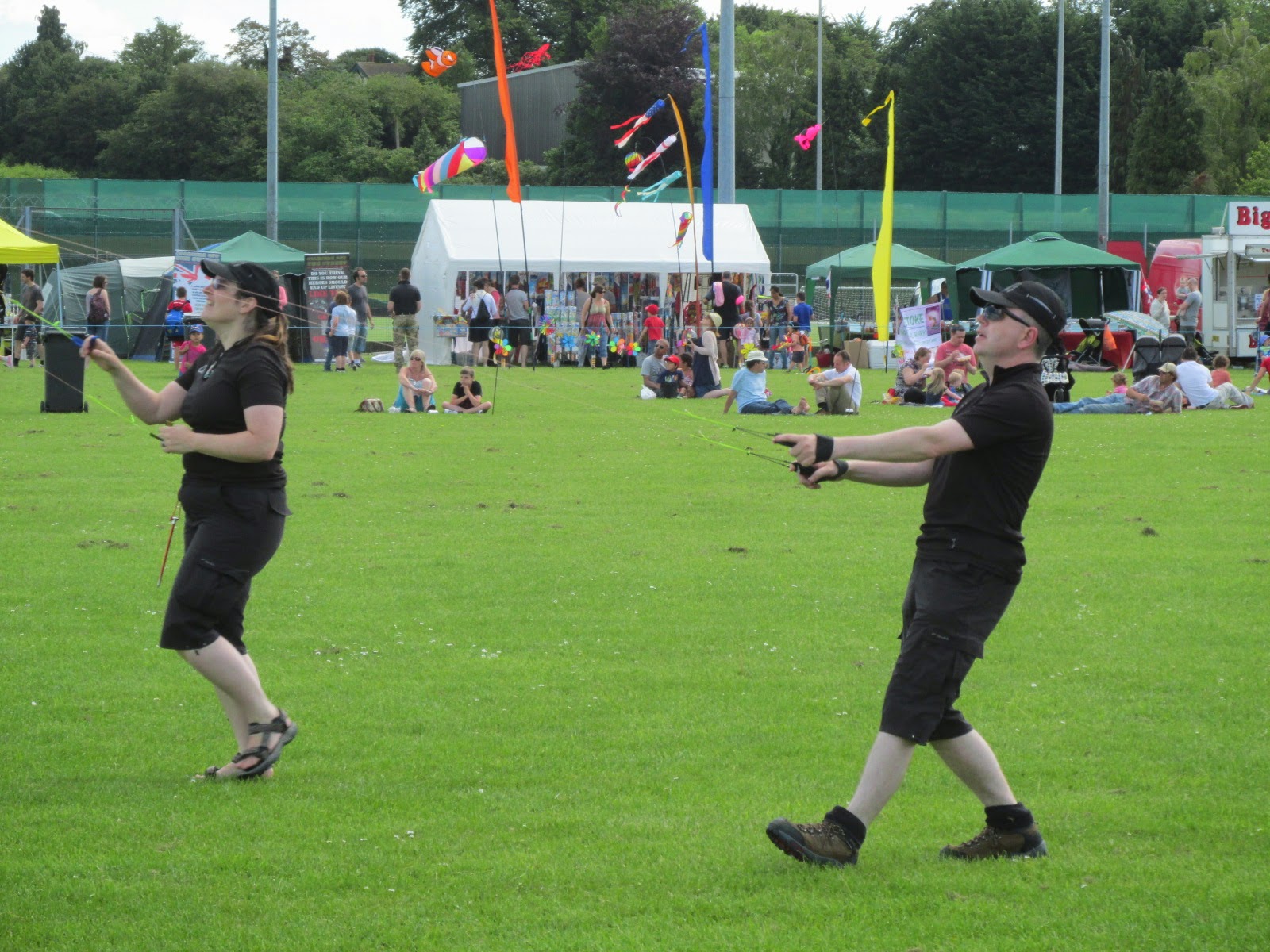 Yet more Airdynamics T5s were in the air thanks to Josh Mitcheson flying his three gorgeous black 'n' fire kites. 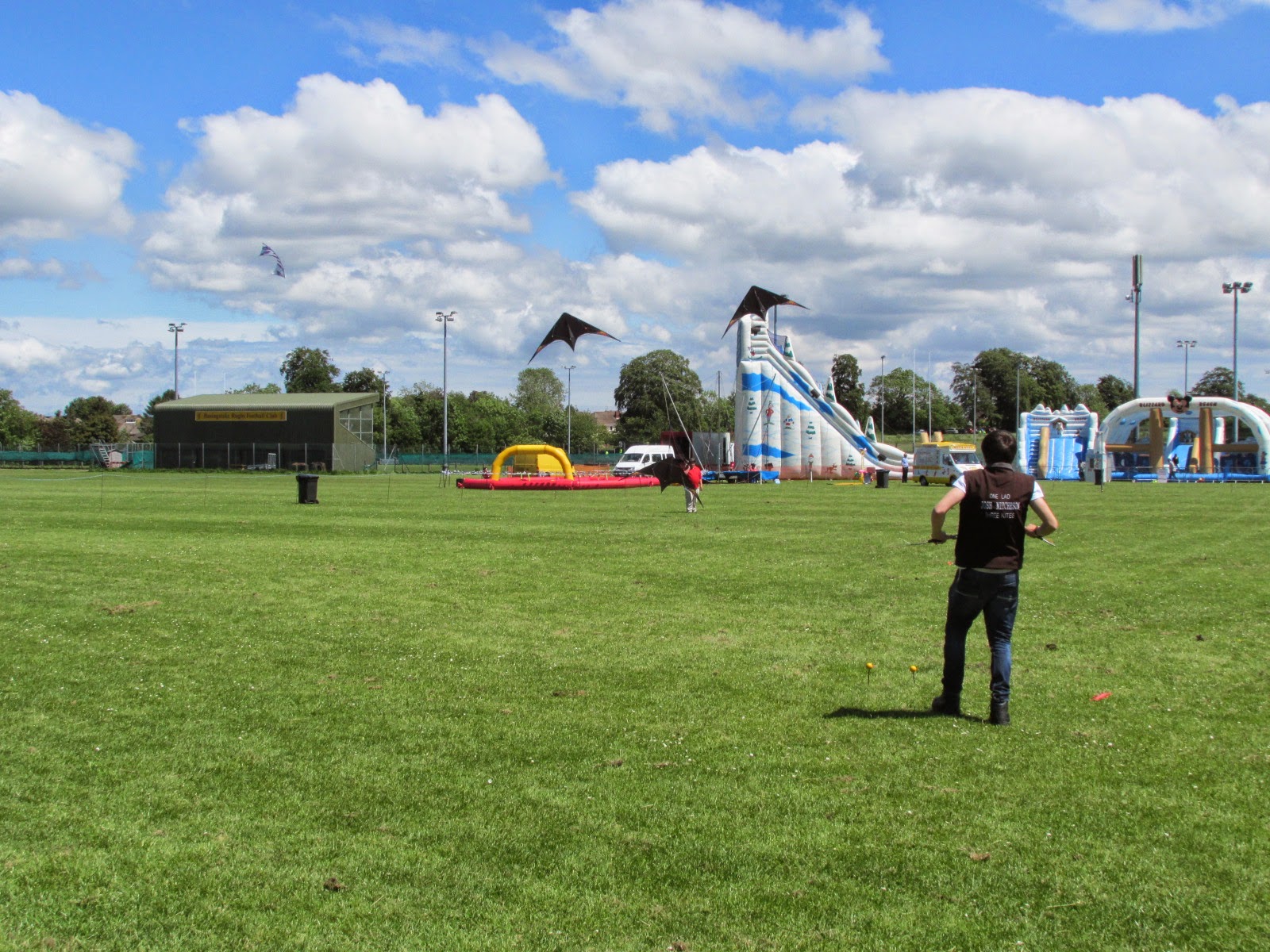 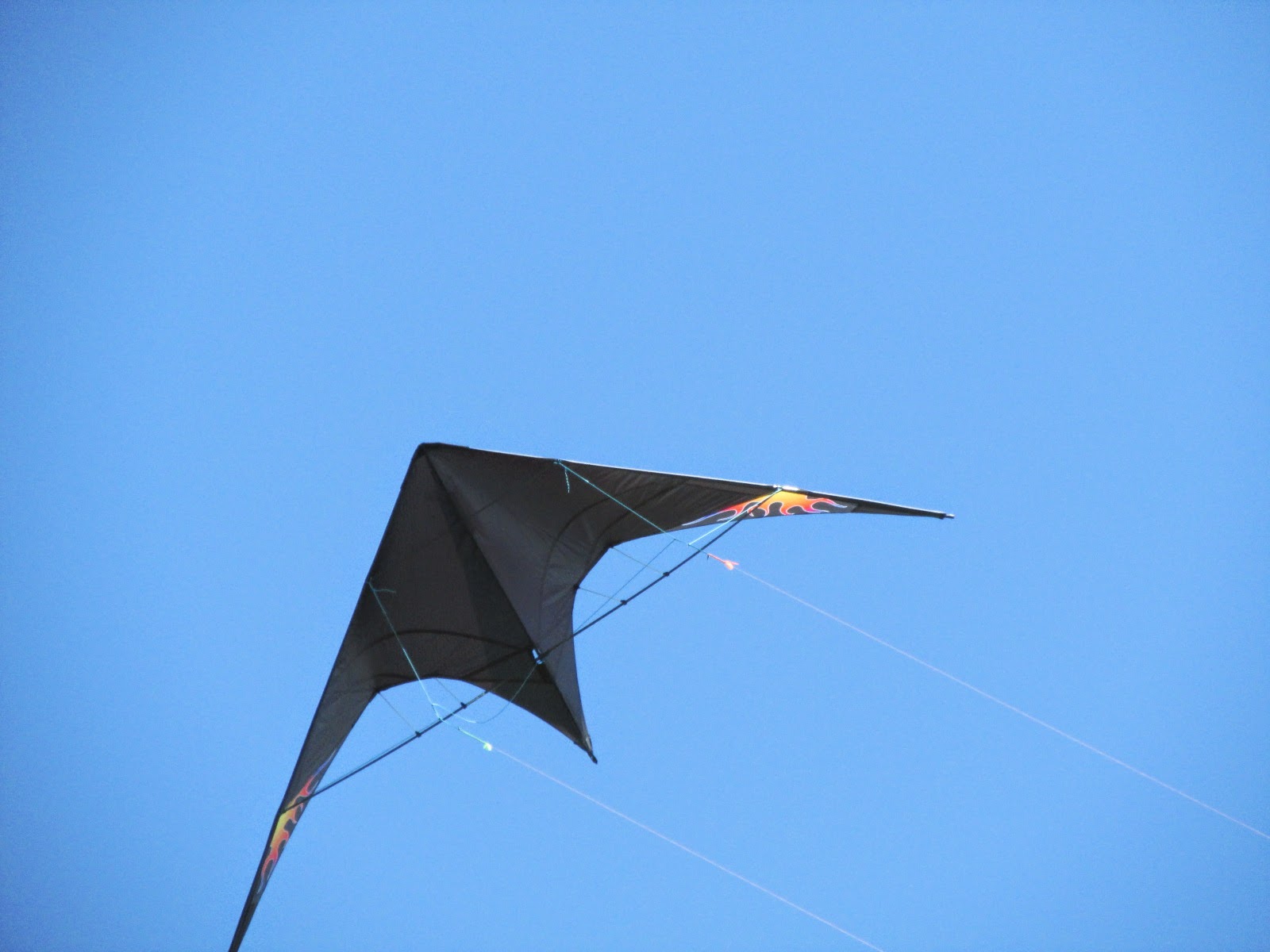 Doubling the number of lines brings us to The Flying Squad. I don't think I've ever gone to Basingstoke Kite Festival and not see them perform. Prior to flying their routine using their trademark white/blue Revs, they warmed up with Cuban Revs, which I hadn't seen them fly before. 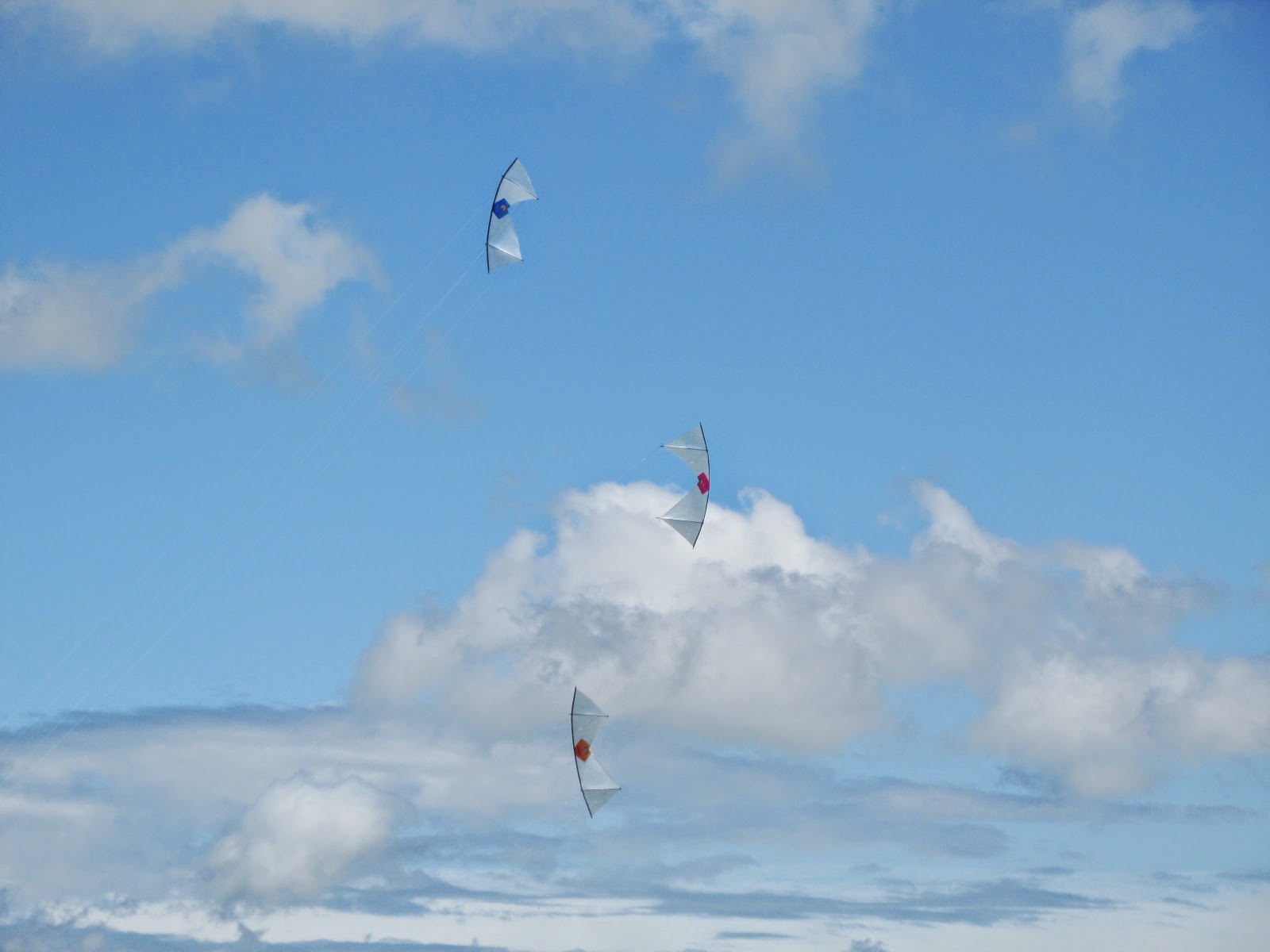 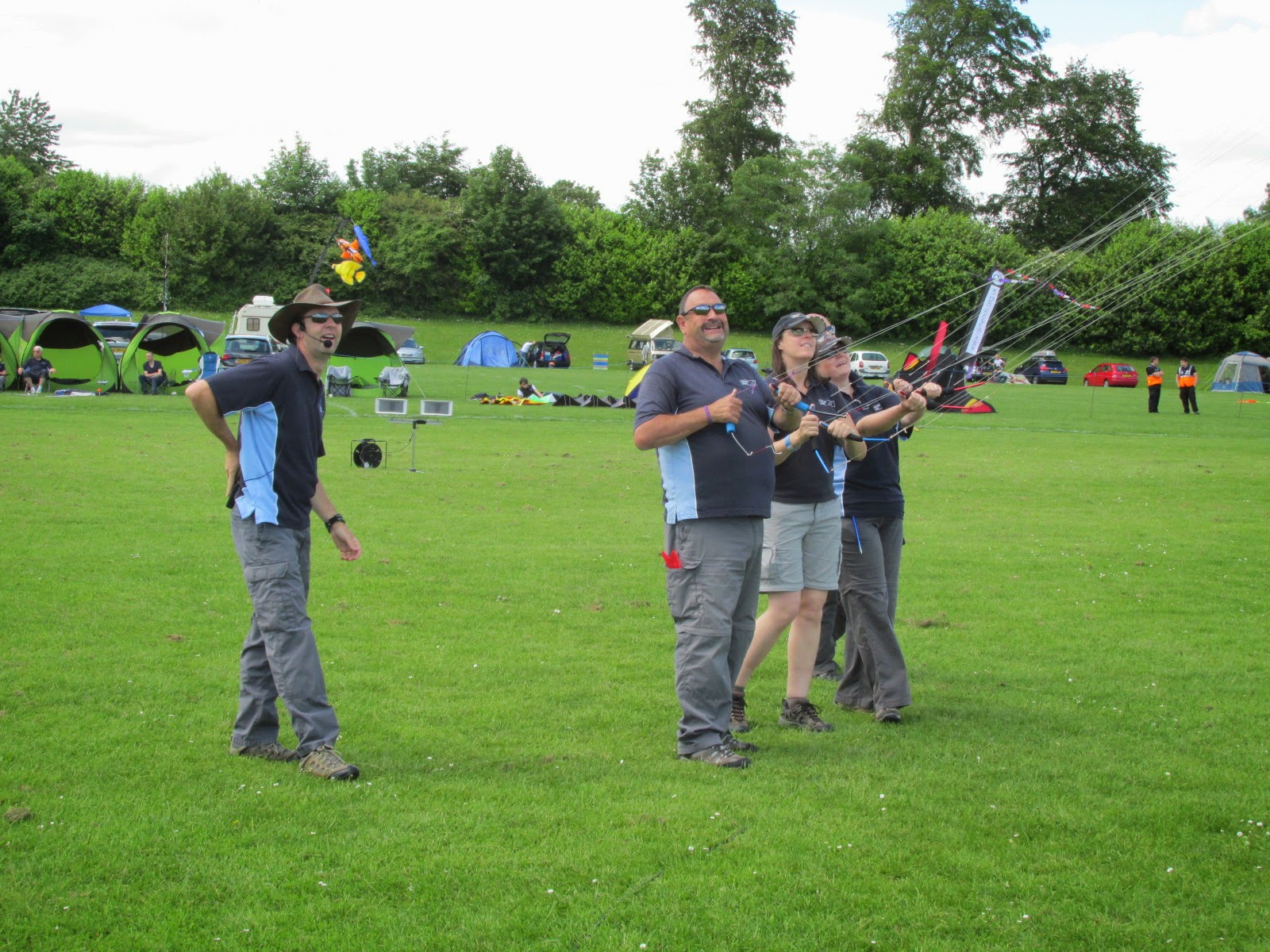 A mega-team concluded the Sunday programme, combining Barry Savell (of Flame), the Airheads (now including Peter Taylor) and us. Or, at least, that was the plan. The wind had dropped down to almost nothing by 4.30 on Sunday afternoon, and after trying a few patterns, we were forced to give up. Especially our Cubans were really struggling; most likely due to ours not having been properly 'run in' yet compared to the others. 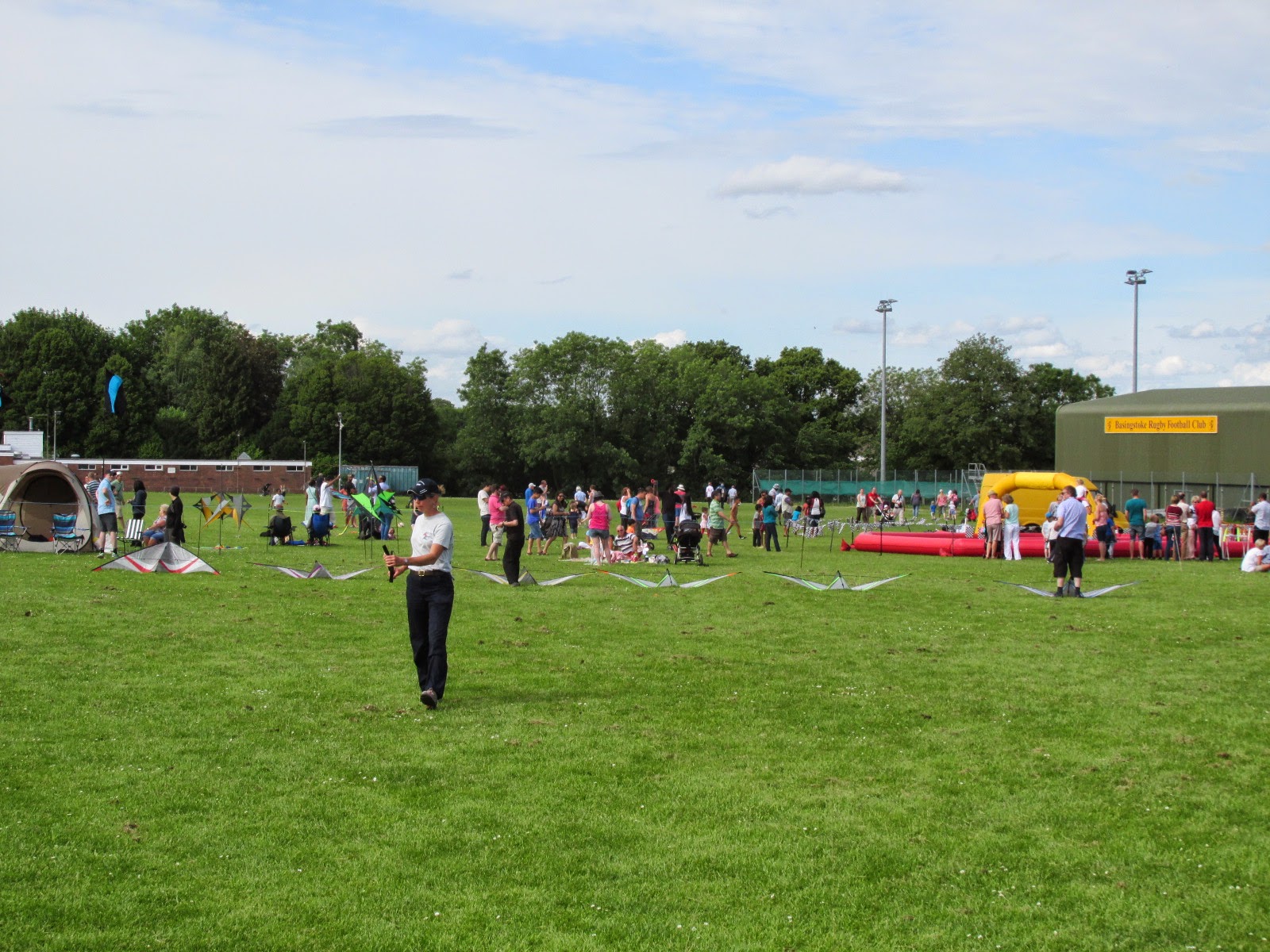 As always when I blog about a kite festival, I focus on the pair- and team-flying. Lots more happened, and more photos are here. I do want to highlight one event though: the mass butterfly-ing, in memory of Kelvin Woods. 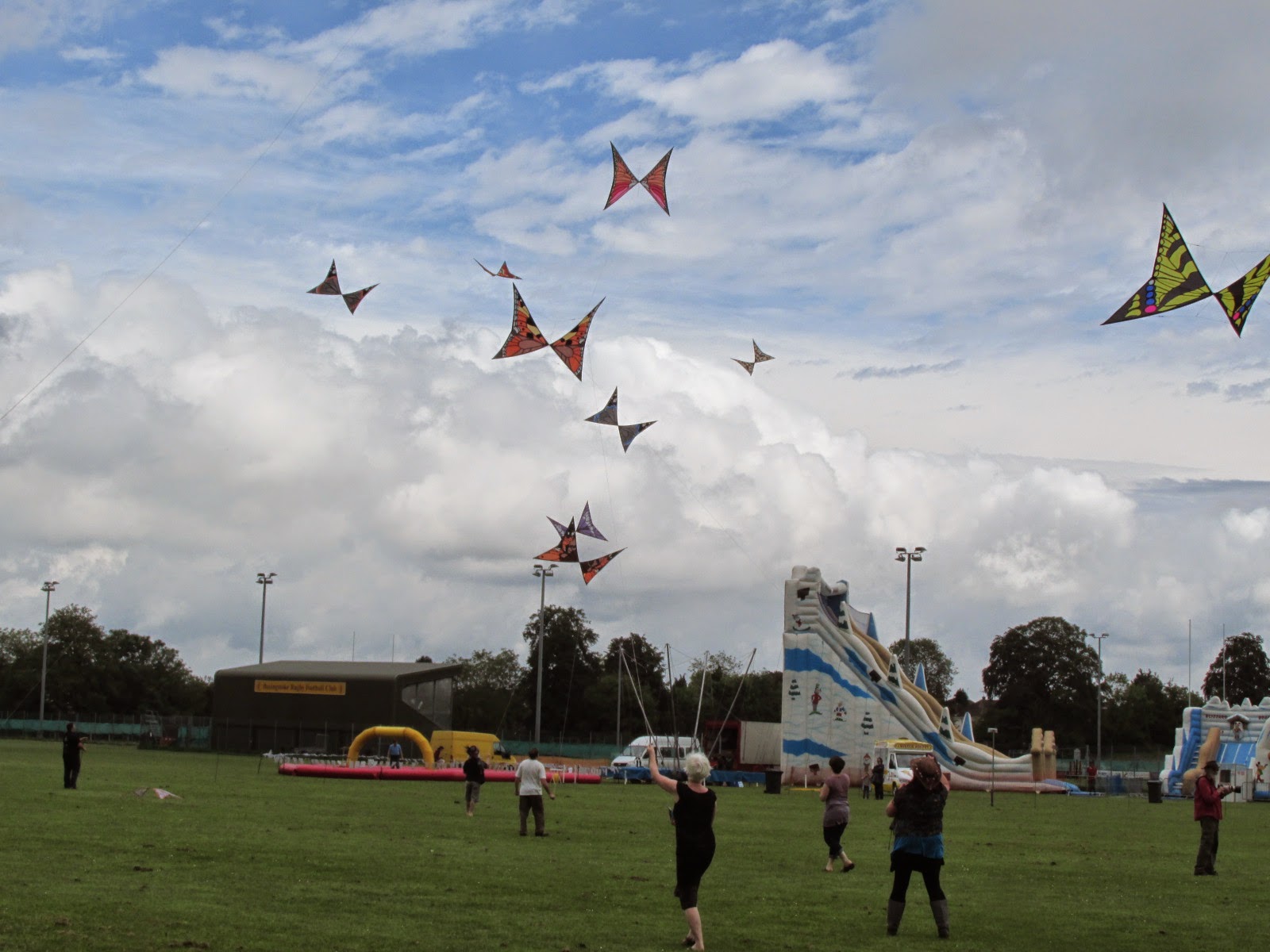 Credit for the pictures of us flying: Carl Wright (Team Spectrum)
Posted by flyingfish at 21:20 No comments:

In previous years, I've briefly posted the results of the UK National Championships in this blog (in 2013 and in 2012). The 2014 Championships were different for us in the sense that, a) we were there; and b) we were part of the competition! 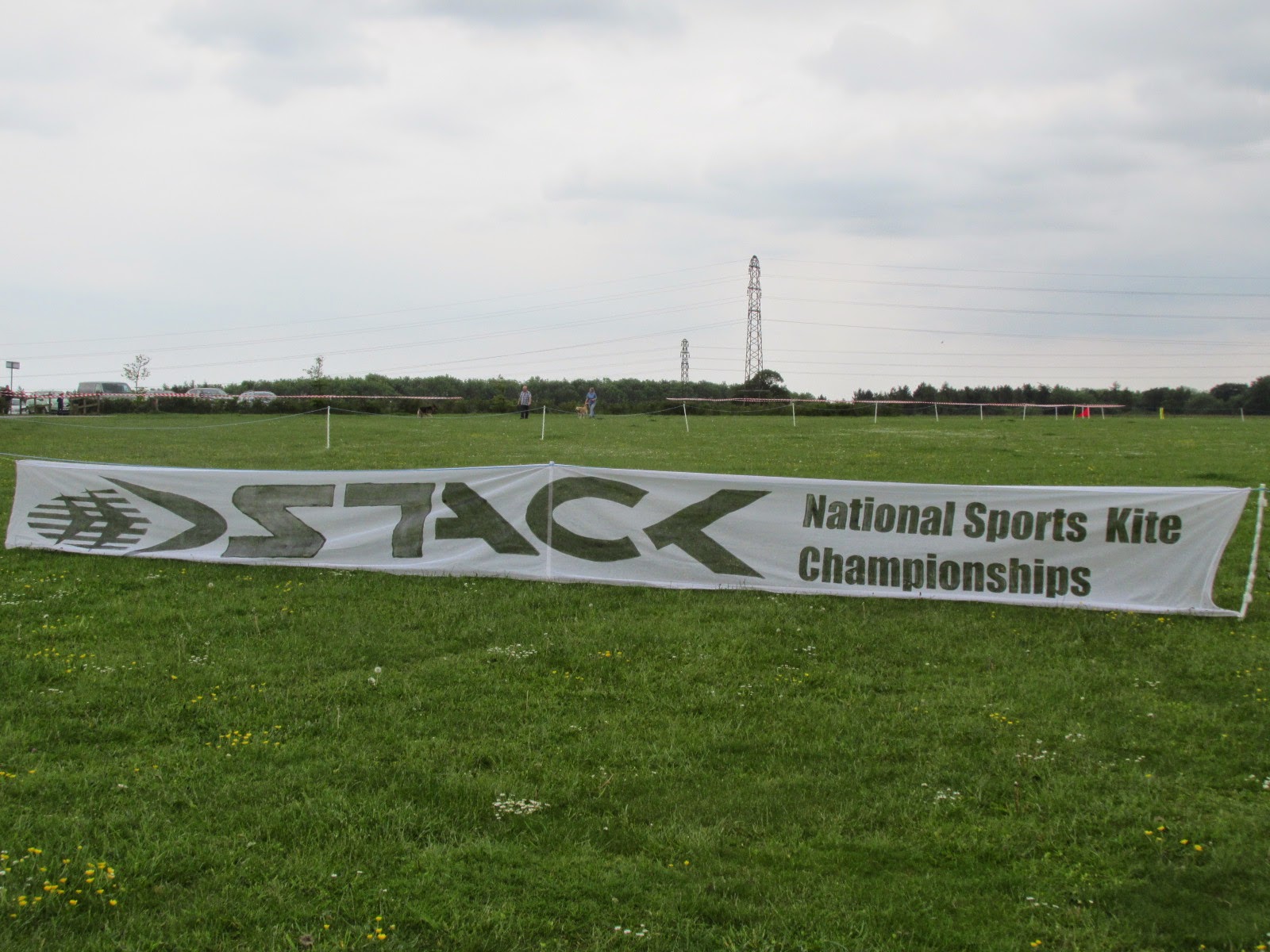 'There', by the way, is Dunstable Downs. Weather over the weekend of May 31 and June 1 was dry, but the wind was challenging: it often wasn't there ... On Saturday, we had 0-5mph, with a wind that had a tendency to drop away completely mid-figure or mid-routine. On Sunday, it was mostly thermals and 3mph was considered a gust ...

Competition format consisted of three figures plus a ballet. Two rounds for individual, pair and team precision on Saturday, and one round for freestyle on Sunday. The intended third round for individuals/pairs/teams on Sunday never happened due to frequent wind recesses; there was a struggle to complete even the single freestyle round. So, without further ado, the 2014 winners are ... 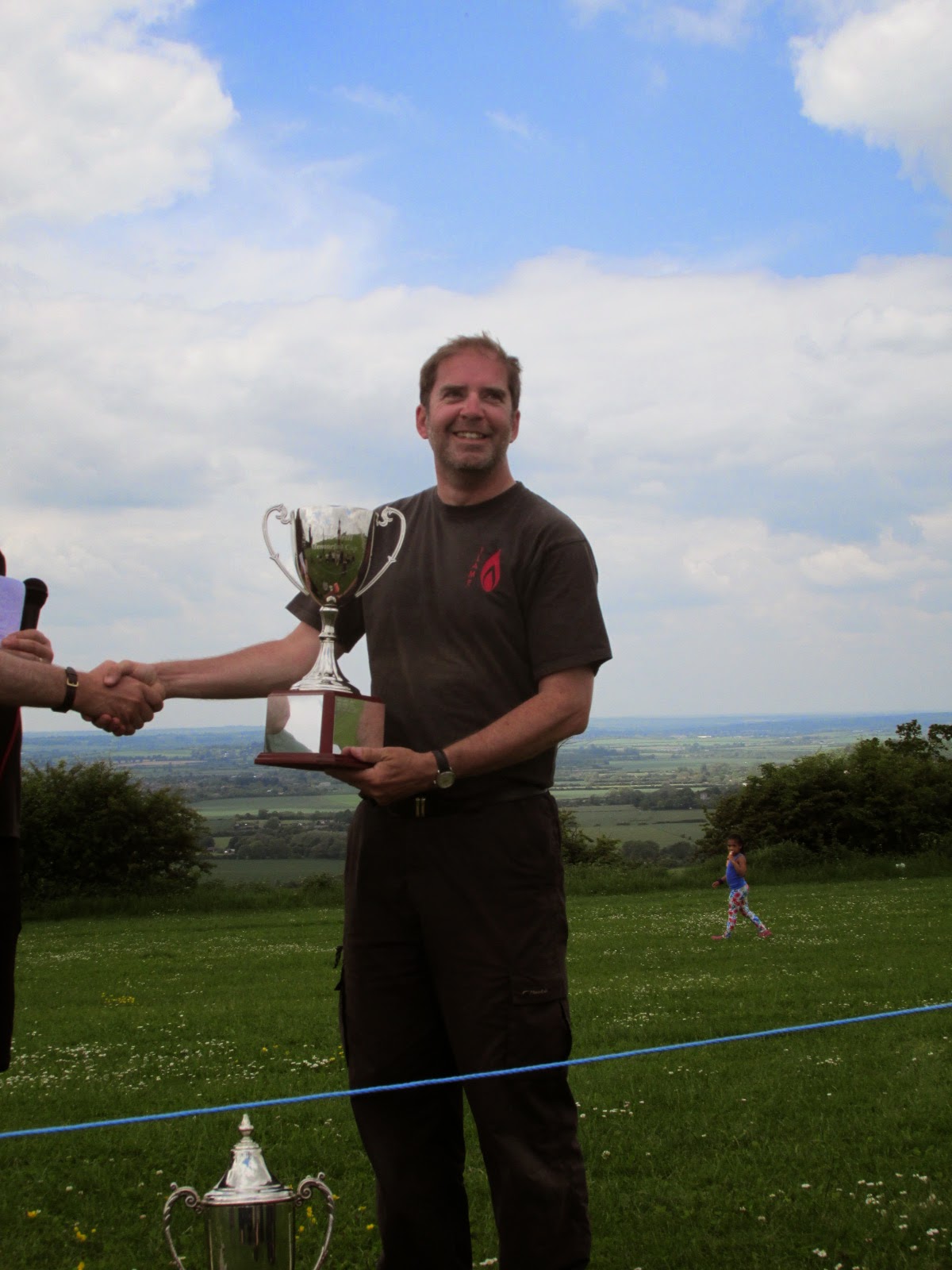 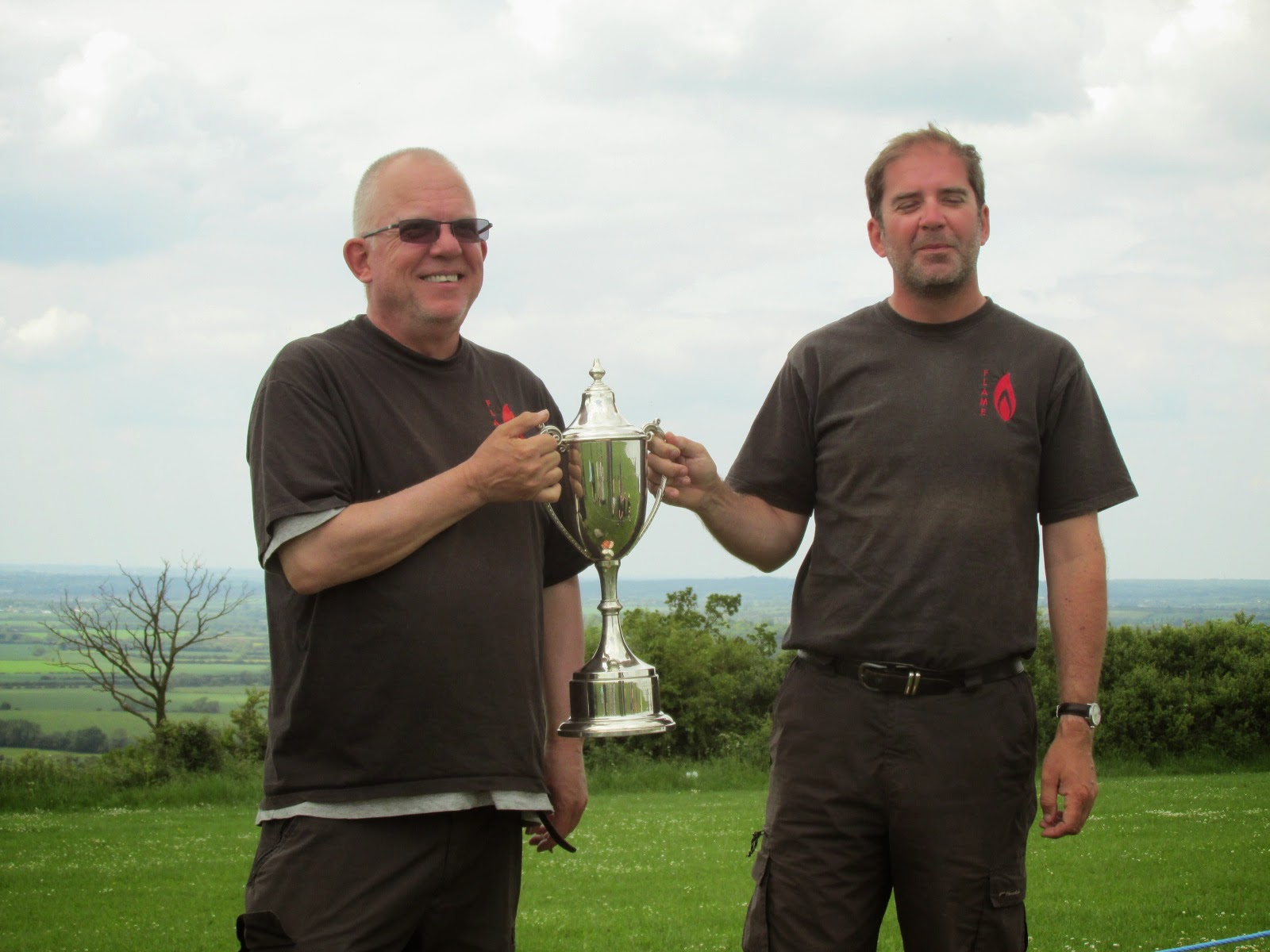 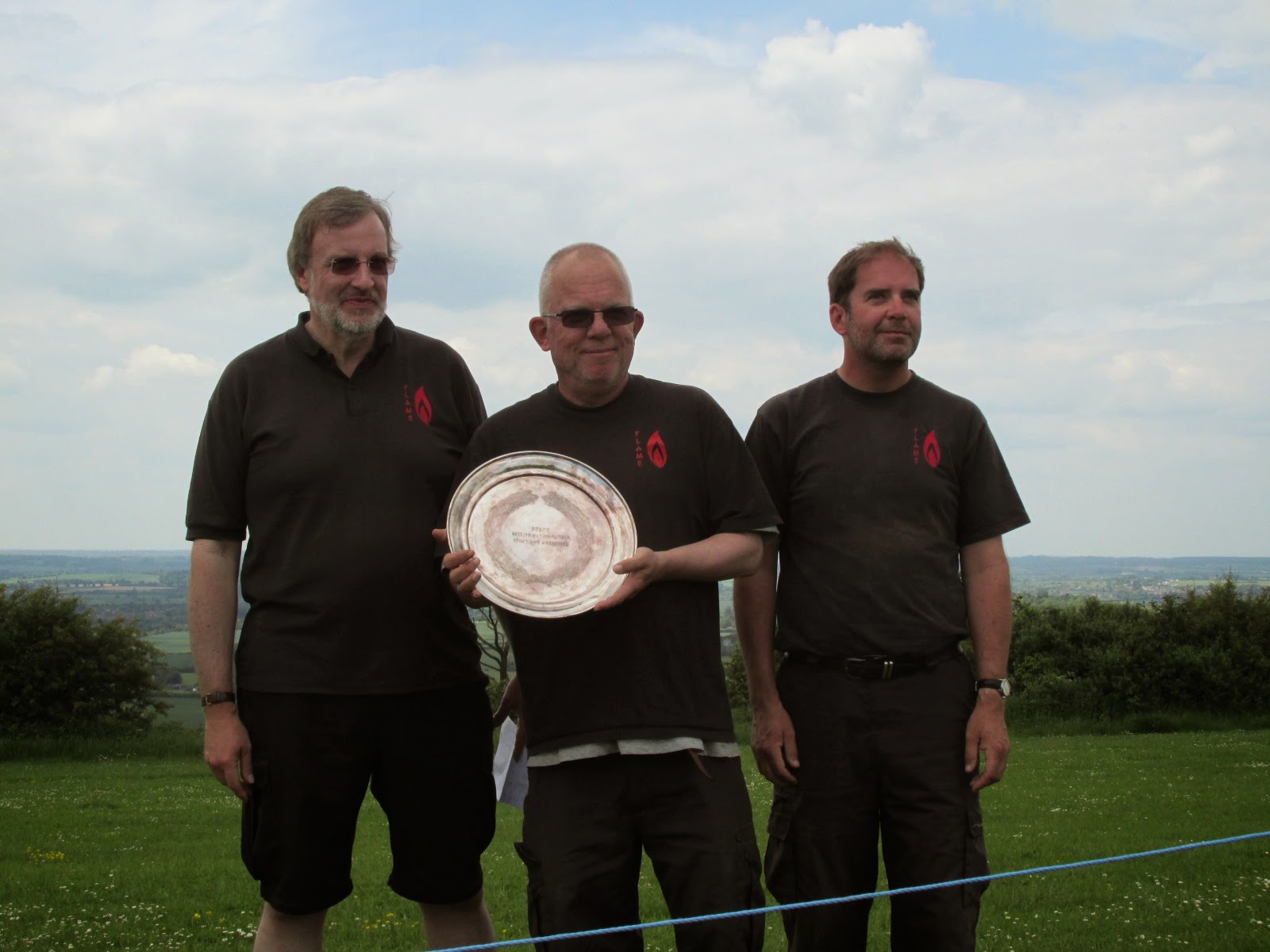 Yes, Tony has his polishing sorted for the coming year ... 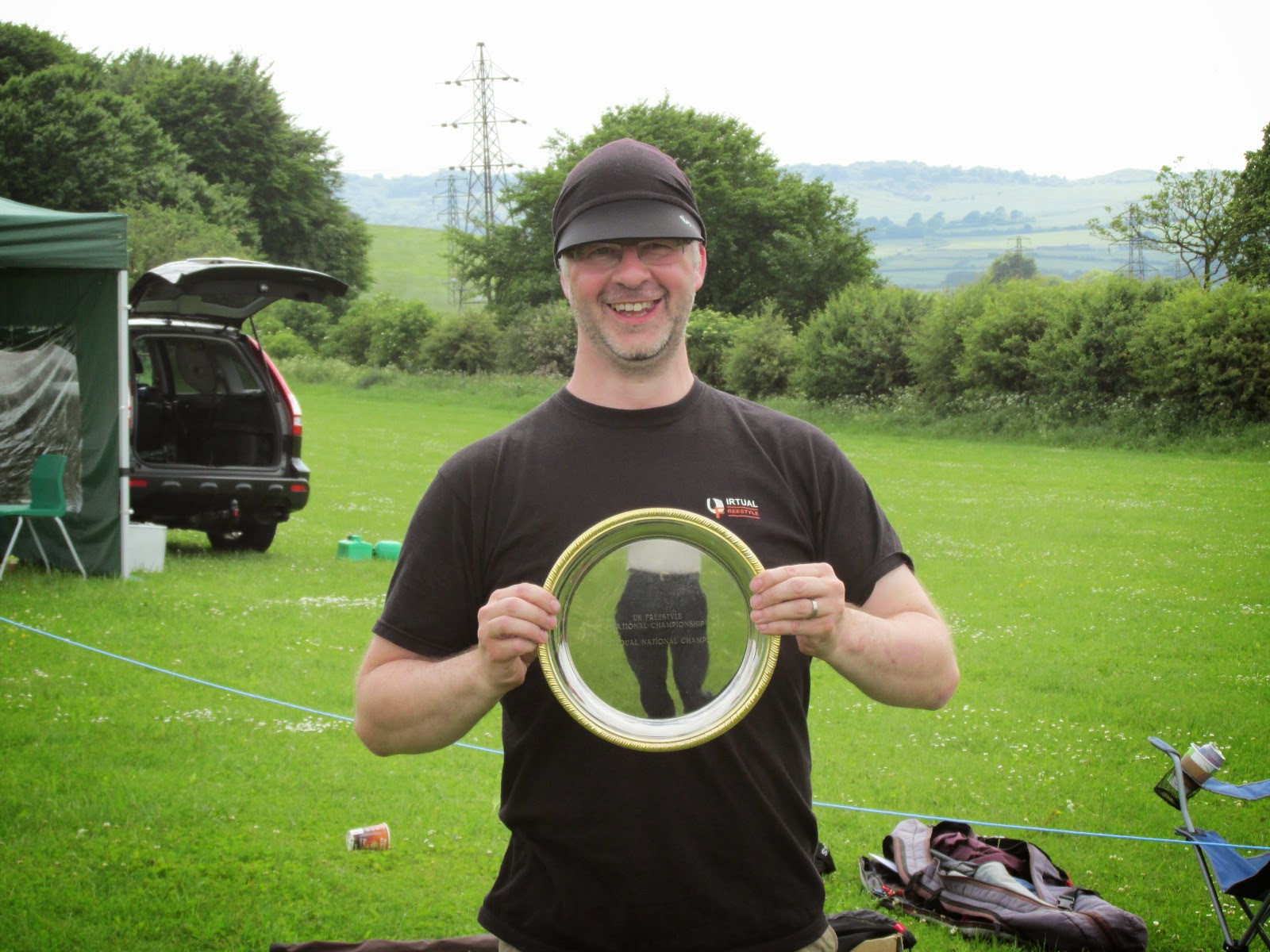 And what about Flying Fish? We struggled a lot with the very low or non-existing wind, we made mistakes, we didn't fly nearly as well as we could, but we got through our first two rounds of competition at national level. And I didn't forget even once to call 'in' or 'out', which is something I was quite concerned about beforehand (simply because we're not used to doing that when we fly at festivals). 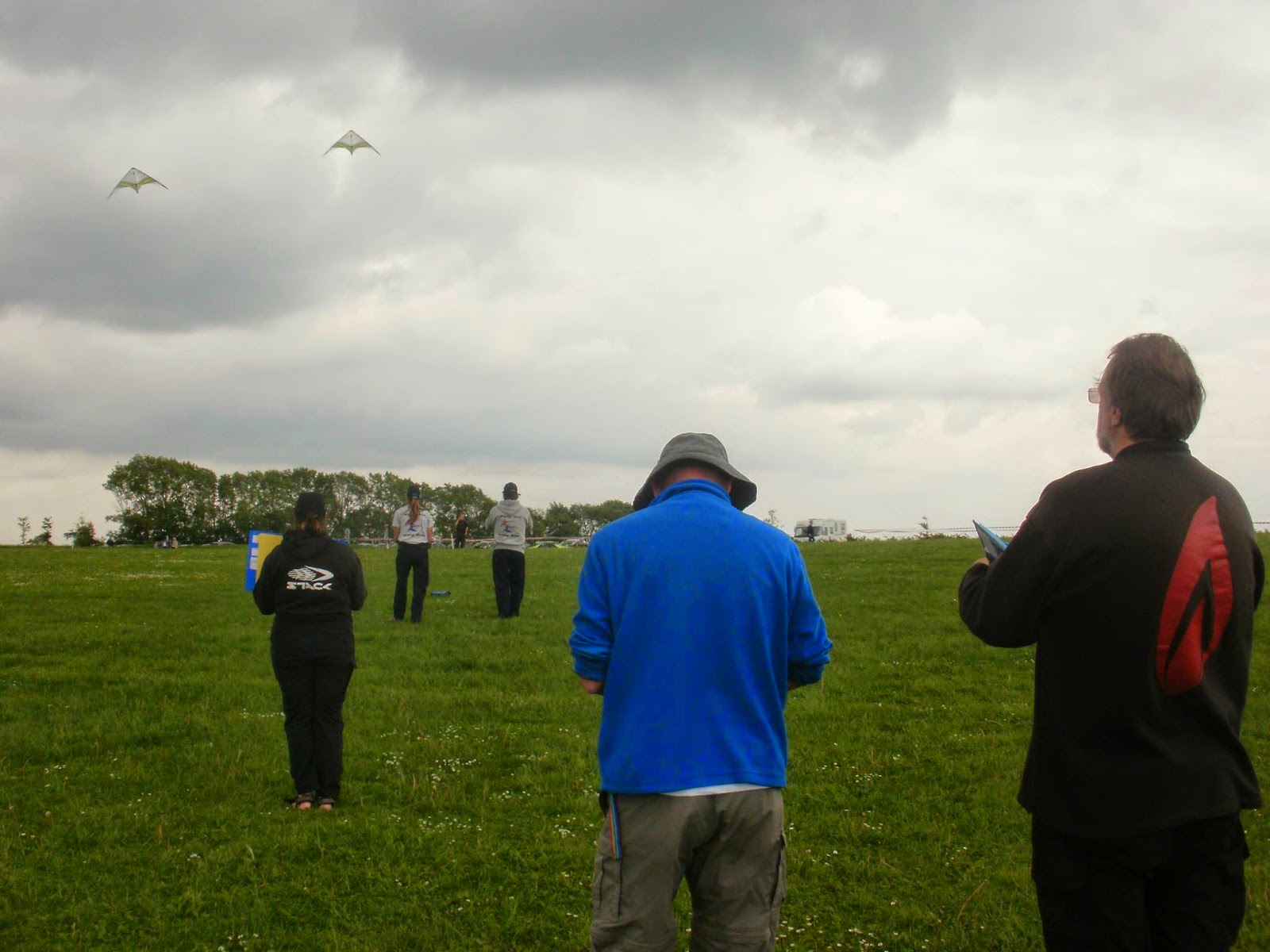 Of course, the day was concluded with a mega-team, with up to 10 kites in the air at the same time: Flame (3), Andy Taylor, Flying Fish (2), AirHeads (2), John Williams and Steven Hoath (of The Flying Squad fame). 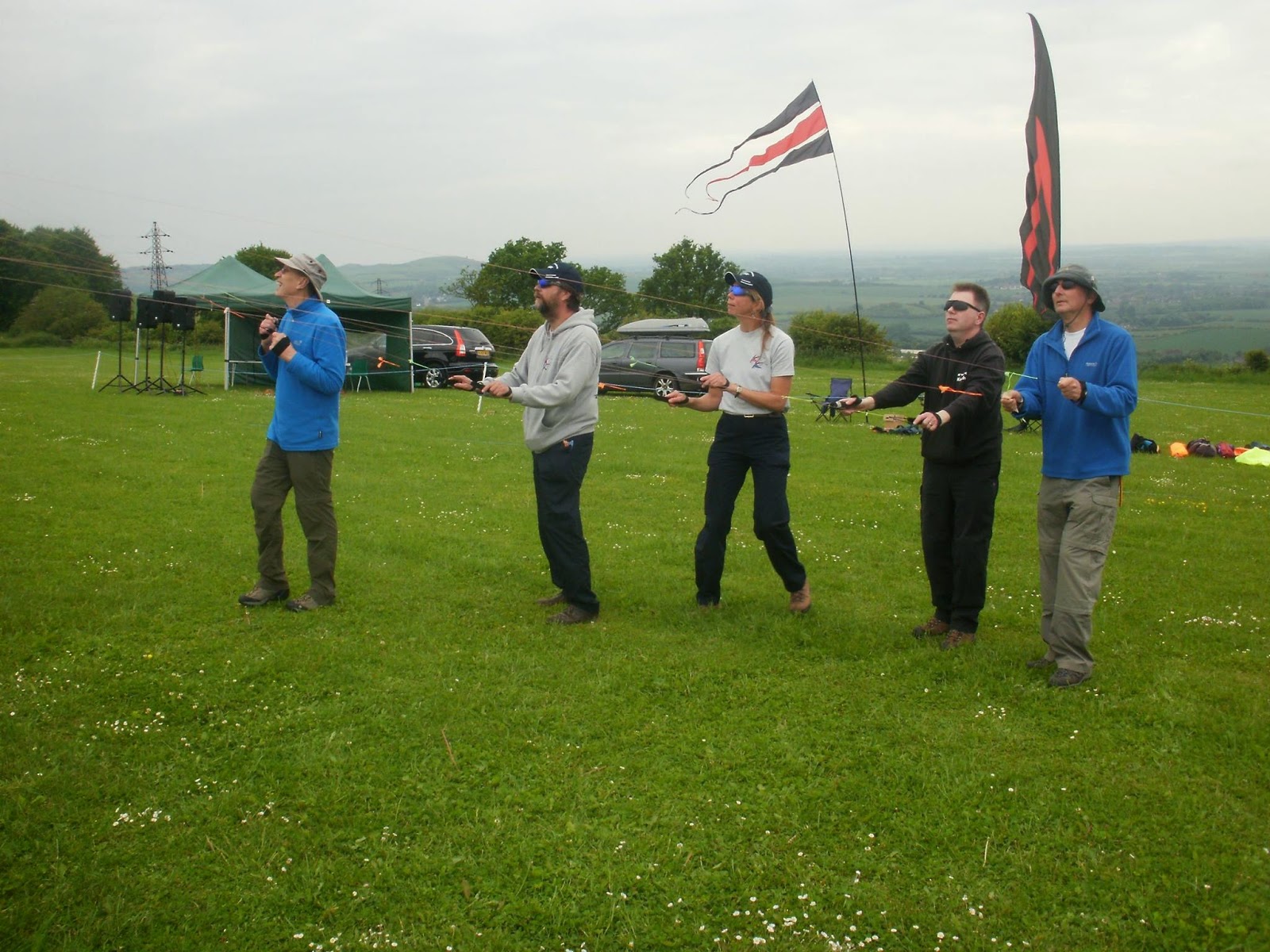 In the end results, Phoenix beat us by a mile and then some, but nevertheless Flying Fish is now officially 2nd in pairs in the UK, and Champions in the Experienced Class! 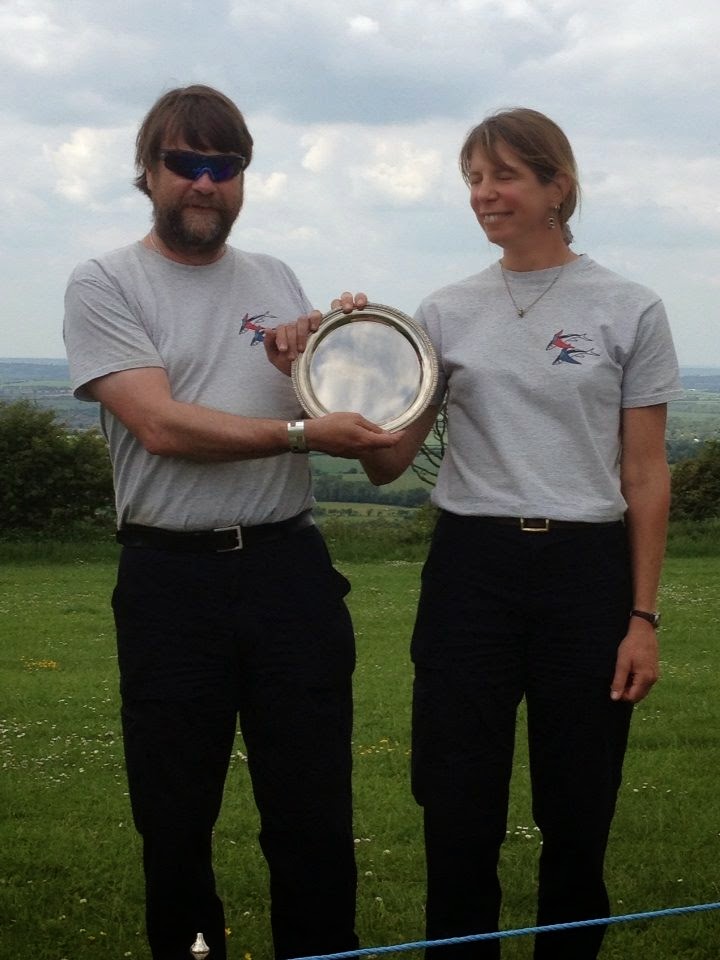 Now of course, you can point at the inevitability of us coming second when only two pairs competed and there was no chance of beating Phoenix (unless they were forced to fly blindfolded and with one hand). But I'd say this in response: First of all, it's not our fault that, besides Phoenix and us, no other pair entered the competition. Whatever their reason, all other UK pairs 'failed' to clear the first hurdle, which is to be in the arena, on the day. And secondly, we didn't just show up, launch and crash a kite, get 0 points and come second. Given the challenging wind, and despite all the mistakes we made, we feel we performed at a level we don't have to be ashamed of. Both Keith Griffiths and Barry Savell said that the scores we got at our debut (overall 47.8, with most scores in the mid to high 40s and a few in the 50s) were higher than the scores they got at their respective debuts. Or, as Barry put it succinctly "Your debut scores piss on our debut scores". 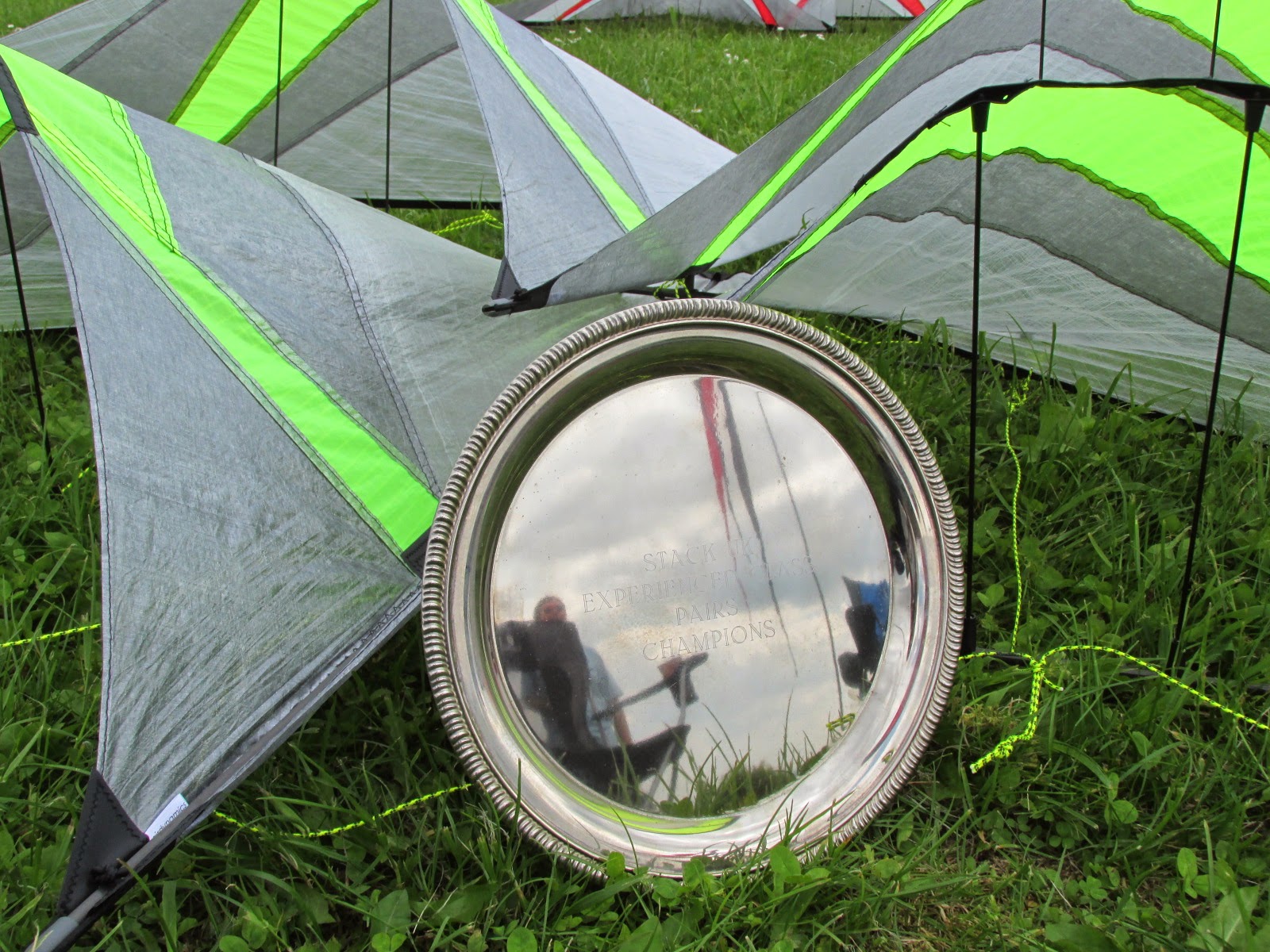 And winning a piece of kite-flying silverware does feel like a reward for all the hours of practice we have put into our pair-flying over the last few years. So we feel pleased.

Full results of the weekend, including updated UK rankings (where we enter in 3rd position, behind Phoenix and Ex-Grads), are on the STACK web-site, and more photos of the event are here.

Additional picture credits: Simon Dann (us flying) and Andy Taylor (us with trophy).
Posted by flyingfish at 20:54 No comments: