Following on from a successful test flight with a larger, stronger frame, the next stage in my Target Kite project was to add a keel and rudder. As always, pictures of the building process can be found here. So here's the rudder on the kite on the ground: 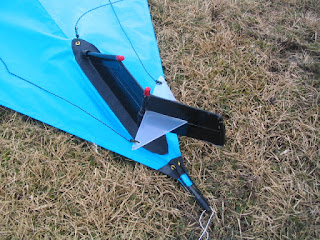 And here it is working in flight! 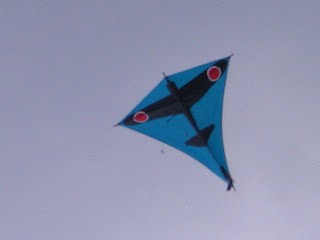 And finally, a video, first showing the rudder working close-up, and then showing the kite flying with a working rudder.


In case you're wondering: as far as I can tell, the rudder does not have a major effect on the control of the kite. Flying a Target Kite with rudder didn't feel very different to me compared to flying one without. Can't say I'm very surprised about this, as the steering is mostly by pulling on one wing or the other, and the effect of the little piece of plastic on the tail of the kite is bound to be small. And you may have noted that on my kite the rudder is larger relative to the keel than on the original Target Kite ... Did it really have a significant role in steering the original Garber Target Kite??

So what's next? Make another keel + rudder for the Target:FW kite, and the Target Kite project is completed!
Posted by flyingfish at 17:42 4 comments:

Basingstoke Kite Festival was the first kite festival we ever went to when we started flying kites, and we've been there every year since. Late last year, the organisers expressed an interest in us flying in the arena in 2013, and I just received confirmation that we will indeed fly at Basingstoke Kite Festival on June 1 & 2!
Posted by flyingfish at 08:05 No comments:

Some time ago, I blogged about Team Impossible, and especially their routine flying Flexifoil stacks. Given that so few kiting teams in the world fly Flexi-stacks, would that be something for Flying Fish to add to their quiver? I managed to get my hands on a 2-stack of the smaller Flexifoils (Stacker 6, Gold colour scheme) off eBay for a very decent price, and that allowed us to try them out, and see if they'd be suitable for a pair routine.

Stoney Cross Plain, on a beautiful cold day, and with a blustery wind: 10-16 mph, with gusts up to 25mph. 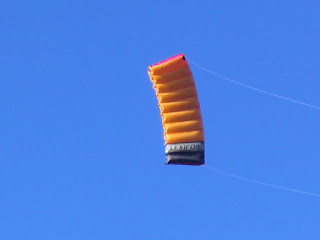 The Gold Flexi-stack flew fine, definitely pulling, but not too bad, and remaining very controllable despite building up considerable speed. Of course, sharp angles are not possible, but smaller and larger loops and circles came out pretty reliably. 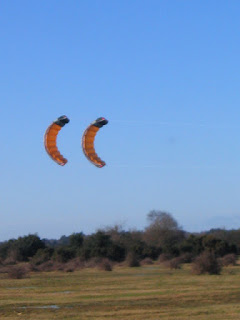 So far, so good! But a key requirement is that the Flexi-stack can be launched by one person, as it becomes rather difficult flying a pair routine if one of the pair needs the other to help launch the kite .... Of course, at a festival you have ground crew to do that, but ground crew is usually not available during practice.

Fortunately, it turned out not to be too difficult to launch a Flexi-stack without help. With both kites flat on the ground, a few tugs on the lead kite usually made it come off the ground a bit. Trick is then to power up straightaway, and the lead kite will pull the second kite along. I'm sure we'll get better at this with practice, although we may have to launch our kites before the music starts, and then start the routine with the kites high up in the window rather than on the ground (and maybe finish high up as well??).

We've pretty much decided we are going to get a second Flexi-stack given our first positive experience. No rush whatsoever, so we can afford to be really picky when it comes to the colour of the other stack. We have to like the colour on its own, and it has to contrast nicely with the gold!

Vistaprint had a good deal: 500 business cards for £5. In the end, it turned out a bit more than that, because they didn't mention that, if you want to design your own (rather than use one of their existing templates), every picture you upload will cost extra. And the price was quoted without VAT and without shipping. Nevertheless, we took the opportunity to get business cards for Flying Fish, so that we can hand them out at festivals or displays, or during practice sessions, should people be interested in a bit more information about us. Spent half an hour or so playing with photos, our logo, and text/fonts, and this is the end result: 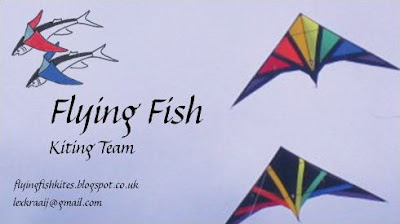 Very pleased with how they turned out! If you want one, come find us at a festival this year. And why not collect them? Try and get a business card from each of the UK kiting pairs and teams (;o)!
Posted by flyingfish at 18:11 3 comments:

Besides Flying Fish, L-katz is also invited, so we'll be flying at least two routines per day. Check out the festival's Facebook site or the club's Festival page for updates on who else will be flying.
Posted by flyingfish at 08:17 No comments:

Time for an update on my project to build two modern 'replicas' of the Garber Target Kite. During the first test flight, it became clear that the 6mm frame was too small and flexible, giving too much billow to the sail. As a result, even though the kite flew, control was not what it should be.

What have I done since? Made the sail for the second of the two Target Kites, this time showing the silhouette of a German Focke-Wulf plane. Built a new, slightly larger frame, now using 8mm carbon. Bridled the Target:FW kite. So the key question was of course: does the kite fly better with the new frame? 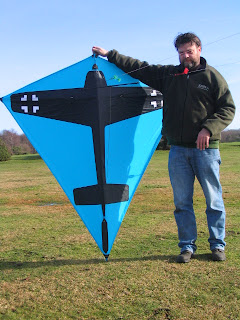 Wind was 6-12mph, so slightly stronger than last time. And boy, oh boy, did the new frame make a difference! 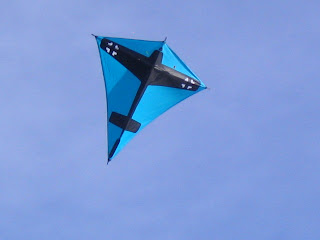 Much less flex in the frame, much less billow of the sail (just compare the picture above to the one shown here), and much better control! But don't just believe me; judge for yourself (and, again, compare this video with the one here):


Now watch this promotional video from the 1940s, and compare the way my modern replica flies with how the original Target Kite flew:


You have to admit I'm not a million miles off!

OK, next thing to do, obviously, is to make a second frame like this for the Target:Z kite. And then I need to start thinking how best to build the rudder. Even though I can control the kite and even fly pretty small circles without the rudder, a modern replica of a Target Kite just has to have a rudder!

As mentioned before, pictures of the entire build process up to now can be found here. To be continued!
Posted by flyingfish at 18:30 4 comments: