It looks like 2019 will be a bit of a lean year for us when it comes to kite festivals. No Minchinhampton, no Dunstable, no Exmouth ... Fortunately, Streatham Common Kite Day had invited us back again, for our fifth appearance. Following last year's flooding and postponement, it was back to its mid-May slot, making it our first festival for 2019.

Weather was gloriously sunny.and the wind was .... well, what you can expect from Streatham: very light, sometimes dropping away to nothing, and changing direction a lot. But the show must go on, and we simply did what we could.

As Flying Fish, we decided to fly our technical routine to "Ruthless Queen", and incorporated a number of short-listed compulsory figures for this year into our make-it-up-as-we-go-along "Adiemus" routine. Good opportunity to get some extra practice for both of those elements, in difficult conditions, under our belt, given that we have mainly focused on our new ballet in training. I think we did all right; far from perfect, but we kept it flowing and didn't drop out of the sky (more on that in a moment). 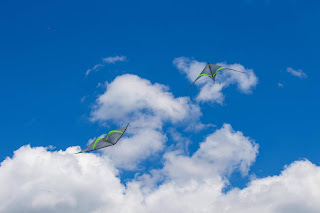 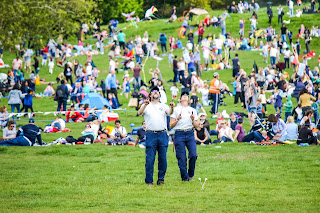 Besides Flying Fish, two more pairs were part of the show: Team Spectrum and Twisted Bridle. As you may be aware, we're more or less acting as coaches for Twisted Bridle, and I was proud to see them keeping everything going, despite the tricky conditions, and also flying their second routine at a festival for the first time. 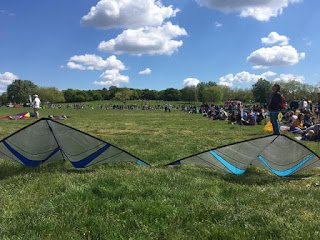 Team Spectrum was decidedly unlucky this time. They seemed to get all the slots where the wind just switched off, and despite being given a third slot (third time lucky?) by the organisers, they struggled to complete their routines, and fell out of the sky repeatedly. 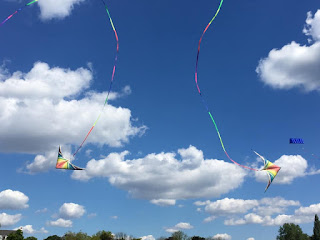 Even though they're not an official pair, I should definitely mention Carl Robertshaw and Josh Mitcheson, who flew impromptu quad-line routines with their Fulcrums. 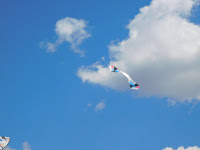 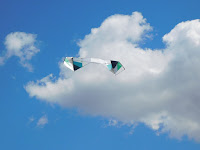 Flying Fish + Twisted Bridle = L-katz! As a team, we flew our choreographed "Gloria Estefan" routine, and, for the first time at a festival, our make-it-up-as-we-go-along new team routine to the "Targaryen theme" from Game of Thrones. 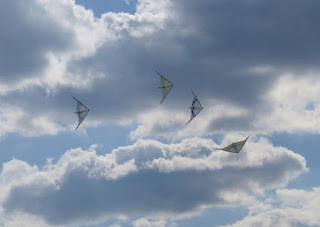 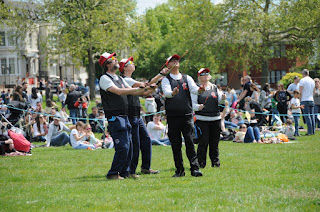 Due to the difficult wind, we kept it simple, and one comment on twitter from a member of the public said our flying was 'particularly magical'. I'll take that any time! 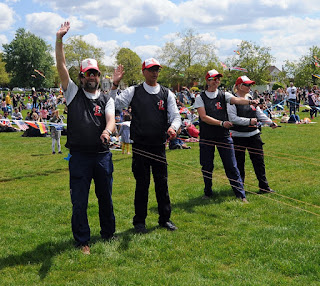 Take L-katz, add Andy Taylor and Josh Mitcheson, and you have a 6-(wo)man mega-team! Been a while since Streatham saw a mega-team flying in the arena. 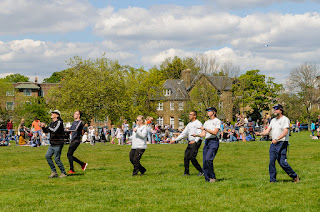 We struggled with the wind switching off at times, but I think we did give the audience a bit of an idea what mega-team flying is all about. 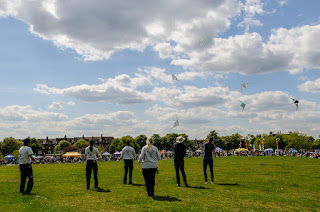 Kite Day at Streatham Common gave us a bit more than we bargained for, and we went home with more kites than we came with .... 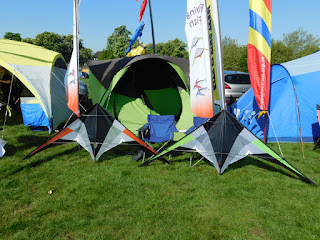 More on those two kites in a future blog post; stay peeled!