The Brighton Kite Festival weekend turned out to be slightly different from what we anticipated ... We went there on Saturday expecting to do what we normally do at kite festivals: enjoy the routines and other displays, talk to people, and possibly ground crew for one or two teams (Close Encounters was one of the teams announced to be present on the Brighton Kite Flyers festival web-page, and we've helped them on several occasions).

Shortly after we arrived, one of the organisers of the Festival came up to us, and said that he had heard we flew as a pair, that there was a gap in the program (due to an apparent misunderstanding, Close Encounters wouldn't be there this weekend), and whether we could maybe .... Well, we could, but there was one slight problem: not expecting to fly, we hadn't brought any kites ... OK, that did make things a wee bit difficult, but if we brought kites and music tomorrow, we would definitely get an arena slot. Our first invite to fly at a kite festival!! Yes, of course we flew at Southampton a few weeks earlier, but as we participated in the organisation of that festival, and I was partly responsible for the arena program, our flying there wasn't really an invite; I'd simply allocated some slots to us. 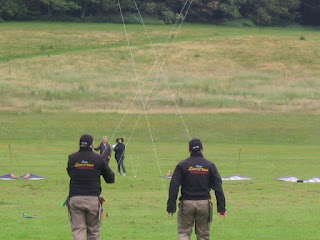 In the absence of Close Encounters, the only team performing on the Saturday was Team Spectrum, and you can always rely on them to deliver a solid, flowing performance, both with Bryan and Carl flying as a pair, and with Carl flying two or three kites on his own. 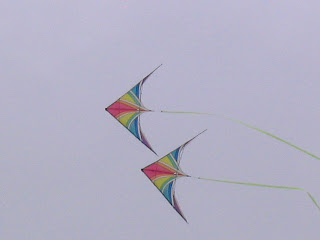 Back on Sunday, and we were on the program! 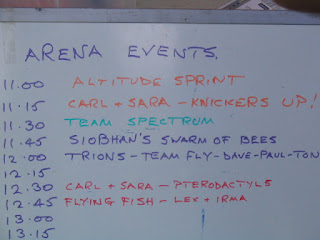 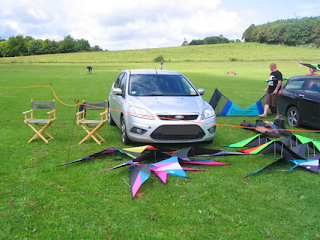 The wind was infuriating, changing speed and direction all the time, so we had to have a range of kites, for different wind conditions, ready. Our first routine of the day started fine, until all of a sudden a big hole in the wind appeared. I was on the edge of the hole and just managed to pull out, but Irma hit it full on and her kite just flipped over and fell to the ground. Thanks to Bryan, who quickly put the kite back in launch position, Irma could take off again almost immediately and we could finish our routine (thanks again, Bryan!). On our way to lunch (selection of bhajias with tamarind chutney; yummy!) we were asked by Simon Dann, who did his usual excellent job at the PA, if we wouldn't mind flying again later on .... Simon, are you serious? Does a Rev have four lines?? 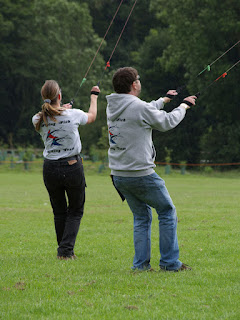 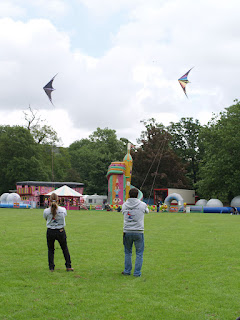 Just as we were about to start our second run, the wind dropped and I decided to switch to SUL kites. Call turned out to be a good one, as even the SULs struggled at times. But we got through our routine without any mishaps, even though I slightly misjudged the timing at the end due to the kites flying so slowly. Neither of our two performances was perfect (although apart from Irma's kite falling out of the sky, the public wouldn't have noticed the errors; of course, you're always your own worst critic), but we were still quite happy and most definitely flying at another festival was good experience. 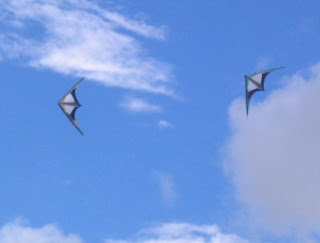 Given that this blog is focussed on pair- and team-flying, and for the sake of completeness, I should also mention two members of the Brighton Kite Flyers who were christened 'Weekend Pilots'. They didn't fly a specific routine to music, but did some impromptu pair-flying with their HQ Trion kites on Sunday.


Of course, it wasn't all pair/team-flying! Several other people of 'kiting repute' performing this weekend were Chris Goff and Piero Serra (trick kiting), James Robertshaw (Revolution flying), Karl & Sara Longbottom (Pterodactyls, pants and knickers) and Paul Thody (flying his stack of 24 (!) Flexifoil Stackers). Some photos showing them and/or their kites, and giving a more general impression of the Festival over the weekend are here. 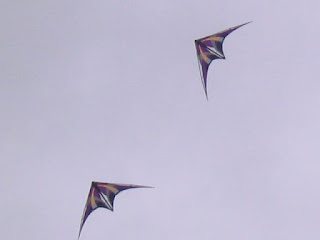 To end this post, I want to highlight what was the performance of the weekend for me: Carl Wright of Team Spectrum flying his two eggplant Prism Zephyr kites. I've seen him perform quite a few times over the last few years, flying two or three kites on his own, and often using his trademark "Barcelona" or "Goldfinger" music. This time, he flew a routine I hadn't seen before, to Escala's version of "Chi Mai". Partly it was due to the achingly sorrowful beauty of the music, but Carl managed to fly the kites so much in tune to the music that the whole was far more than the sum of its parts. From the corners and circles matching the first notes, right down to the kites' speed slowly dying as the music died, it really touched me. I don't think a video of this routine exists anywhere, so until you come to a kite festival and see it for yourself, you'll have to do with a photo of the two Zephyrs, and a link to the music, and add your imagination.

Photos of us flying taken by Carl Wright.
Posted by flyingfish at 21:58