Back in March, I wrote a wee teaser post about new kite sticks. Well, if you looked at the pictures of last weekend's Basingstoke Kite Festival, you may have noticed we finally got them! The reason why it took so long are for another time, and include the Belgian postal system not exactly being covered in glory ....

But good things come to those who wait, don't they? So here is our new set of kite sticks! 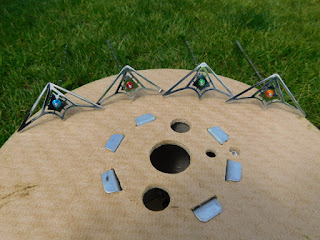 They're made by Team Flying Dragon, of metal, polished to a high sheen. When I saw them, I knew I just had to have these pieces of kite jewellery ... And why four, given we're a pair? Well, they came with the central nut in four colours, which just happen to match the pair colours in our clothing (blue - red) and T5 kites (green - orange). And we can now also take one or two extra people 'sticking' if necessary. 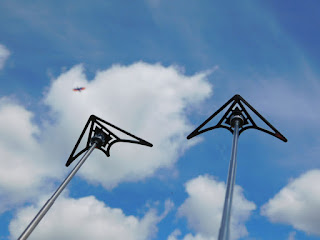 Of course, these new sticks aren't going to make us fly better all of a sudden. But sometimes it's nice just to treat yourself ...

And when not in use, they live snugly in a wee pouch. 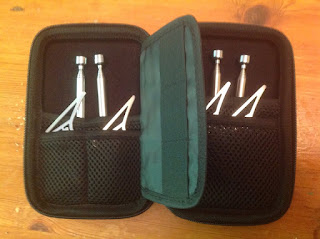 Posted by flyingfish at 18:19 No comments:

I've lost count of how many times we've flown at Basingstoke Kite Festival. Being only a 35 minute drive away from home, it's the nearest kite festival for us.

Weather was sunny all weekend, especially on Sunday. Wind was light and erratic on Saturday, and almost absent on Sunday; more on that later ...

In terms of pairs and teams, Basingstoke 2018 saw essentially the same line-up as last year: 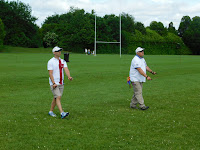 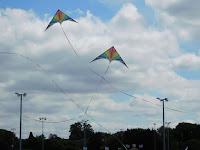 Amalgamation (as a 3-man team now, rather than a pair last year): 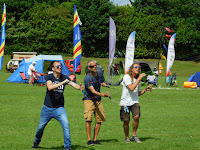 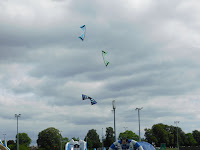 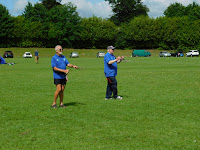 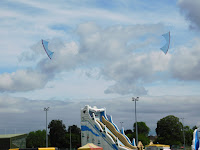 And then of course, Flying Fish! Like the other pairs and teams, we struggled with the erratic low wind (but it's Basingstoke, so we didn't expect otherwise). On Sunday, when there was virtually no wind, we tried out flying our Inner Spaces (flown to The Cocteau Twins' "Ivo") and our Kaijus (flown to traditional Japanese music). For both, that was their official festival debut and it worked out pretty well for both pairs of kites. Means we now have some alternatives to our T5 Cubans (which we flew on Saturday, as well as in an extra third slot on Sunday) to fly at festivals when the wind is really low. 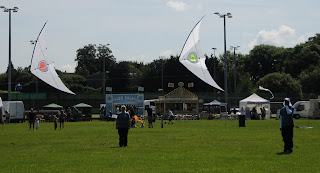 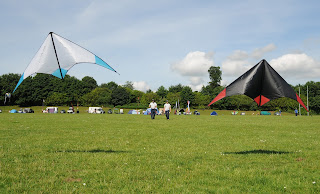 And just to illustrate how erratic the wind was: during our first slot on Sunday, we ran out of arena in both routines, but this happened at opposite ends of the arena. Yes, the wind had turned 180 degrees in a space of a few minutes ...

Few more photos of the festival can be found here. Do you like our new fishy 'wind swimmers', by the way? Saw them at the Go Kites stand and they just cried out that they wanted to be part of our festival base camp ... 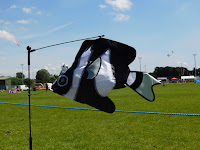 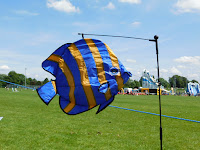 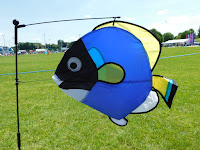 Picture credit of us flying: Carl Wright
Posted by flyingfish at 21:22 No comments: