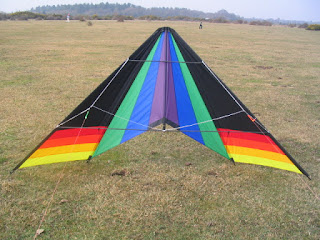 Pretty soon afterwards, we did get our hands on an original Top of the Line Hawaiian ... 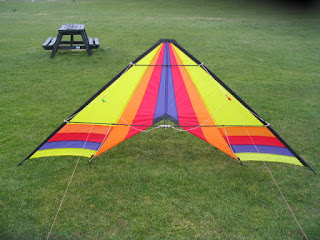 ... so we had a pair of Hawaiians to fly! There is a clear weight difference between them (460gr for the Chicago Kite Hawaiian; 582gr for the original Top of the Line kite), caused by the yellow original Hawaiian having thicker heavier spars, but with some bridle tweaking we managed to get them to fly (almost) the same. 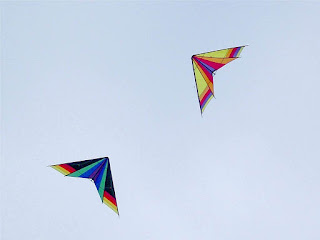 It then was a bit quiet at the Hawaiian front, until I was basically given another original Top of the Line Hawaiian ... 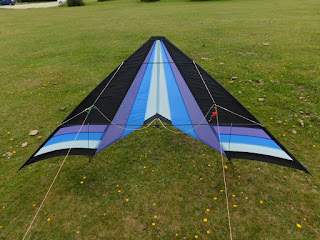 ... which, of course could be flown with another of our two Hawaiians. This one had lighter spars than our earlier yellow Hawaiian, giving it a weight of 429gr, and it flew best together with the modern black rainbow kite. 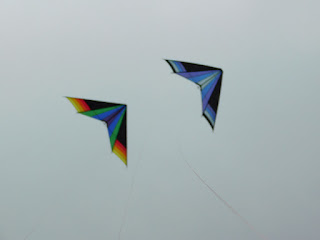 And then all Hawaiian hell broke loose ... first of all, we were given a pair of Top of the Line Hawaiians on indefinite loan. 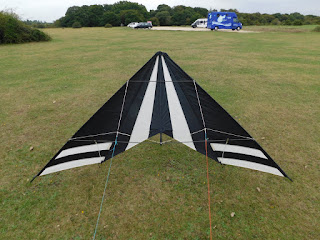 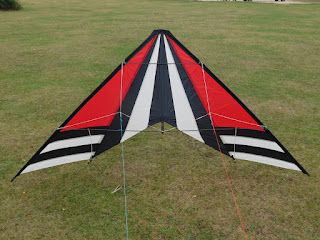 Striking sail colours, and they look fantastic in the sky together. 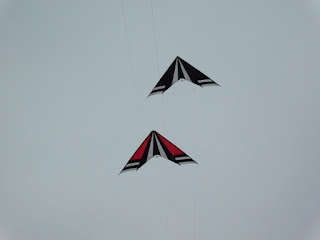 Very shortly after that pair, I was asked if I was interested in buying a set of three 'old skool' kites, one of which was a Hawaiian. Is the sky blue? Does a Rev have four lines?? This particular Hawaiian had a simpler sail design than all the others we had, with just green and blue panels: 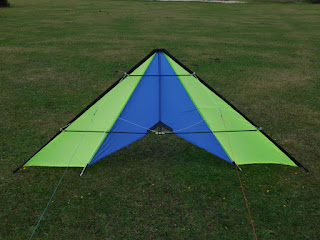 Interestingly, those same green and blue panels were also present in a Hawaiian owned by a team member ... 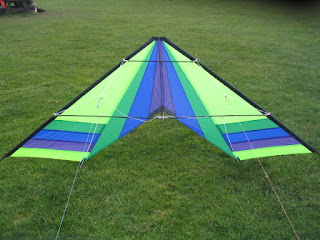 ... which made me think that the two together would be perfect for a 2-stack. To make a not very long story even shorter: said team member hadn't flown his green Hawaiian for ages, and was quite happy selling it to me. So we had a Hawaiian 2-stack! 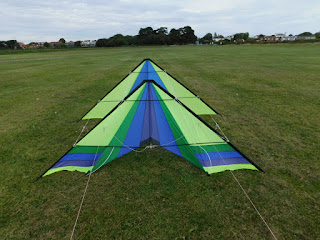 The two green Hawaiians look and fly well together, and the pull is a bit less than I expected (which may actually say something about my expectations rather than the actual pull) 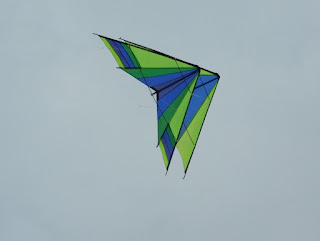 And, of course, following on from our earlier experiment flying a single kite together with a 2-stack, we also have that opportunity now with Hawaiians!

As far as Hawaiians go, this wasn't the end of it. I was again offered a Hawaiian to buy, and it would have been rude to have refused, wouldn't it? So here's our latest Hawaiian, which is another 'heavy' one with thicker spars, virtually identical in weight (578gr) to our yellow Hawaiian, and also more or less the opposite to that one in terms of colours: 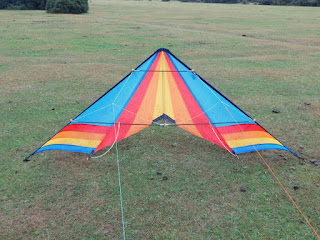 And you have to admit that the two look pretty good together, don't they? 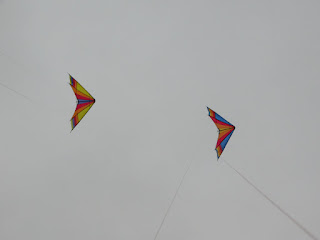 Going back to the early days of Hawaiians and team-flying, here's the classic "Battle Hymn of the Republic" routine of the Top of the Line team; enjoy, whether you've seen it before or not!