Just a news flash: Flying Fish has been invited to fly at Malmesbury Kite Festival! Malmesbury KF takes place July 20-21. We've not been to this particular kite festival before, and look forward to experiencing a different festival, and meeting new people. No idea at the moment who else will be flying there, but I'm sure we'll find out!
Posted by flyingfish at 08:03 No comments:

Those of you who have been following my blog will know I've been looking to double up some of our trick kites to allow us to fly a pair routine in due course which also includes a few basic tricks. First, we got ourselves a pair of Fury 0.85s to fly when the wind really picks up. Then, we got a pair of Cosmic ULs for light winds. That still left a gap for 'standard' wind. Clear candidate for filling that gap was a Blue Moon Kites Mamba. A joy to fly, combining precision with easy trickability (though not a trick monster, but that wasn't what we were looking for) and built with craftsmanship second to none. We already had one Mamba, so just get another one, right?

Well, there was a slight problem in that Blue Moon Kites stopped making kites just as I was starting to look for a second Mamba. And with it being such a superb kite, they aren't very common in the second hand market ..... On top of that, because we always want our paired kites to be different in colour, but at the same time matching or complementing each other in some way, I wanted one in a colour scheme that would fit with our 'black & rainbow' Mamba.

Finally found one for a reasonable price, via someone at the Drachenforum. So here are our 'Black Mamba' and 'Grey Mamba' on their first flight together! 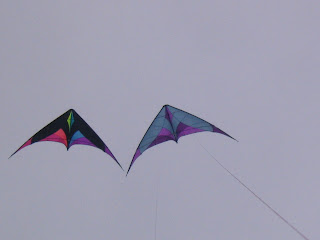 We've now got a large wind range basically covered, except .... no wind. Still contemplating whether or not to double up our Inner Space .... if we do, you'll read about it here!
Posted by flyingfish at 14:47 No comments:

Another practice weekend lost to bad weather, so maybe not strange my thoughts are drifting back indoors again. And with that warming picture in mind, let me introduce you to FlyForm, a US indoor and urban kite team. FlyForm consist of John Barresi (of KiteLife fame), TK Barresi and Spencer Watson. All three are also part of iQuad (arguably the top US Rev-team).

I've picked three videos for you to enjoy (I hope). First up are John and Spencer flying together as 2/3 FlyForm:


Then we have a video of the full team:


Did I say urban kiting? Here are John and TK:


More videos of them can be found on youtube and the FlyForm web-site; have fun!
Posted by flyingfish at 11:01 No comments:

The winter has been pretty bad for flying, and we lost a lot of days due to bad weather. But it will get better (won't it?), so let's quickly look ahead at the 2013 festival season. Where are we going and, maybe even more importantly: where are we flying? All weather-permitting, of course! 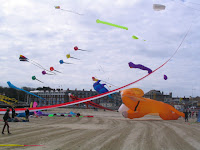 Weymouth
Weymouth Kite Festival, held May 4-6 (with the Saturday not having a specific programme) will be our festival season opener. We won't be flying there, but will be enjoying seeing some of the top UK teams and pairs perform, and generally catching up with people. 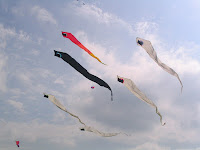 Basingstoke
Basingstoke Kite Festival takes place on June 1-2. Since we took up flying kites, we have been to Basingstoke every year, and this year we will even fly there, both as Flying Fish and as part of L-katz! 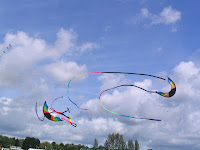 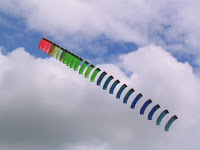 Brighton
Brighton Kite Festival is scheduled for July 13-14. We flew there last year, and we'll fly there again this year, this time both as Flying Fish and with L-katz. 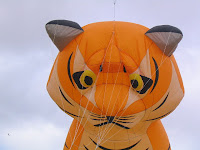 Portsmouth
As every year, Portsmouth Kite Festival, held August 24-26 (the Monday is free-flying), will be the last of the big festivals for us. We're not expecting to fly there (we're not that good yet!), but you never know of course. Whether we actually fly there or not, we will really enjoy ourselves!

In addition to these five, there are a few smaller events that we may attend, and possibly fly in, but details are still not clear, so it's a bit too early to list them here. Simply follow this blog, and you'll find out!

Hope to see you at one or more of the festivals in 2013. Just come say hi!
Posted by flyingfish at 10:29 No comments:

A kite's view of pair flying

Mini camcorders pop up on eBay and Amazon all the time, often for very low prices. I've always been tempted to get one, and attach it to a kite to see what the kite's view of the world is. What has made me hesitate was the negative reviews these mini camcorders often get, and it seems to be a bit of a gamble as to whether they actually work or not. Now if someone else gets one, there isn't much of a gamble involved of course! Neil did indeed get one, but wasn't sure how to get it to work, as it came without card and without manual .... Roger organised an appropriate memory card, and we then took it to the field for a 'test flight'. I also brought a netbook computer to the field, so we could check immediately whether it actually recorded or not (the buttons are very small, and it isn't always clear when a button is actually pressed).

First test was simply attaching it to the upper spreader of one of our North Shores, so the camcorder was pointing down, towards the flyer. This basically shows you what the belly of the kite sees when it's flying:

Next, we rotated the camcorder such that it pointed forward and recorded what the nose of the kite was seeing. In that position, Irma and I flew part of our pair routine, with the camcorder attached to the second kite:


Only a few times do you see the lead kite, and we're not quite sure yet why the camcorder picked up the lead kite so rarely. We tried several relative positions on the ground (from Irma standing behind me to Irma standing in front of me), but we couldn't get the lead kite in view consistently. Something to work on! And of course, the next thing to do is attach the camcorder to a kite when flying a team routine. As soon as we have the opportunity, we will try that!

Oh, and please ignore the date and time stamp; I couldn't change that or make it disappear ...
Posted by flyingfish at 15:02 No comments:

A few months ago, I wrote about our first venture into indoor flying. Following that, our return trip to Swindon was cancelled due to snow and ice, and rescheduled for yesterday. As before, everything organised by Karl & Sara Longbottom (thanks, guys!). 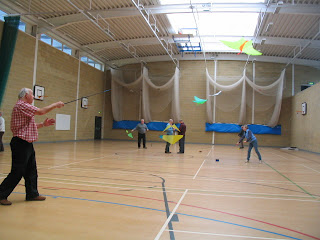 We had two specific things we wanted to do. First of all, get our grubby hands on a Flying Wings Laima (Karl sells them for a very decent price!). 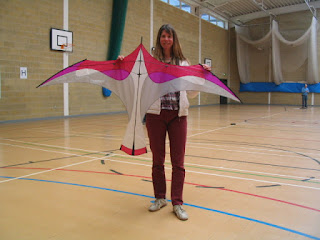 Beautiful and graceful glider, which does need quite a bit of space to really perform to its potential indoors (we were lucky, I guess, that there were fewer people than last time). 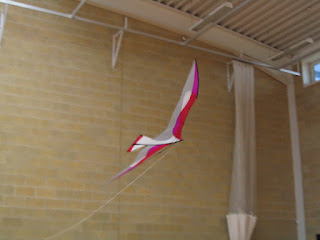 And the second thing we specifically wanted to do is try out a set of kiddies' fishing rods that Roger had bought, to be used as wands for flying our Pterodactyls. Roger is demonstrating the idea here: 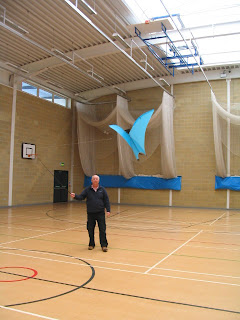 And this worked a treat!! It does take a bit of getting used to, but then you can really make the kites do what you want by controlling the amount of pressure you put on the sail. From fast straight passes to tight circles; as if the Pterodactyls were made for wand-flying! Karl seemed impressed as well, as he bought one of Roger's spare fishing rods. Given that Irma and I have a pair of Pterodactyls, we want to try out wand-flying them in no to low wind outside as well, and maybe add another string to our pair-flying bow?