Brighton Kite Festival occupies a special place in our kiting hearts. It was the first festival that invited us to fly in the arena 3 years ago, and so it's the festival we've flown most often at. On top of that, it just has a very pleasant atmosphere. Our fourth attendance as invited flyers offered us two very different days. On Saturday, it was wonderfully sunny, with winds gradually increasing during the day. 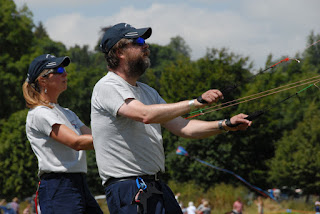 On Sunday, it hardly ever stopped raining or drizzling, and the wind was extremely variable and all over the place. I guess the pictures really show the difference! 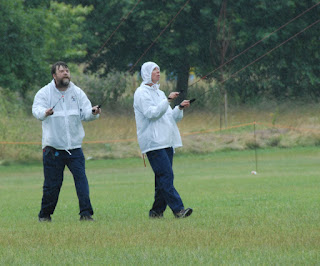 Also invited, as usual at Brighton, were Team Spectrum. And rather than show a few pictures of them flying, I thought I'd do one better, and embed two videos of Bryan and Carl flying as a pair; one from Saturday:


And one from Sunday:


I do admit to shirking my usual ground crew duty to make these two videos ...

Normally, Team Spectrum and us provide the dual-line precision-flying, but this year, Brighton saw a dual-line team in the arena in the shape of L-katz! Yes, L-katz is back flying at a festival, as a 3-man formation, with Neil in #3 position. I have to admit to being a bit sneaky in making this a reality: Neil had said he'd come and watch on the Saturday, so I phoned him up Friday evening asking him whether he'd be ok with flying an improvised 3-man routine in the arena, given he'd be there anyway; just bring your kites .... It was an offer "he couldn't refuse" ... 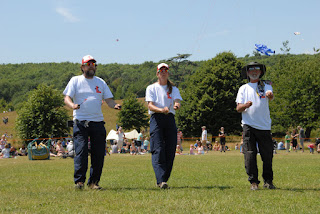 L-katz flew twice on Saturday. First run was rather shaky, especially because Neil had to fly several patterns in a mirror image compared to what he's used to when we fly with four (and he flies in #4 position). Second run went a lot better. 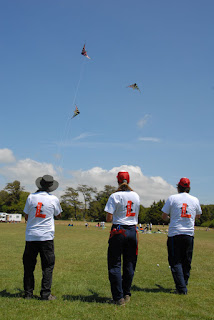 Hopefully, this is the start of the return of L-katz to festival-flying (and who knows what else ...).

Because of the bad weather on Sunday, the large inflatables (including the dragons), fighter kites, etc couldn't fly, so Team Spectrum and Flying Fish flew more slots than usual, just to make sure there was usually something happening in the arena.

Did I mention dragons? Smorg, Angalor, and BKF's as-yet-unnamed blue dragon all flew on Saturday: 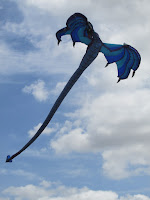 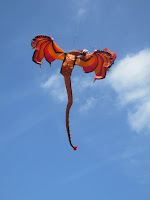 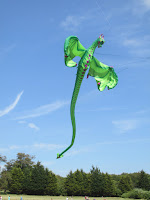 More pictures of the triumvirate of dragons, who didn't always get along nicely, and other kites, are here.

Picture credit of us flying as Flying Fish and in L-katz: Carl Wright (Team Spectrum). 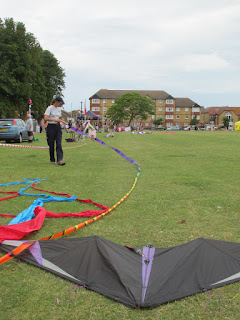 Herne Bay was the third new festival we flew at, and participated in this year, and it certainly was the festival furthest from home so far. Also, it was a unique festival for us. But more on that later.

It turned out to be a relaxed day of flying kites, with the public coming and going. The wind was a bit iffy, going up and down quite a bit through the day, but I think we adapted ok. We flew our now usual pair of routines twice, to Ruthless Queen with our Airdynamics T5 Taipan ULs, and to Adiemus with our Cheetahs first, and Fire Darts later, in both cases with 100' tails. Which reminded us of one of the drawbacks of flying with tails ...

The second of our Ruthless Queen routines was flown with our Dream Ons, and here's why ...

The organisers, Kent Kite Flyers, had asked us whether we would be willing to give some basic pair/team-flying tuition to a few club members. Answer was yes, of course, and that meant we had come full circle ... in August 2010, we received our first pair/team-flying tuition from Allan & Marilyn of Close Encounters, and less than five years on, we were at the teaching end. Only difference was that we got our first taste of pair/team-flying out of the public eye, while Barbara, Mike and Tim did so in the middle of an arena at a kite festival! Here are the three brave souls in action: 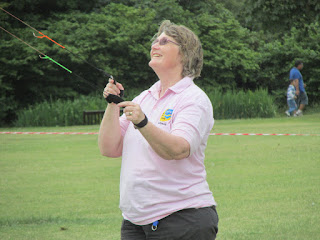 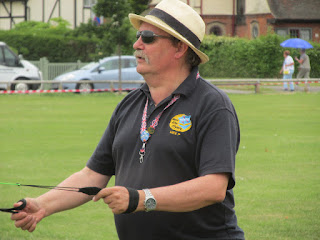 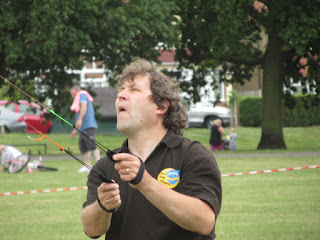 We decided to use our trio of Dream On kites, so as to make sure we had identical kites with identical long lines. I would first fly some basic pair-patterns with Irma, explaining what we're doing to the public via a roving microphone. Irma would then hand over her kite to one of the three, and I'd fly basic patterns with them. Then Irma would join in #3 position, giving each of the three a real taste of what it is to fly in the middle of a team.

I think they'd agree with me when I say they were struggling (the wind dropping at times didn't help), and there is of course a limit to what I can do in the roughly 15 minutes I had for each of the three in the arena schedule. It just goes to show that even if you know the basics of how to fly a dual-line kite (which all three did), flying it such that you do exactly what is needed when it's needed is something different. All three told me afterwards that they found the experience mentally exhausting but exciting at the same time (exactly how we felt when we started pair/team-flying), and I sincerely hope they'll take things further, as a pair or team. Offer made to any or all of them to come our way for a day of coaching stands!

Immediately following the tuition session, we flew our Ruthless Queen routine with the Dream Ons, just to show that it can be done with these kites in the prevailing low wind.

More photos of the day are here.
Posted by flyingfish at 21:17 No comments: