The Hurricane is a vented kite designed and built by Adam Pallas. I first flew an early version at the northern round of the Nationals in 2016, following a demo by the Pallas Family Flyers there. 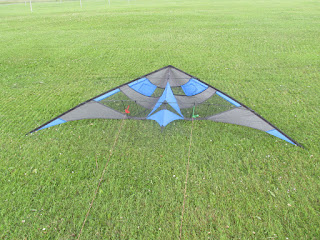 The kite is designed for strong and variable wind, and comes with a set of three patches, allowing the flyer to adapt it to the prevailing wind. I liked the kite I flew back then, although I felt the standard 6mm carbon frame was a bit too flexible. Adam said he was looking into using Skyshark spars.

Fast forward by three years and some, and we were looking for a second pair of vented kites at the extreme high end of the wind range, to be added to the Airdynamics Taipan V2 kites we already fly. I remembered the Hurricane and shot off a quick email to Adam. Yes, Hurricanes with Skyshark spars were indeed available!

Which of course brought us to the dreaded or cherished (depending on how you look at it) colouriser .... after playing around a bit, I decided I wanted a pair of kites that did not in any way conform to the colour schemes we normally use for Flying Fish. So no green/orange, no blue/red. Ultimately we decided on purple/grey, with the two kites only distinguished from each other by the shade of grey (light grey for Lex, dark grey for Irma).

So here they are! 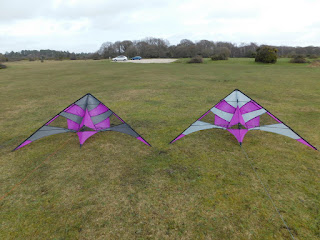 As I mentioned above, Hurricanes come with three sets of patches, giving six possible permutations: 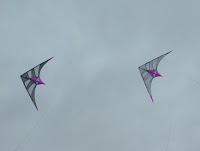 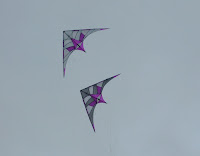 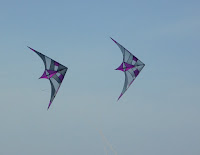 It will take some time to get a feel for what permutation is best for which wind conditions ...

Putting that aside for now, how do they fly generally?

We also flew our pair of Hurricanes together with a pair of V2 when flying with L-katz. 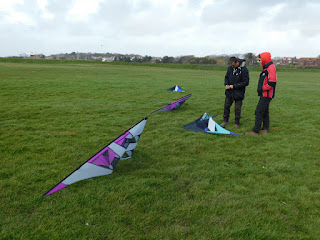 That showed, first of all, that Hurricanes and V2s are not a good match. As I already mentioned, the Hurricanes feel slower, and that's exactly what happened in a straight comparison. It was very difficult to remain in proper formations when flying Hurricane - V2 - Hurricane - V2. Of course, flying such different kites together in the team was never an aim, but it was an interesting comparison. What that session also showed, and what I was already expecting, is that the Hurricanes without any patches seemed to go a wee bit higher than the V2s. When the wind picked up and Pea and Lisa were finding flying their V2s becoming uncomfortable, Irma and I had no problem with the Hurricanes, and when we then handed the lines of our Hurricanes over to Pea and Lisa to have a go, they confirmed the Hurricanes felt better under the prevailing conditions.

In summary, we're very happy with this addition to our pair-flying quiver, and look forward getting more time with them. And I also feel our choice of purple and grey works really well. Kites look great in the sky, and also look great together! 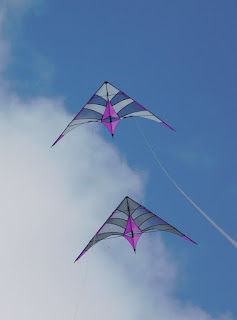 Posted by flyingfish at 15:52 No comments: