I check eBay frequently and regularly for kites, and quite a few kites in my quiver have arrived there via eBay. One kite which keeps popping up is a small dual-line kite, which appears to be official (?) merchandise for the McLaren Mercedes F1 team. It's also available via amazon, where it is described as a 'classic'. Classic in what sense? Not quite clear ... Price for the kite usually varies between £9.99 and £14.99, but when it was listed for £4.99 on eBay, a sudden morbid sense of curiosity made me click the 'Buy It Now!' button .... How bad would a £5 kite be? I just had to find out! 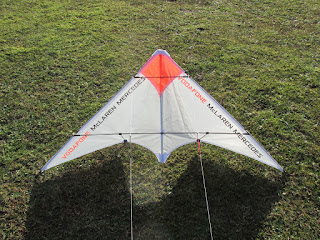 Wing span is 1.14m, and it has a fibreglass frame. Stitching quality is as you would expect: Tim Benson would probably rather start selling knitting sets than sell a kite with this level of workmanship ... So no surprises here: you get what you pay for.

So how does it fly? 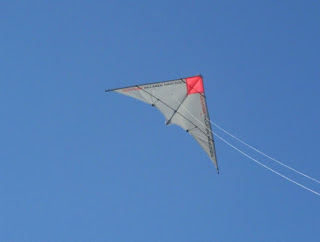 Well, much better than I expected! Which, of course, says heaps about my level of expectation ... It tends to oversteer, but once you get used to that, it doesn't fly too bad, is a little bit noisy (but nothing like a North Shore Radical), tracks reasonably well, and I even managed to squeeze an axel or two out of it (and keep in mind, I'm not a trick flyer by any stretch of the imagination). It does need a bit of wind pressure in the sail; although it flew fine from 5-6mph onwards, it tends to drop out of the sky when the wind goes below that. Launching in light wind can be a bit tricky, but there's always the 'throw it up in the air' method to fall back on! 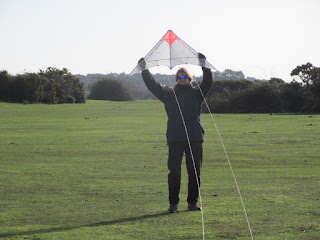 So is this wee kite value for money? Well, let's put it like this. Assume, for simplicity sake, that a top end kite will set you back £250. Is that top-end kite 50x as good as this McLaren kite? If you were offered the choice to either fly a top-end kite for one weekend per year (and no flying kites for the rest of the year), or fly this McLaren kite every weekend of the year, what would you choose? Fly once a year with a top-end kite, or fly every weekend with this £5 kite? You decide whether the kite is value for money ...

Taking my tongue out of my cheek again, is Flying Fish going to get a second one for pair-flying? Ermmm, no ...
Posted by flyingfish at 16:00 No comments: