Irma says it regularly, I'm a typical male: I keep lists. From the day we took up flying kites, I've kept a record of when we've flown, where we've flown, and what we've flown. Plus anything else we did that was kite-related, for instance attending kite festivals. And all that in the form of a diary, with plenty of photos, and brief comments. Here are two random pages from our 2012 diary: the first of almost three pages on the Weymouth Kite Festival, and an entry on a SKF fly-meet a few months later, where we first got to fly our initial batch of North Shores loaned to us by STACK. 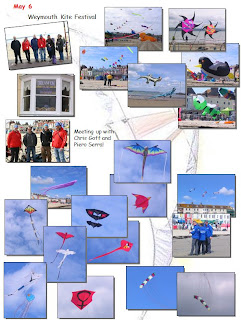 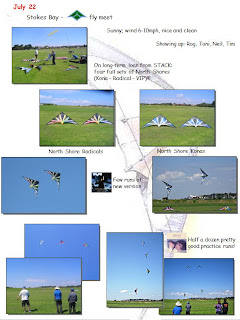 Besides the kite diaries, I also maintain a database of all the kites we've ever flown. For this, I use the same software I use for cataloguing my CD collection: Music Collector. With a few imaginative tweaks, it works pretty well for kites as well. Each kite we've ever flown, whether it's one of our own or one which belongs to someone else, has its own entry, and I always try to make sure I have a photo of it 'ready-to-launch' and one of it flying. Information in the entry includes when we first flew the kite, how often we've flown it, where we've flown it, plus information on size, wind range, price, lines used, bag it lives in, etc. Here's the entry for one of our Airdynamics Taipan SUL kites: 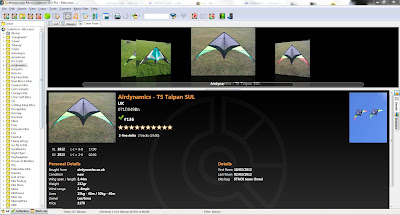 So yes, guilty as charged: typical male keeping lists. But Irma now (grudgingly) admits it is indeed fun, despite her initial scepticism!
Posted by flyingfish at 20:59 No comments:

What do you give a kite enthusiast as a birthday present? Well, sorry, but that's a pretty silly question ... And this year's present was basically sorted when I saw a very impressive kite-stack offered for sale, as good as new, on Drachenforum. To make a not-so-long story even shorter: thanks to Irma and her family!

So here's the stack in question, a WS Drachenbau Yin-Yang progressive stack: 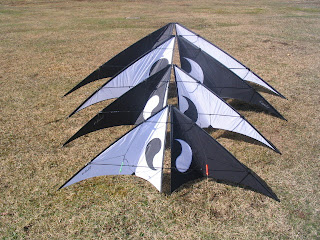 First flew this gorgeous stack at Stoney Cross, at winds between 2 and 8 mph. It needed 5-6mph at least to fly properly, but when it did, it did! 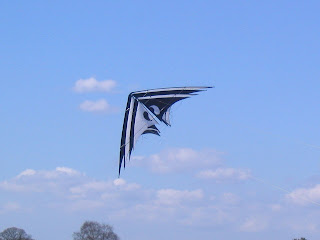 The black-and-white really gives it a graphically very strong appearance in the sky. 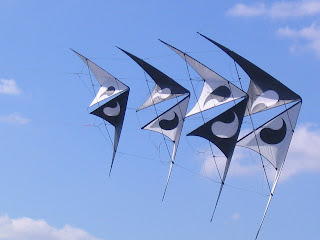 Flight was controlled and pretty slow, but I don't doubt speed (and pull) will increase when the wind goes above 10mph. 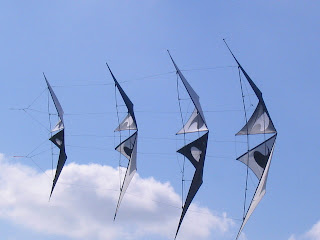 And finally, a wee bit of video, showing the stack in action:


Update: OK, one more picture then, from flying the stack at Stokes Bay today: 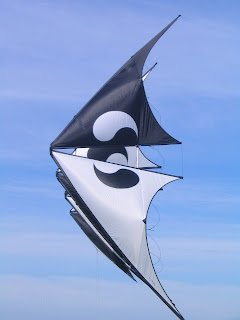 It isn't very often that kite-flying, in whatever shape or form, is the subject of a documentary. So when it does happen, all the more reason to be excited!

MTP Studios is working on a documentary on indoor flying, and they have just released a trailer:


It looks really good, and no surprise to see Spencer 'Watty' Watson, of FlyForm fame featuring. The project also has a Facebook page, which I'm sure will show the latest information. Release date is expected late 2013 / early 2014; I sincerely hope it will be possible for people outside the US to see this in due course!
Posted by flyingfish at 21:40 No comments:

The focus for Flying Fish and L-katz has always been on flying routines with dual-line kites, and this will definitely remain so in the foreseeable future. But it is nice to have something extra to add to our repertoire, and with that in mind, I've been eyeing our quiver of quad-line kites lately.

Two of these do lend themselves very well to doing something on a festival that will appeal to the public (I hope). The first one is a Skydancer Mijet, made by Con Engels of Windstar Kites in the US. Con took over production of Skydancer kites following the death of David Davies, and the Mijet, a 3/4-size Skydancer, is his own version of this unique kite. 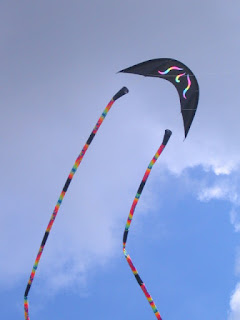 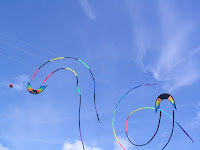 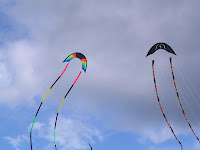 Surely, we can fly all three together to create a routine full of flowing tails?!

Our second 'fun quad' is a VampDevil quad kite, made by Flying Wings. When it was first released to the Asian market a few years ago, I knew I just had to have one! Wasn't easy, given that it's not for sale in the UK (at least not yet, as far as I'm aware), but thanks to Manfred Kluge of EMKAY kites, I managed to get my hands on one. And isn't it a sweety? 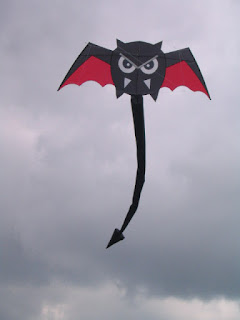 Definitely a crowd pleaser, I'd say!

In terms of music, plan for flying the Skydancer routine is to Within Temptation's "Somewhere", as that has just the right speed, and really matches the Skydancers' flowing flight.


For the VampDevil, I've picked "Thriller". Not the original version, but The Love Crave's cover version. Francesca Chiara's voice add just that bit more creepiness, which matches the kite perfectly!

I've complained about it before: this winter has been really awful when it comes to flying together with L-katz. Mostly because of the weather, we've hardly been able to practice our team routine since September last year. And we really need the practice, because of a few new elements we decided to introduce into the routine late last summer.

So it was really nice to be able to get a serious day of practicing under our belt at Stokes Bay last Sunday! 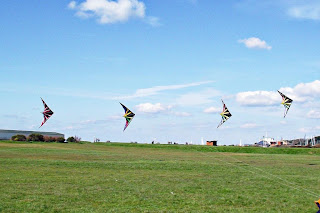 Objective number one was simply to get back into our routine, and make sure everyone knew what he or she was supposed to do in each of the patterns. As you can imagine that created a few "sorry, I thought I had to flank left there ..." 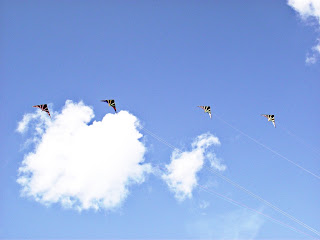 Second objective was to practice two new elements; one about a third into our routine, the other towards the end. We decided to focus purely on the first half (and a bit), refresh our memories and work on the first of the new elements. 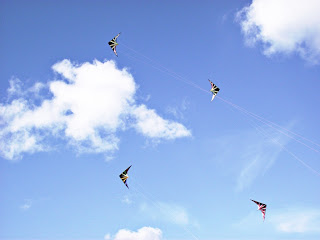 Finally, a video of what is roughly the first half of the L-katz (v2.0) routine. Yes, it's sloppy in places, yes, it's rusty, yes, we're making mistakes, but it was just good to be able to work on the routine again after something like a four or five months hiatus .... 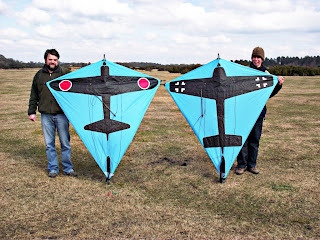 The wind was quite variable at Stoney Cross, anything between 0 and 12mph, so not ideal for flying these kites, as they do need a decent and steady pressure on the sail. But nevertheless, here's the first picture of the two flying together: 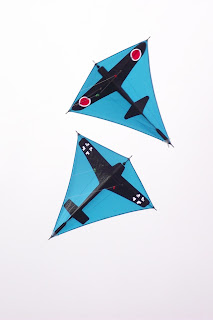 And on top of that, a bit of video as well:


We do want to create a routine especially for these kites one day, but our focus is first of all on polishing the pair and team routines for the upcoming kite festival season. So it's something for the future. My intention is to use the theme music of "Where Eagles Dare", as that includes the 'sound of cannons firing'.


I have also found some sound files of Zero and Focke-Wulf airplanes (the planes seen in silhouette on the kites) and I intend do merge them into the music using Audacity.

But first, allow me to feel chuffed to bits about completing a project which started as a very vague idea more than a year ago. It was really great seeing them finally fly together!

Picture and video credit: Roger Backhouse, who witnessed the inaugural launch
Posted by flyingfish at 11:31 2 comments: