Those of you who have been following this blog for some time may be aware that the origin of the name 'Flying Fish' lies in our very first team-kites: a pair of 'Fish' and 'Shark' kites, designed by Joel Scholz. These particular kites are made by Go Fly a Kite, and are a cheaper version of the original Joel Scholz kites, made by Sky Delight Kites. As that company no longer exists, original Joel Scholz dualies are rare as the proverbial hen's teeth ...

As we had a pair of 'Fish' and 'Shark' kites, I was looking for second 'Fish', to allow us to fly three kites with our team L-katz, with the 'Shark' chasing two 'Fish'. While doing so, I stumbled across a full set of original dual-line Sky Delight Kites, for sale for a very reasonable price. The rest, as they say, is history ...

The weekend weather this year so far has been either wet and stormy, or without any wind, but Good Friday finally offered the perfect opportunity to let all five take to the air and try them out. So here they are, in order of flight on the day! 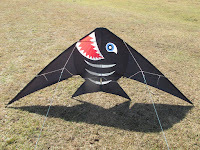 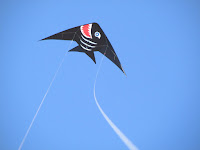 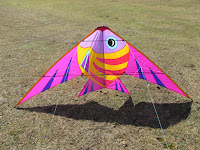 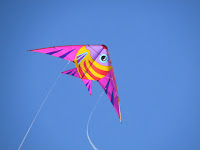 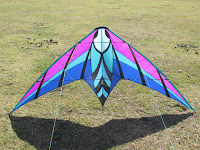 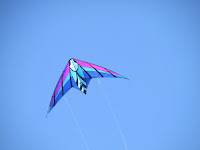 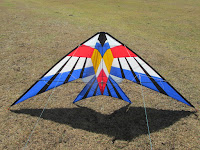 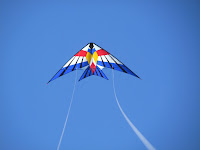 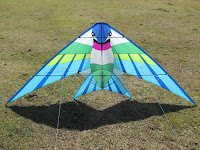 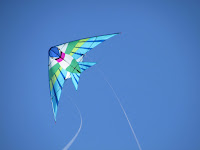 They fly well and should, I feel, be considered as light-standards. They do need some pressure on the sail. Not much, but as long as it's pretty constant, they're fine. So they can go quite low, down to maybe 3mph, but are decidedly unhappy when the winds goes above 15mph. Personally, I wouldn't want to fly them above 12-13mph.

So here's the full set at our normal flying field in the New Forest! Isn't that a sight for sore kite-flying eyes? 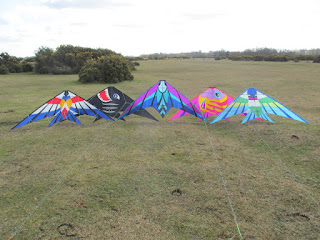 Obviously, the aim is to fly them together, so we spent some time tweaking bridle settings to make sure all kites flew the same. As Neptune felt best when we flew them one after the other, we decided to match all kites to Neptune. First up was Jaws, and it only required bringing the nose forward by a tiny amount to make it fly happily with Neptune. 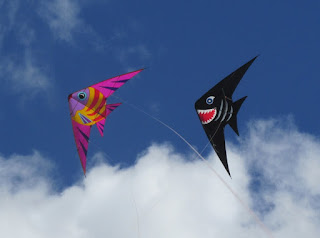 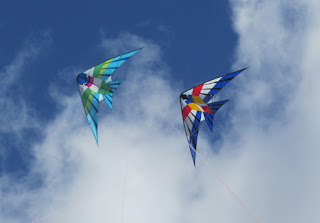 And what about Luna Moth? From the moment it took to the sky, it felt different from the others. Not surprising, as it's designed differently. Flight was very slick and smooth, and, as it lacks the tail, also completely silent. But despite the difference in flight 'feel', it matched the others very well in terms of speed, so no problem flying Luna Moth with one or more of the others. We do intend to fly all five with L-katz in due course, and I'm not sure that has ever been done with a set of these kites.

What we didn't get around to, because the wind had dropped down to nothing by the time we had matched these five to each other, was to match our original 'Fish' and 'Shark' to these five. Will do so at the next opportunity!

Jacqui, thanks for the opportunity to get my hands on this full set of Joel Scholz dualies, and it's only appropriate historically that they remain together as a set. 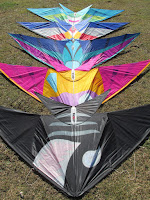 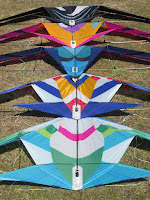