A pair of special Phantoms

If you're asked, as Flying Fish, to become custodians of a unique pair of kites, which have relevance to the history of team-flying in the UK, you're not going to say 'no, thanks', are you?

Cast your mind back to 1989. A UK kite team, called 'The Decorators', becomes interested to move from flying roks to getting into dual-line team-flying. They contact Tim Benson with a request to make them a set of dual-line kites. Tim builds a set of four Phantoms, in a custom colour scheme, which is different from the graphics that Phantoms became best known for. 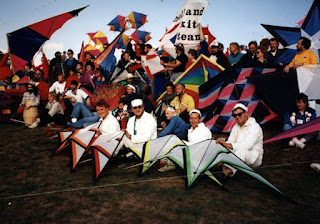 This set of Phantoms brought 'The Decorators' international success. 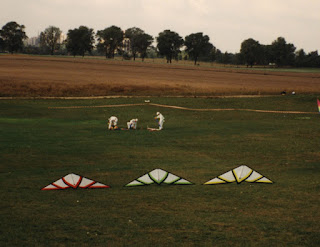 With the introduction of the Revolution, 'The Decorators' switched to quad-line kites, and this is still what they're rightly famous for.

So what happened to their set of Phantoms? Bill Lancashire, very interested in and knowledgeable about the history of Phantom kites, got hold of two of the four 'Decorator Phantoms': the yellow and green ones; the whereabouts of the other two (red and orange) remains unknown. The kites were in pretty bad shape, but he restored them to the best of his ability, and with original spars and parts as far as possible. 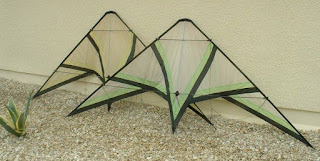 And this is where Flying Fish comes in: Bill contacted me, asking if I was interested in taking custody of this unique pair of kites, and for Flying Fish to fly them in public on selected occasions. Why Flying Fish? Mostly because of our enthusiasm in flying at UK festivals, and our interest in the history of dual-line kites. Bill, did you honestly expect me to turn this down???

So, shortly after xmas, the postman delivered a long parcel, and here are the 'Dec Phantoms' on the ground of our regular flying field in the New Forest! 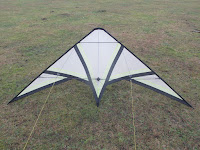 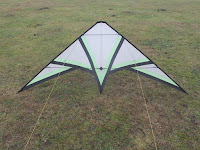 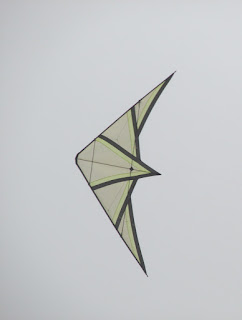 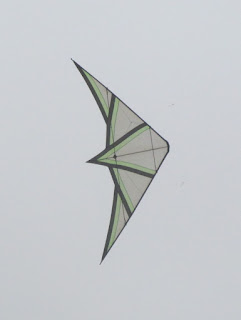 ... and, as they're obviously meant to flown together, with both of them in the same shot! 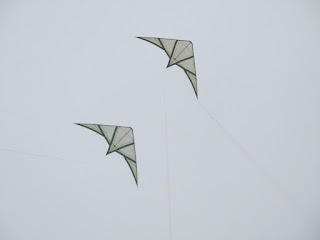 When we flew them, the wind was mostly 1-4mph, so very light winds. They were struggling at 1-2mph, but started to fly solidy, though slowly, at winds of 3mph and above. They really are a dream to fly, tracking excellently. We went through most of the STACK pairs figures with them, and they had no problem flying these. Given the spars they're framed in (Beman light), and the fact that they're old sails, they need to be handled carefully and I wouldn't like to fly them in winds above 8-9mph; most definitely not with winds in double figures.

Bill, we feel honoured to be given custody of these unique kites, so thank you for trusting us with them. We'll bring them to selected festivals, and, who knows, one day we may fly them as part of a mixed dual/quad-line 'Decorator and guests' line-up!