The Ariel Sky Rider was one of the diamond stunt kites that came on the market in the late 1970s in the wake of the success of Peter Powell kites. I've only ever seen two Sky Riders 'in the flesh': One was part of a job lot of 1970s dual-liners (which mostly contained Peter Powells) that I bought from Allan Pothercary. The other one was a gift from ........ the very same Allan Pothecary.

So here are our two Ariel Sky Riders! 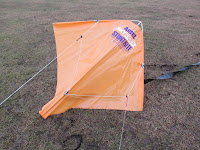 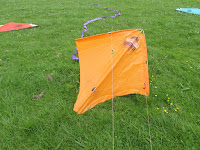 Note that Sky Riders do not have cross spars. The (aluminium) frame consists of a spine and two leading edges. The first one came with an original black tail, while the second one came without tail. I added a purple Trlby tail, to match the lettering on the sail. So how do the Sky Riders fly? 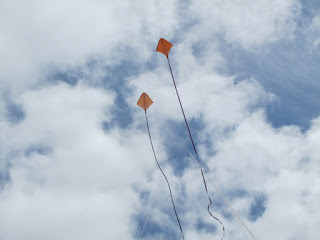 Well, even though Sky Riders proudly proclaim on the sail to be 'the first 100mph kite' (not clear whether that refers to the wind speed or their own potential speed), their flight characteristics are less than impressive. They're very twitchy, and not very good at consistently catching the wind. In other words, they stall unpredictably, and then require extra efforts just to keep them flying. This may well be due to the high level of flexibility of the frame, and lack of cross spars. Their flight behaviour makes it quite a challenge to fly two of them together.

In summary, it's fun to have them as part of a collection of early dual-liners, but they're not even in the same league as a contemporary Peter Powell. So don't expect Flying Fish to fly them for anything serious.
Posted by flyingfish at 17:00 No comments:

We've come to Basingstoke Kite Festival every year since we took up flying kites in 2009, so this was our eighth time attending, and our fourth year as invited flyers.

Saturday was overcast all day, with very light winds (mostly 2-7mph), whereas Sunday gave us a gorgeous sunny day, with a bit more wind (mostly 3-9mph); the rain and thunderstorms forecast for Sunday never materialised! On both days, the wind had the tendency to drop away to almost nothing at times, and there were holes in the wind throughout the weekend.

Flying Fish flew five slots in total (three on Saturday, two on Sunday). Our weapon of choice was mostly our ultralight Airdynamics T5 Taipan, though we had to switch down to our Cubans once. On Saturday, we struggled a lot with the finicky wind, several times almost running out of arena. but on Sunday we flew a few cleaner routines. 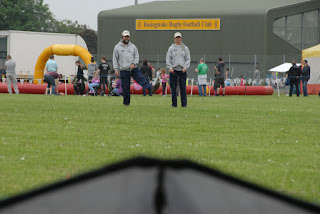 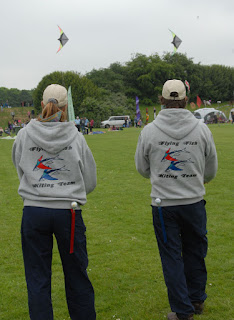 Who else was there in terms of pair/team-flyers? First of all, our regular neighbours at kite festivals throughout the season, Team Spectrum. Carl and Bryan flew their usual set of routines: Carl flying two kites -> Carl and Bryan flying as a pair -> Carl flying three kites. They weren't very lucky with the wind this weekend, as they had to stop and restart their routine a few times due to running out of arena. 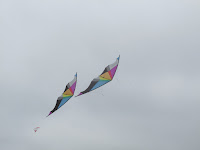 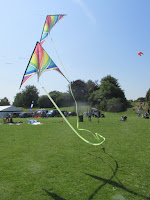 In terms of dual-line teams, Sky Symphony attended with a 3-man team on Saturday: 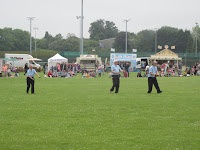 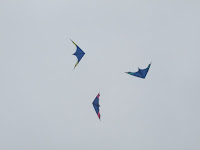 And Flame flew on Sunday, also including a pairs routine as Phoenix in their slots: 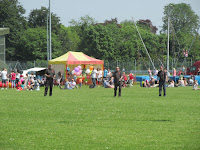 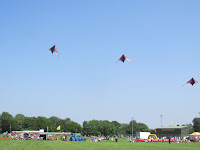 And the third team flying at Basingstoke was L-katz! Back to fully flying at a festival this year (after last year's single-day appearance at Brighton). On Saturday, we made some errors, and Neil dropped out of the sky once due to the wind dropping away completely. Sunday was a lot better: we flew a pretty smooth routine in the first of our two slots (with a perfect cascade!), and were very lucky in the second ... Just prior to L-katz flying, we'd flown as Flying Fish and had to switch down to Cubans because of the wind dropping. Now for the L-katz routine, we had to switch back up again to ultralights, simply because Neil doesn't have a Cuban. I called the shots to try and fly, as I didn't want to give up without trying. As we launched, and the kites struggled to rise, I thought I'd made the wrong call .... but then the wind did pick up a bit, just enough for us to fly a clean routine, and just as we landed, the wind switched off. Talk about a lucky 4 minutes! 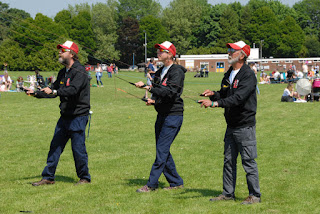 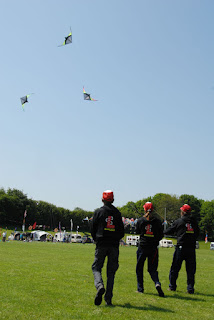 Of course, with several dual-line teams present, a mega-team is part of the programme. On Saturday, the mega-team consisted of two members of Sky Symphony, Carl from Team Spectrum, Flying Fish, Fran from Flame, and Chris Goff flying the latest Benson kite on 25m lines .... all went well! Sunday had a brief mini-mega-team, consisting of Flame + Flying Fish.

For the first time since we've been attending Basingstoke, there was no quad-line team; hope The Flying Squad will be back flying again next year. Although not flying, some TFS members were present: Simon doing the commentary and Hezz womanning the music system.

Of course there were lots more flyers and lots more kites; pics are here. I do want to single out one kite: the absolutely gorgeous Phoenix, made by Karl Longbottom. Glad I got to fly one! 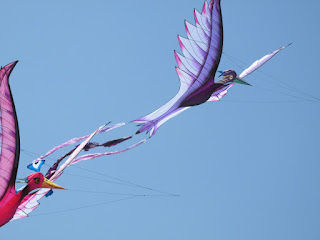 Pictures of Flying Fish and L-katz: credit Carl Wright.
Posted by flyingfish at 21:57 No comments: