With Exmouth kite festival now behind us, we've yet again reached the end of a festival season. It seems only weeks ago that we had the opening of our festival season at Weymouth. Since then we've flown at Streatham, Basingstoke, Brighton (Irma only), Leominster & Hereford, Dunstable and Portsmouth. Plus competed at the Nationals, of course.

Exmouth is often said to have a bit of a microclimate of its own, and conditions were definitely challenging at times. Saturday was cloudy, with the wind variable, both in terms of speed (0-11mph) and direction. Sunday again saw varying winds (0-16mph), some sun, but also intermittent showers throughout the afternoon. Especially the variable wind speed meant it was very difficult to plan ahead which kites/routine to fly .... 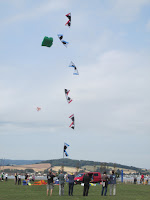 Focusing on team-flying, as I normally do in this blog, we first come to the Decorators, who were present with a 6-(wo)man team. At the start of their first slot, the wind died down completely, which led several of them to fly multiple 360s, just to have something happening in the arena to entertain the public. When there was wind, they flew their usual professional routines. 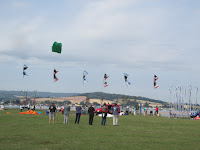 The Airheads flew several 3-(wo)man routines, with and without tails. They also struggled with the wind dying down to nothing at times, especially when they were flying with tails. 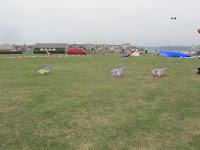 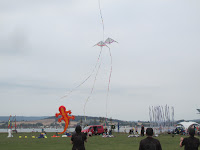 And the third and final team flying at Exmouth was Flying Fish. Interestingly, all three teams had one woman in the ranks .... For two of our four slots, we just hit those 5-10 minutes when the wind died down to virtually nothing, but we did what we could, flying our 'Chariots of Fire' and 'Adiemus' routines. They weren't the best performances we ever gave, but given the conditions, they weren't too bad. 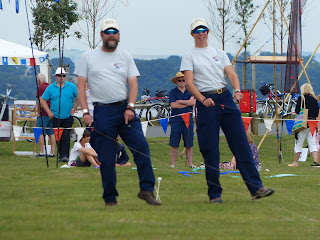 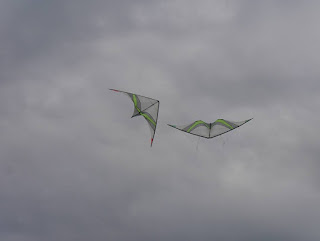 Just before our Sunday morning slot, the wind picked up quite a bit, enough to risk flying our Peter Powells to new music. We almost got away with it, but had to abandon maybe half a minute or so before the end, when the wind dropped down so much that the kites fell out of the sky. Still, a routine debut! More information on this is found in our sister blog. 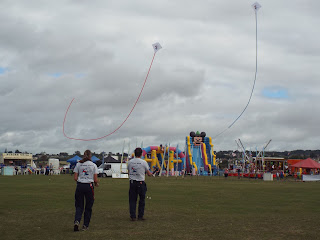 With Airheads and us invited, a combined team slot was on the programme. Rather than the 'fish sandwich' formation we used several times this year, where Flying Fish is sandwiched between two Airheads on either side, we flew in a slightly different formation, with the three Airheads and the two Flying Fish alternating; this new formation was quickly dubbed 'fishfinger sandwich' ... 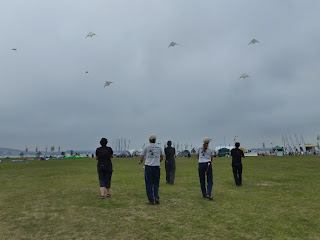 Of course, lots of other flyers performed in the arena over the weekend (Paul Thody, David Ellison, Gill Bloom, Nick James, Trevor Reeves, Cao Quan, Martin Lester, Alfie Jobbins, Tim Rohn, to name just a few). And one of them might just lead to a very special pair of kites for Flying Fish .... watch this space over the next few months. What I felt was also a very good idea was to have slots for the public to come into the arena, and fly 'professional' kites (Nick James' Angels), helped by the invited flyers. After all, if we as flyers don't inspire the next generation to take up the hobby/sport, kite flying will be extinct within a generation. Lots more pictures of these flyers and their kites, plus a few of rain recess entertainment in the form of Vee catching bubbles, are here.