Anyone who has flown a Flexifoil Psycho will agree that the name of the kite is well-chosen. When the wind picks up, this kite becomes a fast and furious one, and flying (half-)axels with this kite in a strong wind is, well, let's say 'exhilarating'.

Of course we have a Psycho in our quiver. You can't call yourself a serious sport kite flyer if you haven't at least flown one at least once. 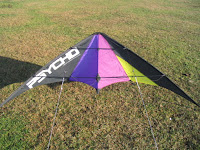 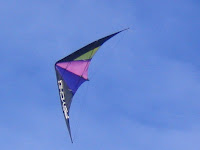 Now it just so happens that a kite-flying friend of us has several Psychos. That opened the opportunity of adding a second Psycho to our quiver, and do some pair-flying with them. Crazy idea? Sure, but if you've been following Flying Fish over the years, you know that we're keen to pair-fly kites that aren't your normal team kites ...

Said friend was willing to let one of his Psychos go when I explained what we wanted, and here's his Psycho joining ours at our regular flying field in the New Forest. 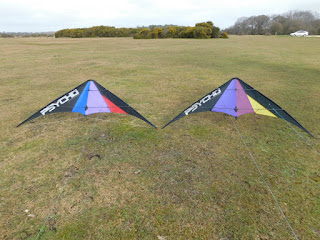 By design, Psychos oversteer massively; they are are everything a team kite shouldn't be. But that does make it a lot of fun to try and do something with them that sort of resembles synchronised sport kite flying. 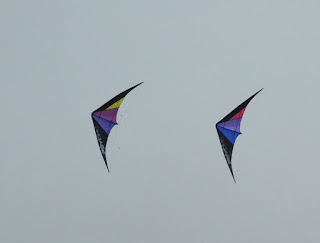 We tried simple things such as boxes (very wobbly boxes!) and ladders, and then moved on to parallel half-axels and contra-axels. Surprisingly, they refuel quite easily! But when it comes to flying STACK figures with them .... well, let's just say any judges present wouldn't really have needed their pencils ...

Nevertheless, flying them together really is a hoot, especially when the wind picks up. Psychotic kites indeed!

Posted by flyingfish at 13:27 No comments: