Portsmouth Kite Festival always arrives with a bitter-sweet feeling. Sweet, because it's the biggest and most varied of the kite festivals we normally go to. And bitter, because it's also usually the last of the season for us ... In this post, I will focus on the dual-line pair/team-flying, but lots of photos, giving a more general impression of the weekend, can be found here. 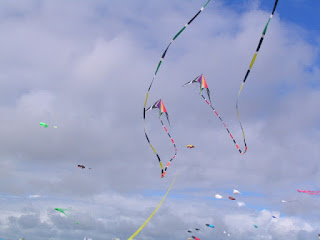 Team Spectrum was present, of course. I can hardly remember attending a kite festival where they were not flying. Because their slots consist of several routines (Carl flying two kites, Bryan and Carl flying as a pair, Carl flying three kites), requiring frequent changes of kites, we ground-crewed for them this weekend, and that gave me the opportunity to take a photo of their pairs routine with tails from a different angle.

The Flying Squad, although first and foremost a quad-line team, also flew a few brief 4-man (on Saturday) and 5-man (on Sunday) dual-line routines. 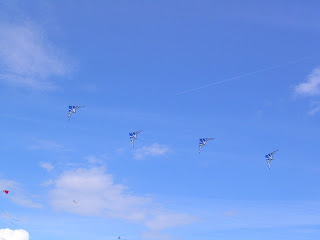 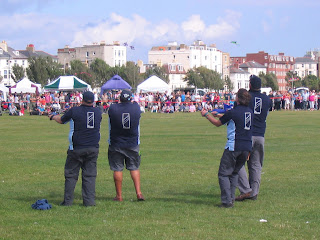 Useful that their 5-man routine included a pattern that we're also starting to practice with the full L-katz team, so we could get a feel for how it's supposed to be flown! 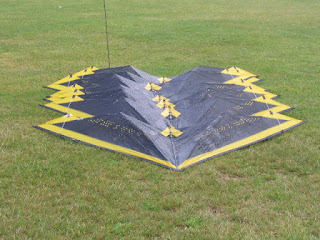 But the highlight of the festival for us, and the performance we'd been most looking forward to, was Cerfs Volants Folie. Of course, we knew about them, and had seen video clips of them flying, but had never seen them fly 'in the flesh'.

Well, they really did not disappoint, and it was clear why they came 5th in the recent World Championships!

Their routine started off with three female members of the team (aka Cerfs Volants Folie Filles). 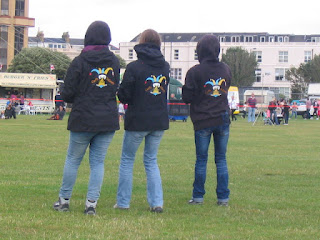 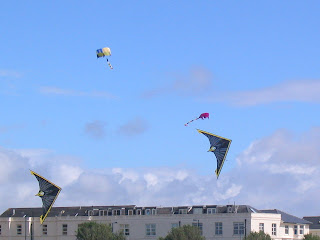 Once they'd finished, a 6-man team took over. 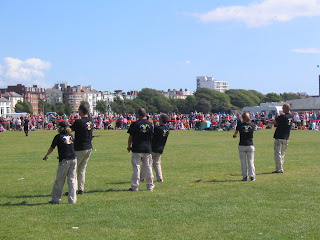 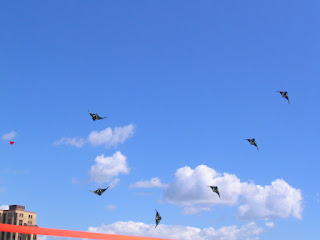 And then the girls joined in again, for a 9-man routine. 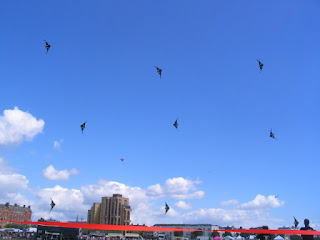 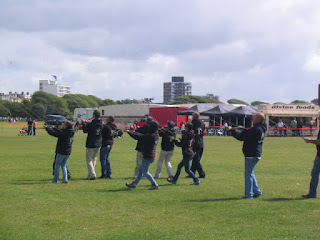 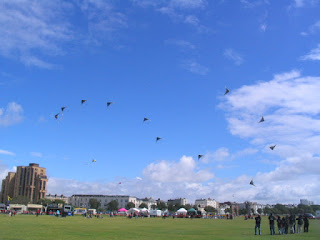 Our focus in this blog is on dual-line team-flying, but I certainly don't want to finish without giving full credit to the quad-line teams. I already mentioned The Flying Squad, who put on a great quad-line routine, as did the Decorators, Fusion, Air-4-ce (who had to miss Saturday due to being stuck at Schiphol Airport; glad they could still make it on Sunday) and a team consisting of James Robertshaw, Carl Robertshaw, Chris Goff, and Gregory Reynes (if they have a name for their team, I missed it; sorry!). Lots of the quad flyers got together for a Rev mega-fly, which is always great to watch. 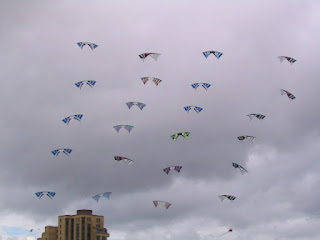 Can't wait for the new kite festival season to kick off again next year!
Posted by flyingfish at 13:43 1 comment:

Come to any kite festival, and you can usually tell immediately where the various display teams have pitched camp. Banners proudly proclaiming their team name are flying high above their tents. We wanted something similar for Flying Fish, but at the same time, do it in a slightly different way ....

Walking around the trader's stalls at the Brighton Kite Festival, we got an idea as to what to do in terms of a 'banner' for Flying Fish: a few fish-shaped windsocks, flying from a pole! 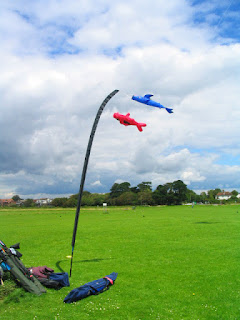 So we got ourselves a pole, ground stakes, a pole sleeve, and of course two fish-shaped windsocks; all from the Go Kites stall. And here then, in full-blown action at Stokes Bay, the 'banner' that will readily identify the Flying Fish tent at upcoming kite festivals. Fittingly, one of the fish windsocks is in the shape of a shark, just like one of our first pair of team kites.

The sleeve over the pole has a few more attachment points, so we will keep our eyes open for one or two additional fish to add to our 'banner'. But not just any fish; only if we really like them! 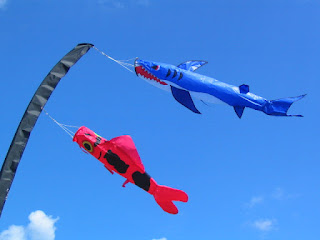 So if you see these fish fly at a festival, you know we're there; come say hi!
Posted by flyingfish at 18:07 2 comments:

I'll say it upfront: this is a shameless plug. As our quiver of pair/team kites expanded, we were struggling more and more to keep it organised and easy to take to the flying field. Some kites were in one larger kite bag, some in another, smaller one. Lines weren't always with the kites they were supposed to be used with, so, to put it bluntly, it was quickly becoming a bit of a mess. Unfortunately, although there are several specialised kite bags on the market, none was suitable for our purpose. Many are too short for full-size team kite, and none would allow all my kites to be together with my lines and other stuff, and the same for Irma.

And then, as if he was aware of our desperation, Keith Griffiths posted on the Fractured Axel forum that he was looking into getting a dedicated team kite bag made, and whether there was any interest in this? Yes, put me down for two, rightaway!!!

So here they are then! 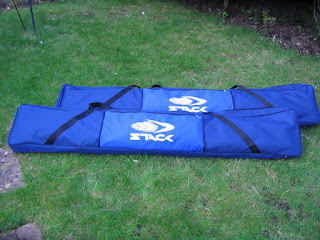 A full 1.80m long, the bag officially fits 9 full-size kites, and has removable pockets for 6 line-sets. There is also a thin long pocket inside the bag which can take half a dozen or so spars, and on the outside there are two large pockets to store other 'stuff' (leader lines, brakes, tails, etc, etc). The kites are held in place by a small pocket on one end and a velcro-strap on the other. Although there are pockets and straps for 9 kites, I have had no problem fitting in another 5 or 6, snugly lying between the others. 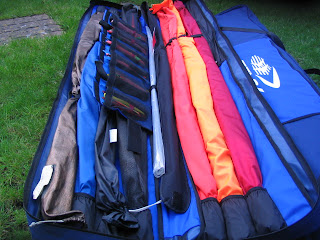 Having used them in the field now for a few months, they really are the bee's knees for anyone wishing to bring a good selection of full-size kites plus multiple line-sets and other bits 'n' bobs, whether you're going team-flying or trick-flying. They're not cheap (£65 for STACK members, £75 for non-members; both prices plus p&p), but perfect for the job. Keith told me bags are still available; drop him an e-mail at keith.griffiths@physics.org if you're interested!
Posted by flyingfish at 14:01 1 comment: 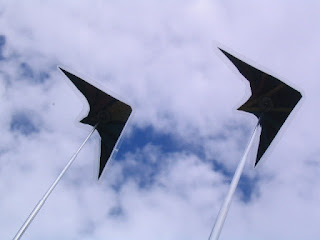 Following our flying at Southampton and Brighton, we got what more or less amounts to invitations to fly at both the Basingstoke Kite Festival and the Brighton Kite Festival in 2013. Clearly, with that in mind, we want to be able to offer something new in addition to our current routine. We've got lots of ideas for new routines, but to avoid us working on half a dozen routines over the winter, and not finishing a single one of them before the start of the new festival season, we decided that, for Flying Fish, we will focus on two routines (L-katz is a separate story; I'll talk about the L-katz plans in a future blog post).

At our Festival début, we got really good comments from the likes of Keith Griffiths and Fran Burstall. They liked the level of synchronicity, especially the circles, but felt we should try and put more elements in the routine where the kites are doing something different, for instance mirroring each other, and so avoid the majority of the routine showing kites flying in synchrony, doing the same thing. That's good and constructive criticism, and we can definitely do something with that. No, we will definitely do something with that!

So the first thing we're going to do is take our "Ruthless Queen" routine, and work on a second version of that, especially introducing a few more elements where the kites are doing something different. We have some ideas already as to what to change, what to introduce, and what to leave out, and we will need time on the field to see what works and what doesn't.

The second routine we're going to work on is one especially for our Fish & Shark kites. The plan is to write a routine to the theme music of the movie "Jaws", and to have a bit of a story line in that routine. This is something we've wanted to do for quite a while! Actually, we already made a bit of a start on this before we started on the "Ruthless Queen" routine, but shelved it to focus entirely on that routine. Reason was that that routine can be flown with any kites, whereas a "Jaws" routine is essentially specific to one pair of kites (of course, it can be flown with any kite, but without the Fish & Shark there is less of a 'story'). And if you've forgotten what the "Jaws" theme music sounds like, here's a reminder:

As to whether we will be successful in the Shark chasing the Fish to music, and whether the Fish will avoid being eaten by the Shark, you'll have to come see for yourself in due course!
Posted by flyingfish at 18:28 No comments: