When we started flying competitively, in 2014, our competition ballet was with music: flying various moves and patterns with music in the background, but not with every move specifically linked to something in the music. The feedback we got then, quite rightly, was that we should try flying more to music, reflecting the music with the movement of the kites.

We decided to implement this in two stages. First stage would be to take an existing ballet to music. This would help us flying to music, adapting the speed of the kite to make sure the kites were where they needed to be all the time, and doing what they needed to do when they needed to do it. Ron Reich's 'Chariots of Fire' was the ballet we used, and this became our competition ballet in 2016. Second stage would then be, having experience in flying to music, to write a ballet to music from scratch. The plan was to have this new competition ballet (to 'War of the Worlds') ready for the 2018 competition, but we had severely underestimated the time it took to write a kite choreography completely from scratch. The process of writing a wee bit, trying it out in the field, tweaking it until it's ok, then writing the next little bit, etc, took so much more time that in the spring of 2018, we came to a decision point: continue with the new ballet and still try to get it ready for the 2018 season, or abandon it for now, and tweak the 'Chariots' ballet for one more year. Given how much work was still needed on the 'War of the Worlds' ballet, given we'd never written a complete kite ballet from scratch, and given the limited time we had to complete it, we decided to keep 'Chariots' for 2018. As some of you know, that wasn't too bad a decision in the end, as we became Narional Champions with it!

As soon as the 2018 Nationals were behind us, we picked up the 'War of the Worlds' ballet again, and I'm pleased to say we have now completed the basic choreography! 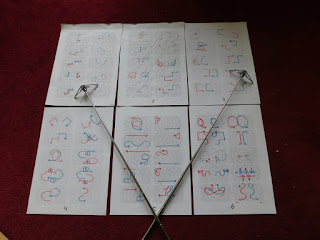 As I'm writing this, we've flown the first two thirds in the field, and sticked the entire routine about a dozen times now. We still haven't flown the final ~45 seconds in the field yet, so it may still need a bit of tweaking here and there. But we have plenty of time to do this, so unless something disastrous happens, this will be our new competition ballet.

The main feedback we got on our 'Chariots' ballet was four-fold:

* not enough sharp corners - the new ballet has more of that

* music is too samey - the new ballet has more variation musically, so more opportunity for change of tempo

* kites are behaving too much the same, either parallel or mirrored - new ballet has more 'asynchronous' flying, with one kite doing something different from the other

Of course, it's up to the judges in the end to say whether we have upped our game with this new ballet, but we're quite pleased with it. Whether it will be enough to retain our title, only time will tell!

One of the first, if not the first, dual-line kite specifically marketed in the UK as an 'ultralight' was the Kite Store LiteFlite. Few years ago, I got my hands on a LiteFlite for very little (£15 if you want to know), as I was curious about this very early ultralight, officially stated to have a wind range of 4-15mph. 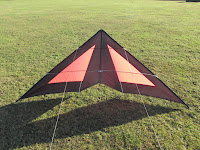 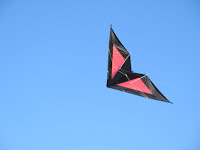 Let's just say I was underwhelmed by the kite ... I felt it was unresponsive, didn't turn well, and I really didn't click with it. To make a short story even shorter, the kite quickly disappeared in a kite bag, never to come out again ...

Fast forward, and I was more or less given another LiteFlite (I bought a Spin-Off from a fellow kite-flyer, and he basically threw in the LiteFlite). Just prior to that, I became aware that some early UK teams (The Blitz, Blast) actually flew LiteFlites for a while. Well, if teams like that considered the kite good enough to use, I ought to give them another chance, right?

Second LiteFlite was first flown on its own, in a mostly 6-9mph wind. 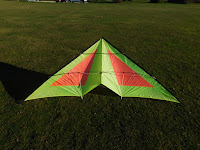 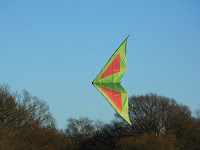 It certainly didn't fly as bad as I remembered. Quite slow flight with reasonable tracking; little oversteer or understeer. But it really struggled with lack of constant wind pressure on the sail. If that occurred, say, at the edge of the window, the kite would become totally unresponsive and likely to flutter out of the sky. My guess is that this at least partly caused by the kite being pretty flat. It does have long stand-offs, but these are not at a 90 degree angle with the sail, thereby creating a clear 3-dimensional shape; rather, the angle is more like 30 degrees, resulting in said flat sail. 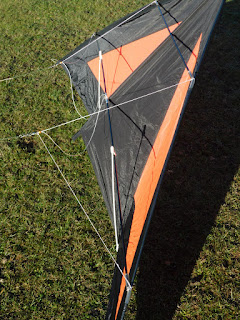 Keeping their weakness in mind, time to fly them as a pair! 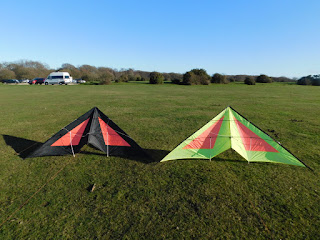 There was no need to tweak the bridle of any of the two: they were matched in speed from the off. 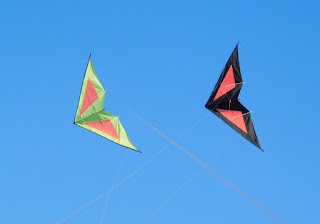 It's clear that I wrongly dismissed the kite as unflyable a few years ago. We could fly basic pair shapes without too much problems, though we had to take care to always keep wind pressure in the sail. Something vaguely resembling axels and half-axels could be squeezed out of them, but they clearly weren't happy doing those (the flat sail again ...).

It definitely was interesting to fly a pair of these very early ultralights. If someone would like to see them in a festival arena (TC? Andy King? Paul Reynolds?), they only need to ask and we'll bring them.
Posted by flyingfish at 17:41 No comments: