As always, Portsmouth Kite Festival represents the close of our festival season, but there was one big difference for us compared to last year: we were officially invited flyers! We were pretty lucky with the weather on both days in that it remained dry all weekend (I'm writing this the day after the festival, with the rain pouring down outside). On Saturday, the wind started out very light (< 3mph), but gradually increased to about 15mph as the day progressed. We warmed up with our T5 Cubans before there was anything happening in the main arena. 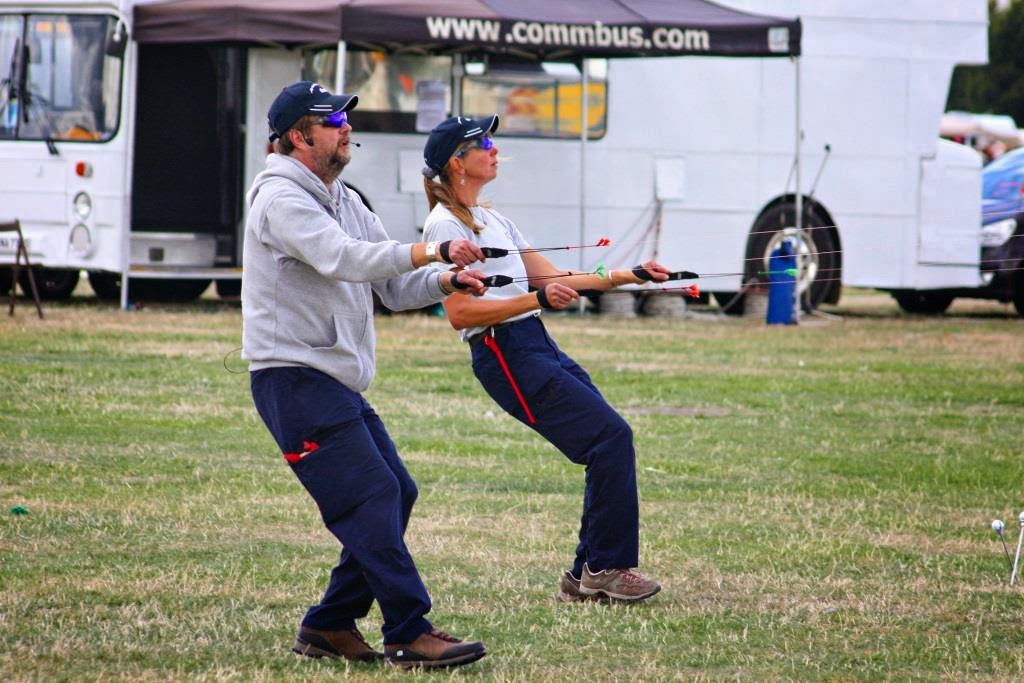 Our morning slot, flying both our Ruthless Queen and Adiemus routines, was flown with our T5 Taipan SULs. 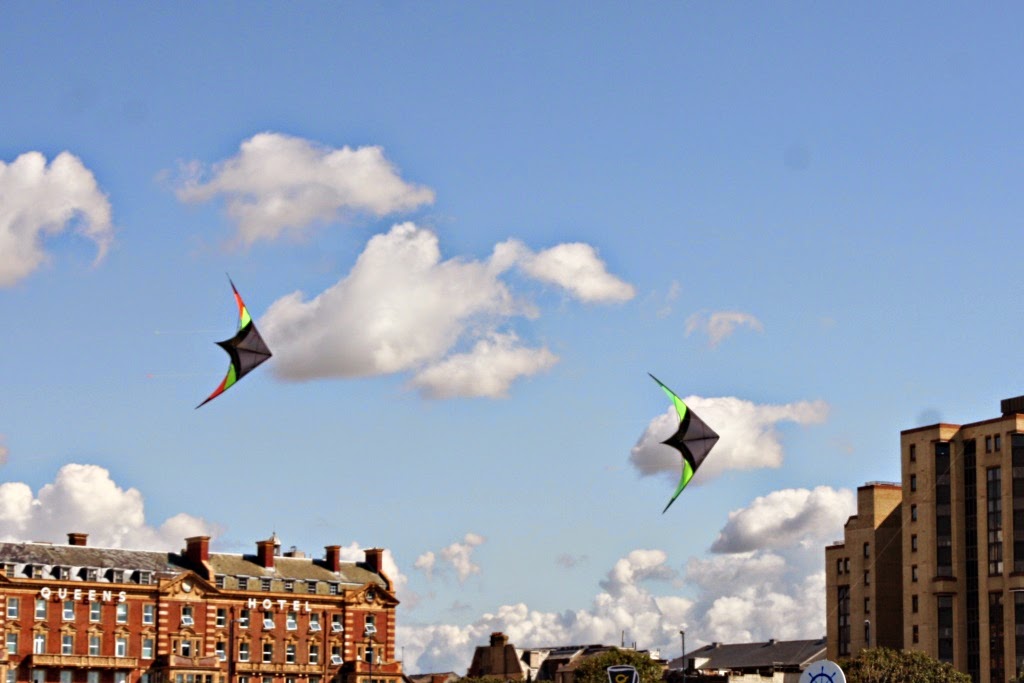 And the afternoon slot on Saturday we flew with our T5 Taipan Standards. 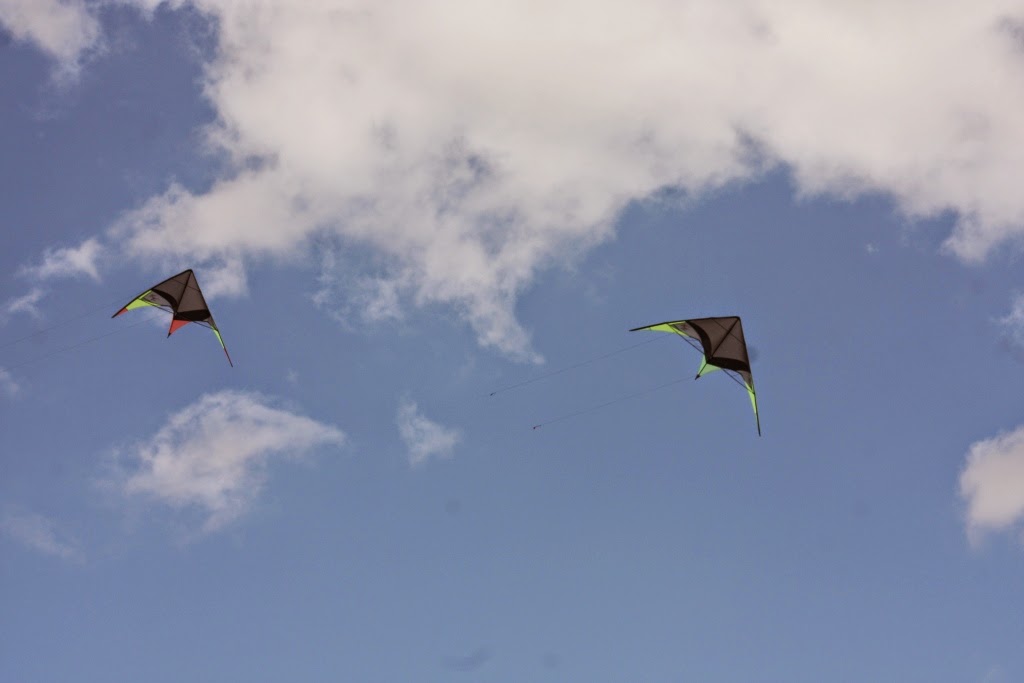 Sunday's wind was quite variable, mostly between 1 and 8mph. We were struggling with our T5 Cubans in the morning slot (especially during the Adiemus routine, the wind dropped to almost nothing). We stayed with the Cubans, but on heavier lines, for the afternoon slot as we really needed them for those 20-30 second periods where the wind dropped to very little. In general, we're pretty pleased with our official Portsmouth debut. The Ruthless Queen routines went without any obvious errors (always little niggles, but of course, the public won't have noticed; you're your own worst critic). The Adiemus routines didn't go as well as they could, especially the first one on Sunday. I think the concept of a 'make it up as you go along' routine does work, but we really need to add more patterns to choose from over the autumn and winter. And practice flying the routine with tails!

Two other dual-line teams were on the programme: Team Spectrum flew their usual festival routines (Chi Mai on Sunday, yay!) 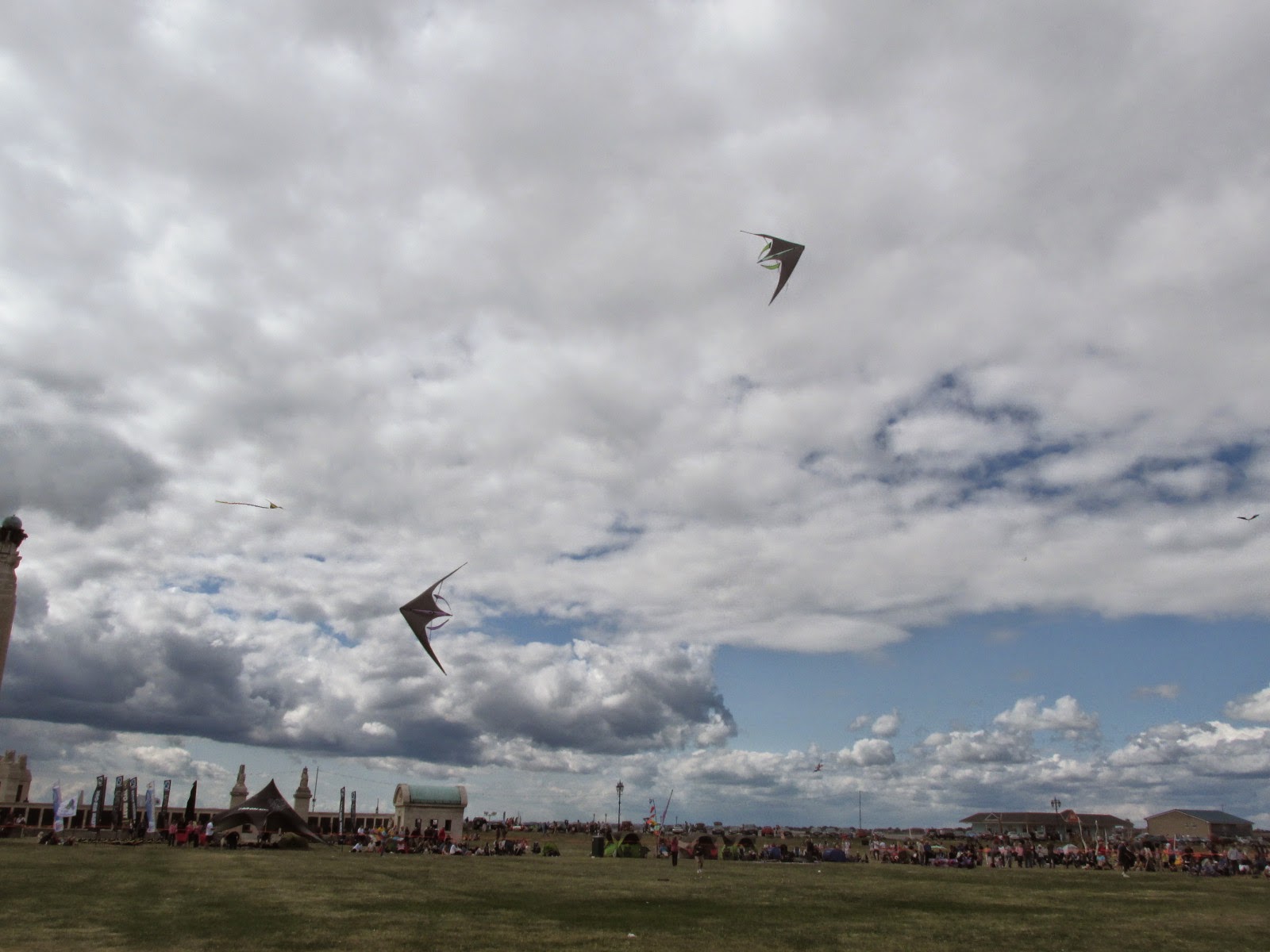 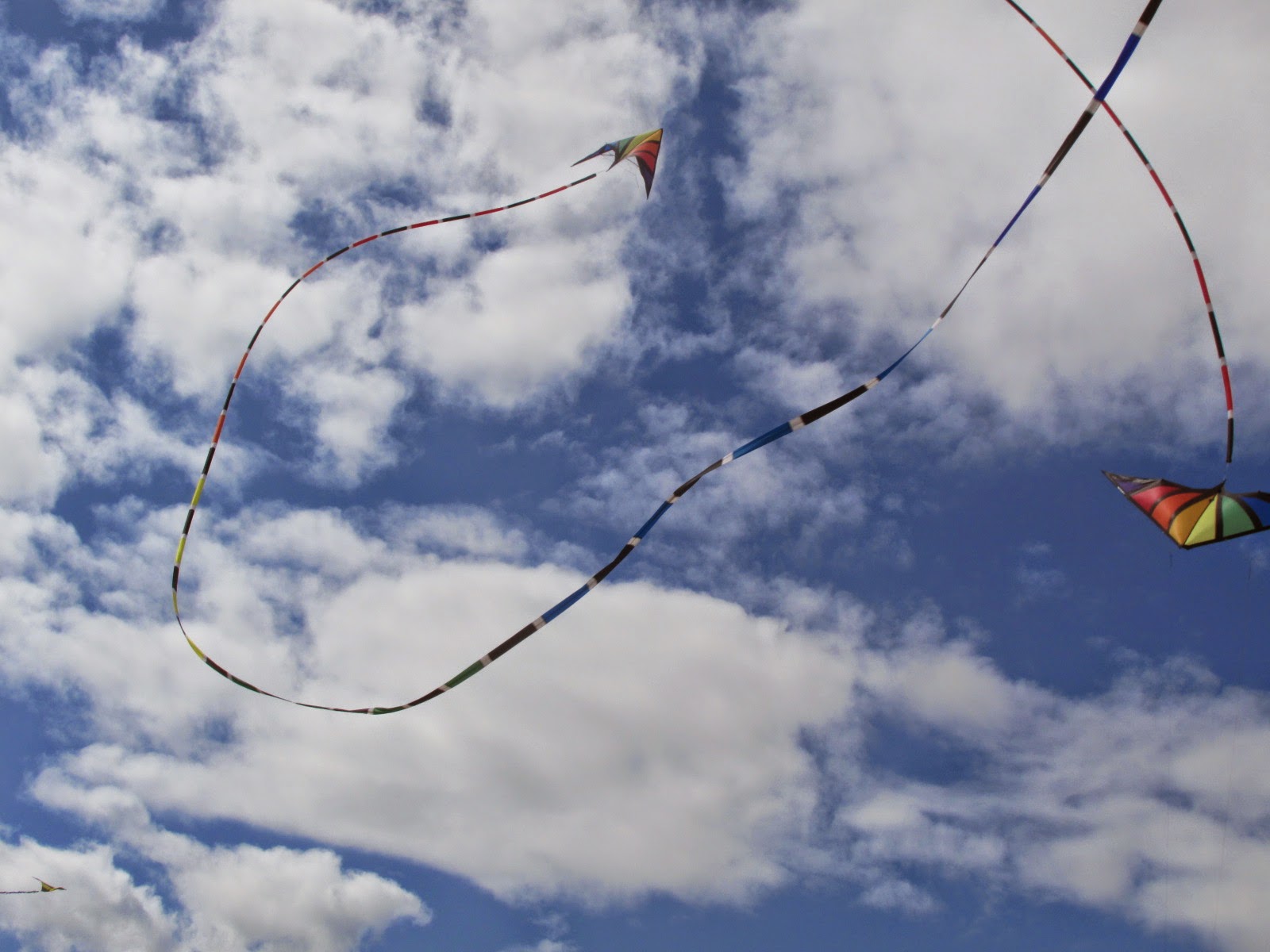 Cerfs-Volants Folie flew their Titanium routine, and this routine really shows off their unique and instantly-recognisable style of flying. Great to watch! 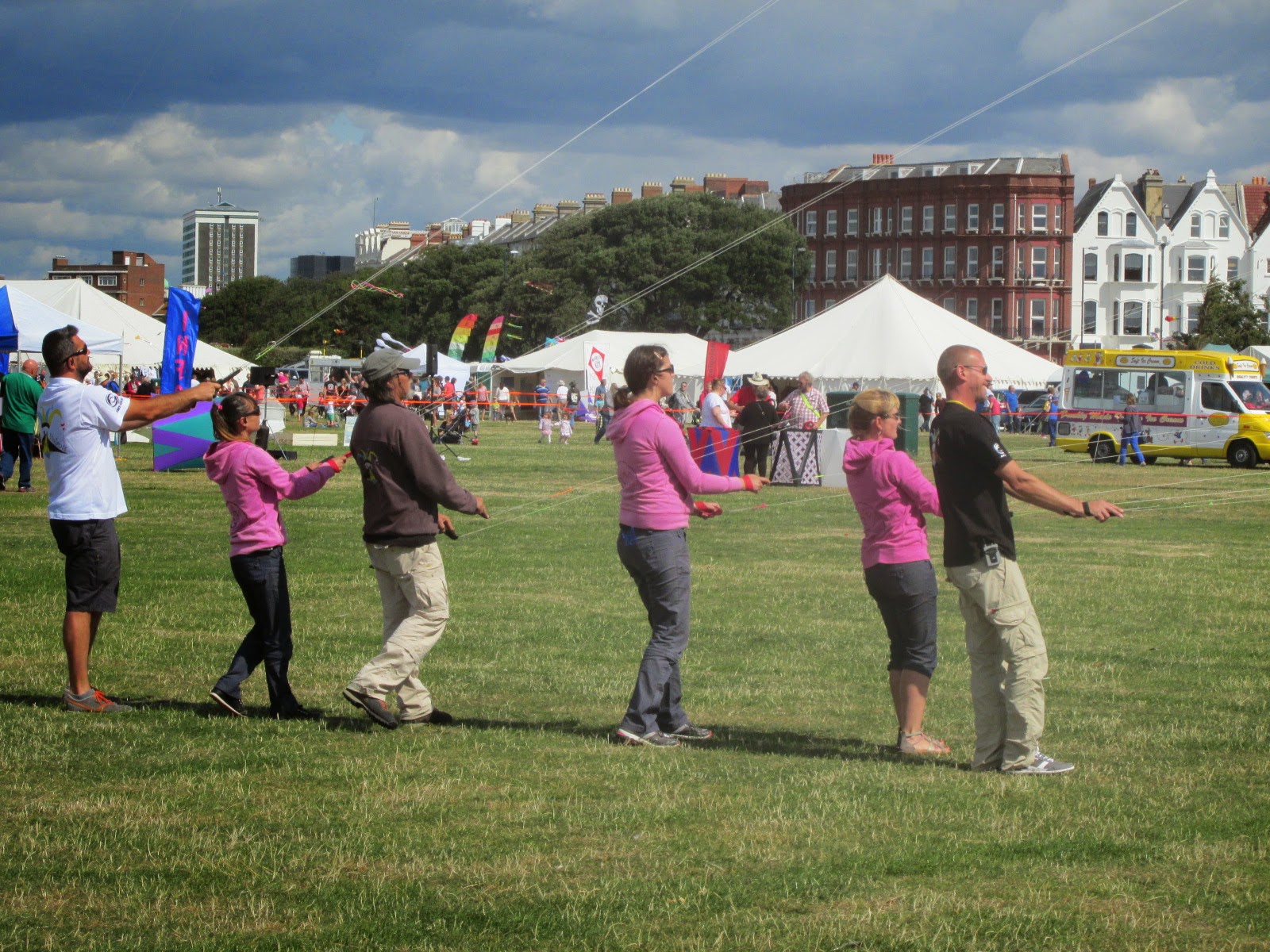 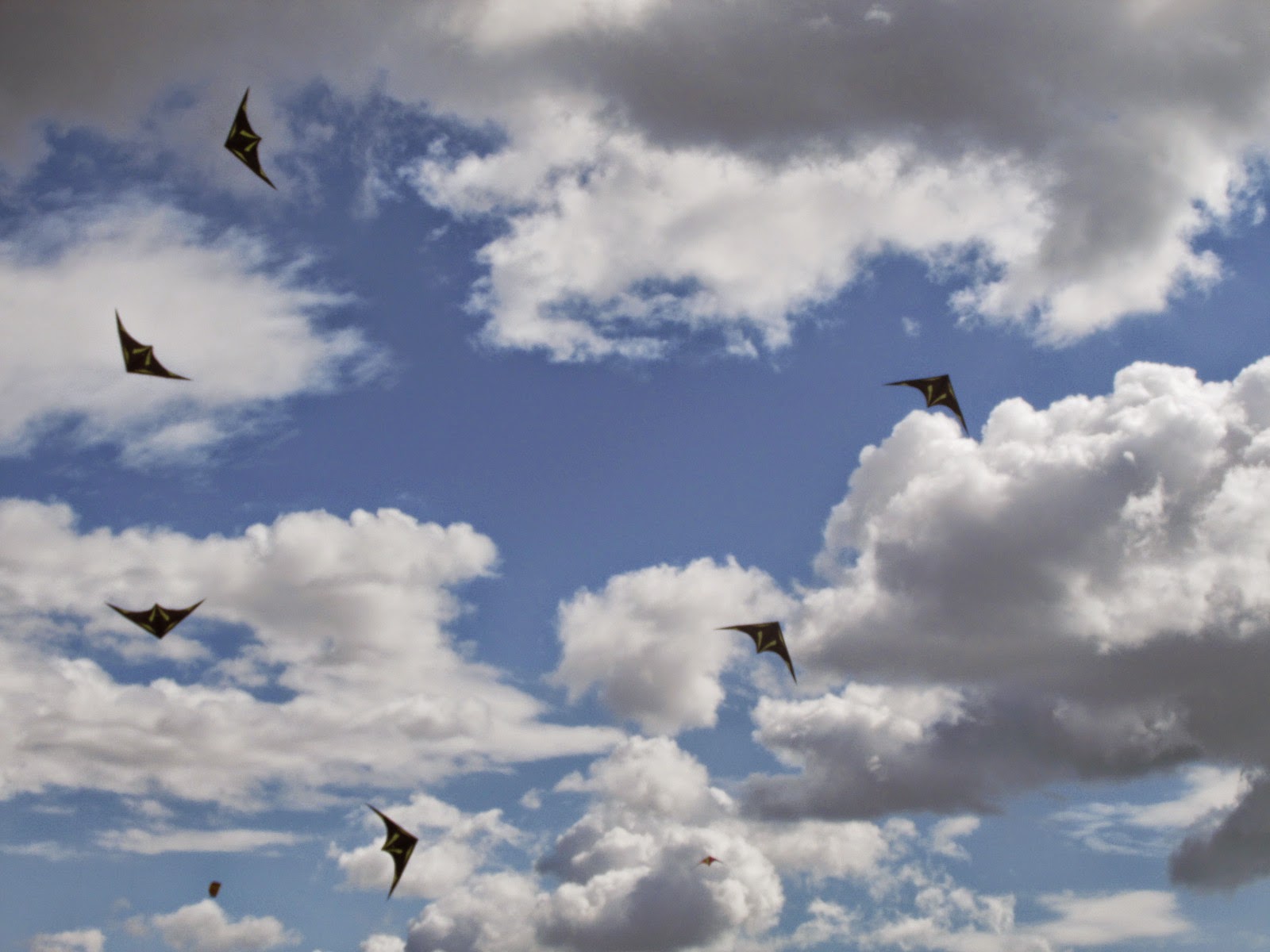 The three girls within CVF fly under a separate name: Mademoiz'ailes, and were joined by Lisa Willoughby for the weekend. 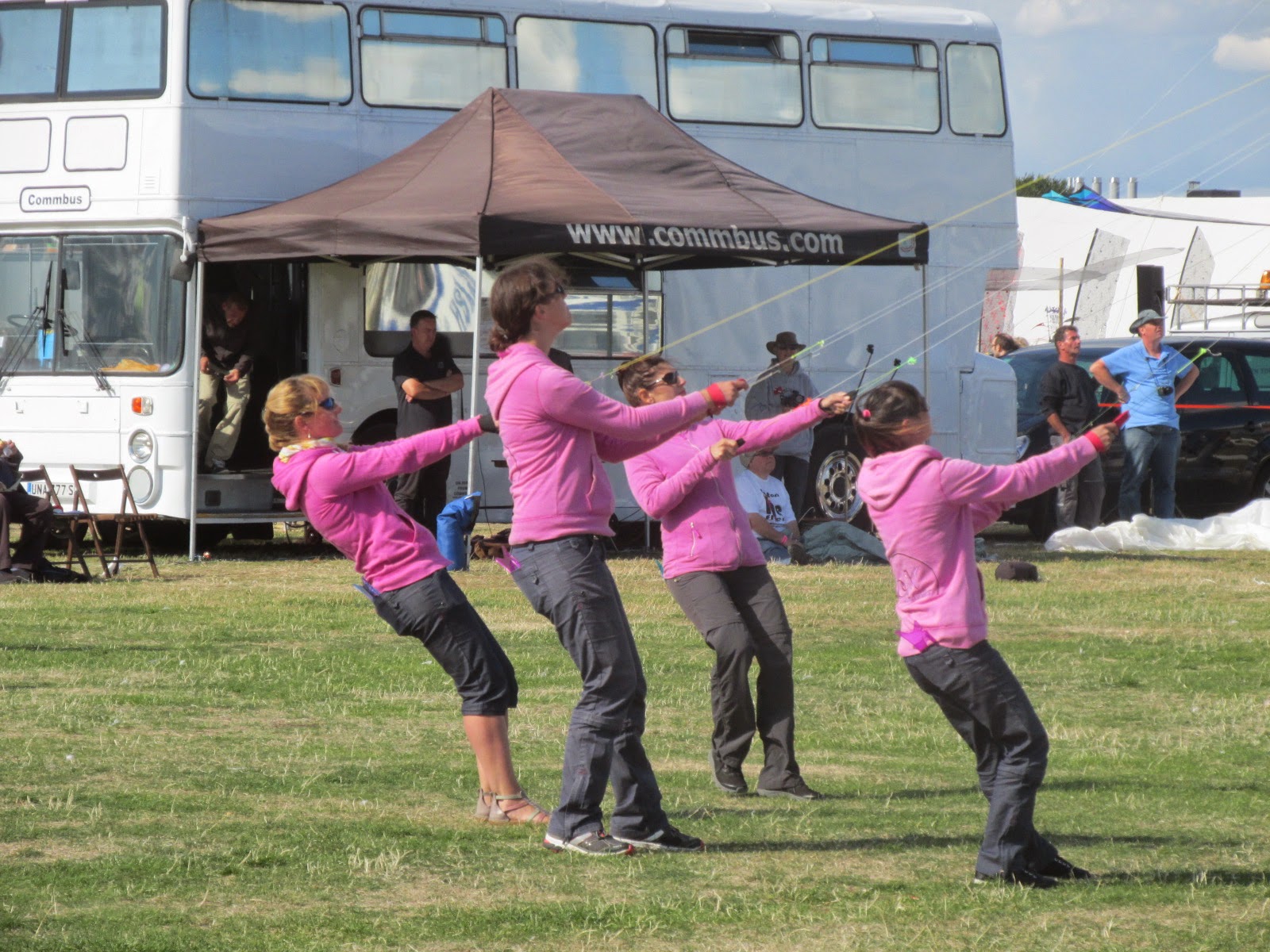 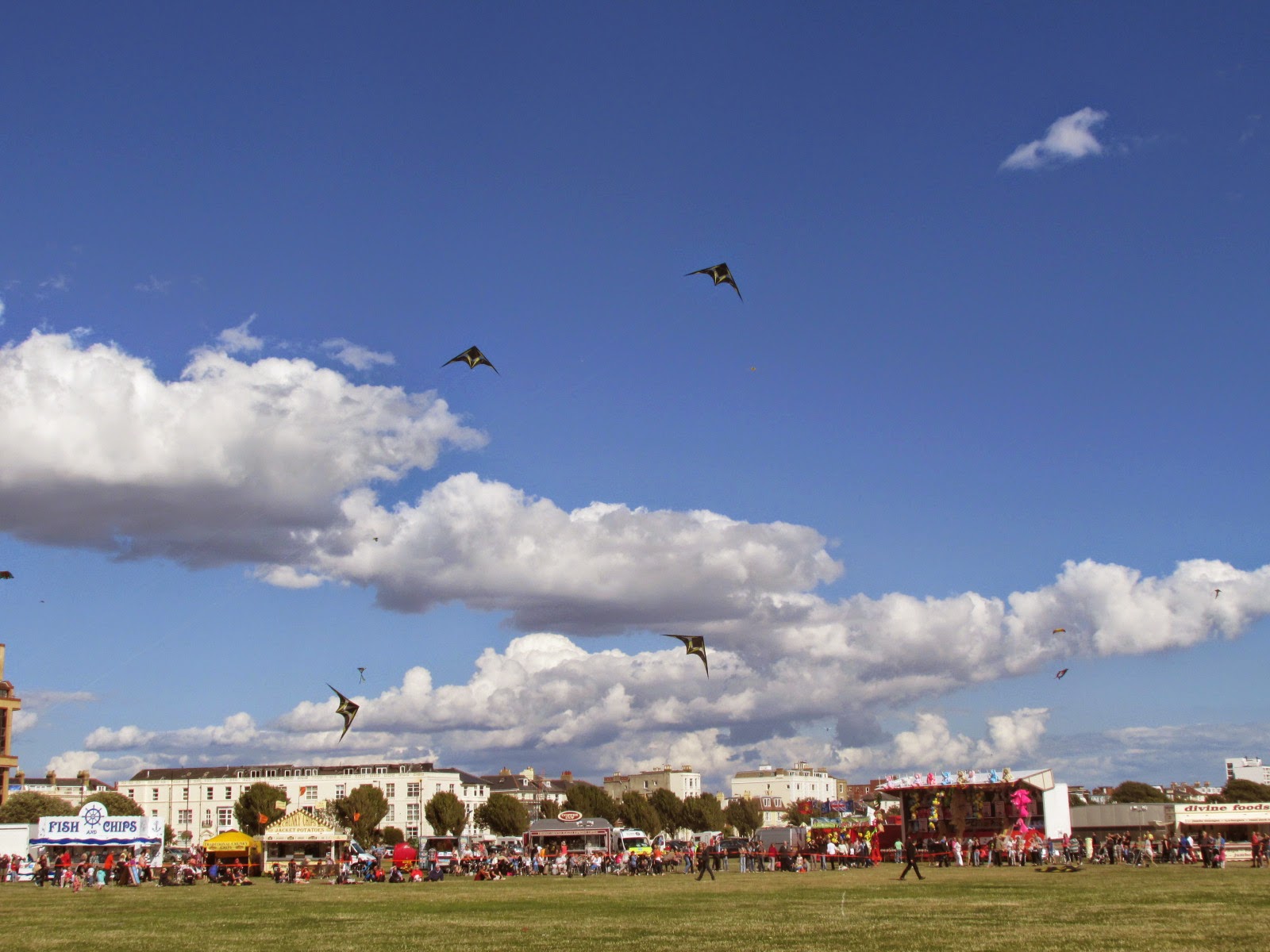 In terms of quad-line teams, the three leading UK Rev teams were present: 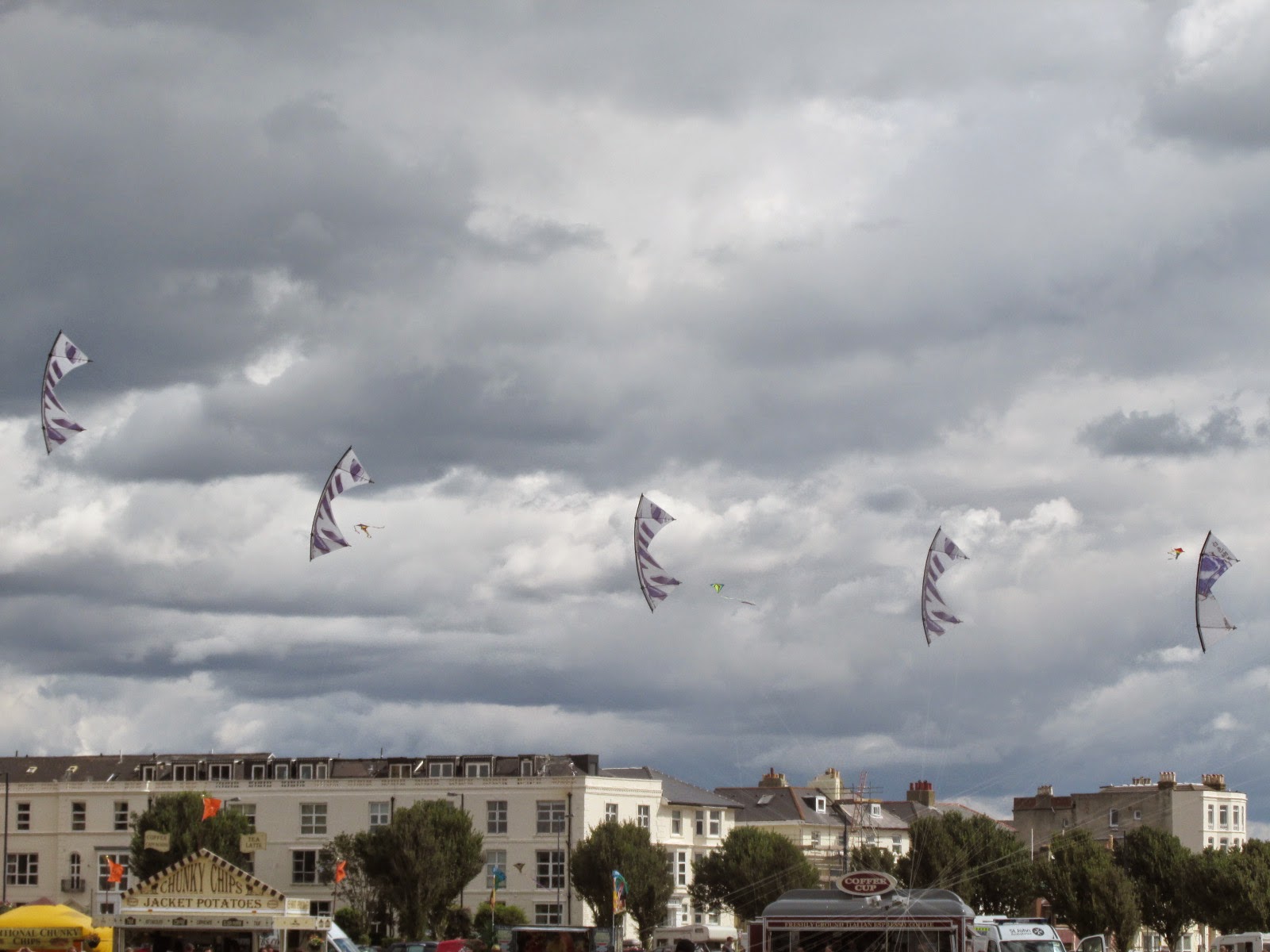 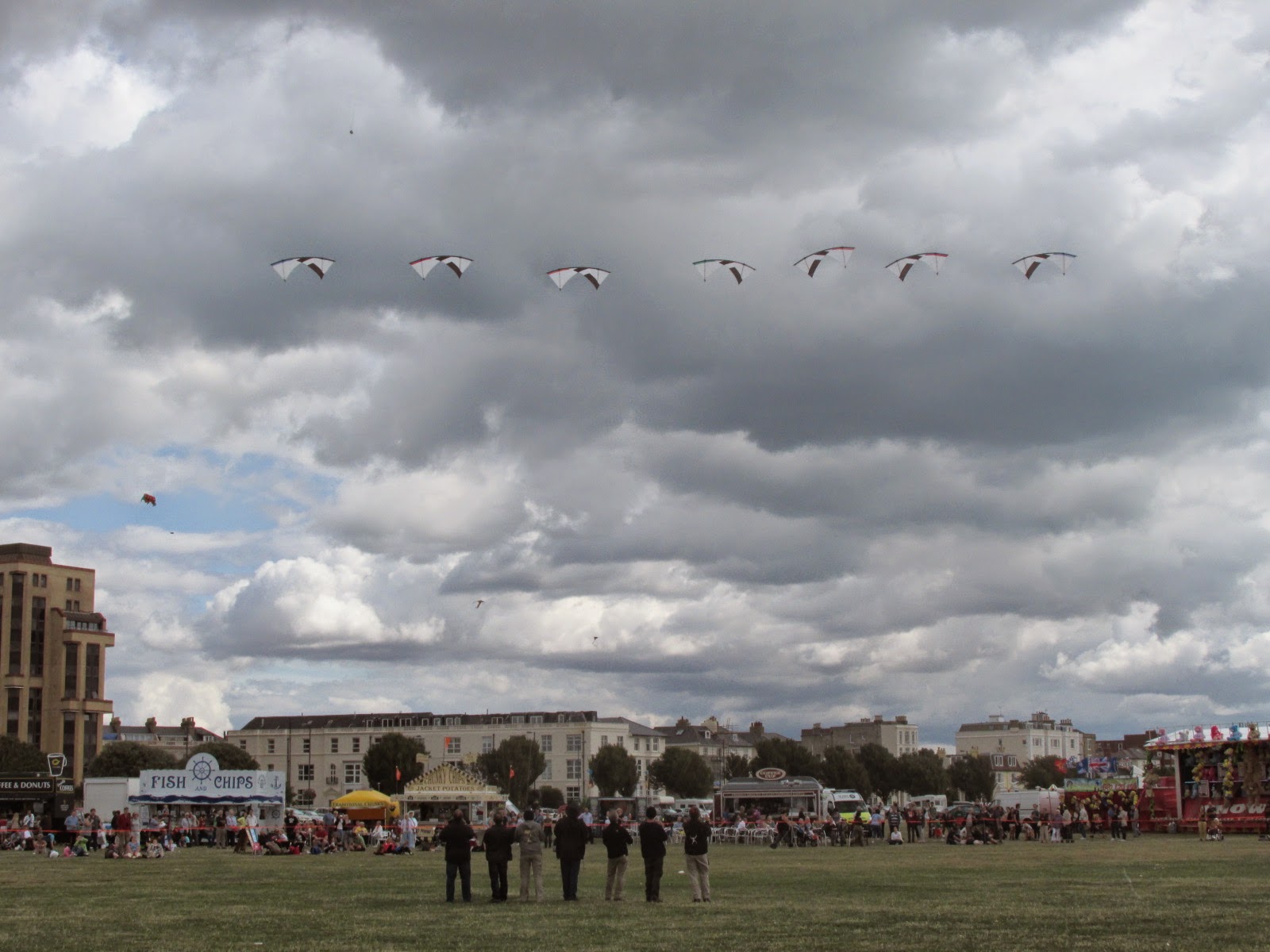 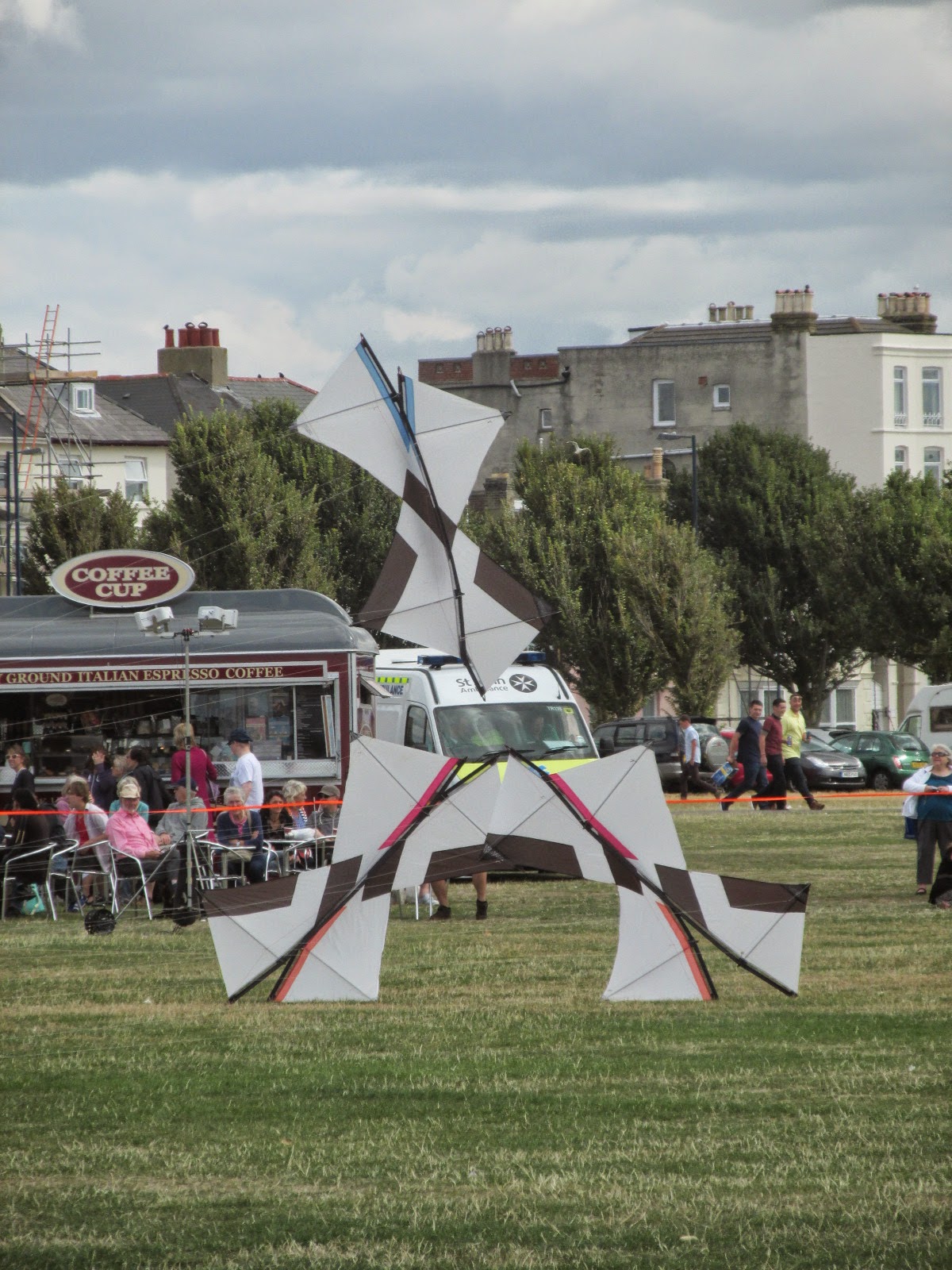 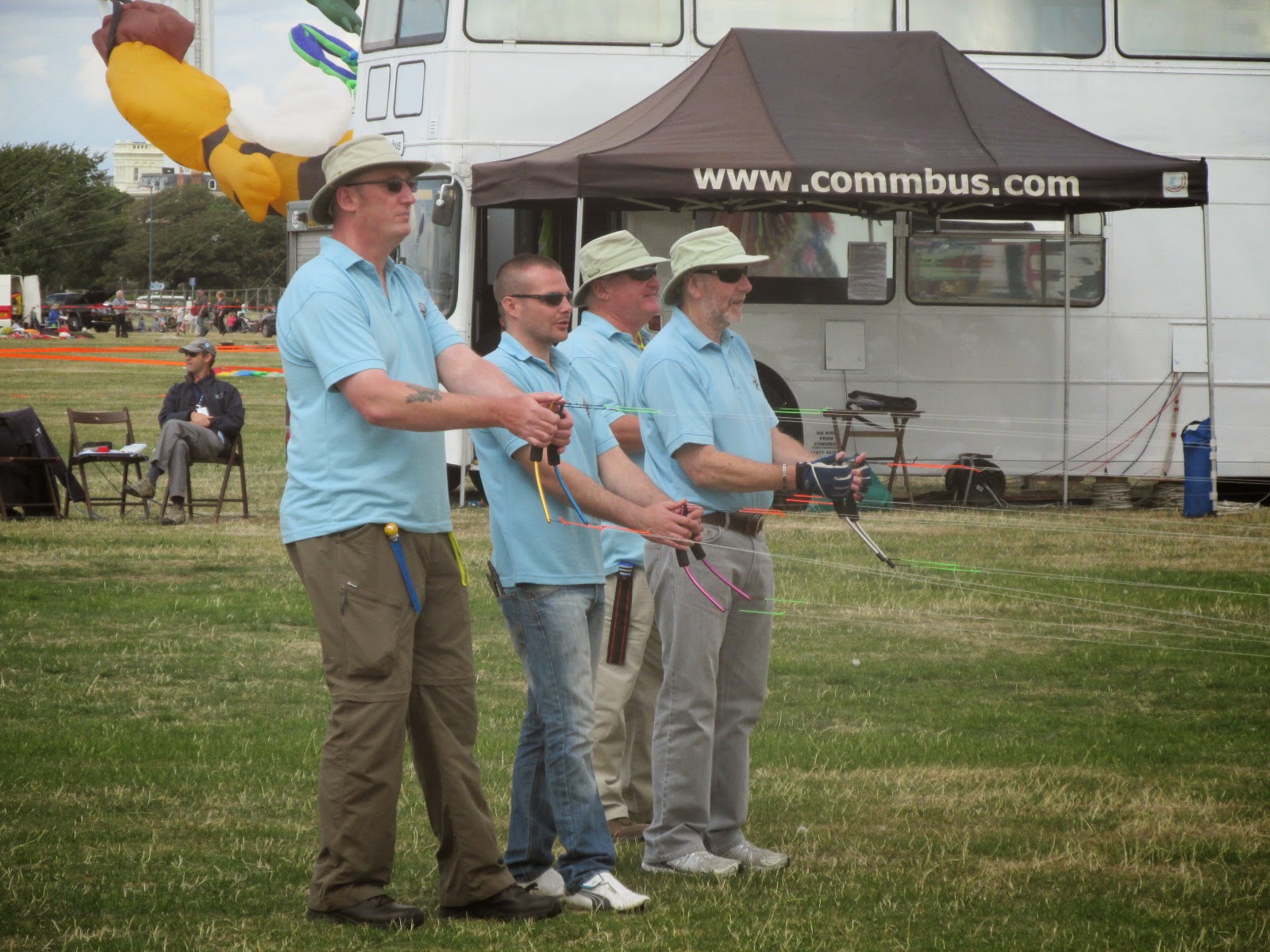 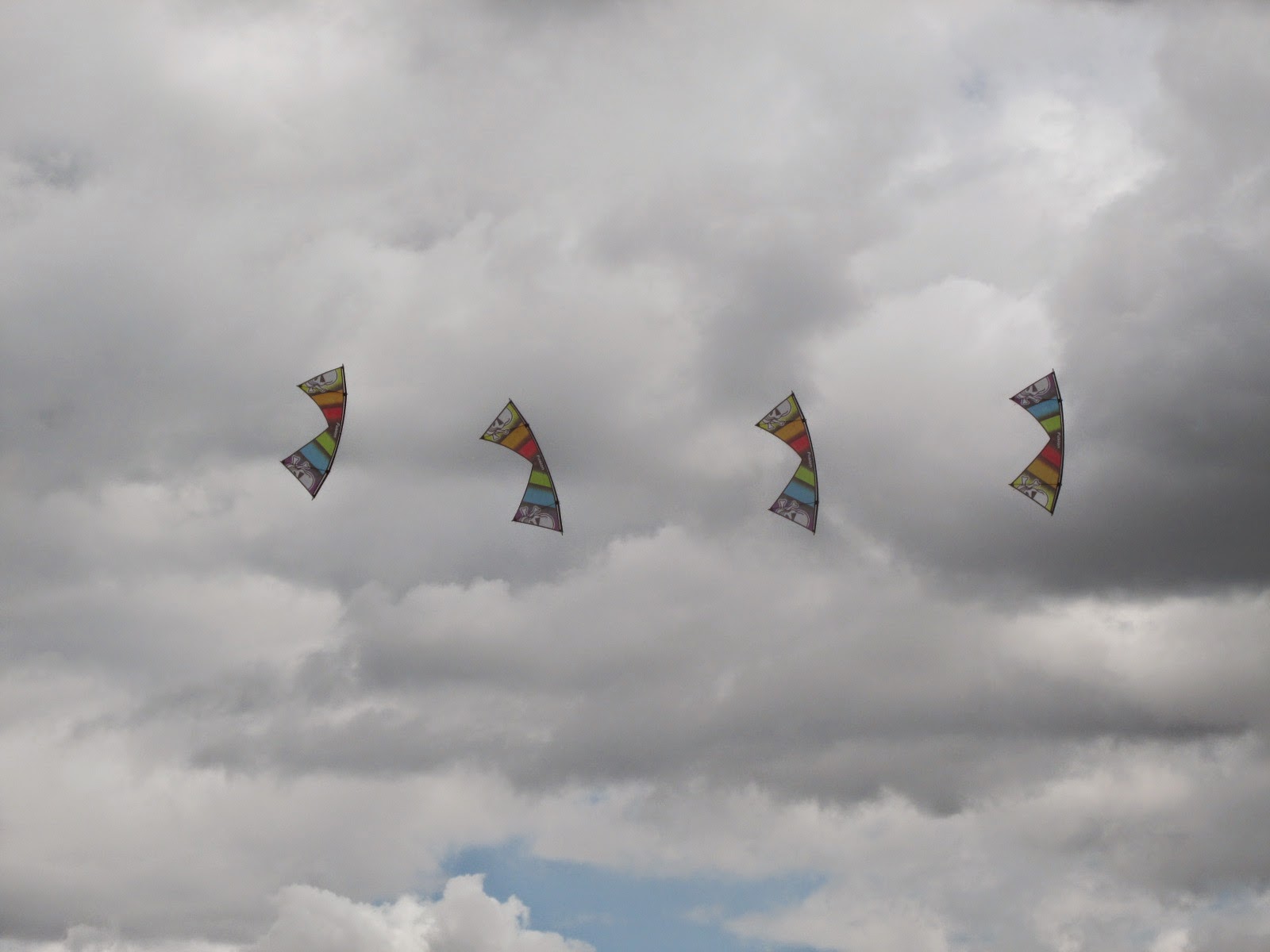 And with those three teams present, trying to stop them flying mega-team is impossible! 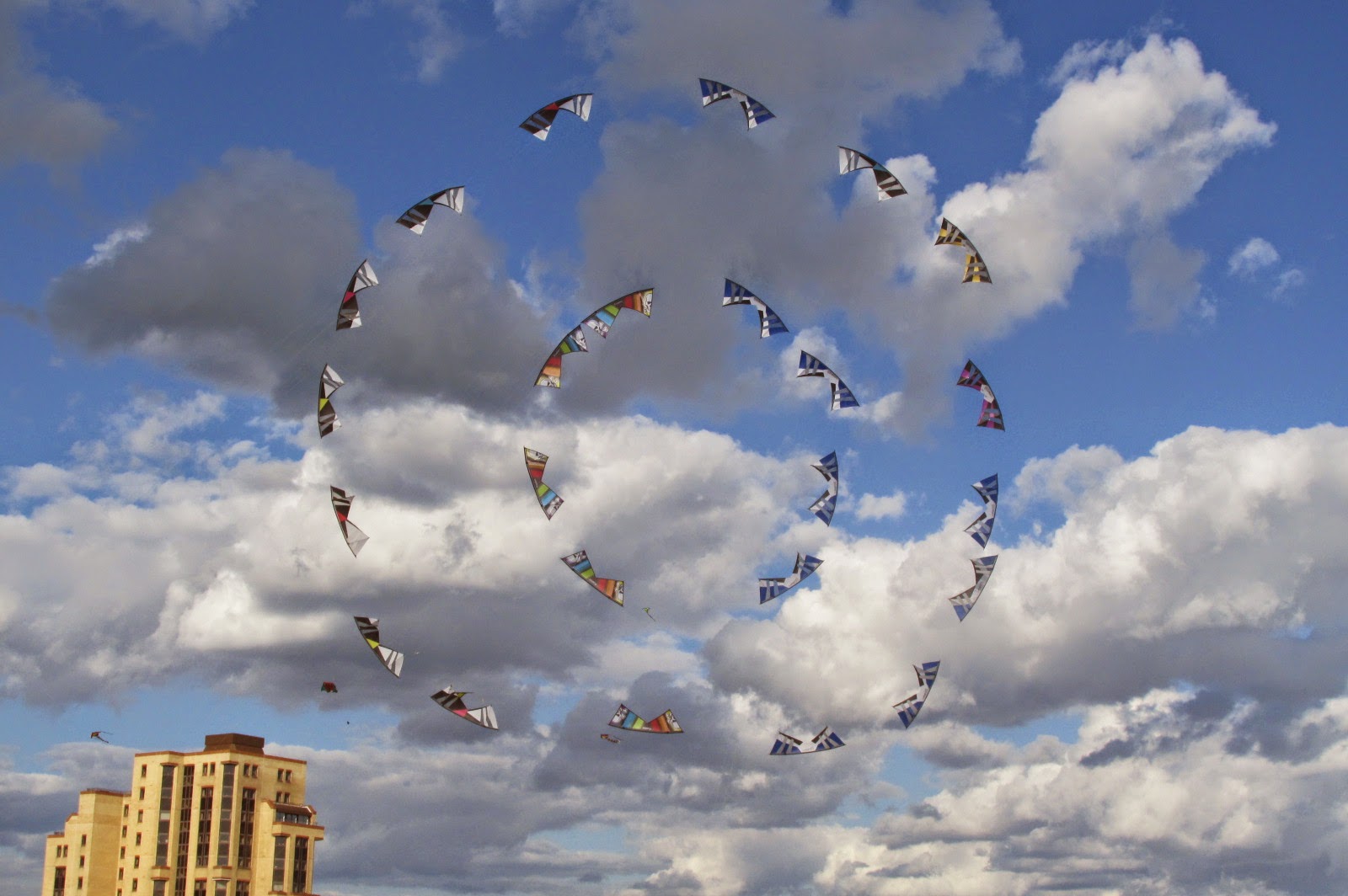 More pictures of the weekend are here, including a Vietnamese musical kite bridled for quad-line flying (!).

Picture credit of us flying: Roger Backhouse
Posted by flyingfish at 17:35 No comments:

Malmesbury turned out to be a festival of two halves. On Saturday, we had persistent rain until about 1pm, and then some brighter weather with one front after another coming through. Our Flying Fish banner pole snapped in a strong gust, and another one blew over one of the organisers' marquees! The original arena schedule went out of the window at the start of the day, quickly followed by several updated versions ... We did get some flying done in the quiet spells, with, believe it or not, our T5 Cubans. 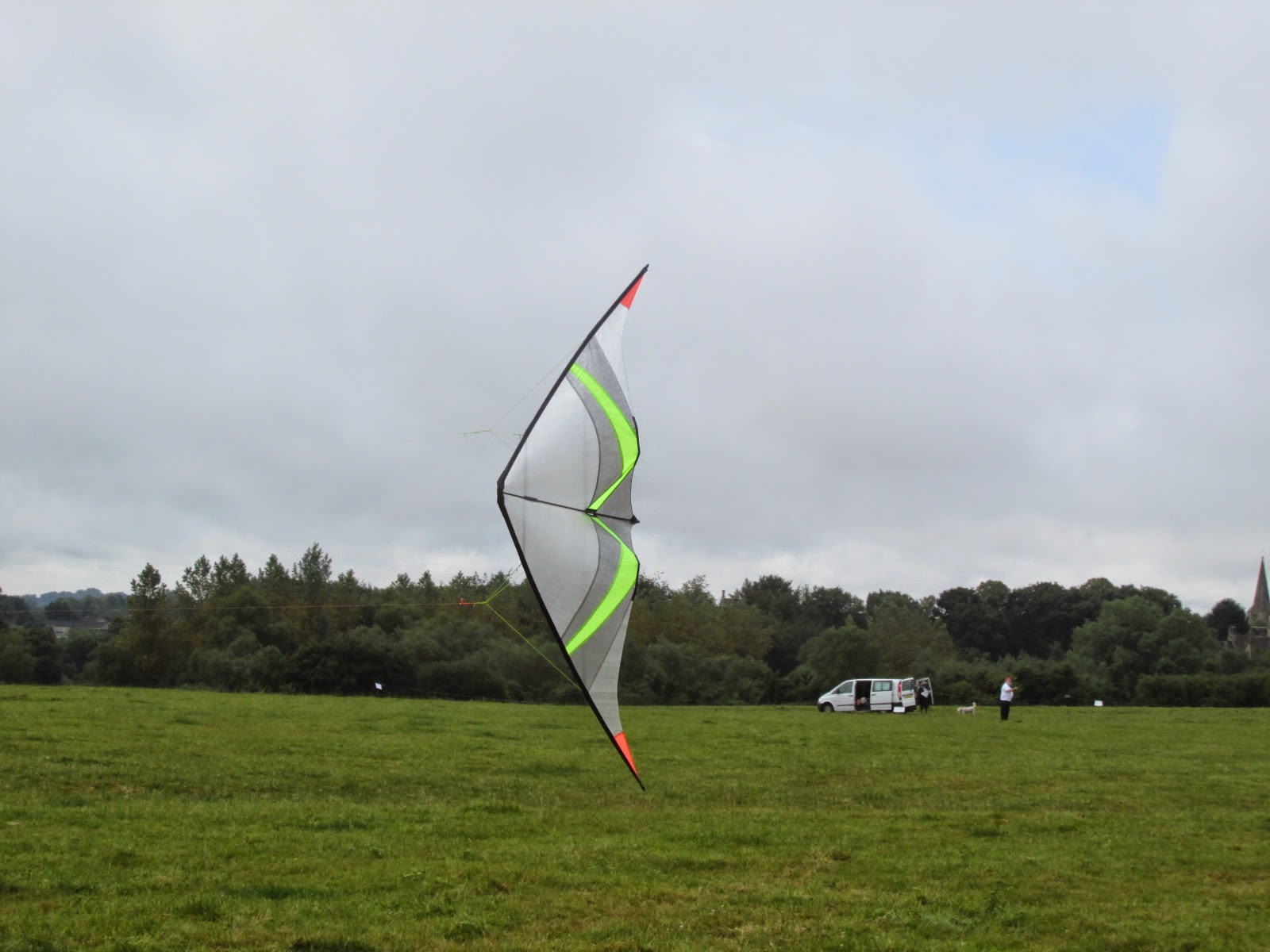 Sunday gave us a really nice sunny day, although the wind remained variable. Before our first slot, we flew our Taipan Standards, but then quickly changed over to the Taipan V1s for our main "Ruthless Queen" routine. For our second routine of the slot, to "Adiemus", we switched to our Peter Powells, but, exactly as we launched, the wind dropped, so it was back to the Taipans. Second slot of the day was Taipan Standards again for both routines. 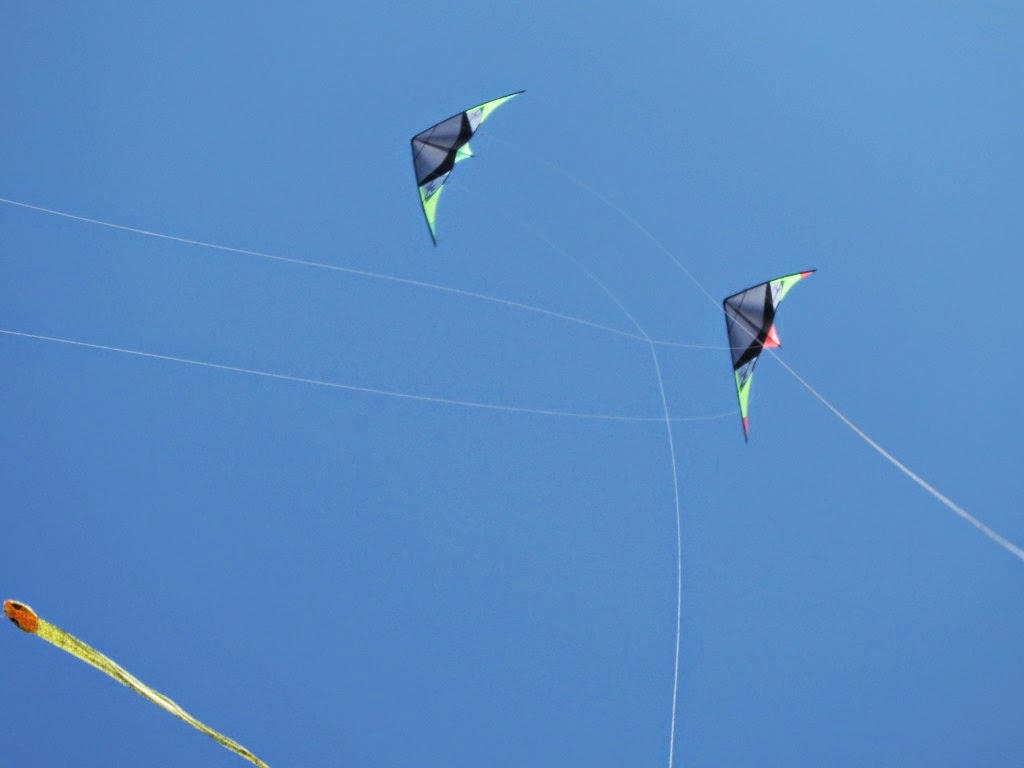 There were no other teams present at the festival, but Dave Salmon (of Sky Symphony) flew a one-man-two-kites routine ... 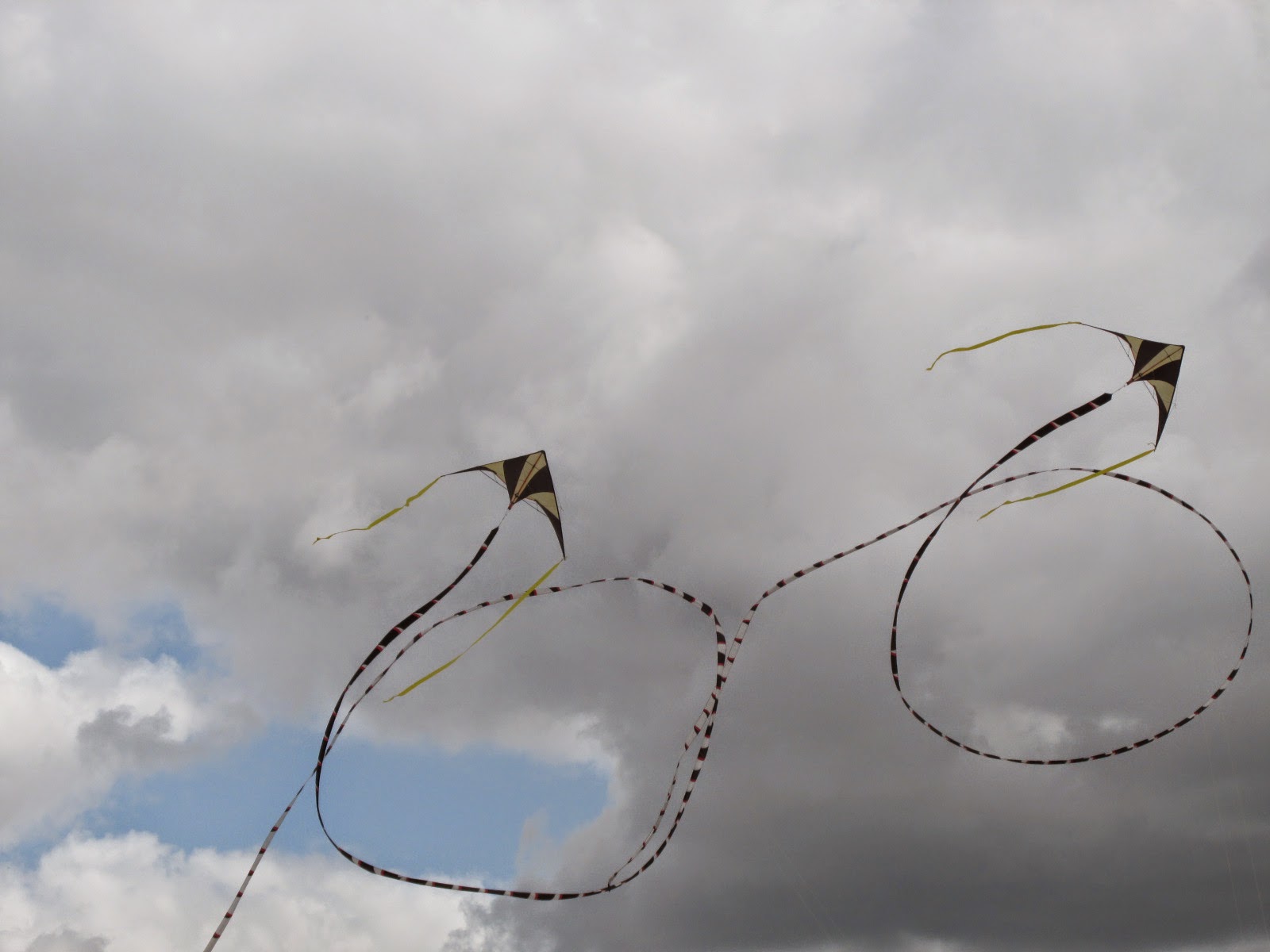 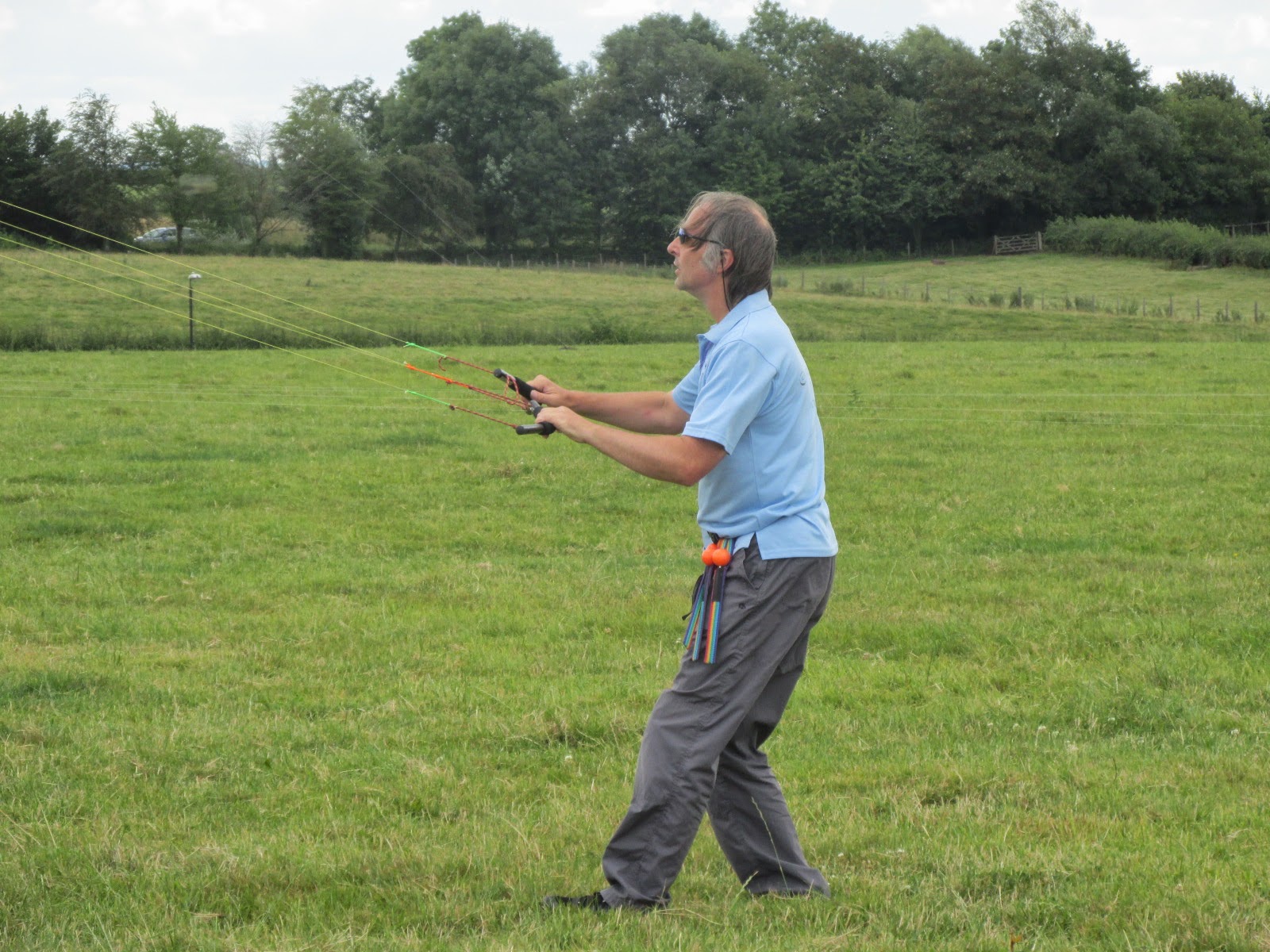 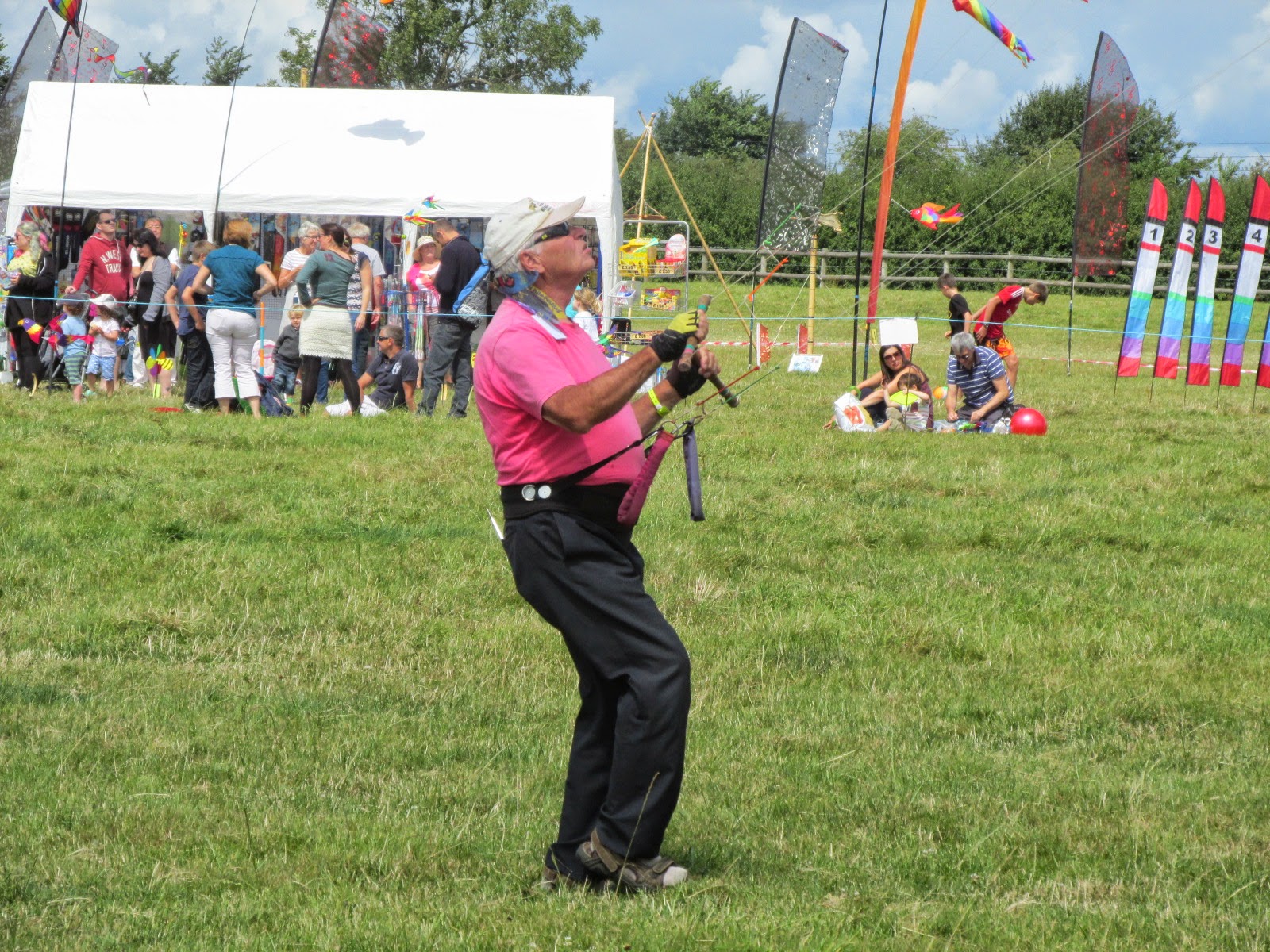 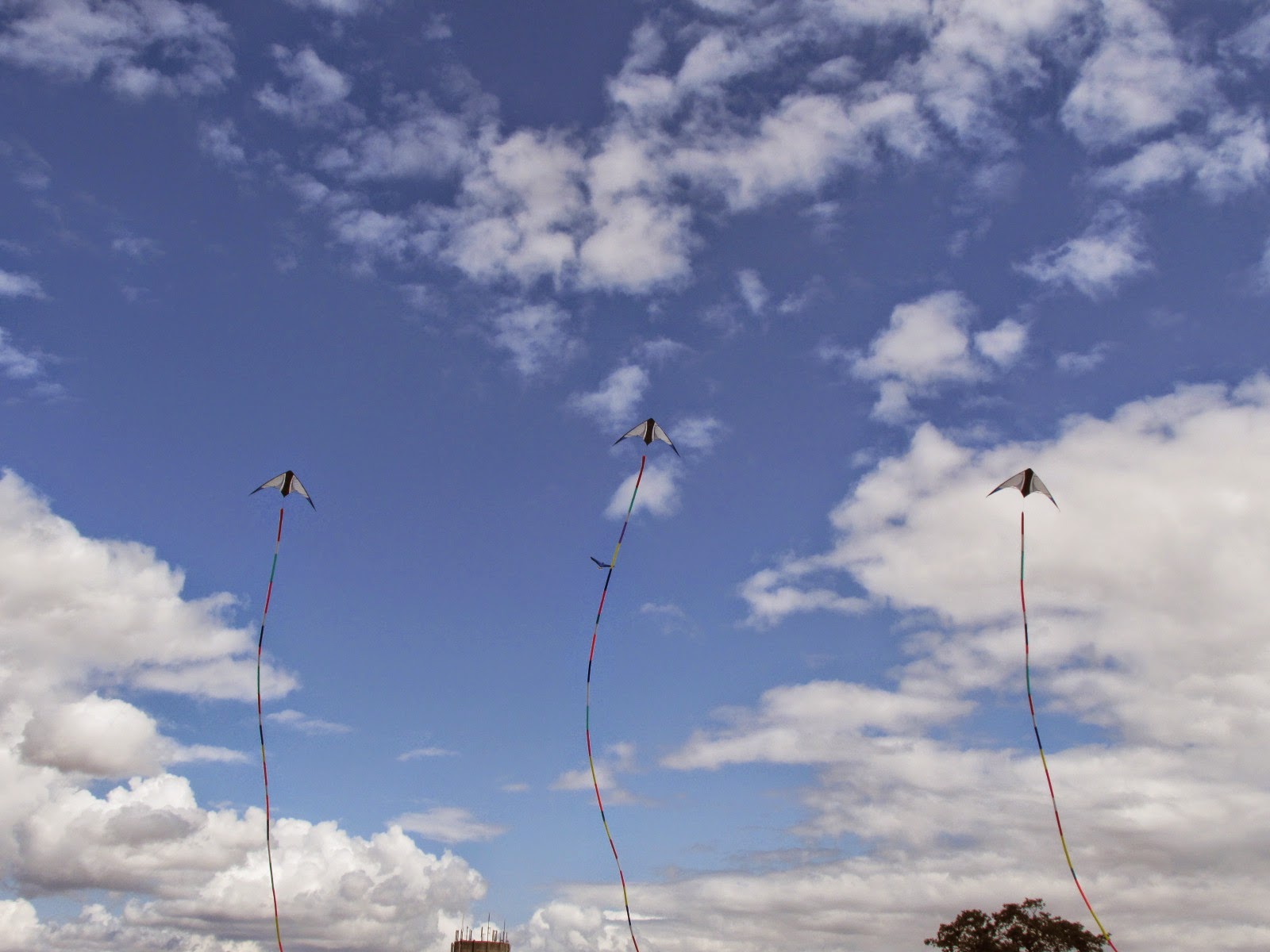 Various single-line flyers were present of course, among which our fellow countrymen, the Sky-Flyers; more photos can be found here.

A highlight of the festival for us was meeting up with the Peter Powell gang, including 'the man' himself. Mark gave us the chance to fly a triple-stack of their new ultralight version; lots of fun to fly! 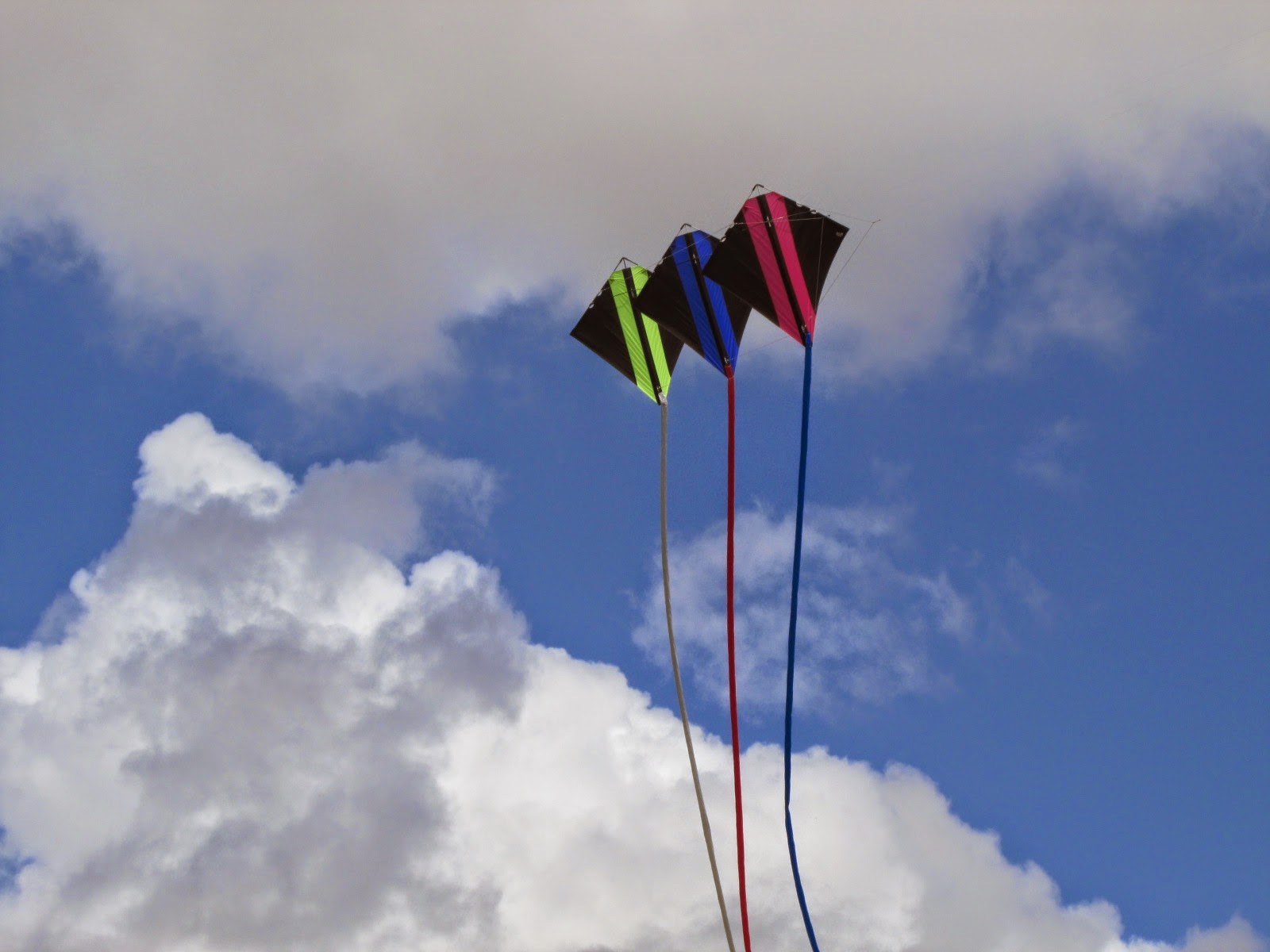 They then tried very hard to convince us that it would look great for Flying Fish to fly a routine with a pair of these stacks ... hm, it sure would, so maybe we'll get a pair of these ultralight stacks one day. Please don't tell anyone, especially not the Peter Powell boys, but I've already played around a bit with sail design, and Mark said he would soon be able to supply silver-coloured tails, which will look great with the sun shining on them ... 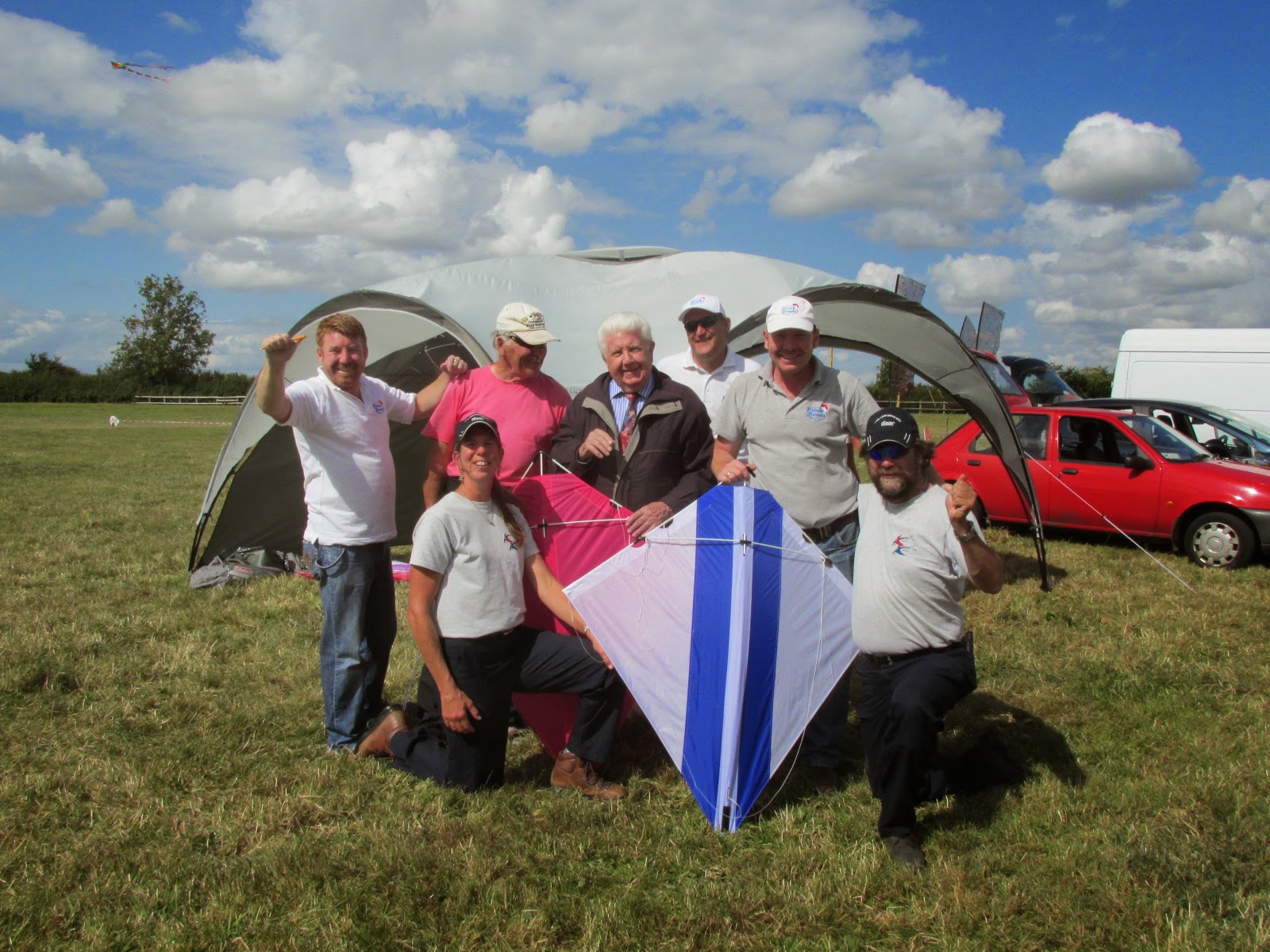 From Flying Fish, Dave Green, and the Peter Powell bunch: hello from Malmesbury!

Posted by flyingfish at 17:49 No comments: