About two years ago, I blogged about us getting an Elliott Mystic. With a wing span of 4.20m, it's most definitely the largest kite in our quiver, and I did then express the bonkers idea of trying to find a second Mystic, and fly them as a pair ....

Well, I never managed to find a second one (but am still keeping my eyes and ears peeled should one pop up), but the idea of having a pair of kites with a significantly larger wing span than the 2.40-2.45m that we normally fly with remained in the back of my mind.

And then I bumped into a mention of a Wanjia/Albatross Firefox .... wing span of 3.38m, which isn't the 4+m of a Mystic, but definitely much more than our usual ~2.45m. Chinese made, comes in several colour schemes, and, also important, is affordable for us. So I ordered two Firefoxes, one green/yellow, one red/orange (they also come in purple/pink and dark blue/light blue). 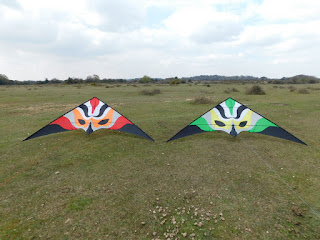 So how do these Firefoxes fly? First of all, they don't need much wind to take off and fly; 5-6mph is already enough. Obviously, as the wind increases, so does their pull; they're big kites after all. 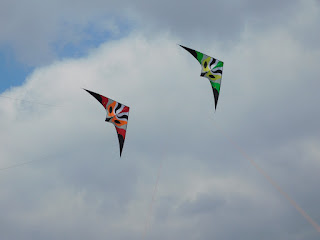 They track pretty well; very little over- or understeer. Corners are reasonable crisp, but being a big kite, they need big input; that took some getting used to. Axels and half-axels are possible, but, again, they need a quite big differential between your arms to make them turn round. General flight is slow and serene.

Clearly, we didn't get them for competition flying, but purely as something 'different' to fly at the occasional festival. I do like the sail pattern, and their bright colours definitely look good in the sky. 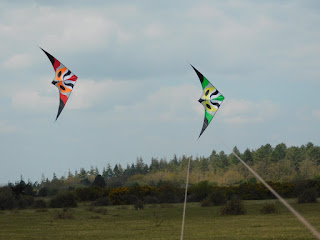 I did say their flight was 'serene', didn't I? Well, in one aspect, they're anything but serene ... the noise they make puts a North Shore Radical to shame. Imagine four or five of these flying together in team formation!
Posted by flyingfish at 15:03 No comments: