If you don't like seeing tails on kites, stop reading and look away now ...

For our 'make it up as we go along' routine to Adiemus, the aim is to fly this routine with tails. Not a routine for the UK nationals, but purely for festivals. Tails on kites are popular with the public, as they add to the spectacle. Obviously, we'd like to able to fly this routine in a wide range of wind conditions, and whereas flying tails in stronger winds is not really an issue, flying them in very light wind is, as tails add weight and drag to the kites. 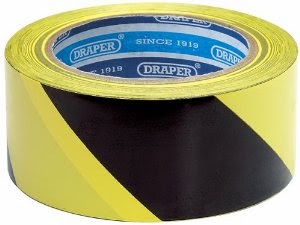 With this is mind, I've been looking around for something that could serve as ultralight tails, and I think I've found this in a humble roll of hazard tape. And I mean the cheapest stuff, as that's usually the lightest. Got a 500m roll from amazon for next to nothing, and cut off 30m of it. And then I cut this strip of 30m hazard tape lengthwise to create two narrow 30m ultralight tails. Piece of dacron added for strengthening at the kite end, so it can be attached to the kite without tearing immediately.

Something that seems to work on paper may not work in real life, so once the tails were ready, we obviously needed to test them out in the flying field. And we felt the perfect kites for this would be our pair of Fire Darts. These kites are essentially ultralights, and the thin tails would be a good visual match for the strong lines of the kites. 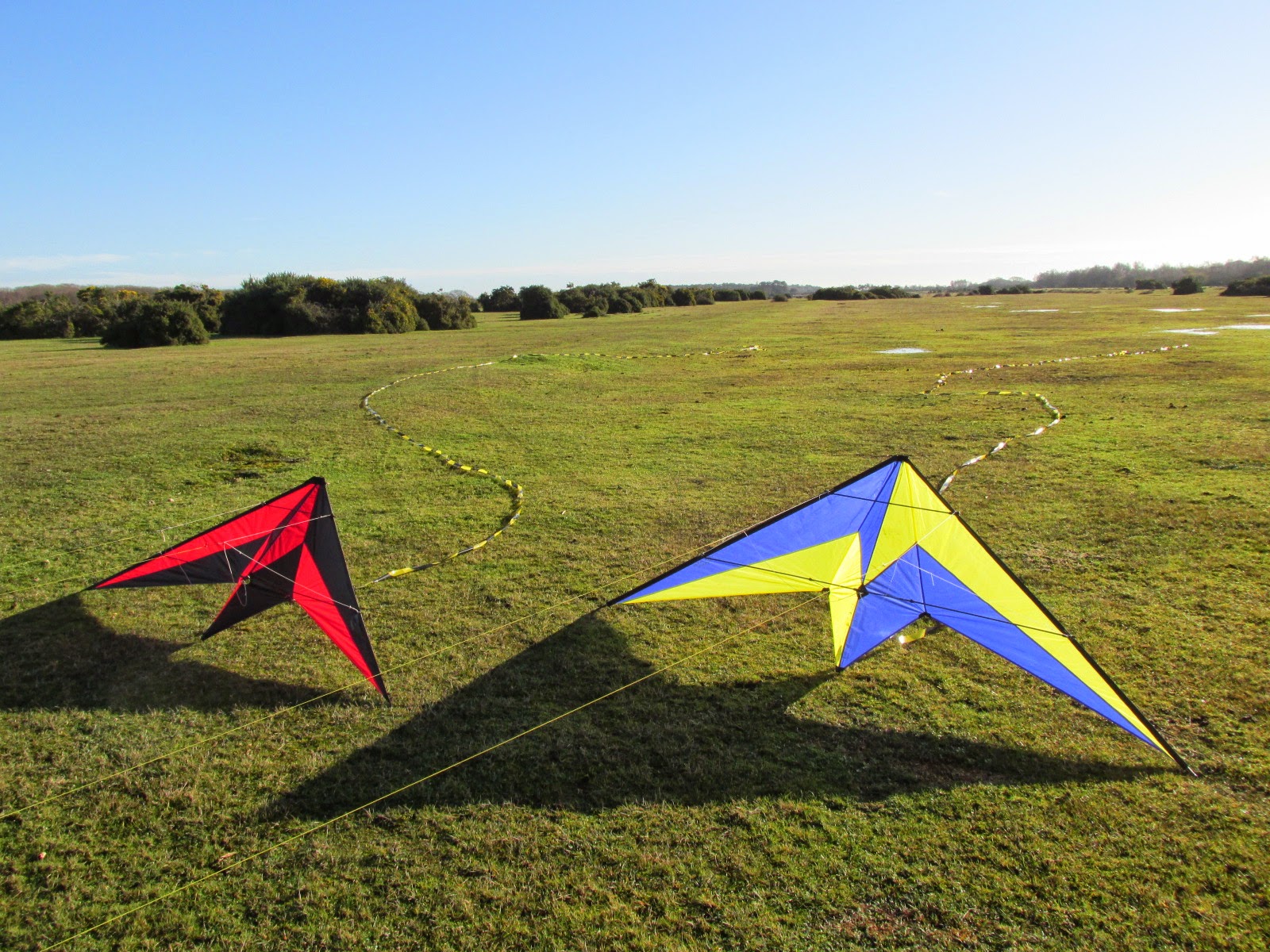 Well, I must say they worked an absolute treat! Even when the wind dropped down to 3-4mph, the kites had no difficulty flying the tails. As the tails are so light, they only come down slowly, so the 'after effect' after a couple of loops lasts quite some time. 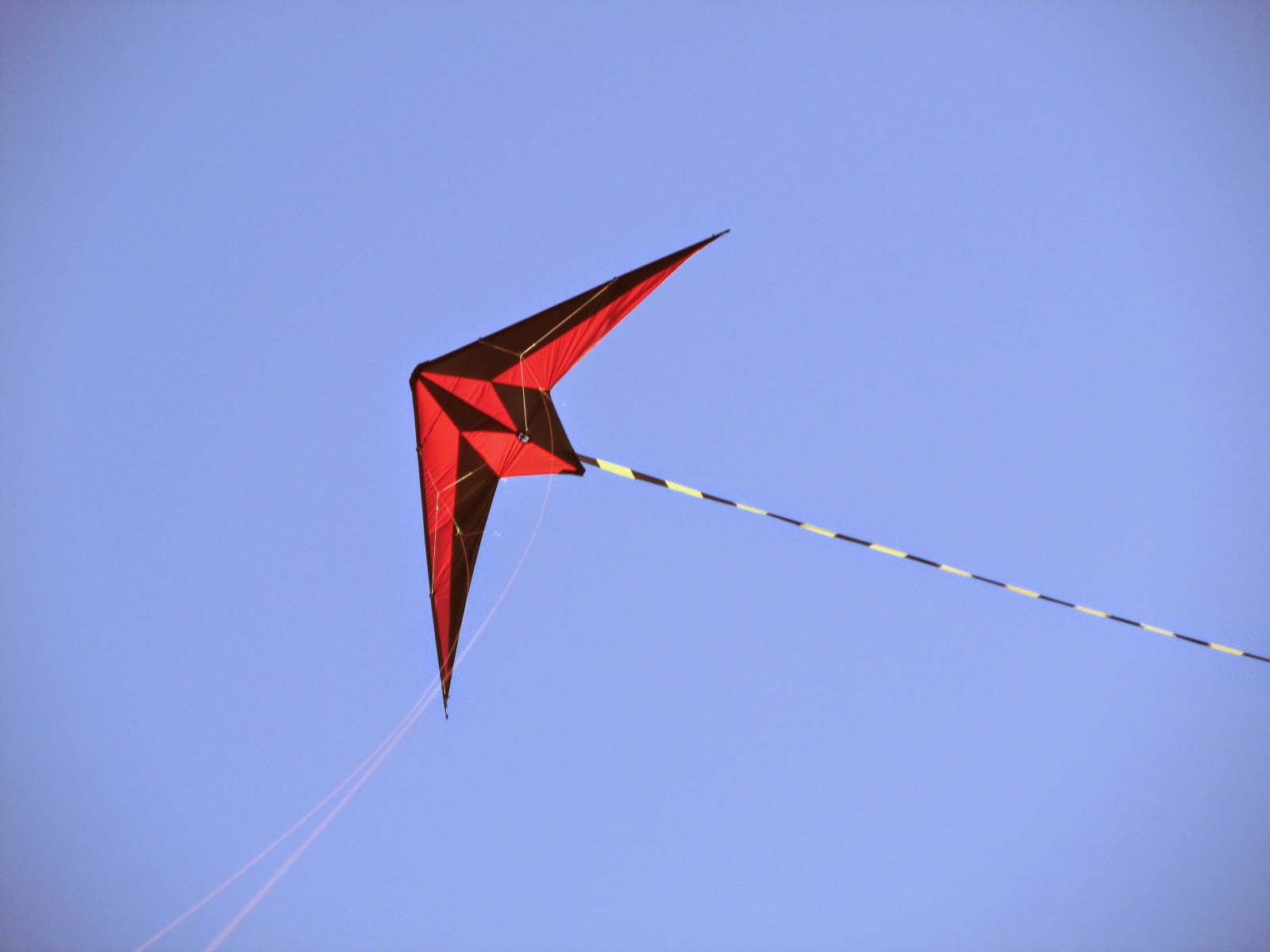 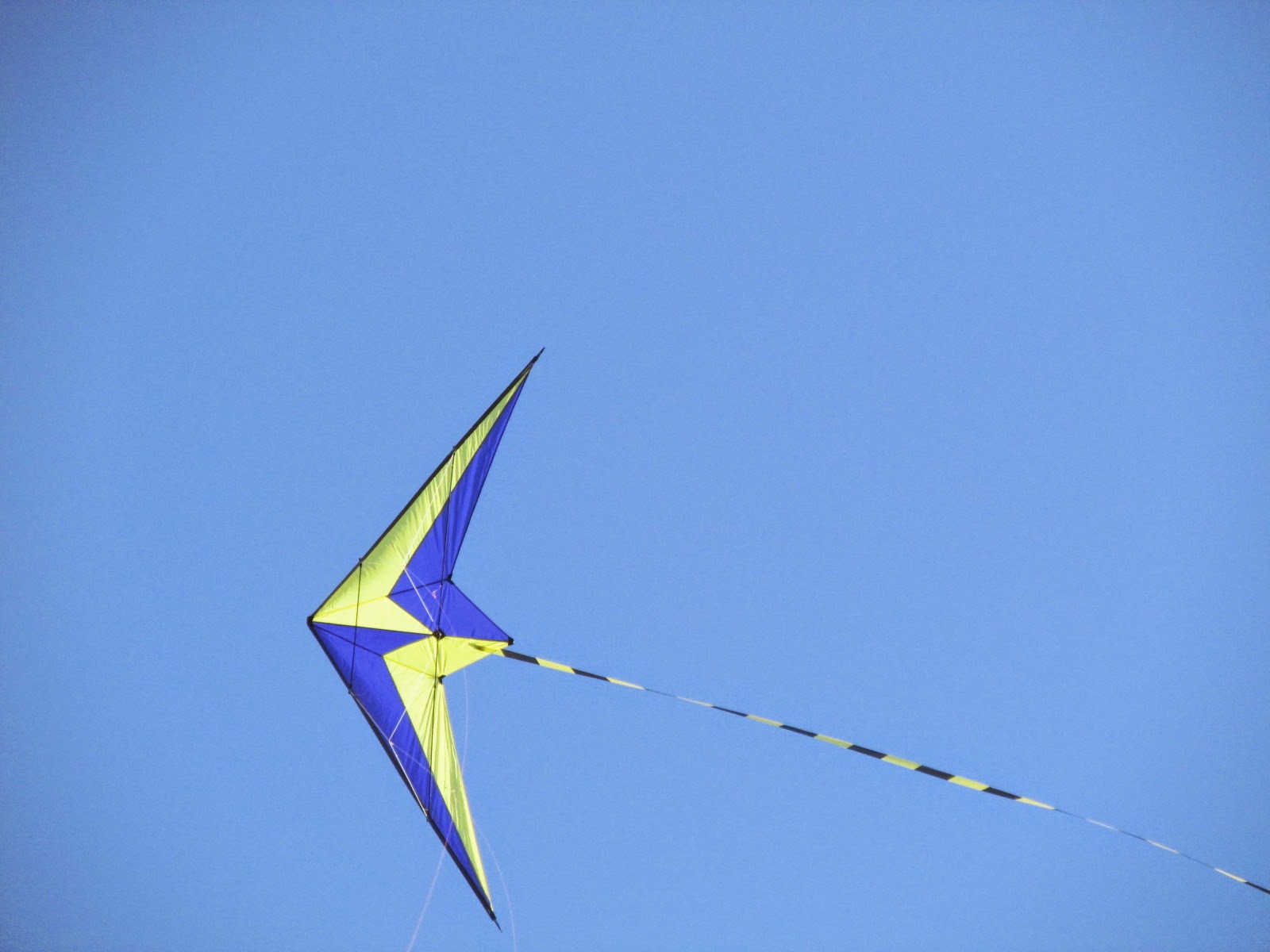 The narrow tails indeed work really well visually and also colour wise: the black from the hazard tape matches the black of the red/black Fire Dart that Irma usually flies, and the yellow from the tape matches the yellow of the blue/yellow Fire Dart that is my usual kite. I don't expect the tails to last forever, as they'll probably tear quite easily. But we got another 470-odd meters left on the roll, so .... 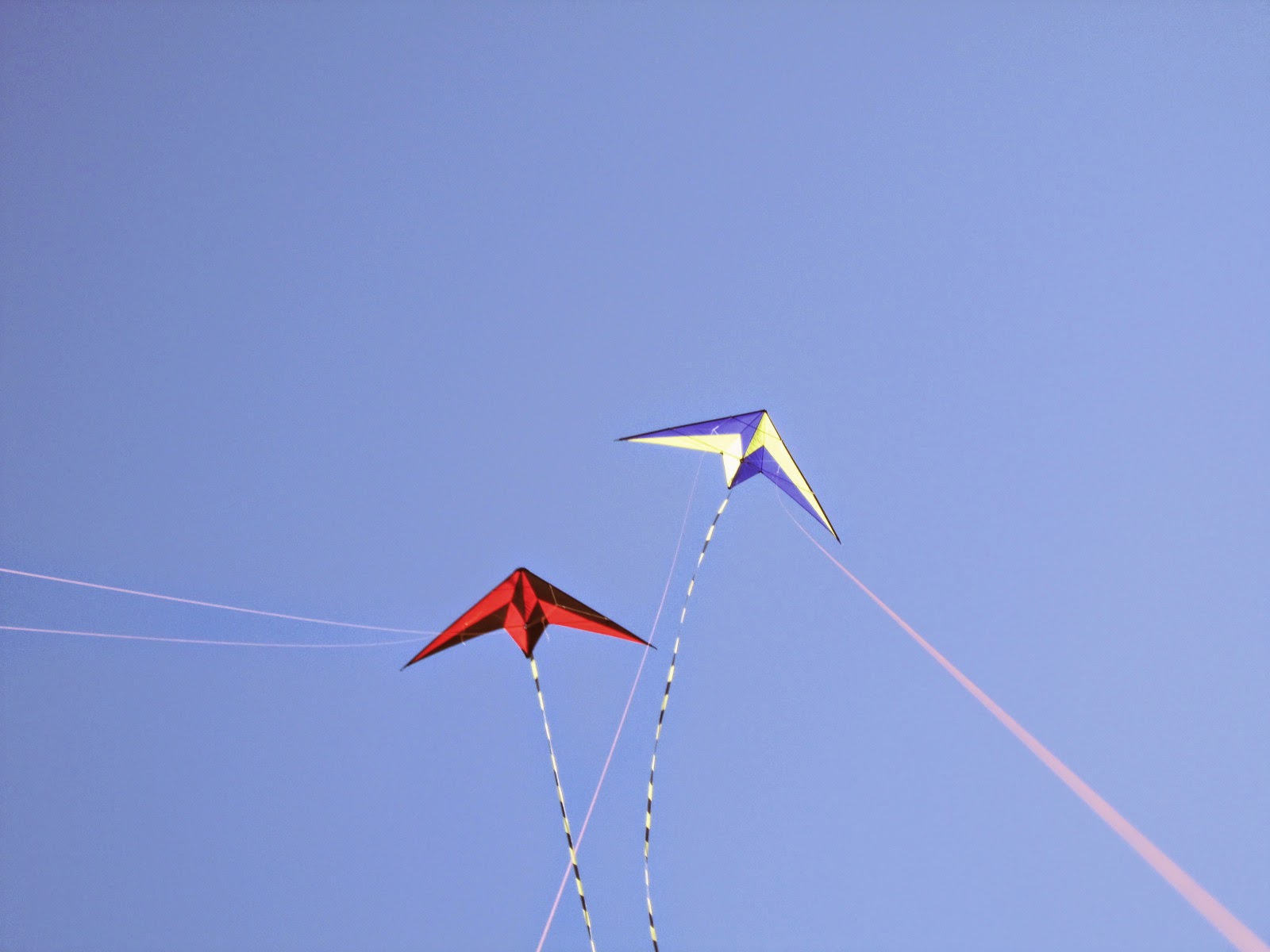 So, coming to a festival near you: a pair of ultralight tails!

Posted by flyingfish at 16:24 No comments:

Some time ago, I wrote about my plans to recreate the Air-o-bian kite from the 1930s. If you've been following me on Facebook, you'll know this project has been progressing steadily. I guess it's time now to tell you the full story.

Stage 1 of the project was to try and recreate an Air-o-bian kite as close as possible to the original patent: 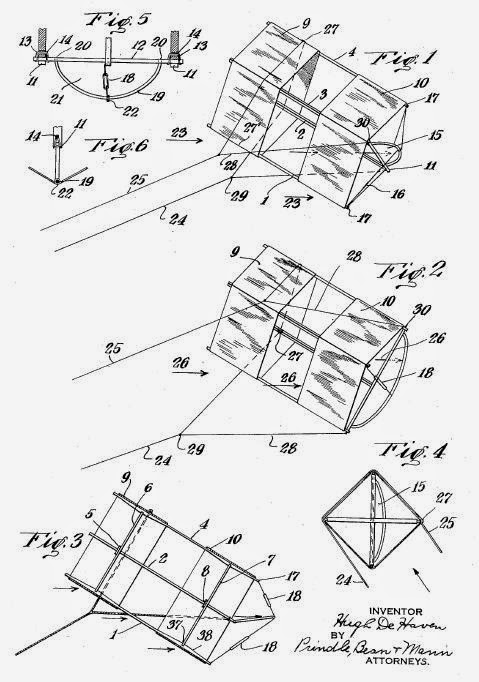 To achieve that, I got myself a pair of Spirit of Air box kites (the idea was to end up with a pair of Air-o-bians, so we could fly them as Flying Fish). I created a rudder from a plastic storage box, and mounted that on a 5.5mm carbon tube, inside which was a 3mm carbon rod. 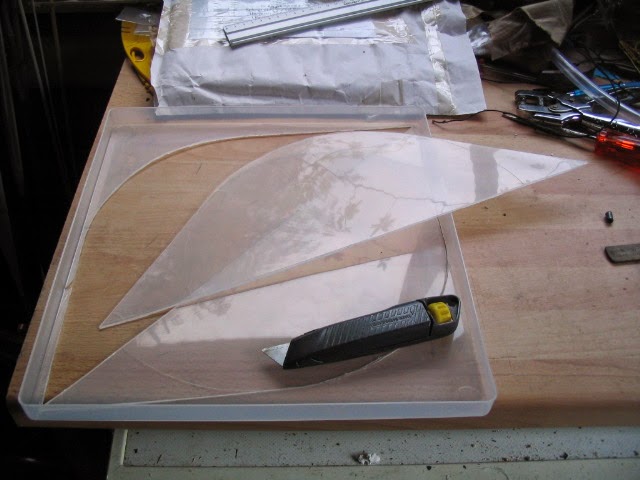 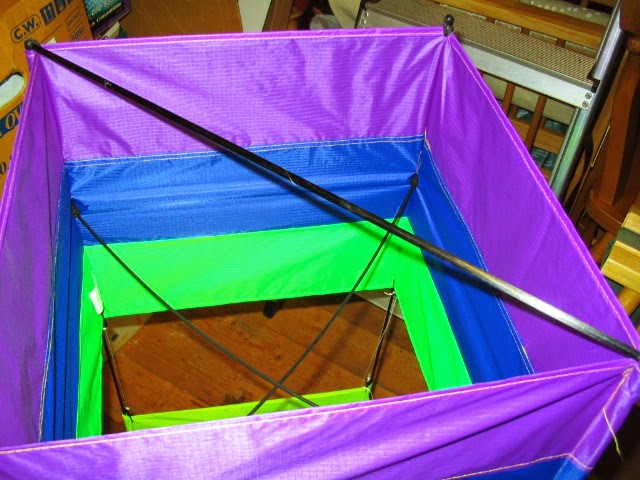 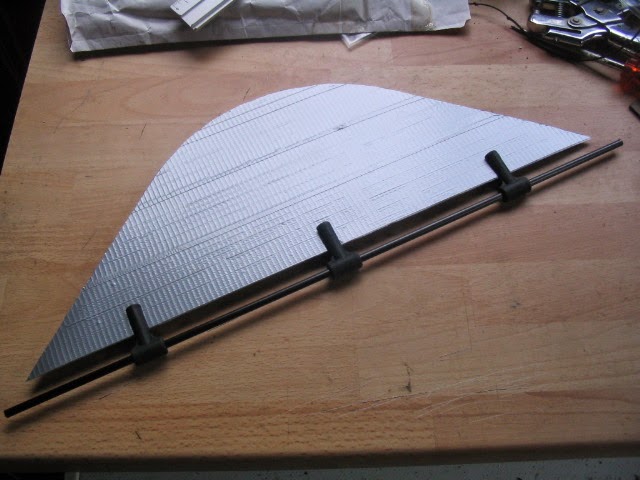 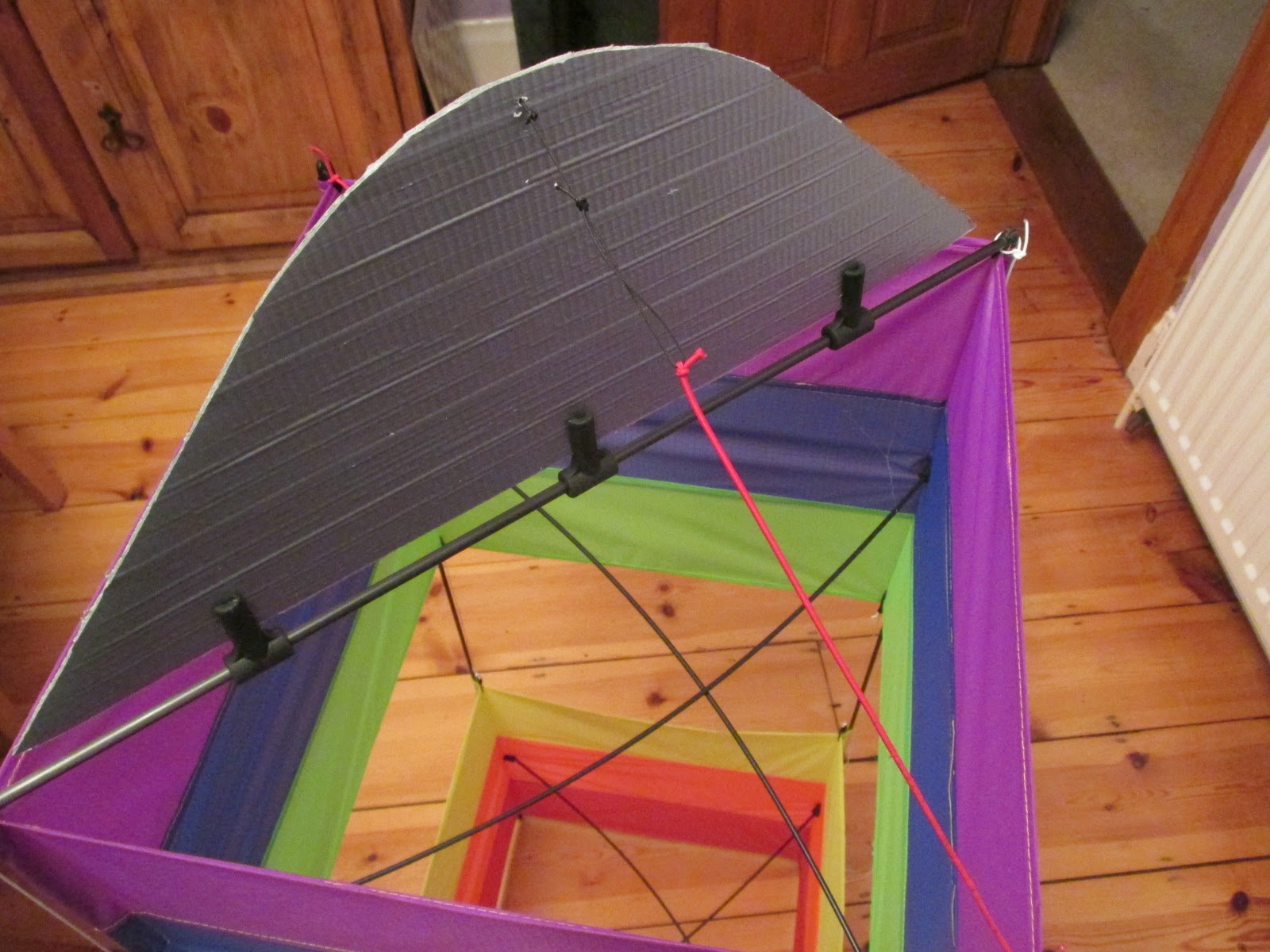 Note that, according to the patent, the rudder is not connected to the bridle lines, but is connected to the upright spars with a piece of elastic. Kite was bridled, and we were ready for the first test flight! 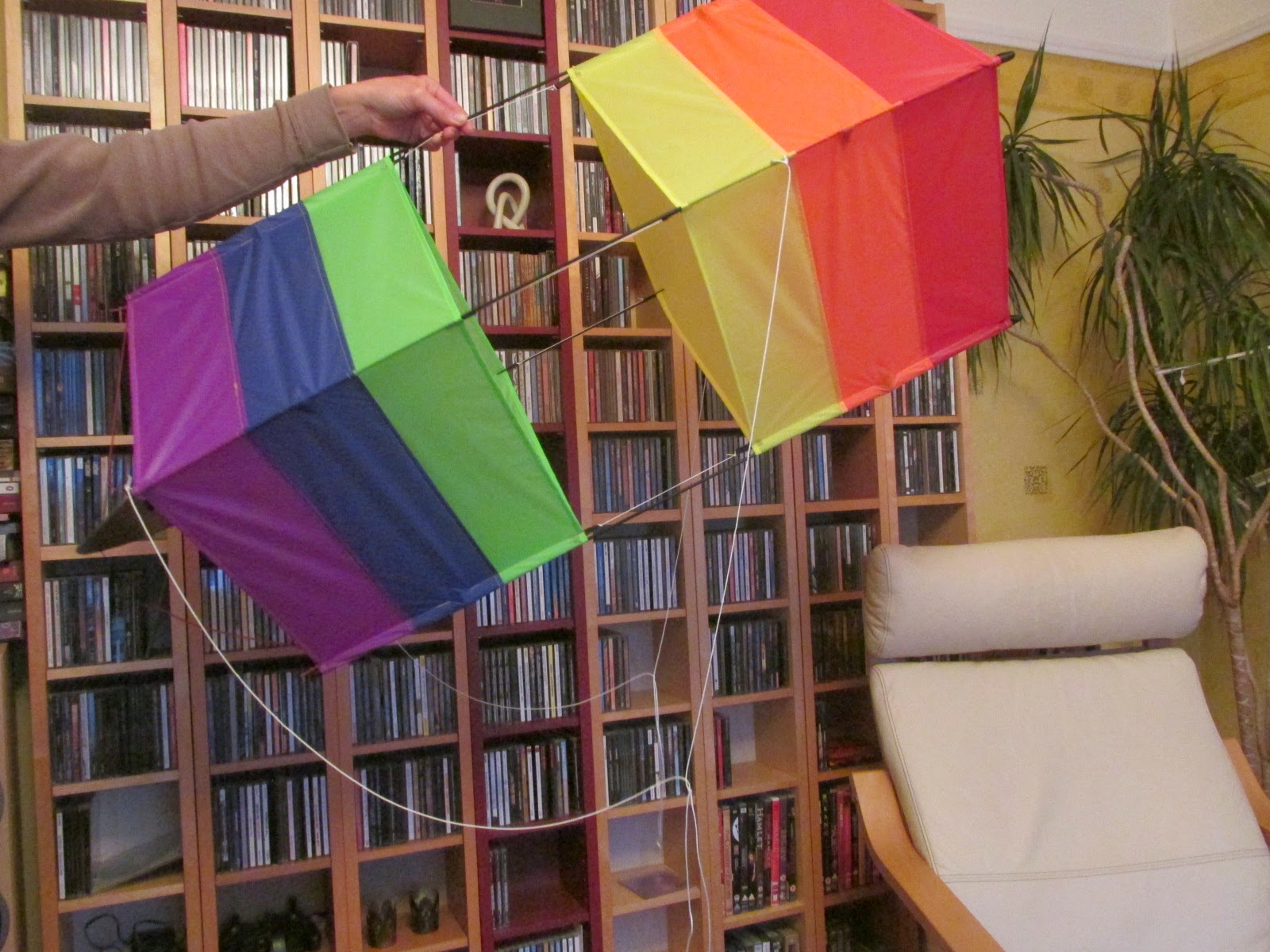 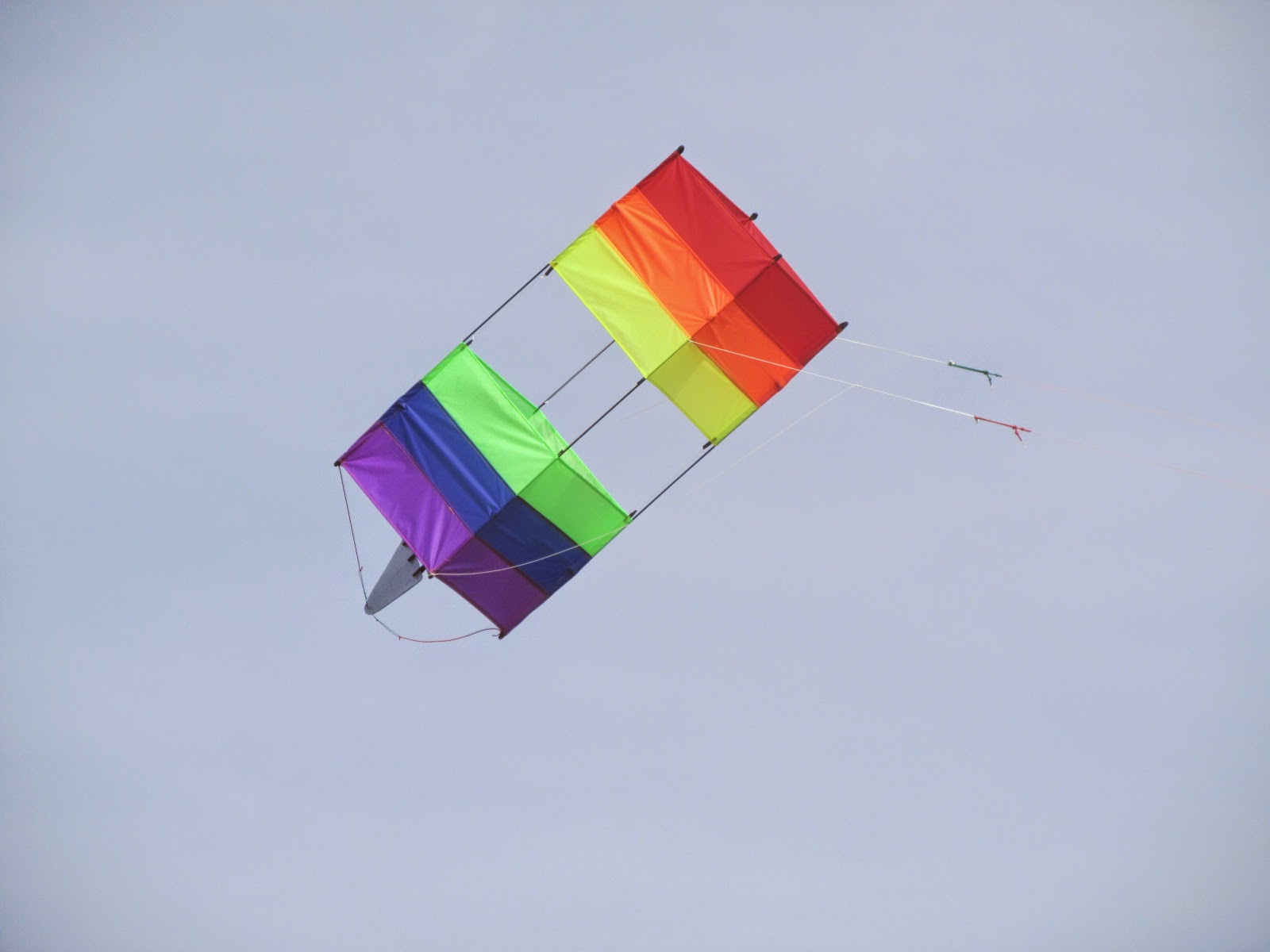 The rudder basically didn't do anything, and any attempt at pulling one line or the other merely resulted in the kite rotating around its longitudinal axis, but not moving into the direction of the pulled line.

To be perfectly honest, I would have been surprised to see the kite steer, as the rudder wasn't controlled by the bridle lines, or by anything else for that matter! So on to stage 2 ...

For stage 2, I decided to move away from the original patent, and link the bridle lines directly to the rudder. This way, the rudder would move as the lines were being pulled. I decided to use the second box kite I had for this, and leave the other kite as it was. If it worked, I could simply adapt that one. 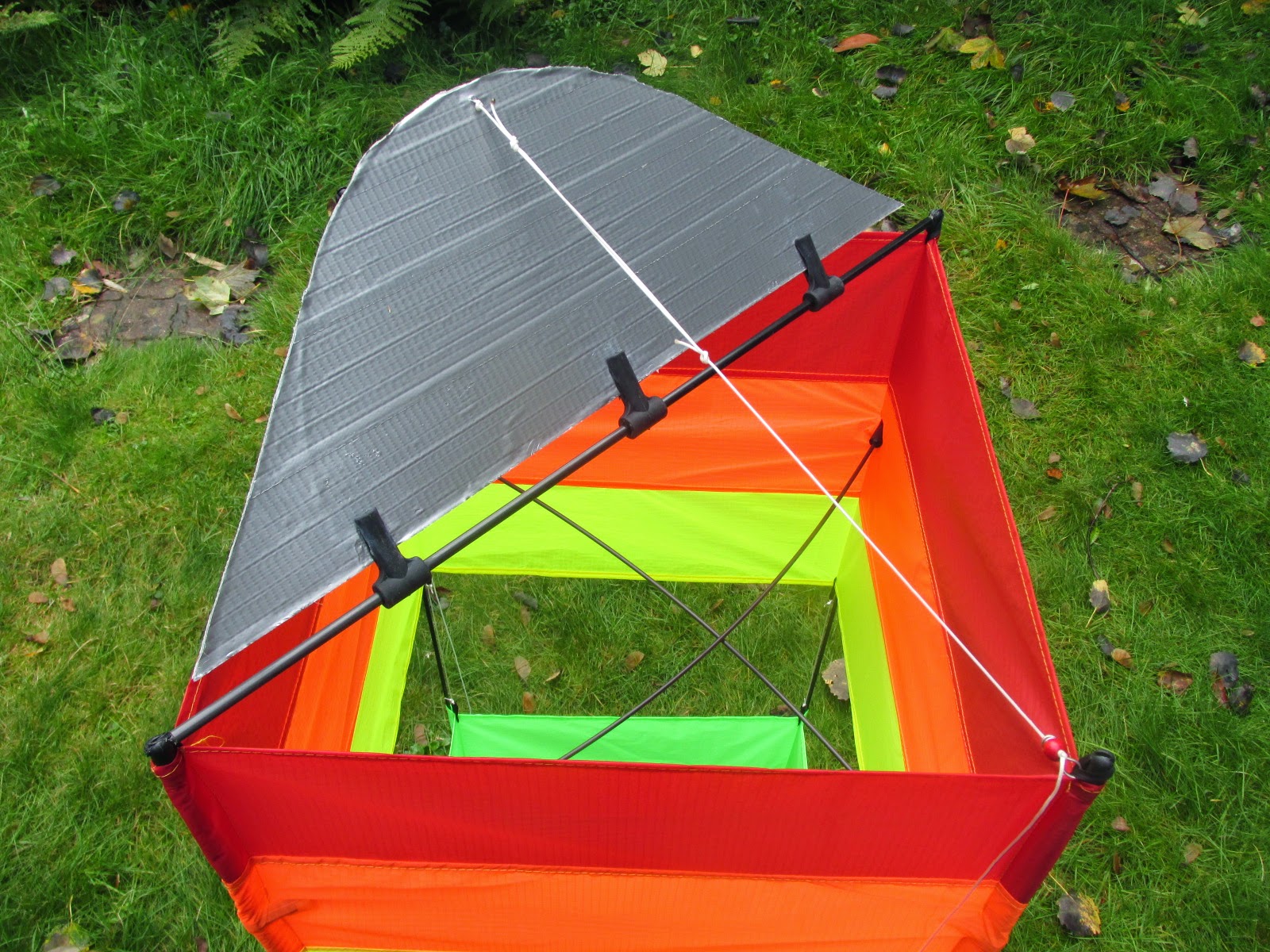 Test flight number 2 showed this direct rudder control had no effect whatsoever! It still was the case that pulling on either line resulted in the kite rotating rather than steering in a particular direction.

Now I was still following the patent regarding the attachment points of the 'uphaul' part of the bridle, i.e. on the lateral upright spars as you face the kite. What about making the two 'uphauls' attach together on the flyer-facing upright spar? I know I'm moving further and further from the patent, but I just wanted the box kite to steer ...

So here's what the improved bridling looks like. At the lower (rudder) end of the kite, the bridle lines connect directly to the two sides of the rudder; pulling on one line will make the rudder go one way, pull on the other, and it goes the other way. 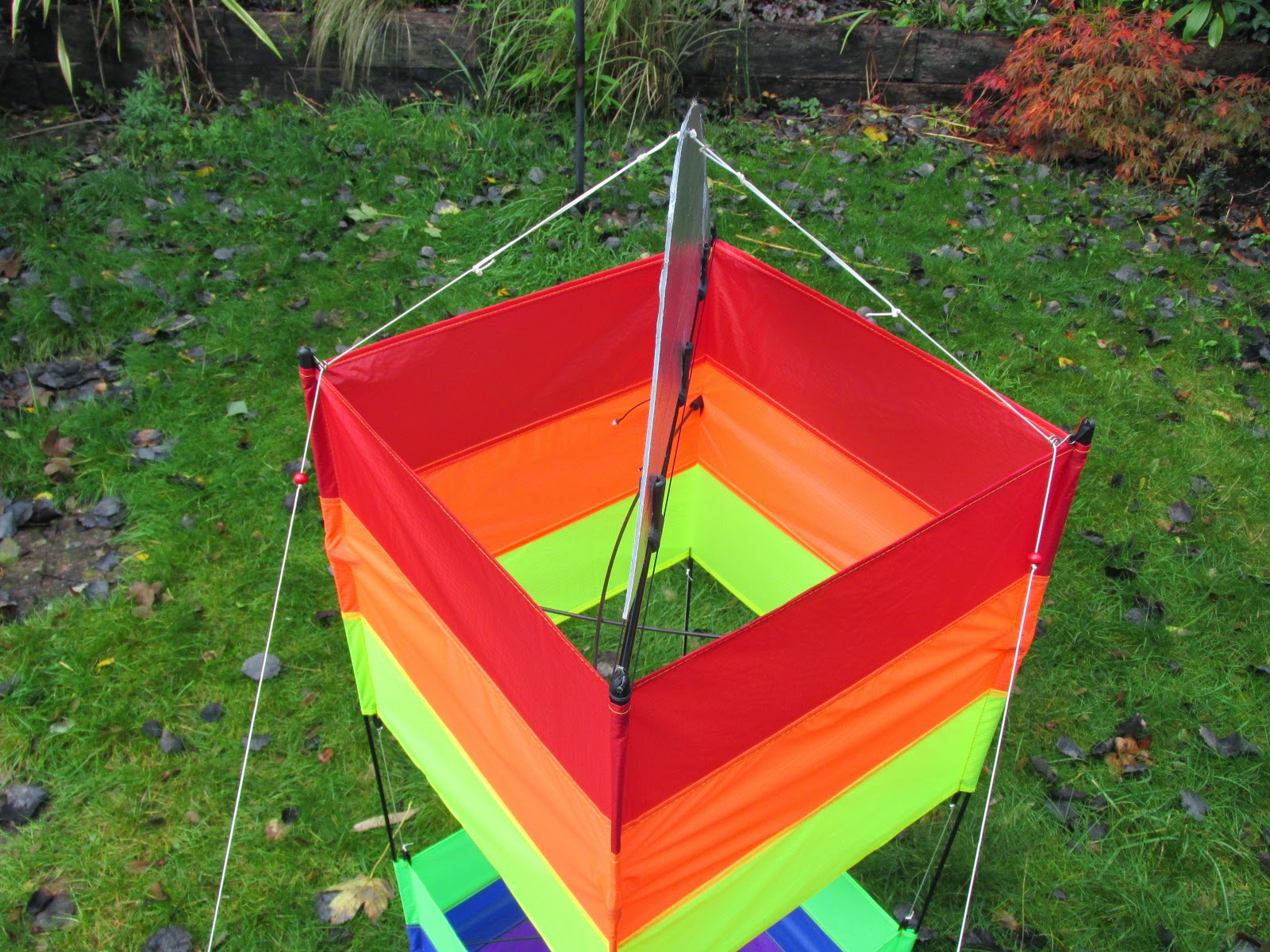 And at the top end of the kite, the two 'uphauls' come together on a single spar; that ought to reduce the rotation of the kite, as all pulling will now only go to the rudder. 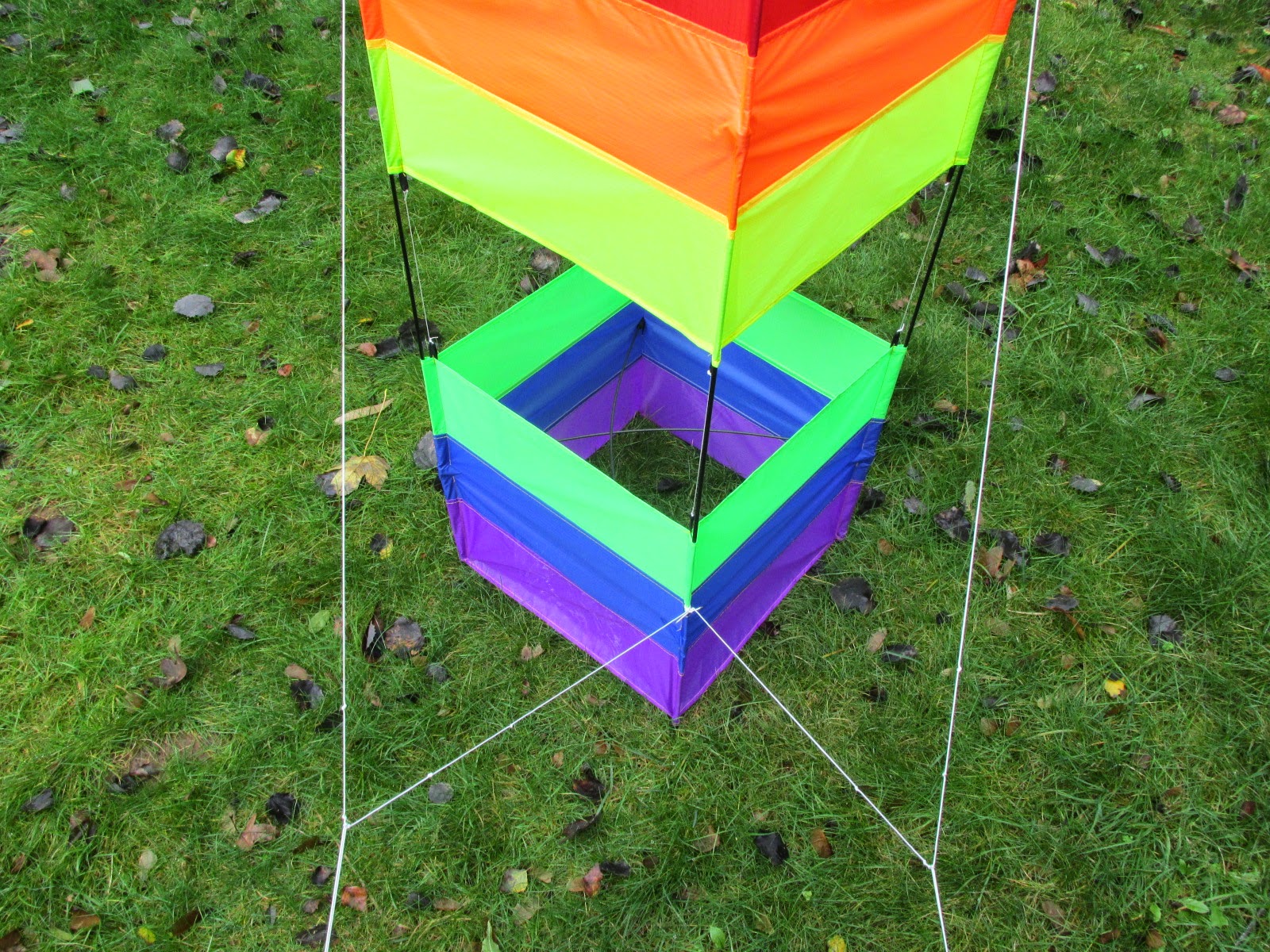 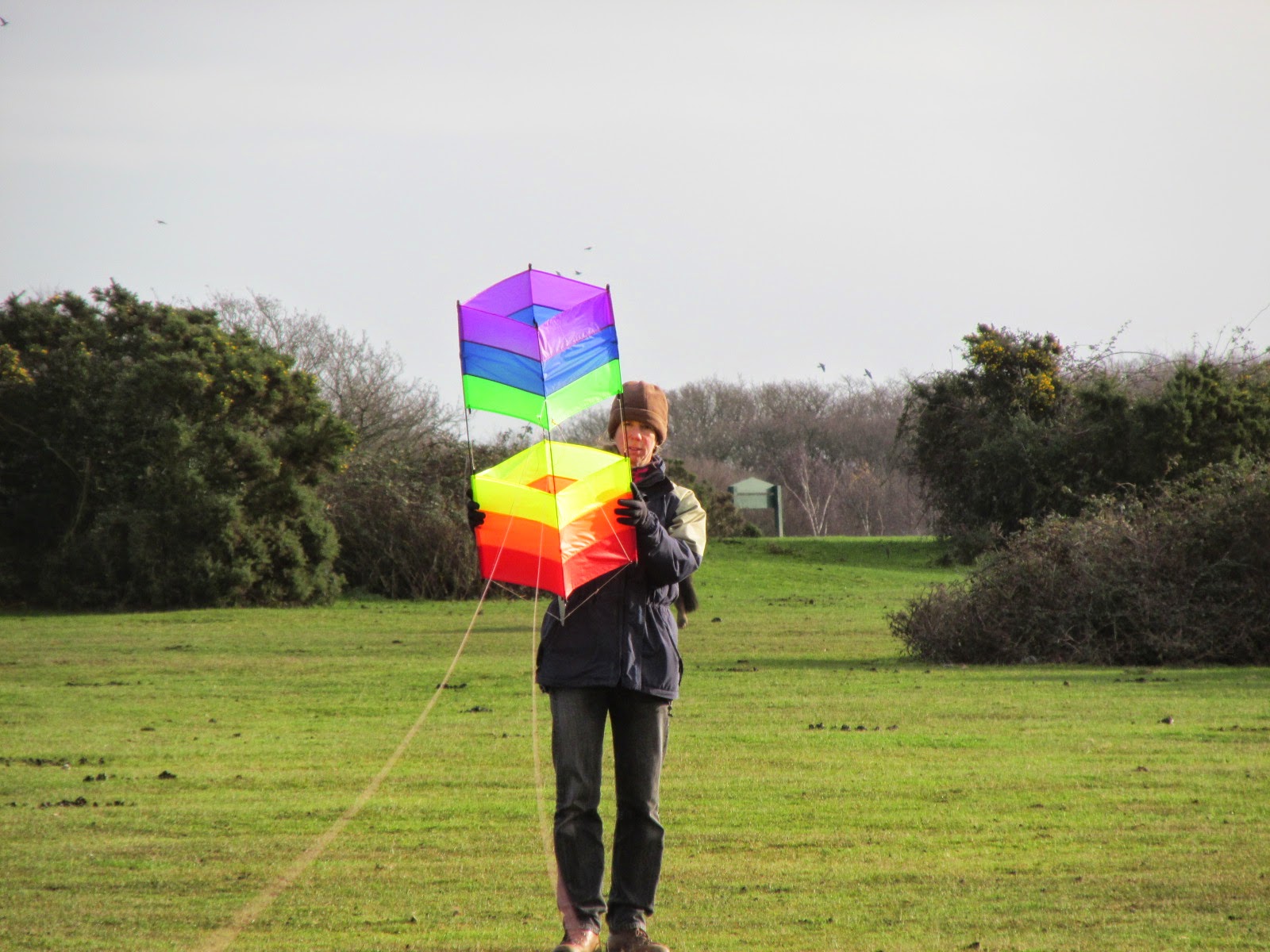 Well, yes, actually! After getting used to the kite flying to and fro a lot, I actually managed to fly it into loops left and right! 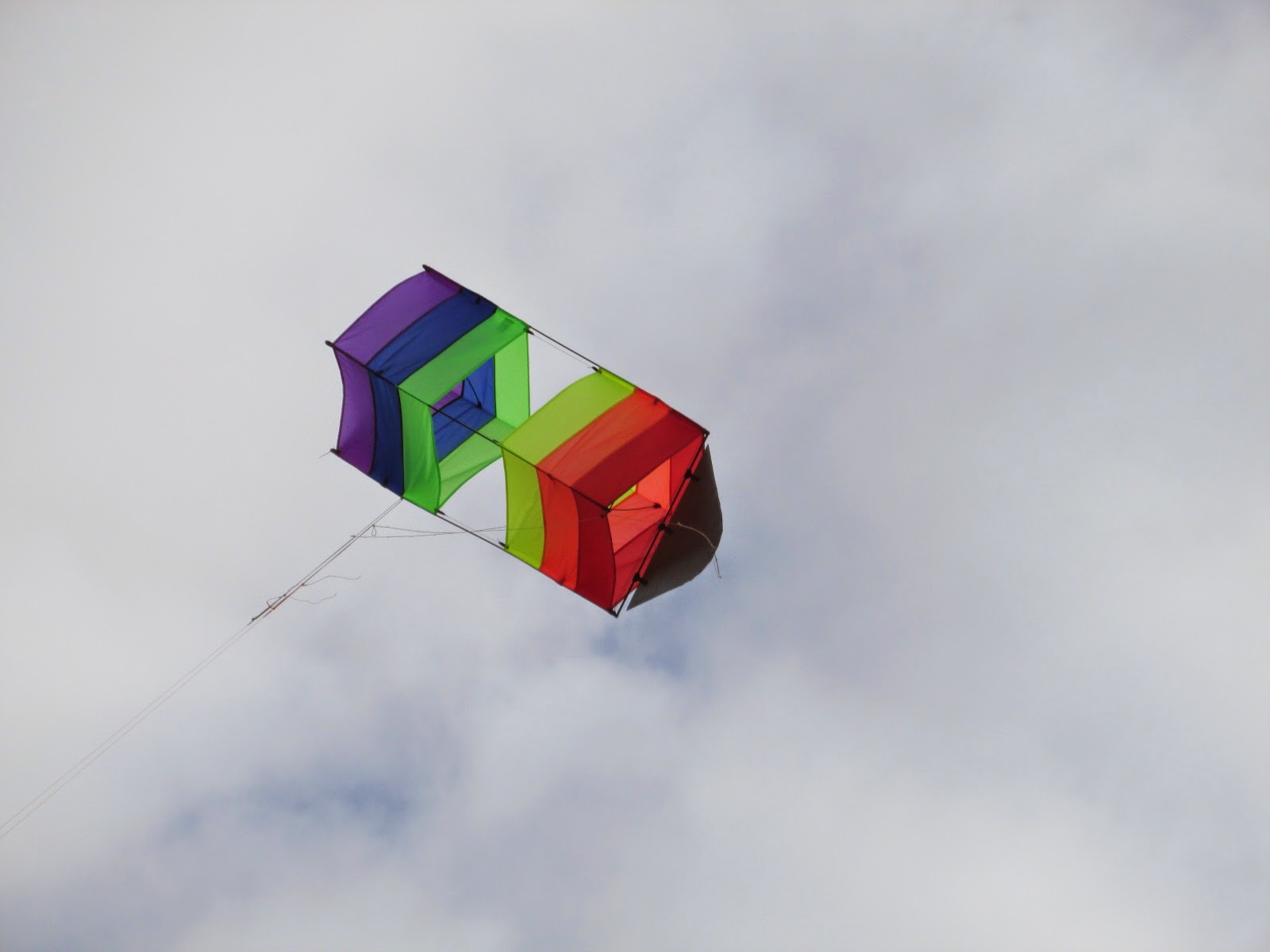 It turned out that the position of the tow point was pretty crucial. Too low down, and the kite wouldn't have enough angle to fly; too high up, and the bridle lines connected to the rudder would remain slack, and it wouldn't steer at all. But a bit of trial and error seemed to give me the sweet spot.

Even though I managed to steer the kite in the end, control is not even close to what we would need to fly two of them side-by-side, so it'll remain a one-off for now (unless I get a sudden brainwave as to how to improve control massively).

So here's our "Spirit of Air-o-bian"! The name is a nod to the maker of the original box kite, and to the fact that that the end result has the 'spirit' of the original Air-o-bian in it, even though I've veered further and further away from the patent. It definitely was a fun experiment!
Posted by flyingfish at 20:27 2 comments: