If you mention the name 'Dunford' to a kite enthusiast, he or she will surely think of his Flying Machine. Much less well-known is the fact that Don Dunford designed more kites besides the Flying Machine: the Stingray and related kites. This 'family' of kites consists of three: the basic Stingray, the Oxray (an improved version of the Stingray) and the Skyblade (a larger, multi-coloured Oxray). Being interested in the early history of dual-line kites, of course I've been keeping my eyes peeled for these kites, and the Oxray turns out to be like buses: don't see one for ages, and then two pop up ...

One of these two was a present from Bill Souten / MKF, the other one came straight from the original source, as Cochranes of Oxford still had a few in their warehouses (before you ask: yes, they also had a basic Stingray and a Skyblade!). 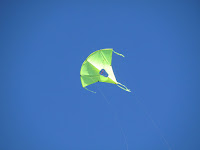 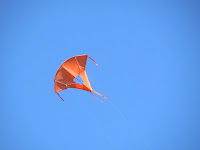 Oxrays are small kites (99 cm wing span) and are fun and easy kites to fly, but do need constant wind pressure on the sail, 10-12mph is ideal. This means they don't like stalling or flying at the edge of the wind window. But they can really turn on a dime, though! 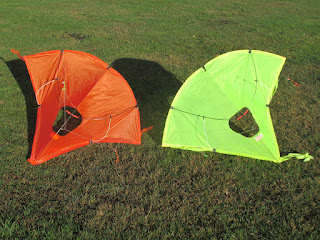 Having two of them means we have to fly them as a pair, of course. 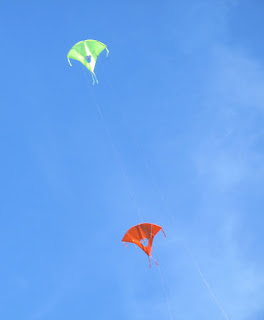 Flying them side by side shows they're not exactly the best precision kites. They're very sensitive to input so difficult to get them to track well. We took them through a series of official STACK figures, and I don't think we would have scored high for any of them .... Still, we had fun flying them together, and I don't think there are many kite teams in the world who have a pair of Dunford Oxrays in their quiver!
Posted by flyingfish at 15:54 No comments:

Flying Fish is and firmly remains a dual-line pair, but that doesn't mean we don't look at kites with fewer or more than two lines, especially if they're a bit fishy ...

Talking of fishy kites, for a long time I've been aware of a pair of fish-shaped fighter kites, designed by Joel Scholz. They're called 'Piranha' and 'Piranha Bait', and as they're no longer produced, getting my hands on a pair of these proved to be a real challenge. Fortunately, perseverance paid off, and thanks to a kind soul on the Gone with the Wind forum, Flying Fish now has a pair of 'Piranha' and 'Piranha Bait' fighter kites! 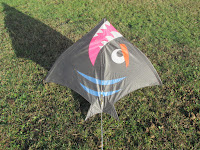 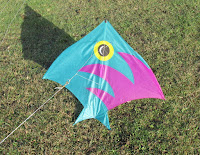 Their maiden flight was in a quite strong and blustery wind, which didn't make flying them easy. We'd be the first to admit that our skills in flying fighter kites isn't anywhere near our dual-line flying, but we did get them to fly.

And they weren't easy to photograph either ... plenty of pictures showing a clear blue sky with not a kite in sight!

Posted by flyingfish at 16:11 No comments: