Flying Fish and L-katz are scheduled to fly at Brighton Kite Festival, but unfortunately, Tony can't make it that weekend, so we have to adapt our 4-(wo)man L-katz routine to a 3-(wo)man one. 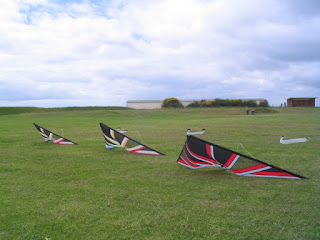 Changing the patterns from 4-kite to 3-kite patterns isn't difficult in itself most of the time, but when flying those adapted patterns, people may have to flank left when they're used to flanking right, or may find themselves flying in a position they're not used to. When calling, I try to warn people ahead of time that a pattern comes up where one or more have to do 'something else', but it does take some practice and some 'getting used to'.

So here's our very first practice run with the adapted L-katz routine, and flown with strong (25-30mph) winds. Warts and all!


Yes, we made a few mistakes, but we got out of them quickly again, and for a first time, it wasn't too bad. Especially considering the wind. So we're pretty confident we'll be ok by the time we go to Brighton in a few weeks time.

Video credit: Roger Backhouse
Posted by flyingfish at 15:56 No comments:

Last year, the web-site of STACK got hacked, but Barry et al have managed to get a new STACK web-site established. As the site is still under development, some areas still lack content, but I'm sure that'll be remedied pretty soon.

And don't forget that STACK also has a Facebook page.
Posted by flyingfish at 20:15 No comments:

Back to home grass, back to where we had our festival debut last year. This year's Southampton Kite Festival really was a festival of two halves, yet again! On Saturday, the wind was extremely erratic: gusting up to well over 25mph, full of holes, and often dropping away unpredictably. Sunday saw very light (1-8mph) and relatively smooth winds. Some showers on Saturday, and drizzle on Sunday morning completed the weather picture.

As to us flying our pair and team routines, as far as I'm aware, there are no pictures, so you just have to do with a picture of Irma warming up with one of our North Shore VIP kites, testing the wind before the start of the festival. 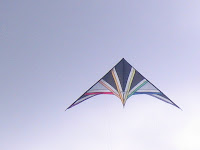 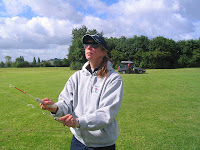 As Flying Fish, we flew our mega-vented Matrix kites on Saturday and, despite the unpredictable and gusty winds (it dropped half a minute into our routine), we pulled it off. On Sunday, flying our Airdynamics T5 Taipan SUL kites, we flew what we regard as the best routine we've ever flown at a festival! Admittedly, not as good as the one we flew during our dress rehearsals, but pretty close, so we were well-chuffed.

Wings on Strings had to switch to unfamiliar kites at the very last moment on Saturday, and still managed to keep it together under really difficult conditions; they couldn't fly on Sunday.

With L-katz, we managed to deal with the challenging conditions on Saturday, flying our North Shore VIPs. On Sunday, with our Airdynamics T5 Taipan SULs, we flew a lot better.

Very happy to get good comments and compliments on our pair and team flying from Barry and Fran, two members of Team Flame!

Which brings me to the other teams flying at the festival, showing us we still have a lot to learn ...

The Ex-Grads (Keith and Vee) were present on Saturday, and flew several routines with their Airdynamics T5 Taipan V2s: 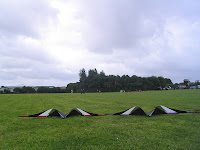 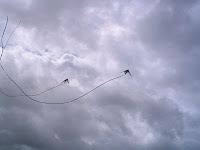 Team Flame in its full line-up was present on Sunday (Barry and Fran were present the entire weekend), and also flew several routines with their Fury kites: 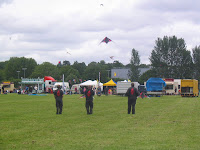 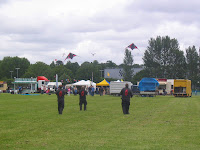 I have to single out their final routine, though ... during a choreographed landing halfway into the routine, one lower spreader came loose on one kite, and another kite suffered a broken leading edge. Did it bother them? Of course not, and the vast majority of the public will not even have noticed that they flew with two damaged kites. They're not the reigning UK Champions for nothing ... 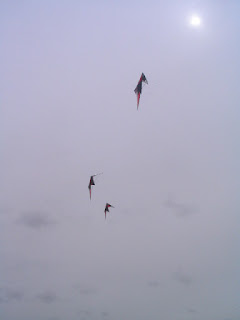 You can't fly at a festival where Barry is also flying and then not join in at least one mega-fly. So L-katz joined in with the other teams in several mega-flys over the weekend, with up to 9 kites in the sky. Always exhilarating!!

Few more pictures of the festival are here; keep in mind I didn't have much time to take pictures, as I was mostly either flying, ground crewing or otherwise engaged in helping run things in the arena.
Posted by flyingfish at 18:52 No comments:

In an earlier blog post on the evolution of dual-line kites, I mentioned wanting to get a pair of Gayla Baby Bats, and converting them to dual-line flying. Well, I got a pair, and I did convert them!

Baby Bats were small cheap plastic single-line delta kites, sold in the US in the 1970s. So, basically, they were contemporary to Peter Powells in Europe. In an article in the Spring 1979 issue of the Kite Lines magazine, Red Braswell (then president of the AKA) describes a method by which Richard Radcliffe rebridled these little kites for dual-line flying, called 'figurekiting' in those days, and a re-bridled Baby Bat won 1st place for two-line kites at the Maryland Kite Festival on April 29, 1978. Clearly, a dual-line kite like that caused a bit of sensation! The Kite Lines issue, where you can read the entire article (on page 46), is here, but the crucial bit is the 'Radcliffe Bridle': 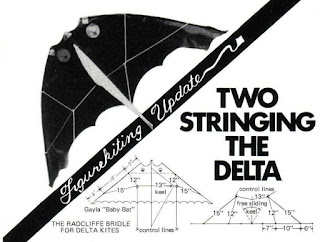 Interested as I am in the history of kites, and especially dual- and quad-line kites, I was keen to try and get my hands on a pair of Gayla Baby Bats, and then try out this 'Radcliffe Conversion'. As you will see on the picture above, it's a rather unusual bridle in that there is a 'cross-leg' connecting the two sides going through the hole meant for attaching the line when flying it as a single-liner.

Getting me grubby hands on the kites took some time, but I was finally successful in getting my hands on a Gayla Baby Bat and a Gayla Sky Spy, both brand new, for $10 each! Shipping from the US cost more than  the kites themselves, but, hey,who cares?

First flew both as single-liners, and they flew exactly as I expected: like cheap little plastic delta kites. 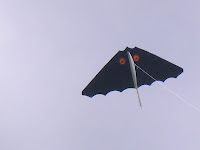 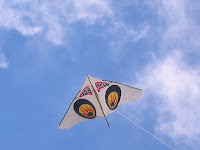 That didn't inspire much confidence that they'd fly halfway decent with two lines, obviously .... Still, I had to try it out! Adding the bridles, and strengthening the leading edges in the process, took maybe an hour and a half, and the moment of truth arrived the next time we were on the flying field ...

To my great surprise, they flew pretty well on two lines!! Much more steerable than I expected, although of course not in the same league as a modern dual-line kite. And they do need a decent wind to keep going: if the wind drops away, they become very difficult to turn. 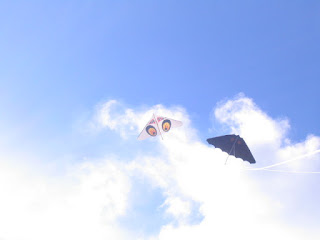 But we managed to let the kites follow each other in infinities, ladders up and down, wraps, and even some boxes. It actually worked so well, that we're even considering flying them to music as a 'quirky' routine one day. And this classic fits the character of the kites really well:

Those of you who had a look at the photos I took at the Basingstoke Kite Festival may have noticed that a third fish windsock has joined the two we already had. Yes, picked one up from eBay recently, for very little, and it was flying from our official Flying Fish pole for the first time at Basingstoke. 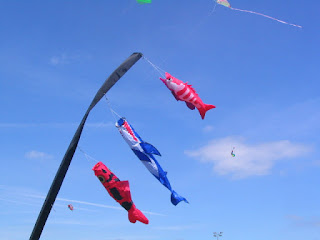 And by the way, this blog has now existed for a year; happy birthday to me!
Posted by flyingfish at 08:25 No comments:

At Basingstoke Kite Festival, we flew with the full line-up: Flying Fish, Wings on Strings, and L-katz. Weather was gorgeous during the entire weekend, but the wind wasn't .... On Saturday, it varied between virtually nothing and 16mph, resulting in kites falling out of the sky during our routines, because someone all of a sudden switched the wind off! On Sunday, the wind was not as gusty, but still liable to drop away completely without warning. Problem with that sort of wind, specially the way it was on Saturday, is that if you take a standard kite that can deal with the 12+mph wind, it'll drop dead when the wind goes down to zero; fly with a (super)ultralight, and it will explode in the gusts. Damned if you do, damned if you don't ... Still, we did what we could!

So here we have Flying Fish during and after their routine: 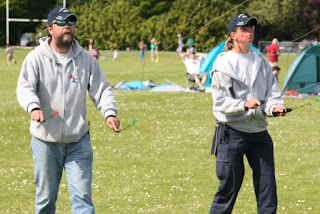 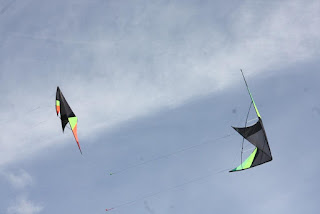 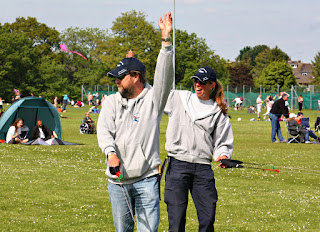 And the same for L-katz: 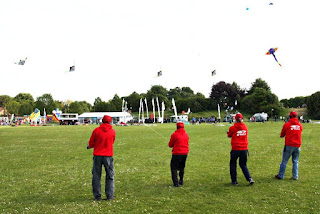 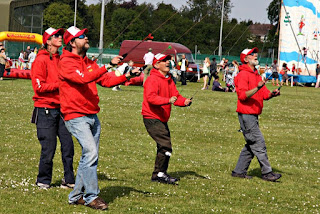 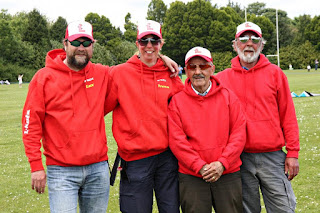 Unfortunately, because I was ground-crewing for Wings on Strings, I couldn't take any pictures of them ...

The other dual-line team present at the festival was Team Spectrum, doing their usual "Carl with two kites - Carl & Bryan - Carl with three kites" sequence of demos. Very happy that Carl flew his "Chi Mai" routine on Sunday! That remains my strong favourite of all the routines I've seen them fly over the years. As happened last year in Brighton, we ground-crewed for them, they ground-crewed for us (thanks, guys!) 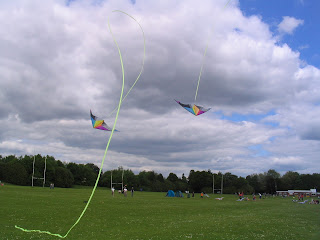 Last, but most certainly not least, The Flying Squad also performed their Rev-routines, first with four, later with six kites in the sky. 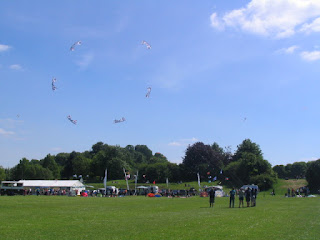 Despite the fact that Team Spectrum and The Flying Squad have many years more experience than we do, they were also really struggling with the wind at times, which meant we didn't have to feel too bad not flying as well as we can.

Some more pictures of the festival, including a few of the prototype of the SuperFly UL, and some gorgeous single-liners, can be found here. I do, however, want to single out one kite here. Nothing whatsoever to do with team flying, but how often do you get a chance to have Debbie Harry on a leash? She pulled quite a bit, I must say! 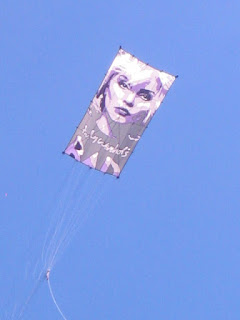 Thanks Kelvin, for letting me fly Debbie!

Picture credits of Flying Fish and L-katz: Roger
Posted by flyingfish at 18:49 No comments: