In an earlier post, I described how we started flying dual-line kites as the first of the three key steps leading to our Festival début. The second significant step was getting our first pair of team kites. This happened after someone on the Fractured Axel forum (incidentally, the premier UK forum for anything having to do with dual-line and quad-line trick and precision kiting) posted a link to a German kite web-shop which listed two kites, designed by Joel Scholz and made by Goflyakite. The kites were in the shape of a fish and a shark, and the poster suggested that it would be great to see the shark chase one or more fish around the sky (no point linking to the shop, as they don't offer these kites for sale any more, and anyway, the kites are no longer in production). I very much agreed with the poster, and thought it might indeed be fun for us to order a pair, and see whether we might enjoy flying kites in formation, something we had never done before.

Irma agreed, and not long after, we had in our possession a pair of Fish & Shark (or Neptune & Jaws, as they're officially called) kites! 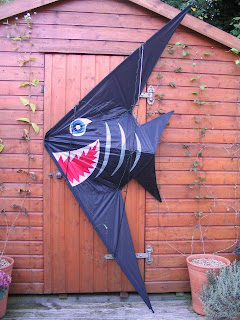 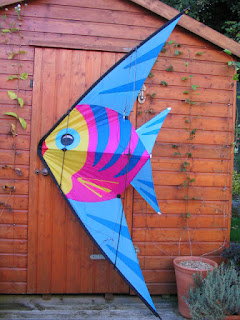 Getting the kites is one thing, flying them in formation quite another .... By that time, we had been to a few Kite Festivals, so had seen performances by kite display teams such as Team Spectrum and Close Encounters. What seemed to be one of their simpler moves is when the two kites keep following each other along a path resembling a figure-of-eight lying on its side (also called 'infinity'). So we decided to try flying such an infinity. Kites launched, Fish turned to the right, Shark followed. So far so good! Fish turned down, around, and then up to fly to the top left of the wind window, Shark followed. The lines are crossing, what do we do now??? Help!! PANIC!!! And the kites came crashing down ... 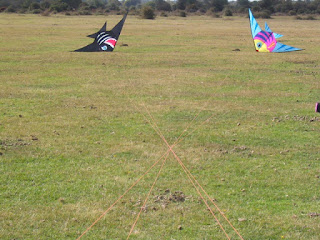 It took us a wee while to get our brains around the fact that it doesn't matter at all if the lines are partly wrapping around each other. Simply keep flying, ignore the crossing of the lines, it makes no difference. Once that 'clicked', we managed to fly our first infinities. Tracking was far from perfect, but we could now go round and round flying infinities without crashing! 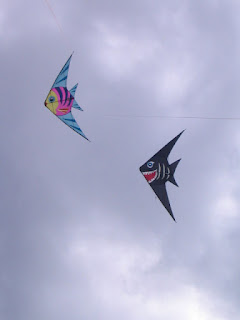 So, a new kiting team was born! What to call the new team? Obvious: Flying Fish!
Posted by flyingfish at 08:15