You're flying in a pair or team, and you're the caller. The other member(s) are of course usually behind you, and it will often be windy. So you're calling away from the other pair/team member(s), and you're calling essentially against the wind. Is it a surprise that your calls are sometimes misheard, unless you really bellow, in which case you have no voice left after a training session?

To avoid all this, we've been looking around for some sort of communication system that would allow easy transmission of the caller's commands for when we fly as Flying Fish or with L-katz. I put a call for information on our Facebook page and received several replies, one of which was from David Morley, suggesting to look into systems used for guided tours. Now if you follow our Facebook page, you'll already know we found a tour guide system (thanks, David!) that does exactly what we want and need. So here's a bit more detail now that we've flown with it a few times.

What we decided to get for Flying Fish is a Tourtalk system, sold by Sound Induction Systems. Our system consists of a transmitter with headband microphone, and a receiver with earpiece. It also comes with the necessary wires and connectors to plug in our own mp3-player, such that everyone can hear the music during practice sessions, as well as the commands over the music. Everything comes in a small sturdy case. 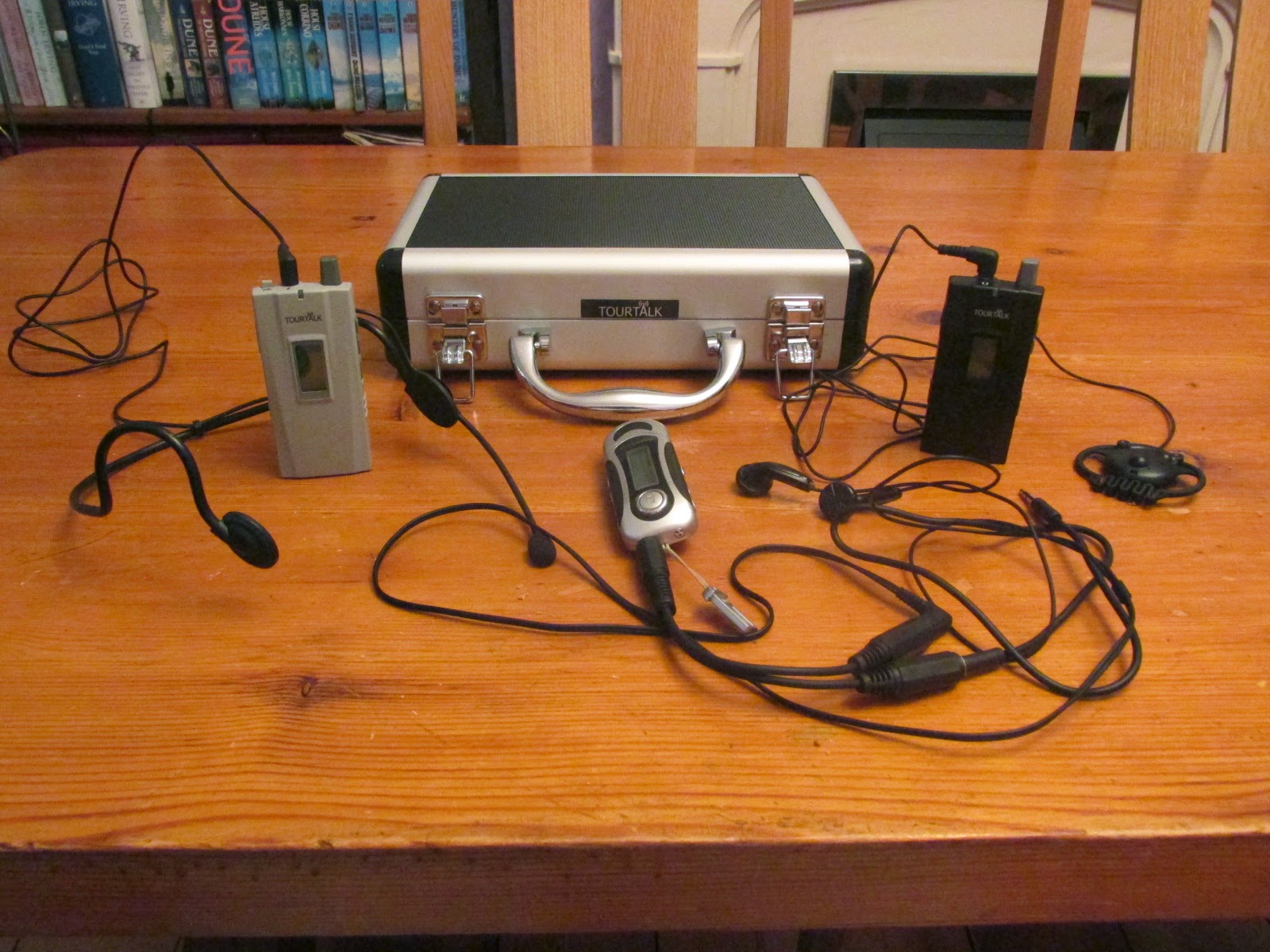 So how does it work in the field? An absolute treat! Commands can be heard crisp and clear, and even in 20+mph winds, no wind noise whatsoever is picked up by the wee microphone; the wind guard is really doing its job. The headband is not in the way of sunglasses, cap, and earphones when using the mp3-player (obviously, the caller needs to hear the music as well!). 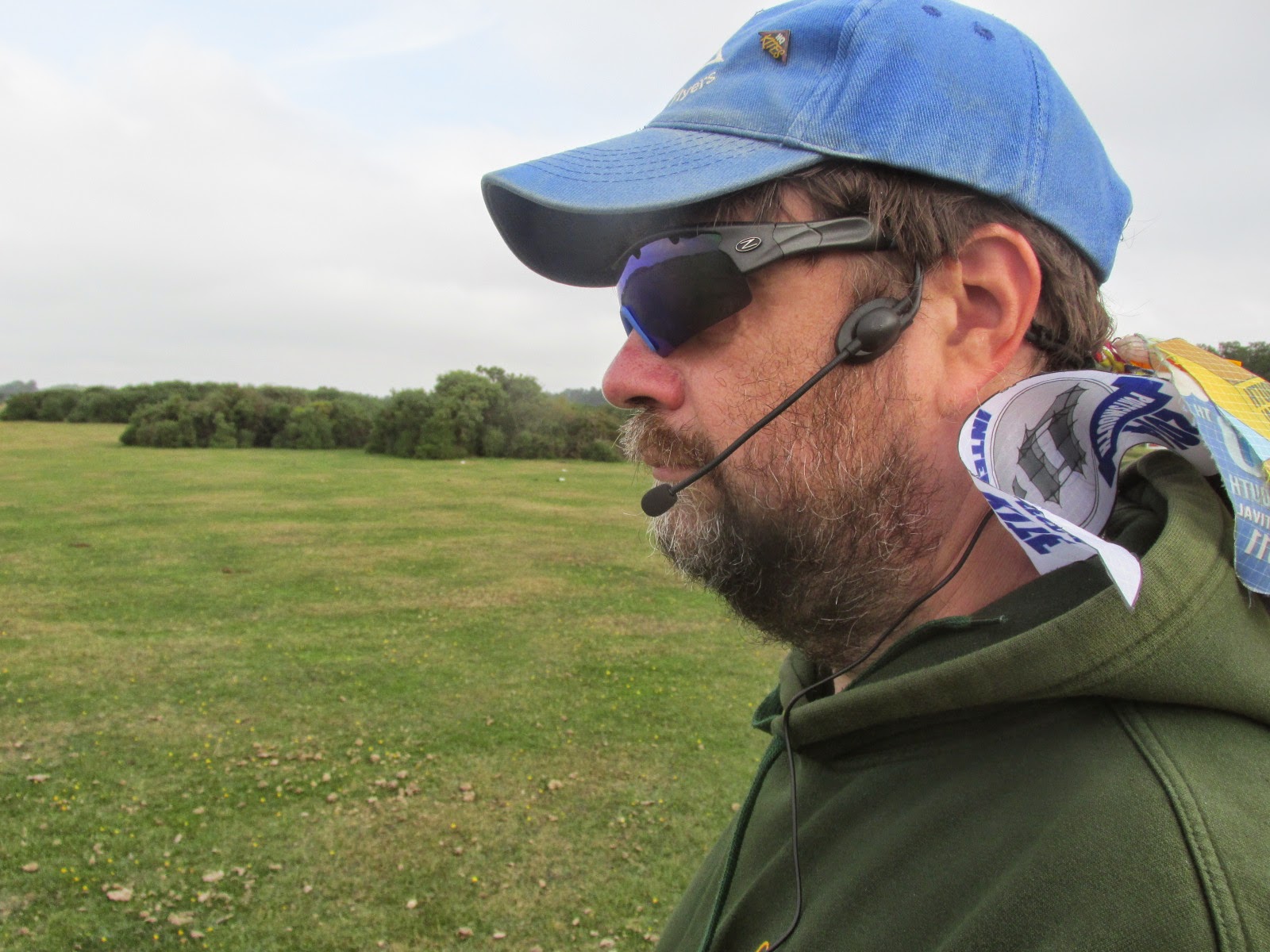 Range is said to be up to 120 metres; we haven't tested this to its limits yet, but have no problems over a range of 40-50 metres, and you don't normally need more than that. The receiver allows the volume to be turned up or down, so by balancing the volume of the receiver and the mp3-player, you can quickly arrive at a situation where both music and commands are clearly heard. 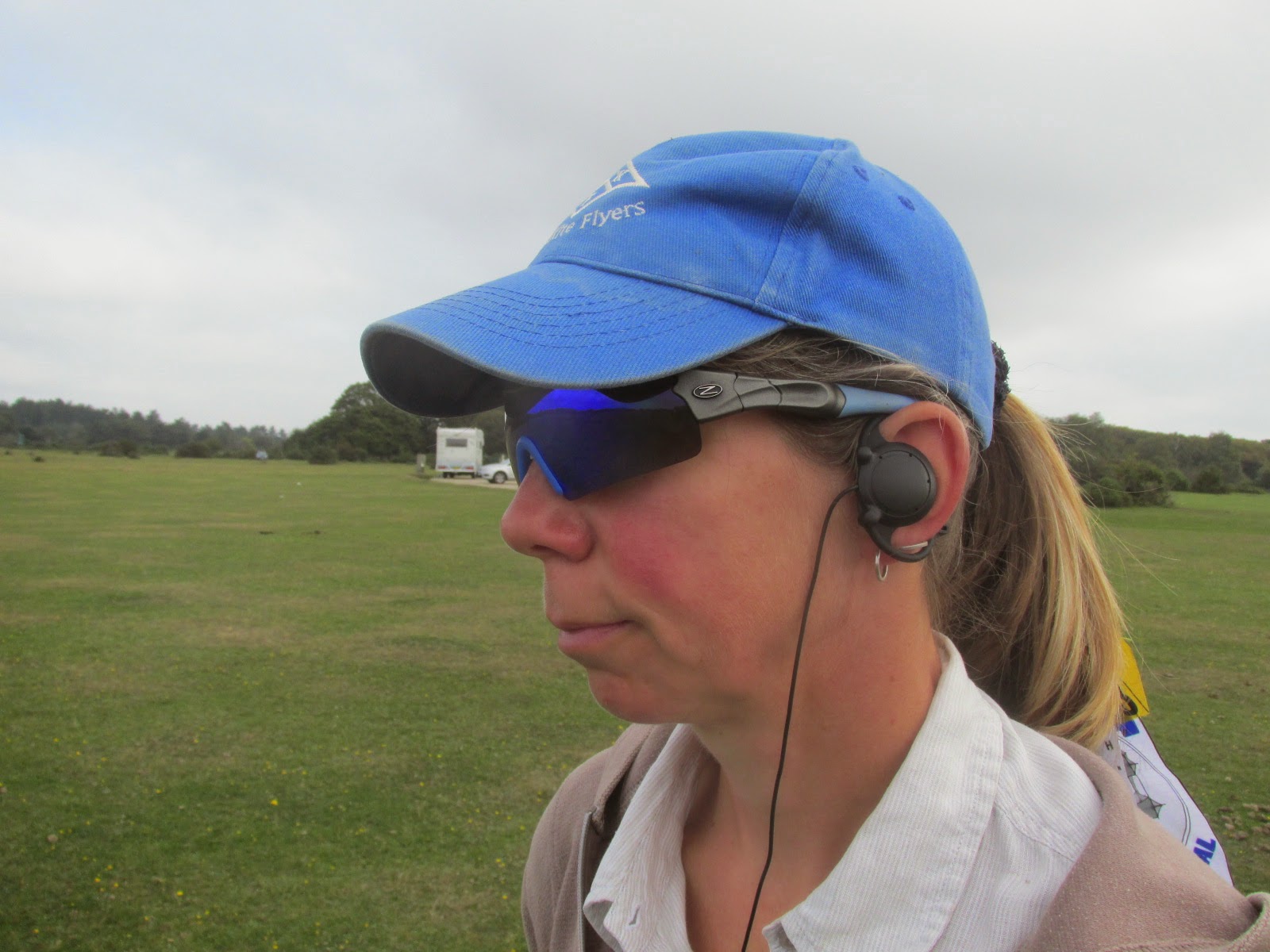 Both transmitter and receiver clip onto your trouser belt and are powered by a single AA battery; we still need to find out how long one battery lasts. The system can operate on 40 different channels, so should it interfere with the PA system at a kite festival, it's easy enough to switch to another channel.

We've now used it at Portsmouth Kite Festival (if you look closely at the first picture in that blog post, you can see the microphone) and a few practice sessions. And it really does exactly what we need, while being very quick and easy to set up and operate. There has already been interest from another kite team (Fusion), but should we fly on the same field at the same time, the multi-channel feature allows several systems to operate in the same space without interference. And in case you're wondering, we still need to convince the other members of L-katz to get a few more units for the team ...

I must also say that I have been impressed by the excellent service provided by Sound Induction Systems. They replied quickly to my initial queries, and offered to send us a demo kit, at no cost to us, to try out for a weekend (an offer we gladly accepted). They've always been professional and pleasant to deal with; thanks guys!
Posted by flyingfish at 18:02 No comments: