When we flew our main festival and competition routine at Portsmouth Kite Festival a few months ago, we had already decided that it was time to retire our 'Ruthless Queen' routine, and to start working on something new for 2016. Doesn't mean we'll never fly this routine again, of course, but we felt we needed to try and up our game a bit, and practice a routine which is much more to the music than with the music. This was the main criticism we got after we'd flown at the National Championships in June.

Now for those of you who have followed this blog for some time know that we still have a routine 'on the shelf', which we started some work on a while ago, but which was then put on the backburner for various reasons. I'm talking about a routine to 'Chariots of Fire', originally composed by Ron Reich of Top of the Line fame. The nice thing about this routine is that it has already been worked out with time points, etc, so we can focus purely on flying it to the music, and get more experience in flying it no matter the wind strength. A future step would then be to write our own routine, completely from scratch. But that's indeed for the future.

In the meantime, we have started practicing this routine, adapting it as we go along to suit our kites and style of flying. Sometimes, that tweaking is just a matter of leaving out or adding a single element; sometimes it involves more major changes to a pattern, or even doing something entirely different, if we feel it can be made more interesting or adds more variety to the routine. 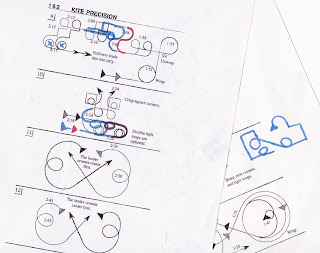 The practicing we've done so far has clearly shown flying a routine to music is a completely different ball game! Especially adapting your flying to the prevailing wind such that those circles are flown at exactly the same point in time, no matter whether your kites go slow or fast. That in itself ought to make us better flyers, if nothing else.

We sincerely hope to have this ready as our main routine for 2016, at festivals and for competition, and that's what we're really going to work for over the winter. Hoping to come to a festival near you!