One week before our first festival appearance (at Basingstoke), so I guess this weekend (Stoney Cross on Saturday, Stokes Bay on Sunday) counted as the 'dress rehearsals'!

On Saturday, our pair routine went really well, possibly the best routine we've ever flown. It all clicked and worked, so we were pretty happy. 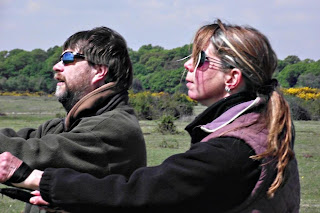 Still riding high on the buzz from Saturday, Sunday was even better! Our pair routine was just spot on. Neil, who used to judge at competitions, thought it was superb, and competition level. 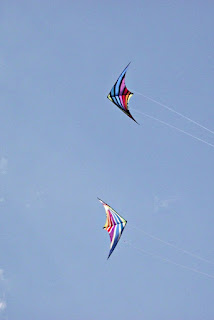 Don't think we could be in a better position at the start of the festival season!

Flying with the team on Sunday, and again we had a really good session. 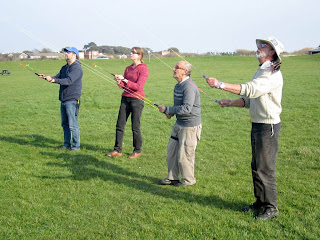 It's all coming together, in spite of the fact that we lost so many practice days over the last half year or so. 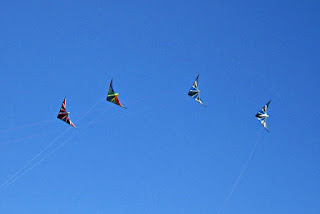 And then Wings on Strings, who took the brave decision to change their routine music this late in the game. 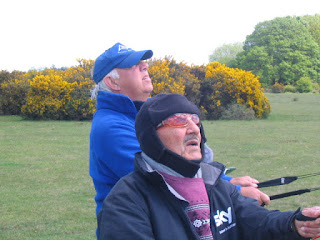 I must admit their new routine music (Abba's "Fernando") suits their routine much better, and they got used to the change in music quite quickly. 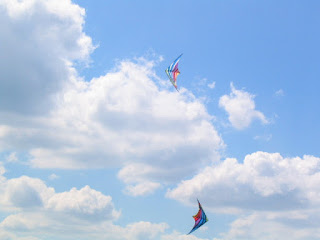 Bring on the 2013 festival season, Flying Fish, L-katz, and Wings on Strings are ready!

First four pictures taken by Roger
Posted by flyingfish at 11:58 No comments:

Bought this kite from Charly Whitaker some time ago: a Bat, made by Flight Line Kites. I've been told that only something like 200 of these kites were ever made ... 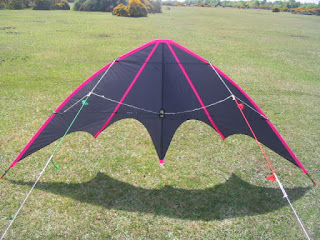 Kite flies really well, tracks nicely, can fly sharp corners and tight wing tip circles, but above all that, it just looks absolutely awesome in the sky! 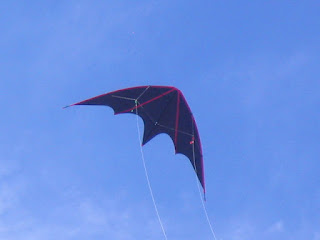 Optimal wind range for the kite is something like 5-10mph, so quite a light wind kite. Why do I dedicate a blog post to this Bat? And why the ", or two" in the title? Well, in addition to the kite, I also bought a sail from Charly. Our experiences flying this Bat are very positive, so well worth framing this sail, and have a pair of these kites to fly!

And should we ever write a routine for these Bats, there is only one piece of music that would be appropriate ...

Flight of the Wounded Bumblebee

In a comment to our second blog post, Rich Edwards, a friend and (soon to be ex-)colleague, challenged me to fly a routine to "Flight of the Wounded Bumblebee". He really threw down the gauntlet there, and if you don't know this piece of manic music, here's a reminder:


See what I mean with 'challenge'?

Meeting this challenge kept nagging at the back of my mind, and I'm very pleased to announce we've done it! We did need the right conditions for it, which in this case meant a 15-25mph wind. And we also needed the perfect kites for it: a set of small and very fast kites, home-made for the team some time ago: 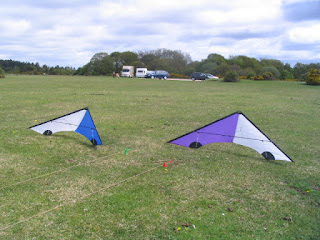 Because the piece of music lasts just a minute and a half, we could easily make it up as we were flying, throwing in chases, wraps, infinity wraps, and anything else we could think of more or less at random. 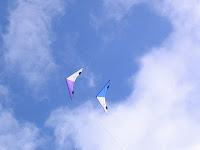 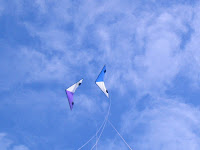 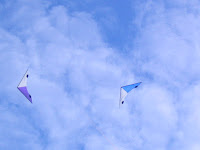 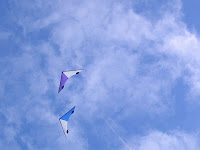 It took a few tries to land the kites at the end of the music, simply because we had to listen to the music a few times to know when the end was coming. Last run we landed perfectly! 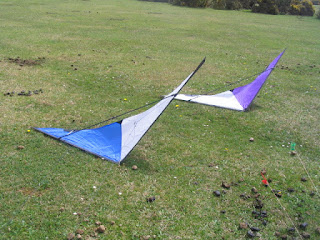 Rich, we've met your challenge now! And not only that, it also gave us a fun little thing to add to our portfolio, to be flown when the conditions are right. Thanks!
Posted by flyingfish at 16:54 2 comments:

As usual, Weymouth was the opener of the festival season for us. And this year, it gave plenty of sunshine, but a crap wind .... Coming, or rather, rolling over the hotels on the Esplanade on to the beach, it was full of holes, layered, and literally all over the place. Hats off to the various pairs and teams for flying their respective routines the way they did!

So who was there in terms of pairs or team? First of all, the Airheads, flying as a three-(wo)man team (Peter, Keith and Vee) and as a pair, consisting of Keith and Vee (aka Ex-Grads), flying Airdynamics T5 kites: 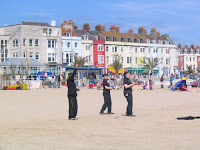 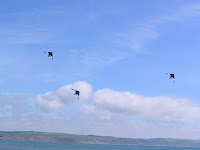 Then, fresh from the European Championships, Team Flame (Barry, Fran and Tony; including Phoenix, consisting of Fran and Tony), flying their Fury kites: 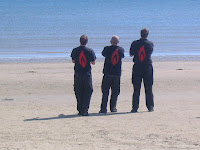 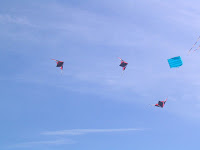 And the final dual-line pair consisted of Allan and Marilyn Pothecary, aka Close Encounters, again flying Airdynamics T5 kites, but with their trademark tails: 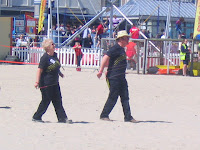 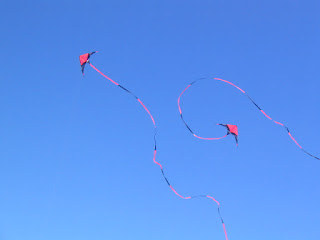 Flying the flag for quad kites were The Decorators, who, like all the other teams, struggled a lot with the wind conditions: 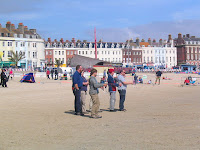 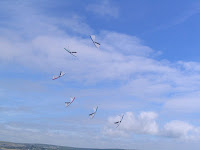 The grand finale consisted of a dual-line mega-team, for which Airheads and Team Flame joined forces. They asked us to fly with them, but unfortunately, there weren't enough of the right kite, given the wind conditions. Still, thanks a lot for asking us, guys; next time! 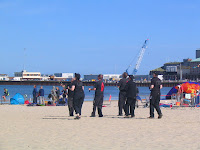 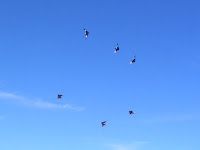 Plenty more photos, including Paul Thody flying his Flexifoil stack, the trick-out competition, and many of Karl Longbottom's kites (we joined that display with our Pterodactyls), are here.
Posted by flyingfish at 16:43 No comments:

Organised by STACK Italia, the European Kite Championships 2013 took place in Cervia, April 26 & 27. It turned out to be a championship dominated by French flyers, taking four from six titles.

Lots of photos of the event can be found here. If and when videos of the winning performances are posted, I'll update this post, but meanwhile congratulations to all!
Posted by flyingfish at 18:37 No comments: