When I first saw a picture of an Aerialogics Cyborg kite, I knew I just had to have one. Took me quite some time, as, first of all, they're pretty rare; and second, because of the central 'cross', they're expensive to ship.

I certainly never aimed to get a second Cyborg, but when one was offered for sale for a very decent price on the Gone with the Wind forum, I jumped at the opportunity.

So here's our pair of Cyborgs! The green kite is the one I got a few years ago; the red-and-yellow kite the one I just got. Because of the colour pattern, the red-and-yellow Cyborg sort of resembles a shark (ok, it's mostly my imagination, but I do see something 'toothy'!) so that links back to our very first pair of team kites. 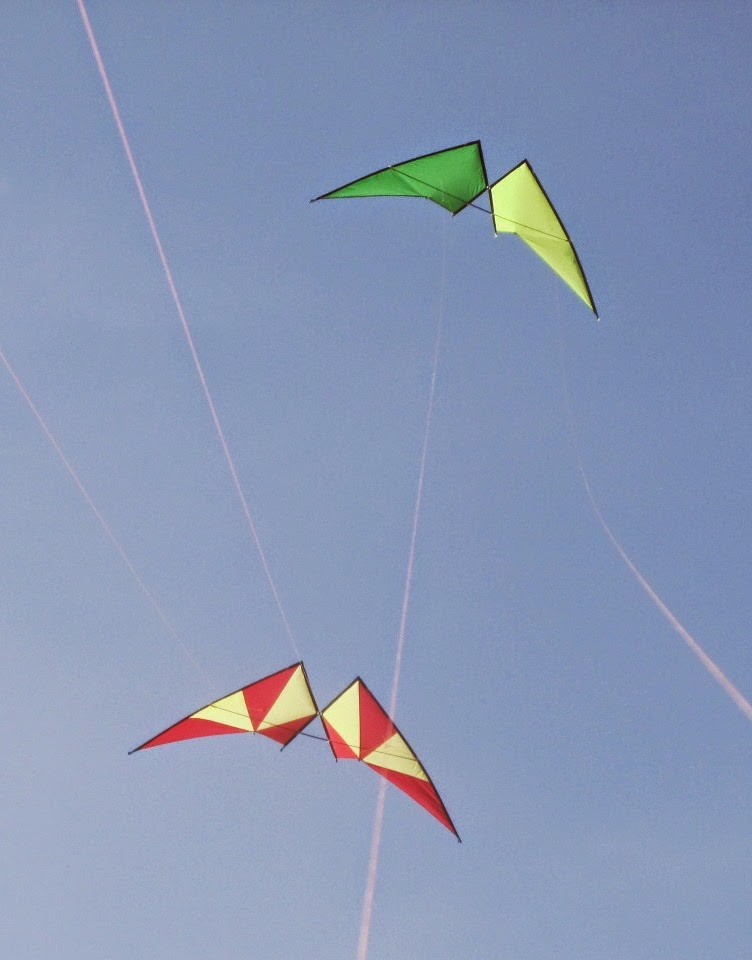 In terms of flight characteristics, they're relatively slow flyers, good in tracking and circles, but not so good in sharp changes in flight directions. The frame, not having an upper spreader, flexes too much for that. But that doesn't stop us from enjoying flying them, and I think they look great in the sky together!
Posted by flyingfish at 11:25 No comments:

I know it's still February, and it ain't exactly nice and sunny out there, but let's look ahead at the 2015 Kite Festival season, and where/when Flying Fish will perform.

May 3-4: Weymouth
Following our Weymouth debut in 2014, we look forward to being back there. And besides flying as a pair, Flying Fish will join Solent Kite Flyers in a mass-launch of Cobra-Serpents.

May 30-31: Exmouth
New festival for us; we look forward to exploring new grounds and meeting new people.

June 6-7: Basingstoke
This will be our third consecutive year flying at Basingstoke.

June 13-14: Dunstable Downs
Not a kite festival, but the UK National Championships; we've got a trophy to defend!

June 21: Streatham Common
One day festival; also new one for us.

June 28: Herne Bay
Another one day festival, and again a new one for us.

July 11-12: Brighton
We're practically part of the furniture there: debut in 2012, and been flying there ever since.

July 25-26: Dunstable
Very glad to be back at Dunstable Kite Festival; good memories on that field!

August 15-16: Portsmouth
We flew here unofficially in 2013, and were officially invited for 2014; very happy to be back again this year!

OK, those are the confirmed festivals for us. In addition, we're hoping to fly at Bristol (August 22-23) and Malmesbury. Whether Malmesbury, where we've flown the last two years, happens, we don't know, as we've not had a confirmation of a date yet.

So if everything confirmed plus everything in the pipeline happens, we'll be flying at 10 festivals this coming season, plus the UK Nationals. We're going to be busy over the summer!

Posted by flyingfish at 17:03 No comments: