Traditionally, Weymouth Kite Festival is the opener of our festival season, and this year it was no different. The forecasts leading up to the festival were pretty bad, and Sunday saw the most horrid and evil winds we've ever flown in at a festival. Brick walls, sudden gaping holes, extreme turbulence, strong gusts, you name it, we got it. We flew T5 Taipan standard kites, not because the wind was suitable for them, but because they were sort of in the middle of the sudden lulls (when you needed a super-ultra-light) and strong gusts (when you needed the mega-vents). We tried to fly our Ruthless Queen and Adiemus routines, we survived, although it was far from pretty ... 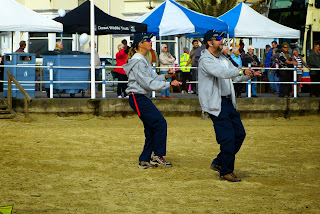 Monday was a lot better: wind a lot lighter, and coming off the water (as opposed to rolling over the hotels on the Esplanade, as it did on Sunday). T5 Cubans were the weapon of choice, and I think we pretty much nailed our routines.

Two other teams were present: Flame, the current UK dual-line team champions (including the pair Phoenix), and the Airheads, flying both as a 3-man team and as a pair. 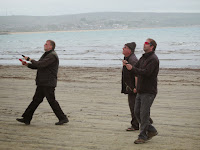 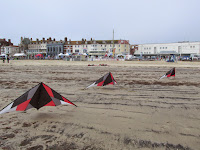 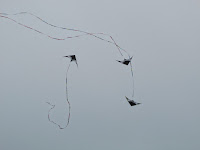 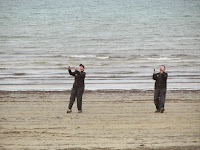 And with three dual-line teams (and Barry) present, there is no way a mega-team doesn't happen. Seven kites this time, and we can truly say this was the most difficult mega-team flying we've ever done, due to the extremely blustery and turbulent wind. It really was a case of not losing concentration for even a fraction of a second ... 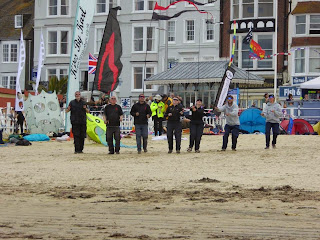 And in case you're wondering: no quad-line teams were present this year, as Weymouth clashed with Cervia.

In order to bring competition flying more to the attention of the public, STACK had decided to try out a fun competition: teams and pairs competing against each other, each flying one particular figure during their warm-up, and then flying one or more routines. Judging was done by the flyers of the other pairs/teams. So nothing too serious, but simply to give the public a bit of a taste for competing in pair- and team-flying. Phoenix won, with a total of 84 points, just pipping Flame to the post. Although Flying Fish finished fifth and last, we're very happy with our score of 70 points, which was only 7 points behind the Airheads, which finished fourth; not a million miles away from the UK top!

More pics of the festival, including Serpents, Swallows, and Smorg, are to be found here.

Picture credit of us flying as Flying Fish: Genoveva Martinez; of us flying in the mega-team: Valerie Hancorn
Posted by flyingfish at 16:00 1 comment: