This one slipped through. And with 'this', I mean this blog post. I'd meant to report we had a second vented Nirvana, which we got some time ago, but hadn't gotten around to taking a few pics of the two Nirvanas in the air and write a brief blog post. So here's our pair of R-sky Nirvana HW kites! We already had the red one, and the blue has now completed the pair. Very nice kites to fly, with good tracking and good trickability, which is exactly what we want in our paired freestyle kites. 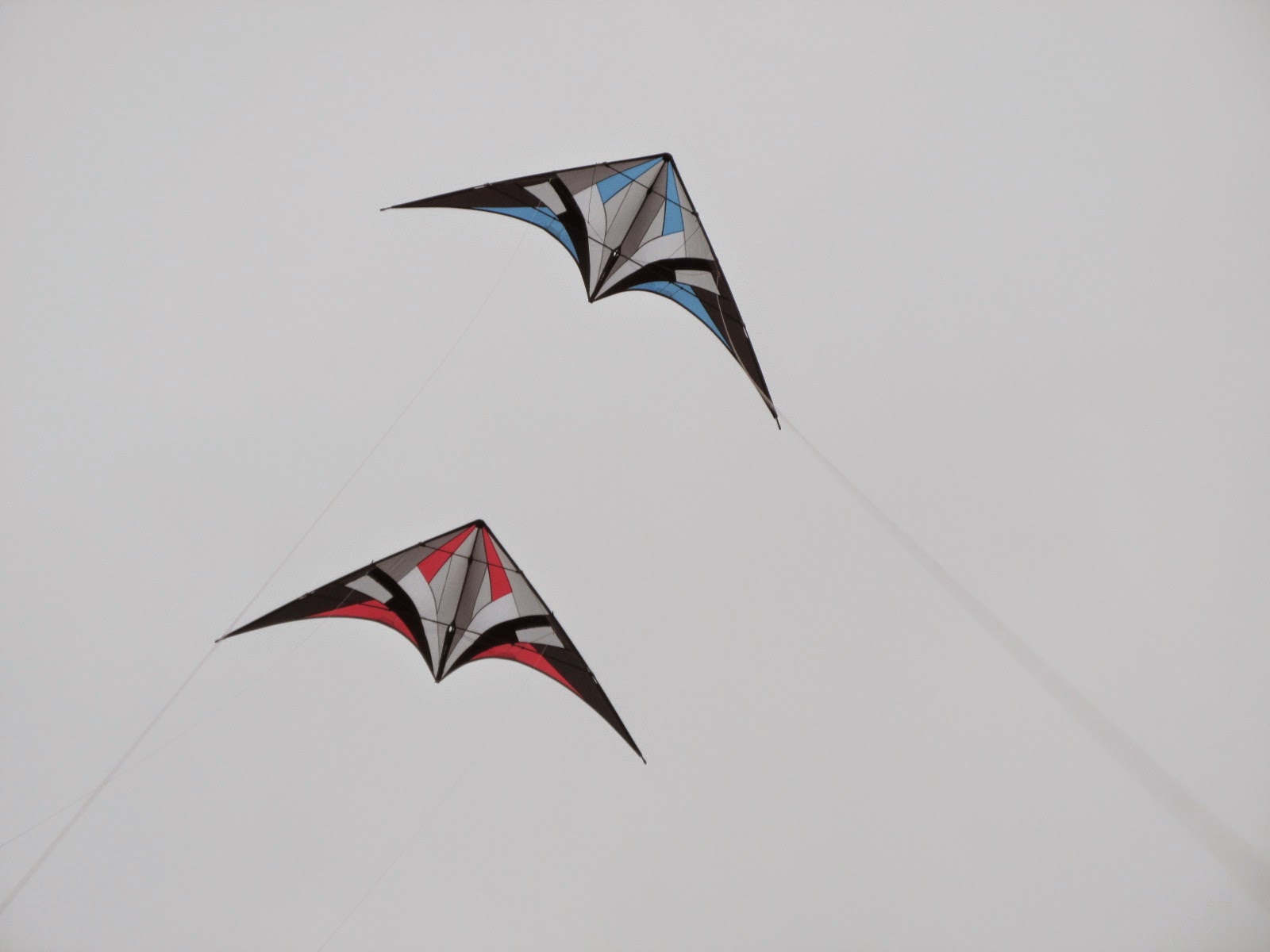 So that means that, after our two Fury 0.85s, our two Cosmic ULs, our two Mambas, and our two Inner Spaces, the roll-up bag that contains our pairs of freestyle kites is now full. It also means that, as the red Nirvana moved from the roll-up bag that contains our (non-paired) trick kites, this bag now has a spare slot. This bag already contains a Vapor, Amazing, Gemini UL, Talon UL, Widow Maker UL, Deep Space, Sea Devil, SuperFly and vented Silver Fox; suggestions for which trick kite should fill this final slot welcome!
Posted by flyingfish at 16:22 No comments:

Just over a year ago, I posted about our routine plans for 2014, and suggested they might be a bit ambitious .... well, they indeed proved to be just that! So let's look ahead to 2015, and try to be a bit more realistic ... 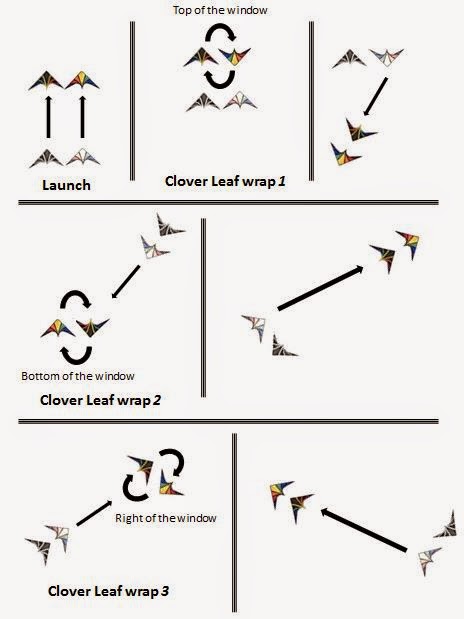 First up, our routine flown to Kayak's "Ruthless Queen". This will remain our main routine next year, to be used at festivals and competition. Following our competition début this year, we received good and constructive criticism from especially Keith and Vee. We have already changed some of the routine to deal with that criticism, and have a few more ideas on how to make it a bit more interesting in places, replace a few patterns which didn't really work so well, or which we now feel are a bit 'meh'. These mostly go back to a time when we were just very happy to get from pattern A to pattern B! The new version of the "Ruthless Queen" routine is definitely going to be ready for the 2015 season; nothing too ambitious about that!

Next, the routine we have already started to use at Dunstable, Malmesbury, and Portsmouth: our make-it-up-as-we-go-along routine, flown to "Adiemus". What we need for that one, first of all, is to add a few more patterns to our quiver, and especially some more complex and intricate patterns. And second, the ultimate aim for that routine is to fly it with tails, so we really need to get a lot more practice flying with tails, so we get a better feel for what works and what doesn't, and for the challenges of flying patterns with something like 100' tails. We also have a rather unusual ending in mind, which we need to try out to see if it really works. Needless to say that, given the tails and lack of strict choreography, this will be a routine purely for festivals.

Finally our "Jaws" routine, flying our Fish/Shark kites to the theme music of 'Jaws'. We had hoped to have this ready for the 2014 season, but we simply didn't get that far. Partly because we shelved it when the first festivals were approaching. And partly because the weather last autumn and winter was such that we lost a lot of practice days (keep in mind that the kites have a relatively narrow wind range, so we can't always fly them). On top of that, we're not happy with the end as we have it now. As Flying Fish was essentially born with these two kites, we definitely want to have a specific routine for them, so we need to pick up the '"Jaws" routine again, and come up with a better ending. I know last year I said it would definitely be ready for 2014; this time no promises, but I hope it'll be festival-ready in 2015. And it will always be a festival routine; we don't expect to use it at competitions.

And what about the "Chariots of Fire" routine, that I mentioned about a year ago? That will definitely become our next main routine, to be used for festivals as well as competition. We really want to use that routine to get better at flying specifically to the music. We started working on it, and have practiced flying maybe the first half or so, but do not aim to do much on it in preparation for the 2015 season. Let's not be too ambitious this time, ok?
Posted by flyingfish at 18:05 2 comments: