Some time ago, I blogged about us looking for a pair of foil kites in the shape of airplanes, to allow us to fly something 'different' at festivals and, hopefully, please the crowd. Well, the search didn't result in anything, either because airplane foil kites aren't made anymore, or because it just become way too expensive for us to get a pair.

Until I stumbled across two airplane foils on the Decathlon website. Yes, they're much smaller than what we had in mind originally, but at £25/30 per kite, also an awful lot cheaper! And certainly cheap enough to just take the gamble and order a pair.

First flight of them was on a blustery day, with the winds mostly 13-20mph, but occasionally dropping away to almost nothing. One of the two kites came with a control bar, but it quickly became clear that that wouldn't give you enough differential to steer them properly, so we hooked them up to two sets of 25m lines with normal wrist straps. 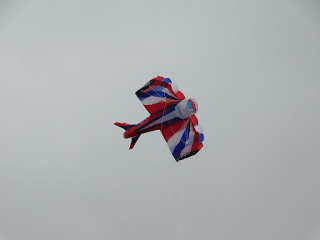 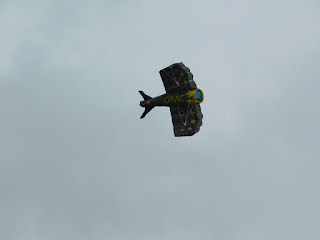 The kites flew ok, but it was clear that they really don't like the wind dropping away. They need constant sail pressure in order to keep their shape and fly. Although they are officially stated for winds between 8-31mph, they need at least a steady 15mph, preferably a bit more, to fly halfway decently. With that 15+mph, they can fly straight-ish lines and loops and circles; just don't make these too tight.

Of course we had to fly them together ... 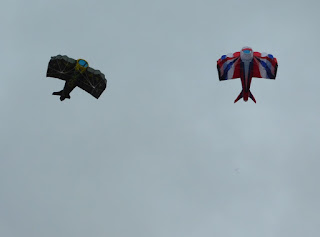 And this showed even more how important it is to have constant sail pressure. But when you have that, you can fly them together, as long as you stick to simple follows, infinities, loops and circles, etc. No (half-)axels with these kites!

Given the price of the kites, they're certainly value for money, and they will offer us an opportunity to do something a bit different at a kite festival, when the wind is really picking up.