A new pair of T5 Cubans

If you've been following this blog for some time, you'll be aware that we have a full set of Airdynamics T5 kites, which includes a pair of super-ultralight Cubans. So that's the situation for Flying Fish, and we can fly with almost any wind. With L-katz, we're mostly flying North Shore Radicals (plus VIPs and Konas), and the other members of the team also have an ultralight T5 Taipan for when the wind drops below what the Konas can deal with. But if the wind drops further down, we're basically stranded as a team ....

With that in mind, we decided to get a new pair of Cubans for Flying Fish, and then move our earlier pair to the L-katz team bag, so we can keep flying as a team even if the wind drops to almost nothing.

We've had our new Cubans for some time now, but every weekend since we got them, the wind was too strong for their maiden flight. Until today, that is, when the wind struggled to get above 4-5mph, so here's our spanking new pair! 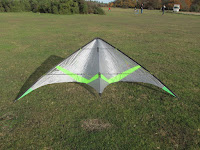 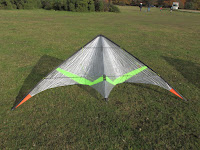 You may notice that our new pair has only grey cuben in the sails; this is simply because white cuben isn't available any longer. 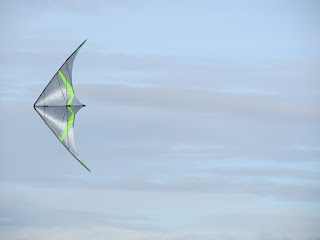 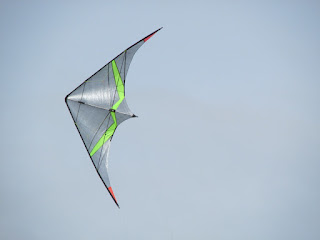 Obviously, we flew them together, and they behave exactly as you would expect from these kites. 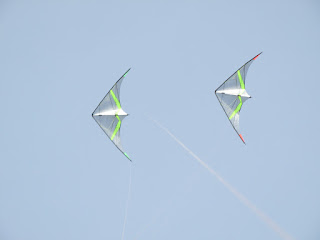 Look forward to flying them much more, and also together with their older siblings as part of an L-katz display!

More than 3 years ago, I blogged about a Flexifoil Stacker 6 2-stack we got, and said we'd be looking for a second 2-stack, to fly them as a pair. Well, time flies when you're having fun! We've actually had a second pair of Flexifoil Stacker 6 kites for quite a while, but simply didn't get around to flying it, and testing out whether two 2-stacks would work for pair-flying.

So here finally is our second Flexi-stack, in the Midnight colour scheme! 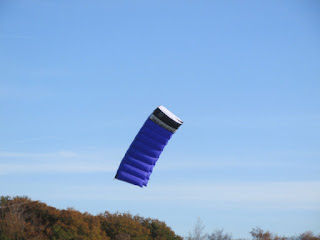 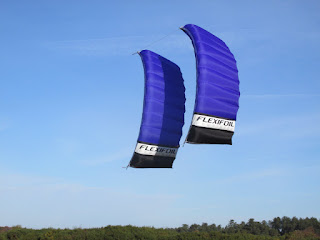 And as we now have two 2-stacks, next step was testing out their suitability for a pair routine. 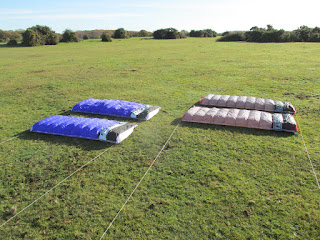 Turned out it worked fine! Of course, they're not as snappy as a dual-line delta kite, but we could easily fly synchronised circles, loops, ladders, jumps, wraps, and boxes with round corners. And no, they don't axel ... 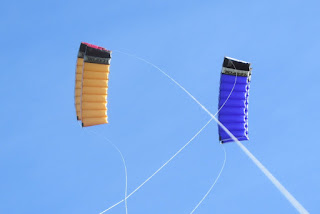 What music to fly them to? One thought that crossed my mind is Jean-Michel Jarre's Oxygene IV.


It has the right speed and rhythm, and the 15 seconds of 'air' before the actual music starts would give us opportunity to get the kites launched and in the air before the 'routine proper' begins.

Another bow to our string, possibly coming to a festival near you in 2017!

Posted by flyingfish at 15:57 No comments: 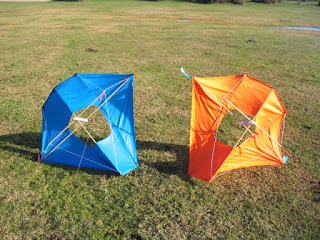 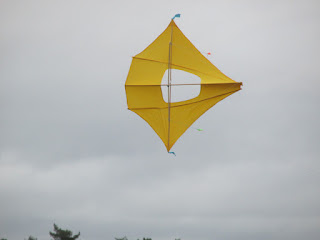 It's pretty clear what's missing from our quiver: a 'medium' (51') Flying Machine! Cue a fellow kite flyer, who handed me a bag with sails and dowels at Basingstoke Kite Festival: free if I wanted them. Upon opening the bag, I found myself in possession of two Dunford FM sails, and more than enough dowels and other essentials to frame them several times over. Thank you, you know who you are! 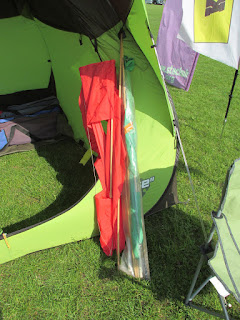 The first outing of our pair of 'medium' Flying Machines was in rather extreme conditions: the wind was gusting over 40mph. Very soon after launch (and I'm talking seconds in one case), the two kites suffered from a broken cross spar and spine, respectively .... 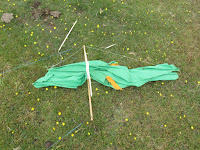 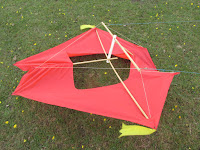 The dowels were easily replaced (the bag contained plenty of spares, remember?), and finally both 'medium' Flying Machines were ready to fly together. The wind was much more more benign now, up to 18mph. 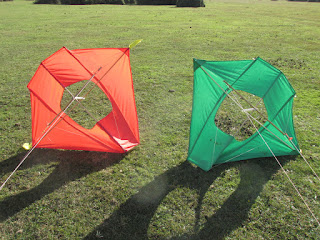 Compared to the 'small' ones, the 'medium' Flying Machines are a tad slower, and don't turn as fast. But they really feel as you would expect from a Dunford Flying Machine. 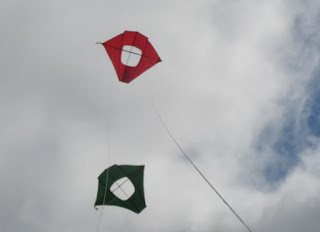 To complete the set, we just need one more 'large' Flying Machine ... But that will have to be in a different colour from what we already have. So no blue, orange, yellow, red or green. Did Flying Machines come in pink, purple, brown, white or black???
Posted by flyingfish at 13:09 1 comment: