We flew at Streatham Common Kite Day for the first time last year, and they must have liked us, because we were asked back! Like last year, there was a very relaxed community atmosphere. The mostly sunny weather ensured that loads of people attended, with many flying their own kites around the arena.

And like last year, the wind was extremely difficult to fly in ... very light to start with, full of holes and turbulence, often turning direction up to 90 degrees in seconds, and with very little oomph even when it seemed to pick up. 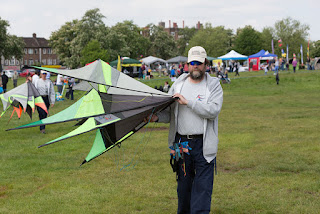 Still, we did what we could, flying three slots with our new "Chariots of Fire" choreographed routine, and our 'make it up as we go along' routine to "Adiemus". 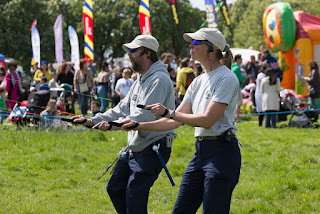 I mentioned the wind turning directions. In our second slot, the wind turned such that we couldn't hear the music from the PA anymore, and I can tell you that it is really really difficult to fly to music you can't hear!

We did go out on a high, though, because in our final routine of the day, we managed to do the double catch! I think Chris Goff was rather surprised at the ending of our routine.

Team Spectrum, our regular and loyal kite festival neighbours (they had even reserved a space for our tent next to theirs!), was also present, and they flew their usual sets of three routines (Carl flying two kites, Bryan and Carl flying pairs, and Carl flying three kites). 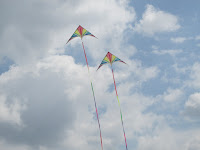 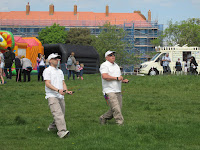 They also struggled a lot with the wind, and had to restart their routine more than once after the kites dropped out of the sky.

I didn't really have the opportunity to take many pictures, but a few more pictures of the day are here.

And finally, there were two tv stations present, who wanted to film the event, and interview us! First, we were interviewed by Eleanor Cunningham, of London Live. I can't seem to embed the video, but a link to the report and interview is here. 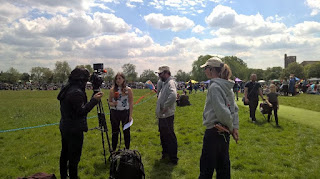 And then we were filmed and interviewed by Ben Tavener of BBC Russia for his ‪#londonблог‬. Not only that, but he also asked me to fly his self-made sled kite. As you will see in the vlog, there wasn't enough wind for me to fly it properly, and I had to reel it in from a long launch really fast to get it airborne.


An 'extra' edition features more of the actual interview:


Picture credit of us preparing and flying: Graham Webb
Posted by flyingfish at 20:12 No comments:

Weymouth saw the debut of our new 'Chariots of Fire' routine! First run on Sunday wasn't a success, as the lines of my kite got tangled in the line of a Trilobite lifter several times, and that doesn't really help if you fly a routine timed to music ... Subsequent runs went much better, but we're still not happy with the end sequence, so that needs some more tweaking prior to the next festival. 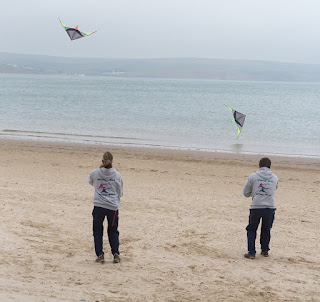 While flying the first of the two Adiemus routines on Monday, as we were getting in position for the double catch at the end of the routine, I slipped in the loose sand and fell on my back. I was fully determined to make sure the kite did not crash, and managed to steer it towards Irma's hands for a catch while half-sitting, half-lying. People said I had a very determined look on my face!

As last year, both Flame and Airheads were present again, flying several routines each on both days. 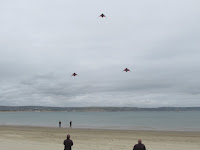 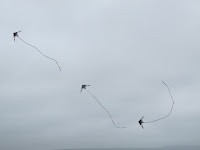 And with three dual-line pairs/teams on the beach, mega-teams were unavoidable! We flew four times, with between 8 and 10 kites in the air at any one time. 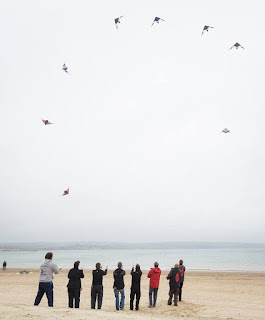 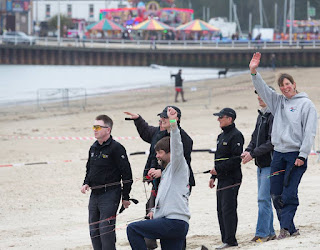 Not too many errors, despite the really challenging wind, but Barry's idea of an 8-man wrap didn't quite work out as planned ... (or maybe it did; he has a wicked sense of humour ...)

Alan Pinnock put together a really nice video, with footage of the mega-team between 5:20 and 6:21:


More pictures of the festival are here, but I want to pick out one picture for this blog post: 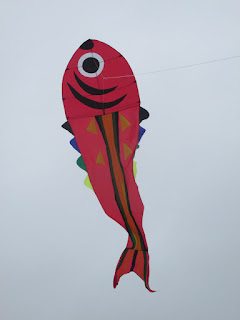 What happened was the following: we saw someone fly this large fish kite, and being Flying Fish, we walked over for a chat with the owner of the kite. To make a not-so-long story even shorter, after we'd walked back to our tent, he came after us and gave us the kite: a flying fish for Flying Fish! Just goes to show yet again what great people kite flyers are; thanks again, John!

Picture credit of Flying Fish and the mega-team: Helen/Stephen Jones (via Facebook)
Posted by flyingfish at 15:31 No comments: