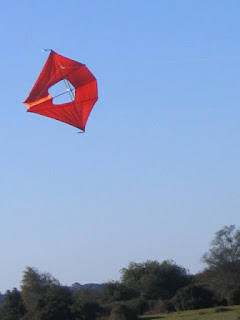 In the early 1970s, flying dual-line control kites was popularised mostly by Peter Powell, and many people will have flown a PP Stunter, either as a child, or for reasons of nostalgia. A second dual-line control kite on the market around the same time was developed by Don Dunford. His Flying Machine was regarded as the 'Rolls-Royce' of kites in at least one contemporary book on kites, due to its high level of control.

We've got an orange Dunford Flying Machine, picked up, in mint condition, for little money some years ago. We hadn't flown it for quite a while, so last weekend we decided to take it to the field, and flew it in winds ranging from 15 to well over 25mph.

What's all this got to do with pair/team flying? Very little, yet ... The Dunford Flying Machine is a heavy kite due to its cloth sail and wooden dowels. Basically it doesn't really want to be bothered when the wind is below 15mph (it will fly from, say, 8mph onwards, but only reluctantly). When the wind gets to 20mph and above, the kite is really in its element. Snappy corners with some practice (it doesn't need much input), reasonable tracking, very tight turns, and little pull. So .... what if we were to stumble across a second Dunford Flying Machine, with a different sail colour (I know it also came in blue, with orange tassels), wouldn't it be fun to try and fly a routine with a pair of 1970s 'Rolls Royces'?

I think I know exactly where to go first in order to try and find one ...