As you may have seen on our Peter Powell Kite Collection blog, we now have a pair of Peter Powell Skyrakers, a 3-panel one and an 11-panel one. 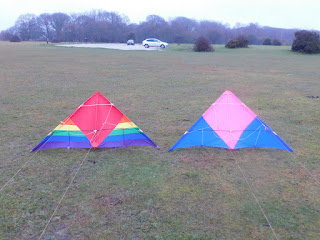 Obviously, we had to fly them together ...

This happened with the wind gusting well over 20mph (on the ground, so add another 5mph or so where the kites usually are). 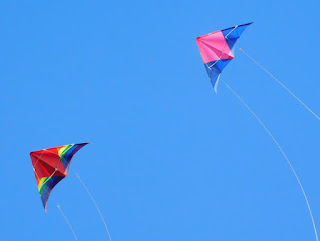 They do fly well together, but struggle with sharp corners. And despite their relatively small size (1.70m wing span) they develop quite a pull in winds over 20mph!

We're not planning to fly them together in any specific routine, but I hope you agree with me that it just had to be done ...
Posted by flyingfish at 21:03 No comments:

This all started with Sue Storey posting two pictures of a rather unusual kite on Facebook. She wanted to know what it was, and who made it, as she was keen to get a second one for pair-flying.

No upper spreader, no spine, and a separate triangular piece of sail at the tail end of the kite. Somehow reminiscent of a Utopia ... Turned out that the kite is a Venom, made by Roy and Hayley from Kites Up. Their web-site didn't list a Venom for sale, but thanks to Wayback Machine, I did manage to find an old version of their list of kites for sale, which did have a picture of a Venom. 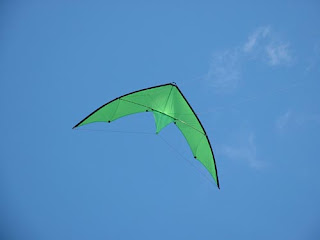 The unusual design is not obvious from the picture, due to angle at which the picture was taken.

I'm pretty sure you've seen this coming. Quick email exchange resulted in Hayley saying they still had the plans, and they'd be happy to make Venoms if people wanted them. She sent me samples of the range of ripstop colours they had available, and we spent quite some time playing with the colour options to arrive at designs for a pair of matching Venoms.

And here they are, a pair of yellow/gold and gold/yellow Venoms! 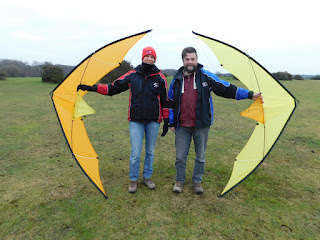 Their first time out, the wind was 0-2mph. Bit on the low side for their wind range (5-15mph, according to Roy). Occasionally, the wind gusted up to 6mph and we could briefly get the kites up for maybe 15-20 seconds. 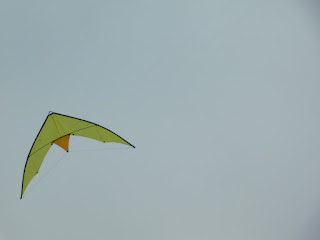 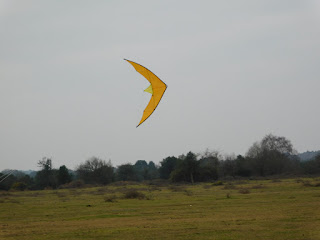 When trying to fly both, they dropped out of the sky before we were able to take a picture ... 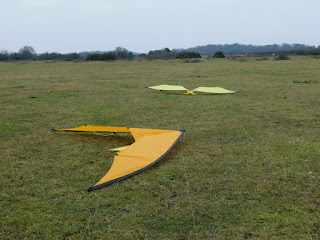 Next time we flew them, the wind was 5-10mph, and the kites liked that a lot better. 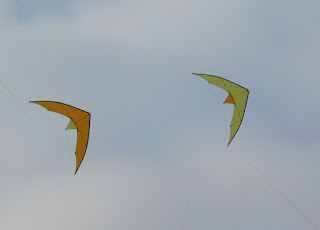 At light winds, the kites tend to oversteer, and they certainly need to have constant wind pressure on the sail; if that disappears (say, at the edge of the wind window), they may suddenly drop out of the sky. But as the wind gets a bit stronger (8+mph), their tracking improves considerably. Similar to the afore-mentioned Utopia, they turn very tightly. Curious how they will handle in winds of 12+mph; my guess is they will speed up quite a bit. Oh, and they really don't like (half-)axels, though that may well be due to us not giving the proper input; we'll keep trying!

By the way, Ken, Sue's pair partner, did get a red Venom to match her grey one. It's flown here by Ken at Fuerteventura: 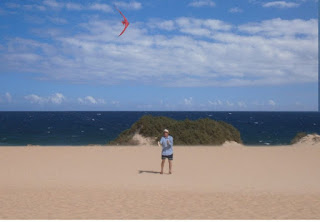 The latest UK dual-line pair doesn't as yet have a name; join the Facebook group dedicated to sport kite pair/team-flying to be kept up-to-date on this and anything else related to the sport!

Picture credits - of her grey and red Venoms: Sue Storey; of us holding our pair of Venoms: Roger Backhouse.

We really like Rare Air kites. We got two pairs of Rare Air Pro Cheetahs, (a pair of Stealths and a pair of Spectrums), and they're great kites for pair-flying, with excellent tracking and generally a joy to fly.

Besides the two pairs of Pro Cheetahs, we also have a Flash Angel, which we got as part of the Berrington Hoard. 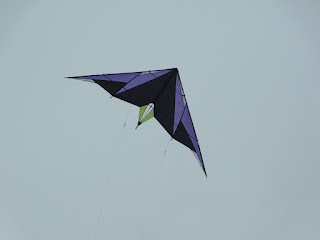 Like our other Rare Airs, is has solid tracking and is a real pleasure to fly. I wasn't actively looking for a second Flash Angel, but when one crossed my path ...

So here's our second Flash Angel! 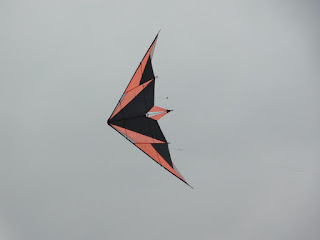 The two Flash Angels are slightly different in their frame design in that the stand-offs of the orange kite are much thicker than those of the purple kite, resulting in a slightly stiffer frame and a slightly heavier kite (by about 40 grams) generally.

Of course, that's no reason not to try and fly them together! 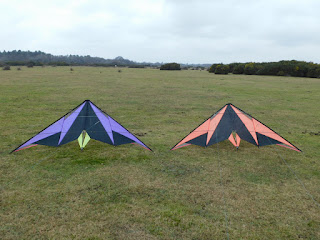 Despite the difference in frame and weight, the Flash Angels match each other almost perfectly in speed, tracking and general handling. 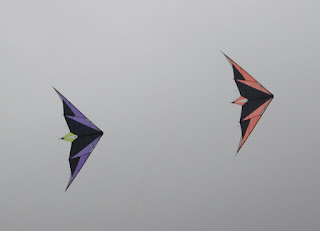 A very nice addition to our pair quiver, for sure.
Posted by flyingfish at 15:24 No comments: