Flying Fish is a dual-line pair, and we have no plans to change that in the foreseeable future. But that doesn't mean we can't add something a little different to what we can do at festivals, does it? 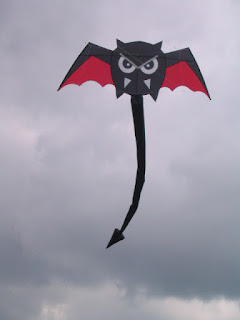 You may or may not be aware that we have a Flying Wings VampDevil quad kite in our quiver. Not as precise as a Revolution, but a fun kite to fly, with a really great presence in the sky. We actually flew a little 'off the cuff' demo with this kite at Malmesbury Kite Festival two years ago. What has always been in the back of my mind was to get a second one, so we could fly them as a pair. VampDevils come in many different colour schemes, and ideally we'd want one which is the mirror image of the one we already have, i.e. red where ours is black, and black where ours is red.

To make a long story short, we finally succeeded in getting exactly that VampDevil, with thanks to Karl Longbottom.

So here's our second VampDevil! Isn't it a cutey? 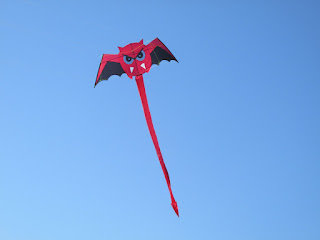 For pair-flying, we decided to swap the tails around. Increases the contrast of the kites, and so the presence in the sky. They really look fantastic together! 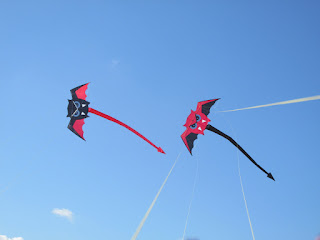 As I said above, they're not as precise as Revolutions, but we had no problem flying simple patterns with the two: follow-ons, infinities, parallel circles, wraps, synchronous wingtip turns, etc. 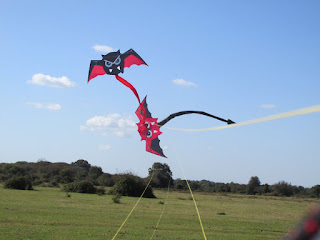 Windwise, their official wind range is 2-15mph, but I'd say they do need at least 4mph to have decent drive. 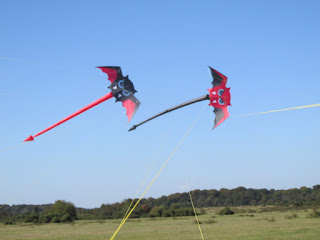 We're not planning on choreographing a specific routine for them, at least not for now. But the plan is to fly them at festivals, as and when the wind allows, and making up the routine as we fly. And the music we want to use for them is The Love Crave's cover version of 'Thriller':

You know the saying that some things are like buses? You wait for one for ages, and then three show up at the same time? Doesn't just apply to buses; applies to kites as well ...

I was aware of the existence of a 1970s Peter Powell-like kite made by Mettoy Wembley, called 'Red Arrow'. Plastic sail, partly transparent and with a red silhouette of a jet plane, extended nose, and a plastic tube tail to simulate a smoke trail. I kept an eye out for one for ages, but without any luck, until one showed up on eBay, which I did indeed win. Within a week or two, Allan Pothecary, of Close Encounters fame offered me a bunch of vintage kites on permanent loan, and that bunch included a stacked pair of Red Arrows! So within a couple of weeks, my collection of Mettoy Wembley Red Arrow kites went from zilch to three. Given what we normally fly, we were more interested in flying a pair than a stack, so I disconnected the stack, added red and blue tube tails, and off we went trying out the single Red Arrow I got off eBay ... 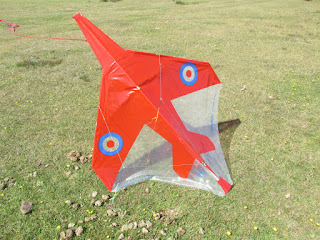 ... and the front Red Arrow from Allan's stack 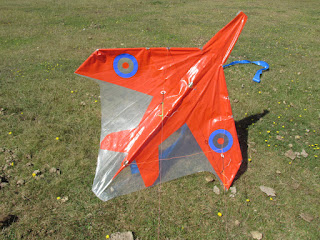 We first flew both separately, to get a feel for their flight behaviour. As you might expect, they're pretty heavy kites for their size, so need a decent breeze to fly well. When the wind drops, they tend to stall, and become harder to turn. Essentially, not different from an old Peter Powell. 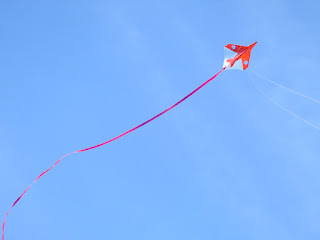 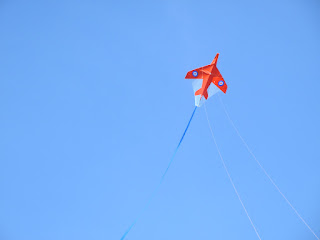 And of course we had to fly them together! At that point, the wind started to drop away, so we struggled to fly patterns and formations, but they will be fine in stronger winds. Thanks, Allan! Obviously, I can't have a blog post about Red Arrows without talking about the 'other' Red Arrows, which gave the kites their name in the first place. Especially because not long after we flew our Red Arrows, we were treated to a 20+ minute truly awesome Red Arrows display over Southampton Water! Unfortunately, we didn't have our Red Arrow kites with us at the time (would have been fun to have both in the air at the same time!) 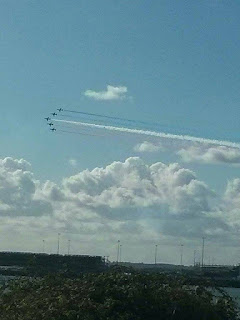 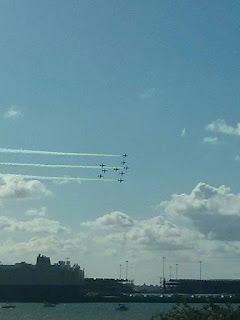 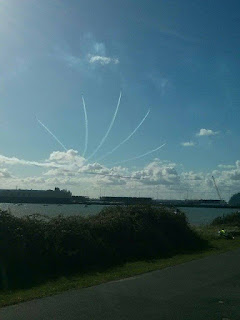 What made the Red Arrows display even more special for us is that there are definite parallels between what they do in their jet planes, and what we do when we fly in a kite team: tight formations, wraps, and even star bursts!

The 2015 European Sport Kite Championships took place on September 4-6 in Dunkerque. Unfortunately, because of work commitments, we couldn't go there and support our fellow flyers and teams. Hope we can make it to the next EuroCup (and maybe even compete one day??).

In the meantime, how did the UK competitors do?

In dual-line team, Flame took the bronze medal, silver went to Cerfs-Volants Folie, whereas the gold went to Start'Air (who retained their 2013 title).

In the quad-line team competition, there were no UK competitors, Now'Air took the title, with the silver going to SBananator. As there were only two entries, there was no bronze medal.

In dual line individual, Bryan Beasley came sixth. The competition was won by Matthieu Mayet, with Stephen Versteegh taking the silver, and Julien Lahyani the bronze.

So France did really well overall, taking gold in five of the six categories, and snatching 9 of the 17 medals. Italy took one gold, and four medals overall, the Netherlands and the UK shared the remaining four medals between them.

Keep an eye on the EuroCup's Facebook page; full results and videos of some or all of the ballets will hopefully be posted soon.
Posted by flyingfish at 21:48 No comments: