As I mentioned in my introduction to L-katz, two other members of the team (Roger and Tony) also fly separately as a pair. It wasn't until their début at the Southampton Kite Festival, when the PA got a bit confused announcing them (L-katz? Part of L-katz? Just 'Roger & Tony'?), that they realised their pair needs a separate identity, just like the Flying Fish pair has a separate identity from the larger L-katz team. You see the same with several of the UK top teams: when some of their members also fly and compete as a pair, this pair often has a name different from the team.

So here's introducing Wings on Strings, with Tony in #1 position and Roger at #2! 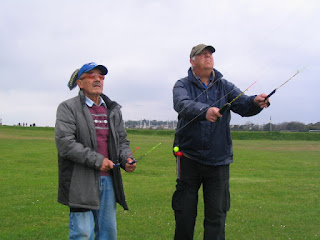 They have been flying together for something like five years, but it wasn't until late last year, when it became clear we would all be flying at the Festival, that they started getting serious about putting a specific routine together. 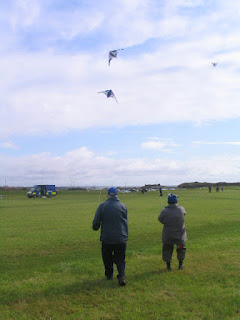 At the Festival, they really nailed their routine. Of course, Irma and I have seen them practice their routine many many times, and, in my personal opinion, their Festival routine was among their best runs. Everything flowed, everything clicked. So well done, guys! Post-Festival, the aims of Wings on Strings are, first of all, to keep polishing their current routine, and then start thinking about putting an entirely new routine together.

Incidentally, the music that Wings on Strings fly their current routine to is "Apache", by The Shadows.


A phrase often heard when they're flying together is "Don't wave your kite about!", to which the reply then goes along the lines of "Shut up, Tony, you talk too much - were you vaccinated with a gramophone needle??". But believe me, they're good friends!

Roger is also a keen kite photographer, and is in the process of setting up a web-site dedicated to his kite-related photos.
Posted by flyingfish at 08:00