Our final kite festival of the 2019 season was a new one for us: Bognor Regis. It also was the first 3-day festival we flew at, providing us with two 'firsts'.

Weather over the August bank holiday weekend was gorgeous: warm and sunny. Over the three days, the wind gradually dropped, starting off at 7-12mph on Saturday morning, and ending up at 0-4mph for most of Monday. Fortunately, whenever we flew, the wind was at least fly-able (though only just on Monday afternoon). Really big open site, which meant that whatever wind there was, it was quite smooth. The large arena was split into a dynamic and a static half, which worked fine.

We were given two one-hour slots each day, to fill as we saw fit. First up in each of the slots was Flying Fish, flying two routines. On Saturday and Sunday, we flew our technical routine to "Ruthless Queen" and our new competition ballet (to "War of the Worlds"); good to have a bit more arena practice for both of these prior to the final round of the Nationals the following weekend. On Monday, due to the almost absent wind, we switched to two make-it-up-as-we-go-along routines, to "Ivo" and "Rise like a Phoenix". As to kites, we flew Airdynamics T5 Taipan ultralights, KiteTec Impulse ultralights, and Airdynamics T5 Cubans. 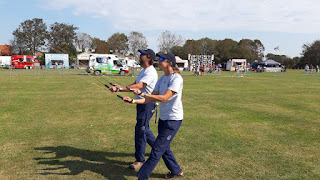 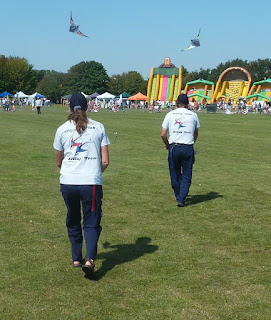 Twisted Bridle, our 'sister pair', then took to the arena, and flew their established "Fly Away from Here" routine as well as their new routine for this festival season ("Familiar" by Liam Payne). As you're probably aware, we've been coaching them from the start, and I'm immensely proud of what they have achieved since taking up the sport less than two years ago. 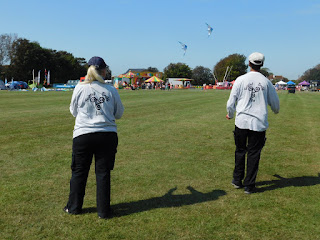 Flying Fish then returned to the arena, joining Twisted Bridle to form L-katz. We flew our standard team routines for this season ("Can't Stay Away from You", our competition ballet; and "Targaryen Theme" to which we basically flew our technical team routine). Starting off with flying Tribord R244 kites first, we switched to Airdynamics T5 Cubans when the wind dropped. 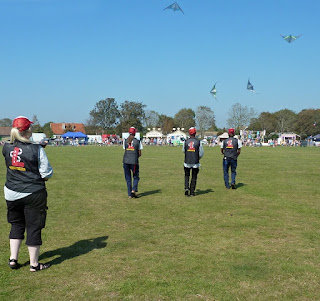 On Sunday, Simon Franks joined L-katz for an extra mini-mega-team performance, and he also flew on his own in a later slot, flying two kites. 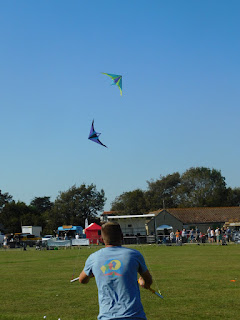 And I really should mention Jaiden, who, at only 9 years old, is already becoming a festival regular, following arena performances at Basingstoke and Brighton. I really wouldn't be surprised to see him flying at the National Championships in a few years time. 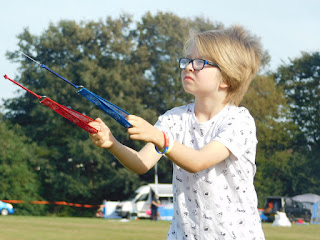