The wind forecast in the run-up to Portsmouth was dire ..... unfortunately they proved correct: the wind turned out to be so strong that events up and down the country were cancelled. St Anne's Kite Festival was one of the victims, and where Portsmouth was concerned, the Saturday was essentially cancelled (meaning flyers could put up kites if they felt it was safe to do so, but there would be no scheduled programme).

On Saturday morning, most invited flyers attended the pilot's meeting, and some then tried to fly at least something. With winds gusting up to 55mph, we didn't dare risk any dual-liners, but did put up our pair of Gibson Girls. 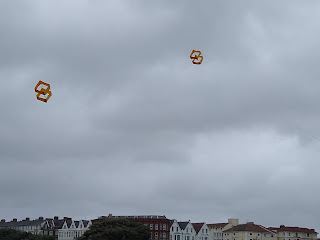 Being single-liners, they can't be steered, so our pair-flying of 'GGirls' consisted of the kites being in the air, while we 'walked' various patterns on the ground. Surely the most bizarre pair routine we've ever flown at a festival! Flying single-liners does make a 'selfie-while-pair-flying' a lot easier! 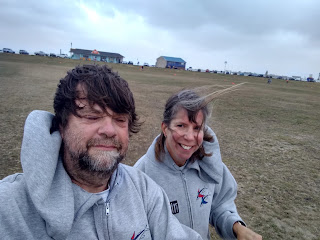 On Sunday, the winds had more or less halved (mostly 20-28mph), which meant that an almost full programme could be run (the main victims were the dragons, of which a blaze was originally planned). Coming over the water, although still pretty strong, the wind was pretty consistent, so actually not at all bad to fly in. One issue was that the PA system was downwind from the flyers, and didn't have enough power to overcome the wind ... more on that a bit later.

Which pairs and teams were appearing in the arena? First of all, the Dunstable Downs Old Gents, flying a new routine. 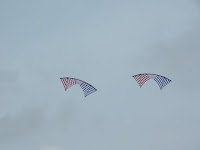 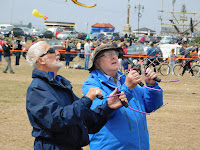 Team Spectrum was of course present, flying their familiar series of routines. 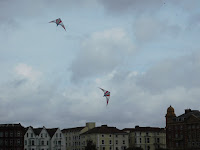 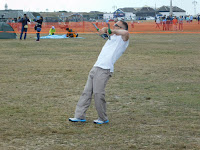 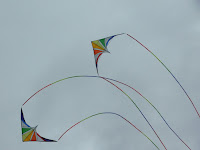 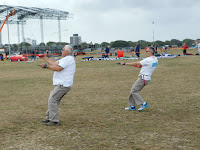 And The Decorators featured, as usual, both with a 6-strong team, and with various guest flyers. 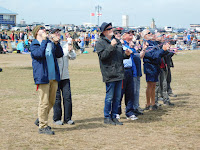 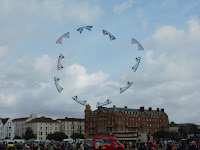 As to Flying Fish, the wind was perfect for our Airdynamics T5 V2 (patches off, but no brakes necessary), but we did struggle with the PA not having enough power. It's difficult to fly to music if you mostly can't hear the music! Still we tried, and flew our 'Ruthless Queen' and 'Rise Like a Phoenix' (following its debut at Basingstoke) routines. 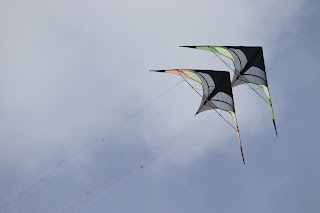 The first of our two 'Ruthless Queen' routines had to be flown entirely without music due to the PA system packing up temporarily. So we simply flew out technical routine as we have it now. 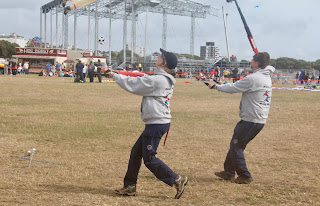 Conditions were definitely challenging, especially on Saturday and, for us, the 55mph gusts on Saturday were definitely the strongest winds we're ever encountered at a kite festival. But thanks to the efforts of Gill and Jon, there was at least an organised festival on Sunday, and all invited flyers simply did the best they could under the circumstances. There is talk of having "I flew at Portsmouth 2019" t-shirts printed ....

More pictures of the festival (most from Sunday, but some from Saturday) are here.

Picture credit of Flying Fish: Marian Linford (the fantastic picture of our V2s in a refuel!) and Franca Perletti