For well over five years now, Flying Fish has flown a full competition set of Airdynamics T5 kites, from the XUL Cuban to the mega-vented V2. We bought this full set when we decided to start flying competitively back in 2014, and the main reason we settled on the T5s is because they really fit our flowing style of flying. They have really served us well: we won the Experienced Class three times with T5s, were promoted to Master Class with them, and in 2018 became National Champions with T5s.

Whereas 'flowing' is our natural style of flying, for several reasons (feedback from judges at the national championships being one of them) we wanted to expand our style into a more 'straight and snappy' direction. And this meant we were on the look-out for an additional set of team kites, which would help us do that. Not as a replacement of our T5s, but in addition to. Any excuse for some new and shiny, right?

Looking at options, there aren't that many team kites on the market that come in a full set (from XUL to mega-vented). Plus we were limited to Europe, essentially. High shipping and import costs would simply make anything coming from the US or Asia far too expensive for us.

We had the opportunity to try a few candidates, but didn't quite click with them (and, in one case, didn't click at all). Nothing against the kites (and that's why I don't mention them by name); they just weren't suitable for us.

Just as we were running out of options, Josh Mitcheson told us that he was designing a set of team kites. Would we be interested in trying out some prototypes, giving him feedback, and so help him create a new UK team kite? Uh, yeah! Of course, as is the case with the Airdynamics kites, having a set of kites from the UK has the distinct advantage that the designer/builder is relatively close by in case of damage or any other issues.

To make a not very long story even shorter, we received kites from Josh to test, gave him feedback, received updated versions, and the prototypes evolved into the kites that are now on the market. Meet the KiteTec Impulse! As you would expect from a high-end team kite, the main materials used are icarex and Skyshark.

As I write this blog post, four versions of the Impulse are available (two more are in development; a bit more on that later): ultralight, standard, mid-vent and full-vent. We had fun playing with the colouriser, coming up with kites that all sported green or orange flashes (the distinguishing colours on our T5s; Lex = green and Irma = orange) but with white, light grey, dark grey and black panels such that they gradually become darker as you go from ultralight to full-vent:

So here are our four pairs of Impulses on the ground and in the air!

Ultralight, rated for winds between 4-14mph. 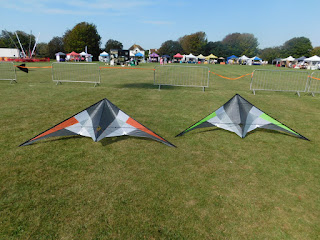 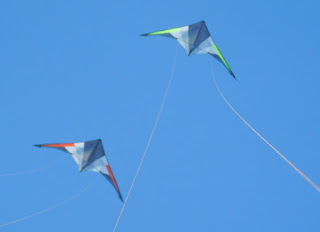 Standard, rated for winds between 8-21mph. 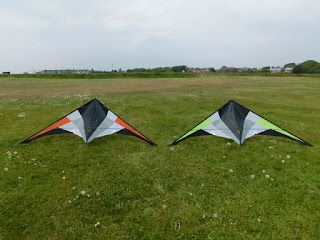 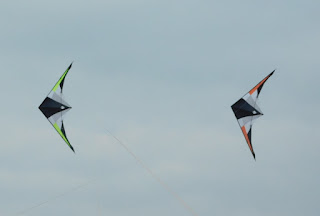 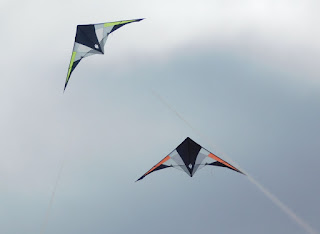 Full-vent, rated for winds of 18+mph. 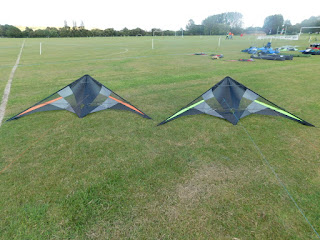 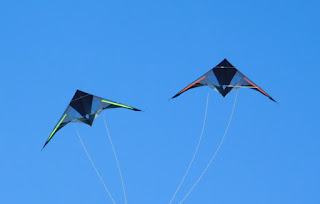 The reason I didn't talk about the flight characteristics of each version separately is because they feel the same. That's a first positive aspect of the Impulses: you don't have to change the way you fly switching from one kite to another when the wind goes up or down. They also have a lot of overlap in terms of wind range, which is another positive in my book. The Impulse is designed to flex, and I mean flex a lot; much more so than the T5. This helps evening out flight speed in blustery wind, as some of the energy in the gust is absorbed by the kite flexing; positive number three. They're also noisy, again helping to slow down and even out speed a bit.

Impulses show straight flight and crisp corners, with no oversteer or wobbles coming out of a corner. Axels and half-axels are deep and slow, and also quite forgiving. Landings are snappy, and refuels easy. Bunch more positives; to be honest, we haven't come across anything negative in terms of how they fly and handle. They do handle differently than our T5s, but not that differently. Relatively small adaptations to input are all that's needed.

When we tested out prototypes, we did so with our sister pair, Twisted Bridle. They also have the four Impulse pairs currently available, which means that, with our L-katz team, we have a full set of identical team kites (which hasn't been the case up to now).

I mentioned two more version being in development. First of these is an XUL; we have flown several prototypes, which didn't quite do what we need them to do. Josh is working on ironing out these issues, and hopefully we can add a pair of XULs to our Impulse quiver soon (yes, colour scheme is already decided upon; lighter than the ultralights).

The other version under development is the Hydra. I've been asked not to spill the beans yet on this one, but if it does what it's meant to do, it will be an interesting and exciting kite to add to our (then) 2 x 5 Impulses; watch this space!

Bottom line: as you probably gathered by now, we're very happy with the KiteTec Impulse. We really click with the kites and they allow us to expand our flying style into a new (for us) direction. Having them alongside our trusted Airdynamics T5 kites gives us more options. For a flowing routine, possibly with tails, we'll definitely put a T5 on the lines; for a more straight and snappy routine, an Impulse will likely be first choice.