If you have followed our blog over the years, you may remember that Brighton was the first kite festival to give us an arena slot as invited flyers, back in 2012. Keep that Brighton debut in mind; I'll come back to that ...

Brighton wouldn't be Brighton if it didn't present us with some challenging conditions. Saturday was a gloriously warm and sunny day, with very low (0-3mph) and often thermal winds in the morning, and more steady 4-8mph winds in afternoon. Sunday was drizzly for about three quarters of the day; winds were 2-6mph. All pairs and teams present struggled with the wind, and each of them suffered kites falling out of the sky more than once.

The arena programme was very much focused on dual-line pairs and teams, more so than in previous years. So, without further ado, here are the pairs and teams flying in the arena: 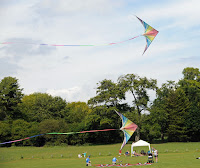 Following on from their Brighton debut last year, Twisted Bridle flew their Aerosmith routine as well as a new routine to completely different music. Good to see them varying their performances (yes, I know I'm biased ...)

Skytracks performed in the arena in their second festival appearance, following their debut at Bridlington. Due to technical glitch, routines in their first slot had to be flown without music, but fortunately, the problem could be sorted for their subsequent slots. Great to see a new pair coming on the scene. 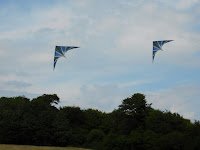 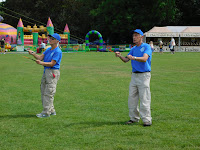 As Flying Fish we used the opportunity to practice the technical routine we use in competition, with musical background ("Ruthless Queen"). Given the very low (and often nearly absent) winds, we decided on our "Ivo" routine for our second routine of the slot. This is one we debuted at Basingstoke last year: a 'make it up as we go along' routine for very low winds. The start is choreographed, but we then basically jam it. As the end of the music approached I decided at the last moment to try refuel landing. We'd never done this before, never even practiced it, but I thought what the heck ... didn't tell Irma what I was planning, to prevent her overthinking it. Just called for a refuel as the kites went up, turned the kites down as soon as the refuel was locked in place, and went for it. And we did it!! Really chuffed with that and another kite flyer referred to it as an 'awesome landing'. 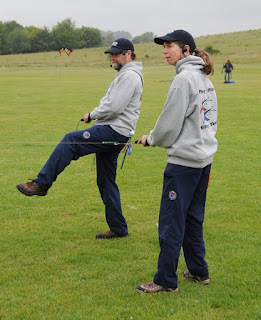 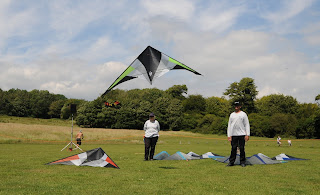 Twisted Bridle and Flying Fish present at the same festival of course means that L-katz flew. We flew our standard two festival routines, to Gloria Estefan and the Targaryen Theme. 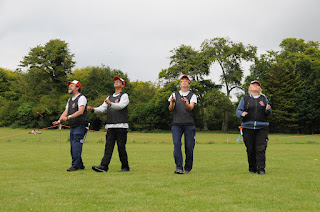 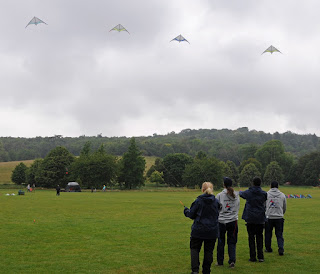 L-katz also joined with Skytracks at the end of the dual-line team block on Sunday. No pictures have as yet surfaced from this 'Sky-katz' mega-team.

Even though there was a clear emphasis on dual-line pair/team-flying, there were other performances in the arena: Paul Thody flew his massive Flexifoil Stacker 6 stack ... 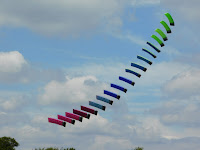 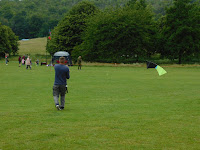 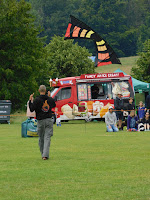 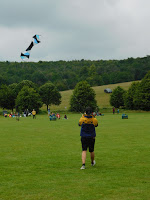 More pics of Brighton Kite Festival are here; note the giant Pegasus! I usually pick out something specific towards the end in these festival blog posts, and I want to highlight Jaiden here. Following his arena debut at Basingstoke last month, where he flew in the 'mystery ballet', he was now given two full display slots, flying his own routine to music. Nine years of age, but he showed maturity beyond his years; the future of sport kite flying lies with kids like this! 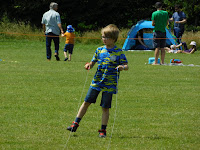 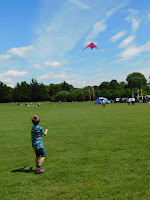 So Jaiden had his full arena debut at Brighton, as did Twisted Bridle last year, and Flying Fish in 2012; clearly, Brighton is fertile ground for debuts!.