The Stranger Level 7 is one of the weirdest sport kites around. I'm sure anyone who has flown one will agree with me that it's in a category of its own. On top of generally being mad as a bag of ferrets, it has the tendency to, all of a sudden; decide to fly towards you ... yes, you read that right! And with your lines getting slacker and slacker, there's nothing you can do until it decides to behave again ...

Quire early on in our kite-flying journey, I had the opportunity to add a SL7 to my quiver, and I felt I just had to get it, had to get the experience of flying it; or rather attempt to fly it .... Well, I had that experience, ticked the box, and our 'retro' SL7 is not a kite that is out of the bag a lot ... 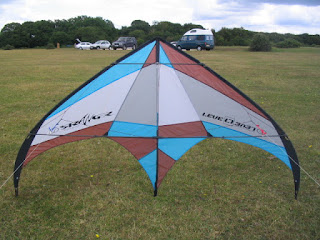 Fast forward by quite a number of years, and someone on the Fractured Axel forum posted that he had a SL7 and would give it away to the highest bidder in a rather unusual auction: "That's right, I'm not interested in monetary bids: you bid with the number of times you promise to fly it before it ends up in your attic." Staying in the spirit of things, I put in a crazy bid, saying that we would fly a pair of SL7s in formation at least three times. Maybe I should have expected it: I was the only bidder ... Week or so later, we had a second SL7, in the 'mango' colour scheme. 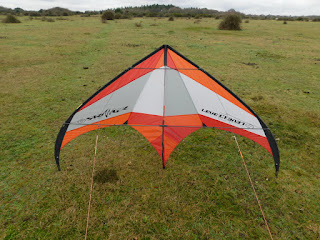 So here's the pair of SL7s on our flying field, with me thinking "what did I get myself into ...." 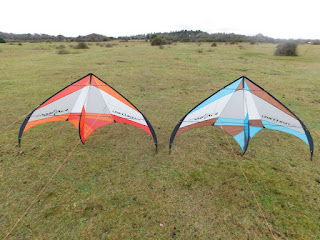 But we actually flew them together! And I even managed to take a picture while doing so. Of course, they had their moments when they were bored with flying in formation, and decided to do something utterly different ... 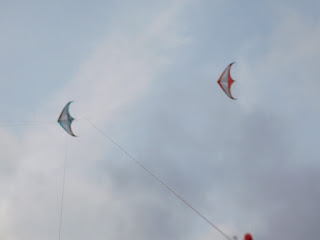 Apologies for the kites not being in focus; I was pleased enough to fly them and at the same time get any picture of them together!

Next time we got the SL7s out, we played a bit more with bridle settings, as the first time we flew them they weren't perfectly matched. 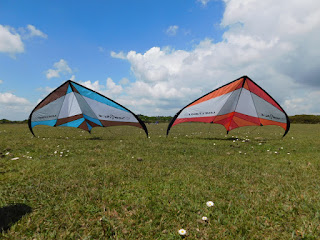 Second time flying them together did work out a bit better (read: a bit less mental), and I managed to get a better picture this time. 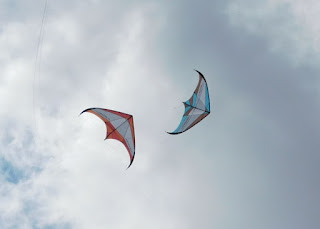 I promised three times, didn't I? And I guess I have to up the ante in terms of evidence, so here's a brief video taken while flying (with the aid of a headband mount for my phone); at least they behaved during that video!


It definitely was a crazy, mad, bonkers idea in the first place, but I secretly enjoyed fulfilling our initial promise. Don't expect us to fly a pair of SL7s regularly at festivals, though! 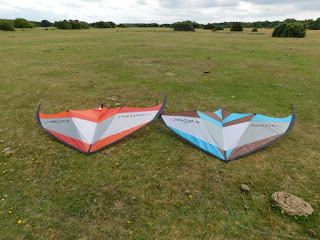