No Fear? No Fear!

No Fear is an American clothing, sports, and lifestyle brand. As part of their promotional activities, they have in the recent past marketed a dual-line 1.90m wing span sport kite. I have flown one once, and it was an awful kite to fly: the far-too-flexible fibreglass frame makes it shudder rather than fly. 'No Fear' kites really have taken on the status of 'worst kite ever' among the UK sport kite community. I know of one member of that community who bought one at an auction, purely for the satisfaction of then stamping on it and chucking it in the bin ...

So why oh why am I blogging about 'No Fear' kites??

Well, if you have followed our blog over the years, you know that we like to try out pair-flying kites which really aren't designed for pair-flying. Just for the fun of it! And as 'No Fear' kites regularly pop up on eBay .... you see where this is going, right? Would Flying Fish be brave enough to pair-fly 'No Fear' kites? Or would we fear 'No Fear'?

I reckon you know the answers to those rather rhetorical questions .... 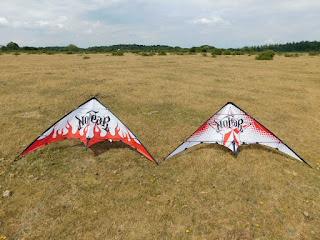 Here's our pair of 'No Fear' kites! Of course, putting them on the ground next to each other and taking a picture is one thing; flying them quite another. We flew them on 30m lines, thinking it might give us a bit more control than on our usual 45m lines. 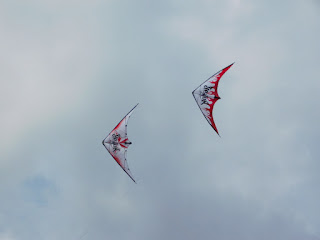 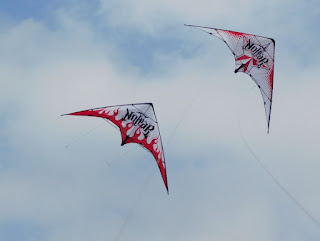 They're not exactly team kites! As I said above, the frames are very flexible, and they really don't like anything sudden. Flying sharp corners just doesn't work as the frame flexes too much. Try to fly an axel or half-axel, and you can almost hear the kite scream "What? How am I supposed to ...???" before flapping down to the ground. We flew them in 7-12mph winds, and as soon as the wind speed reaches double figures, the wing tips start shuddering quite badly.

But we did it; we pair-flew 'No Fear' kites!

Two things: first of all, there is a slightly more serious angle to this: you don't need £200+ custom-built team kites to have fun flying pair; you can do that with much cheaper kites (as we showed with HQ Yukons), and even with the 'worst kite ever' (though I certainly wouldn't recommend the latter). Secondly, Flying Fish is part of the L-katz team, and there are six different 'No Fear' sail designs that I'm aware of ... Has any sport kite team in the world ever flown 'No Fear' kites? I expect the answer to that is a resounding 'NO', and for very good and obvious reasons. Still, it has to be done ..... watch this space!